A rare encounter with three Peter Sellers B shorts: the rare Cold Comfort and nearly lost Insomnia is Good for You and Dearth of a Salesman.

This May Day saw the screening of two long-mislaid films featuring British comic actor Peter Sellers. The two 30-minute pictures were made in 1957, and are completed by a third film; altogether making up the only films finished of an envisioned lengthier set to be known as the ‘Bestsellers Series’.

Like the newsreels or public information films they travesty, and the short subject films of Laurel and Hardy that inspired Sellers, the films would once have screened discretely as a pre-show to a feature presentation. This month, for the first time, they were programmed back-to-back for the opening gala of this year’s Southend-on-Sea Film Festival.

How Southend came to screen the shorts is epilogue; their rescue nearly 20 years ago by Robert Farrow, former employee of the films’ producers Park Lane Films, is the real story. Thinking to use to them to store his father’s cine films, Farrow fished the sealed film cans from a skip during a refurbishment, and made the discovery: Insomnia is Good for You and Dearth of a Salesman, unseen since their general release. Farrow approached other festivals and film institutions before commending them to Southend-on-Sea festival director Paul Cotgrove, who has digitally remastered the films from the 35mm prints.

Nevertheless, the hosting Odeon in this minor coastal town, with its 1½-mile pier eructing into the mudflats of the Thames estuary, felt a fitting location for the premiere: partly because the actor was born to vaudevillian parents, whose variety show toured Britain’s provincial theatres and tendered Sellers’ his stage debut at two weeks old; partly because the films are idiosyncratically English, each using real footage – of bowler-hatted men on their way into work; of men and women in ticketed deck chairs – to set the scene.

But most of all because the series dates to a littoral period in Sellers’ career, when he wanted out of England. His radio show, The Goon Show – with Spike Milligan and Harry Secombe – had by that time spent two-thirds of its life, and Sellers was hoping to capitalise on a well-received supporting performance in Alexander Mackendrick’s The Ladykillers (1955) to launch a film career. The ‘Bestsellers’ were intended for a showreel, and stop short when the opportunities they were meant to catch up caught up with the soon-to-be Hollywood star.

Appropriating an accent learned from his father, a plumper Sellers plays Yorkshireman Hector Dimwittie – a character consistent to all three films, though nonspeaking in Cold Comfort (the third of the completed Bestsellers trio). Narrated by Sellers, Cold Comfort advises how to hang onto a cold; a parody of the Public Relationship Films their founder Richard Massingham made famous. Massingham’s droll but sincere Coughs and Sneezes (1945), which he also narrated and sneezed in, could well have been source material:

Contrastingly, Cold Comfort’s narrator congratulates Dimwittie, “our demonstrator”, for having “strung out his cold for 56 man hours”. “Gesundheit,” he extends, “the most beautiful word in the English language.” A lovely micro close-up of a white pill rolled between Dimwittie’s fingertips shows his fingerprints – and is later confused with a mothball, identical, which he swallows.

This short shows off Sellers’ skill for physical comedy, and is early sign of his interest in silent film. It far precedes the sophisticated slapstick of his Inspector Clouseau in The Pink Panther (1963) that accidentally doused the spotlight on David Niven’s titular jewel thief. His final collaboration with director Blake Edwards – The Party – Sellers had wanted to be silent, after the example of French comic Jacques Tati and his Monsieur Hulot’s Holiday – and would have been vastly improved had it been so. 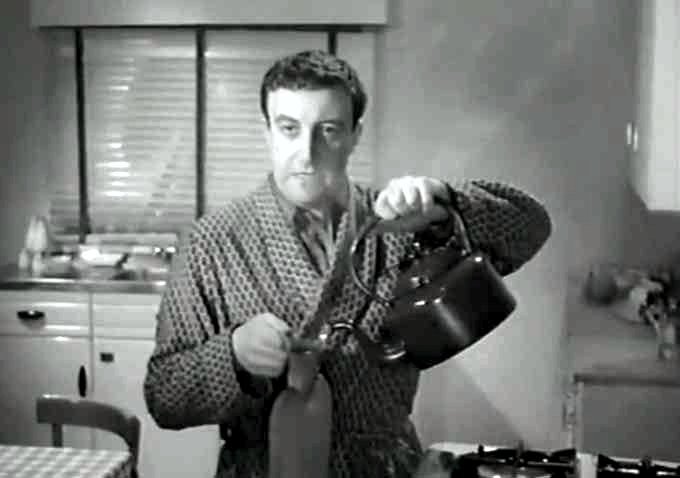 Funnier still and taking the same format is Insomnia is Good for You, the second screening at the May Day gala. Writers Robert Popper and Peter Serafinowicz would produce something similar to both these films with their Look Around You television series of 2002: an eight-set of nonsense ‘modules’ that lampooned the educational science videos shown in schools in the 1970s and 80s.

Insomnia documents Dimwittie’s development of a case of sleeplessness, which has its source in a meeting his boss has called for “first thing Monday morning”. Dimwittie gets the willies after deciding to use the appointment to request a raise in pay; the film is narrated as if he cultivated the disorder in the recommended way. An amusing triptych of reconstructions gives a window onto his imagination as he incrementally embellishes the memory of the Friday’s exchange with his boss, inferring layer upon layer of menace into his boss’s tone and countenance while the wording of their dialogue stays unchanged. By the end, Sellers’ eyes are on stalks, and, stuck for a line of a memorised poem, knocks at the neighbours’ in the middle of the night: “You’ve got our Belloc in your flat.”

Dearth of a Salesman, the most plot-driven, is a vehicle for Sellers’ talent for mimicry. The actor tries on multiple voices as the everyman takes to door-to-door sales in the hope of a bigger wage packet. So unnatural a salesman is he, he’s hired instead as ‘Sales Resistor’ to bar the way for bogus salesmen who would fleece his rich employer.

The shorts join a list of films recovered in recent years that includes The Death of Poor Joe (1901), discovered by the BFI’s Bryony Dixon and becoming the oldest known Dickens title; a musical-comedy short called Hello Pop! (1933) featuring the Three Stooges, found in Australia last year; Hollywood director Edwin Carewe’s Ramona (1928), which was reclaimed in Prague and had its restoration premiere two months ago at the UCLA Film and Television Archive; and George Pearson’s Betty Balfour vehicle Love, Life and Laughter, one of the BFI’s 75 Most Wanted, which turned last month in Amsterdam’s EYE museum.