A square. A screen. A stage to the world

Bridging Iran and Hollywood with a screening of Asghar Farhadi’s The Salesman on a rainy Oscar night in Trafalgar Square, the UK seemed open to complexity, community and connections. 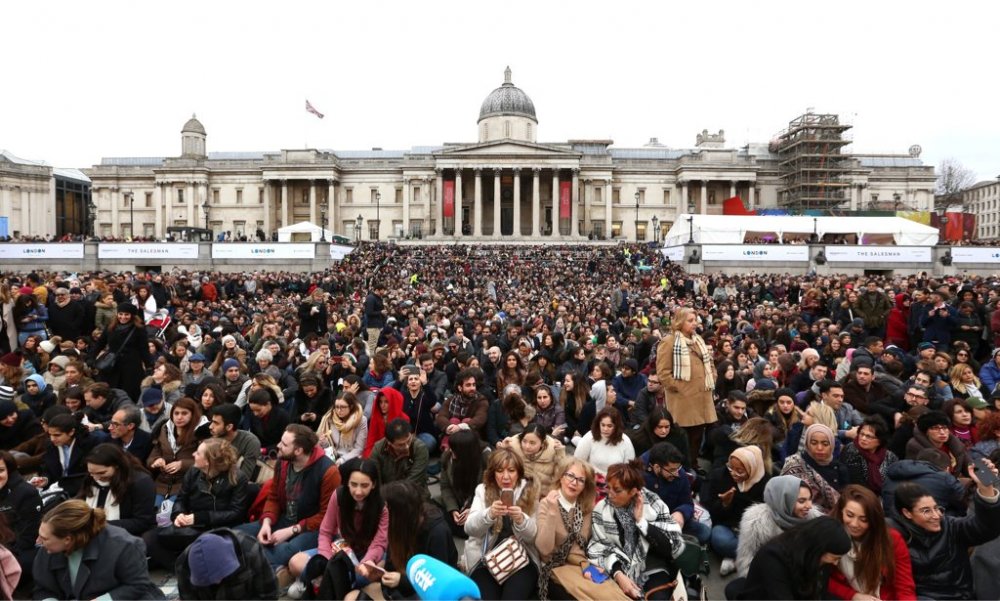 The audience for the Mayor’s screening of The Salesman on Trafalgar Square, London, 26 February 2017.
Credit: @LDN_gov

London could have used some of Los Angeles’ sunshine on Sunday 26 February, but what Trafalgar Square lacked in clement weather it made up for in celebration of Asghar Farhadi’s seventh film, The Salesman. At a public screening organised by producer Kate Wilson, filmmaker Mark Donne and actor and activist Lily Cole, with support from Mayor of London Sadiq Khan, around 10,000 viewers defied the chilly wind and rain to cheer, whistle, sing, clap and share taut silence as Farhadi’s subtle moral drama filled the big screen at the south end of the square.

The Salesman is on regional release in UK cinemas and on Curzon Home Cinema from 17 March 2017.

A few hours later, it won the Academy Award for Best Foreign Language Film: a second for Farhadi (after his win for A Separation in 2012), and third for Iran. Two distinguished Iranian-Americans – engineer Anousheh Ansari, the first Iranian woman in space, and NASA scientist Firouz Naderi – took to the stage to accept the award on Farhadi’s behalf, after the director and lead actress Taraneh Alidoosti boycotted the ceremony to protest the US administration’s ban on travellers from seven Muslim-majority countries:

The screening in London was conceived as a response to the ban, and had something that Los Angeles did not: an appearance by the filmmaker himself, albeit by video link from Tehran. He saluted acts of “solidarity” in the face of “oppressive political powers everywhere”:

The speech read out by Ansari at the Oscars was similarly pointed, calling the US President’s divisive policies “a deceitful justification for aggression and war”. It was the most directly geopolitical speech of a night that – whether in London or Los Angeles – pressed what some might call (and have called) division, and others an urgent solidarity, as the film, the screening and the awards ceremony all asked: which side are you on? And how do we maintain complexity and community in the face of that question?

The banner above the screen framed the event with the Mayor of London’s hashtag #LondonIsOpen. Speaking a month earlier at special effects company Double Negative, Khan had sought to counterpose Trump’s travel ban with an invitation to filmmakers feeling unwelcomed by the US to look to London, which he planned should become “the world’s most film-friendly city”. At the same time, he worried that Brexit threatens commensurate risks to the UK film industry’s flows of talent, noting “how diverse our [British] film ecosystem is”.

“Trump can’t silence me!”, Khan joked on the night after overcoming ‘technical issues’ with his microphone. The following speakers – Cole, journalist and presenter Mariella Frostrup and director Mike Leigh – all referred to diversity as key to the UK creative industries. Leigh, who called Farhadi the greatest living Iranian filmmaker, noted that they had met serving together on a Berlinale jury in 2012, gesturing to the global film industry’s dependence on freedom of movement for all.

The Salesman begins with walls falling down – the walls of the apartment where Emad, a teacher, and his wife Rana are living (it’s been compromised by illegal construction). From such seismic beginnings unfolds a story wherein small acts create powerfully unsettling impacts, as the couple’s search for a place to live brings them up against both an unfamiliar working-class community and the hypocrisies within their own middle-class circle, particularly the cast of a production of Death of a Salesman in which they are both acting.

The play is presented with a minimalist set on a thrust stage, so there are ostensibly no walls. But the film’s final sequence makes palpable the invisible barriers between and within individuals. It cuts between front medium close-ups that show Emad and Rana separately getting their hair and make-up before going on stage to play Willy and Linda Loman. With no establishing shot of the backstage space, it’s unclear whether the shots represent the eye-line match that the editing creates, or if the characters are even in the room at the same time. They are connected and disconnected simultaneously, held together and apart by the shot, and by their (unequal) complicity in the events of the preceding scenes. 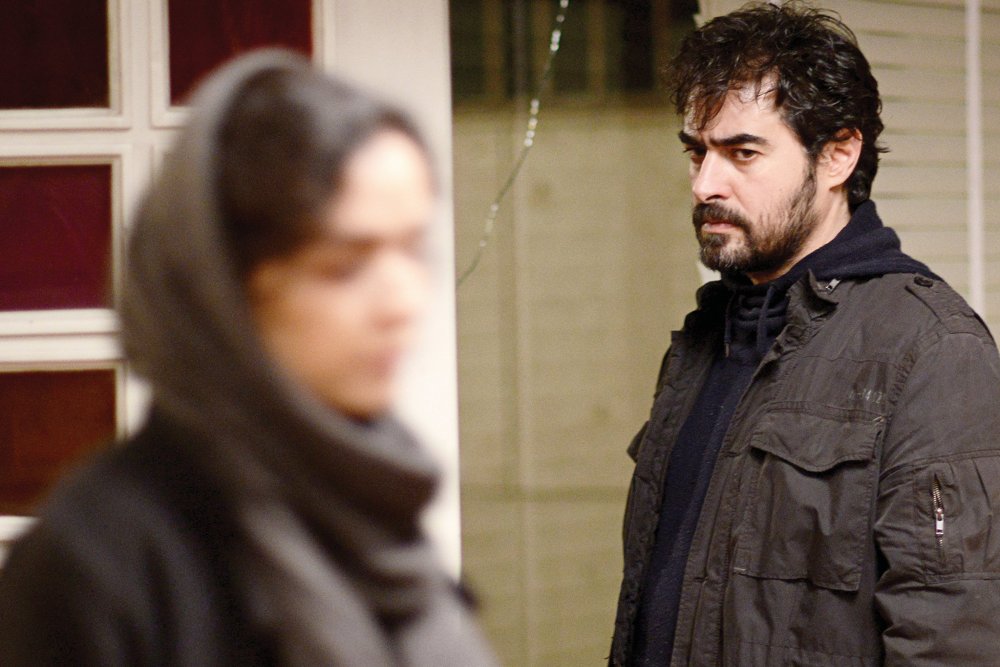 It’s a typically elliptical construction from Farhadi; as in the magnificent street scene overlooked from a glass elevator in his third film, Fireworks Wednesday (2006), an apparently transparent point of view is revealed as opaque, and a density of ethics and emotion is handed over to the audience. That Trafalgar Square was still full when the credits rolled suggests that subtlety and empathy persist among viewers hungry for stories of ethical, as well as narrative, complexity. Both The Salesman and Barry Jenkins’ Moonlight, which won the Best Picture Oscar, explore the way that both violence and tenderness leave their marks in ways that require openness from the actors and openness from the audience.

The Salesman re-stages a play-within-a-film, while both Moonlight and Fences, for which Viola Davis won Best Supporting Actress, began as plays (by, respectively, Tarrell Alvin McCraney, who won the Best Adapted Screenplay Oscar, and August Wilson). While stage musicals have provided a steady source of Hollywood adaptations, plays by contemporary American playwrights (Wilson died in 2005) are far more rarely adapted to the big screen (although Volker Schlöndorff directed a garlanded 1985 TV adaptation of Death of a Salesman). As Farhadi’s staging of Death… shows, the theatrical stage puts actors and audiences in a space that is at once proximate and distanced, single and double, which is good for troubling borders and bringing down walls.

Ten thousand living bodies in the live weather of Trafalgar Square responded to the livewire act of performance conveyed by The Salesman, to its exploration (parallel, although different, to Moonlight’s) of how theatre can break space open by bringing us together. Perhaps awards ceremonies retain their power because of a similar element of liveness, of bodies together in a room, reacting and feeling. The emotions and attention expressed in Trafalgar Square last Sunday aren’t enough to change the anti-migrant policies being made up the road in Westminster, let alone across the Atlantic, but the event showed the power of life and art intersecting to put bodies on the line, both onscreen and in the screening space.

Related to A square. A screen. A stage to the world