From Allonsanfàn to Padre Padrone, Night of the Shooting Stars to Caesar Must Die, Vittorio and his surviving brother Paolo distilled their country’s post-war convulsions with a weightless eloquence and imagination. 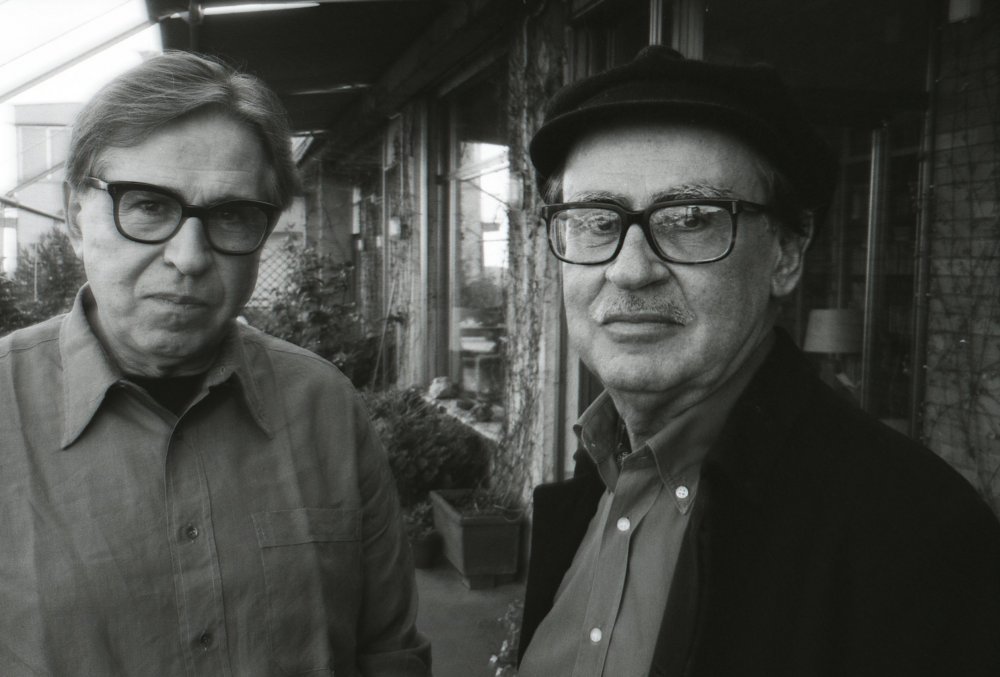 He lived and worked long enough to see his country rise from the ruins left by Mussolini’s criminal regime only to swing once more towards fascism. In between Vittorio Taviani, who died aged 88 on 15 April, along with his brother Paolo experienced and most importantly captured on film the paradoxical fate of a nation stuck between modernism and tradition, brilliance and imbecility, overflowing with beauty yet plagued by the squalor of conformism.

As it was difficult throughout their career to tell where the work of Vittorio finished and that of Paolo began (Marcello Mastroianni used to call them individually “PaoloVittorio”), so it is now impossible to mourn the death of Vittorio without feeling the loss of their cinema as a whole. Their fraternal synergy was reflected in their work: artistic documents drafted by two proactive witnesses of history, conscious of the role each of us plays in its unfolding saga. Exemplars of the golden era of Italian cinema, their films worked as seismographs detecting key social and political harbingers. The experience of war and the resistance against fascism would leave a permanent mark on the brothers’ films. Their first short documented the destruction of their native San Miniato in Tuscany at the hands of first the Germans and then the Allied forces. 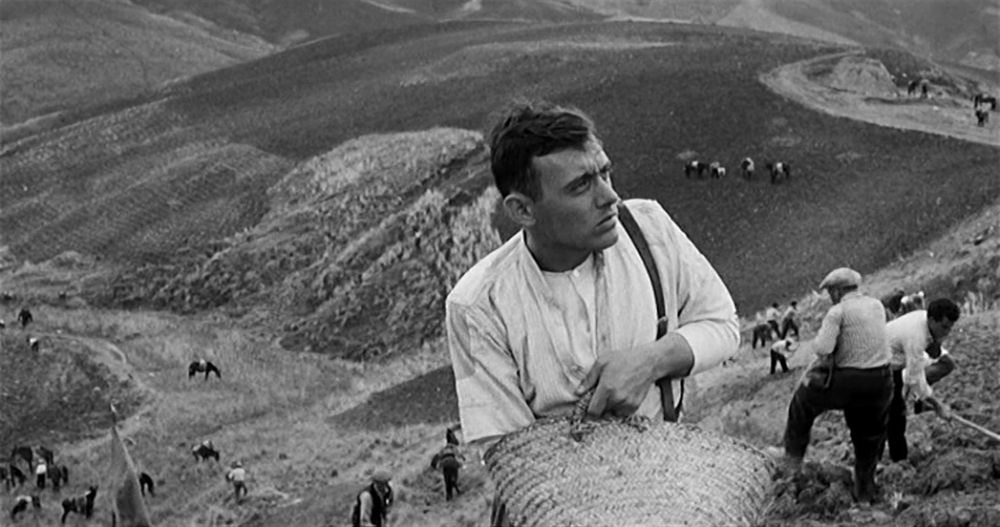 Their cinematographic baptism was officiated by none other than Joris Ivens, with whom they worked on Italy is not a Poor Country (1960), a documentary about the country’s oil and methane deposits financed by Italian state-owned oil company ENI and then banned by RAI, the national broadcasting corporation. Naturally influenced by neorealism, to which their feature debut Un uomo da bruciare (1962) is visibly indebted, the two brothers would soon distance themselves from its reconciliatory tones and manipulative naturalism. Firstly by exploring the political yearnings of the new generations determined to reject the paternal order of a society they were not looking forward to inherit. Secondly by making every one of their films, even the less accomplished, always unpredictable, interspersed with irony and surreal interludes.

In 1967’s surreal I sovversivi they sensed the symbolic significance of an epochal event, the death of the historic leader of the Italian Communist Party, the Stalinist Palmiro Togliatti. The death and impending funeral of this cumbersome political figure is recounted by following a disparate group of people and observing their unswayed relation to the events. The film intercepted the incapacity of the old communist guard to contain, let alone channel, the impetuosity of the younger generations that would soon deflagrate in the face of the establishment. 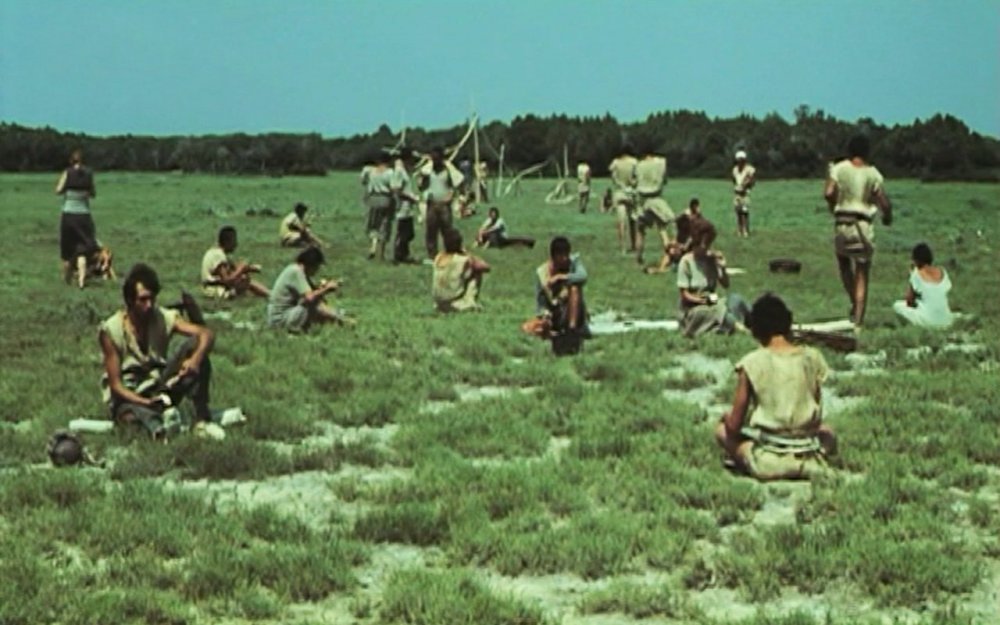 Sotto il segno dello scorpione (Under the Sign of Scorpio, 1969)

As the long Italian 68 threw its weight over the barricades into the extrema ratio of armed struggle, the Taviani brothers were among the very few filmmakers to chronicle these revolutionary attempts without either idealising them or demonising them. Their analytical equitability was partly due to their cinematic strategy. Instead of opting for social realism or agit-prop, the weapons of choice for political filmmakers in the 70s, the two brothers decided to allegorise the present through historical dramas. Sotto il segno dello scorpione (Under the Sign of Scorpio, 1969), Saint Michael Had a Rooster (1972) and Allonsanfàn (1974) represent some of the most lucid examinations of that inevitably fallible process known as revolution.

Tellingly, the rhetoric and didacticism that usually plague political films are nowhere to be found in their work, which manages to combine profundity with drollery. The historical distance separating the events of the time from their archetypical counterparts allowed the brothers Taviani to approach incendiary issues with measured discernment. 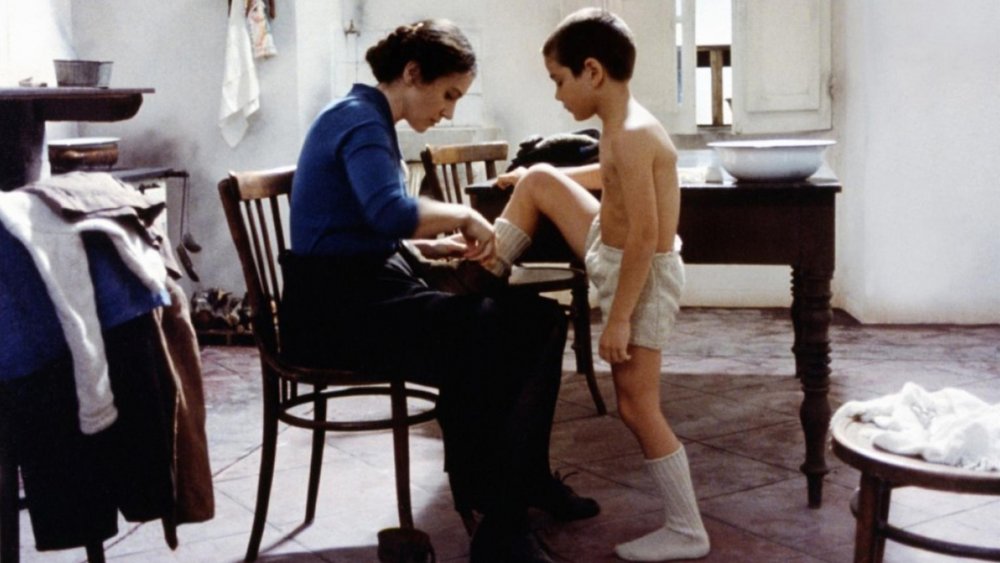 In 1977 came their biggest hit, Padre padrone winning the Palme d’Or in Cannes. The film is based on the eponymous autobiographical book by Gavino Ledda, the illiterate son of a Sardinian shepherd who managed to flee his cruel father andbrutal life via self-education. Far removed from the romantic visions of peasantry of say a Pasolini or an Ermanno Olmi, the film avoids miserabilism and even offers some irreverent humour. While a boy is having sex with a goat we get to hear the inner monologue of the poor animal: “I’m gonna shit in your milk,” she swears in revenge.

The fire of revolt had exhausted itself by the end of the 70s, and with Il prato the Taviani brothers filmed one of the most terse and unsentimental epitaph ever dedicated to the end of an era. The film also marked Isabella Rossellini’s debut in a leading role. 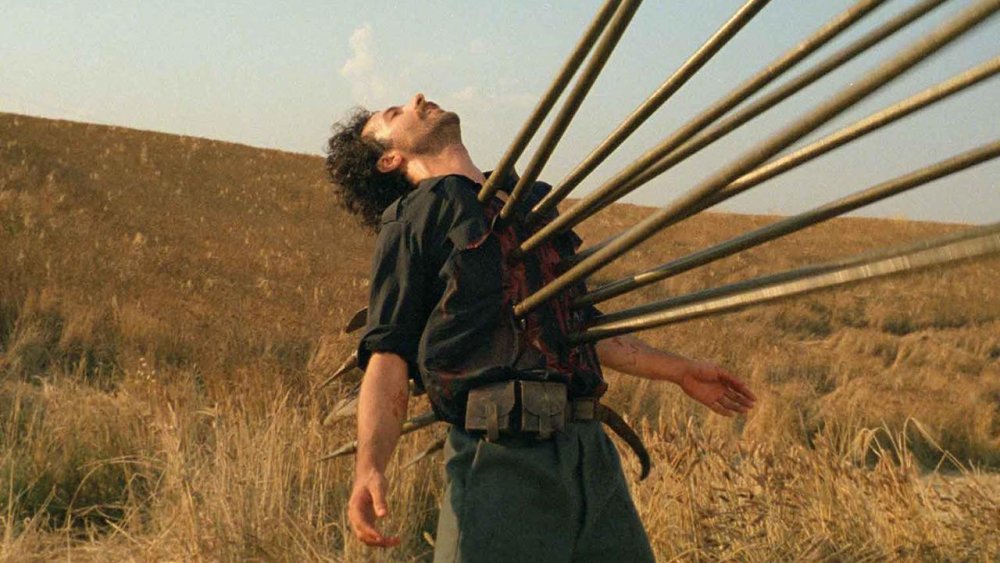 Night of the Shooting Stars (aka Night of San Lorenzo, 1982)

While most Italian directors from the golden age struggled to remain relevant after the 70s, the 80s were a vital period for Paolo and Vittorio. Night of the Shooting Stars (aka Night of San Lorenzo, 1982) harks back to their first short film, an oneiric deception of the evacuation of a town in Tuscany toward the end of WWII when the Allied Forces had invaded to liberate Italy from the German occupation. This film best exemplifies their unique ability to bring together terror with fantasy, violence with poetry, moral outrage with buoyancy. The nightmare of war is sublimated, without making it banal, into a fairy tale about the absolute and desperate necessity to stay human even in the darkest times.

In 1984, with Kaos, which was awarded a Golden Globe for Best Film, the Taviani brothers realised one of their grandest achievements. Based on Pirandello’s work, the film exceeds its already outstanding literary source, to conjure a cinematic space of weightless eloquence in which the famous comic duo of Ciccio & Franco (in their last onscreen appearance together) deliver the performance of a lifetime. In the middle of a very difficult decade for Italian cinema, the Taviani brothers refined their craft to near-perfection. 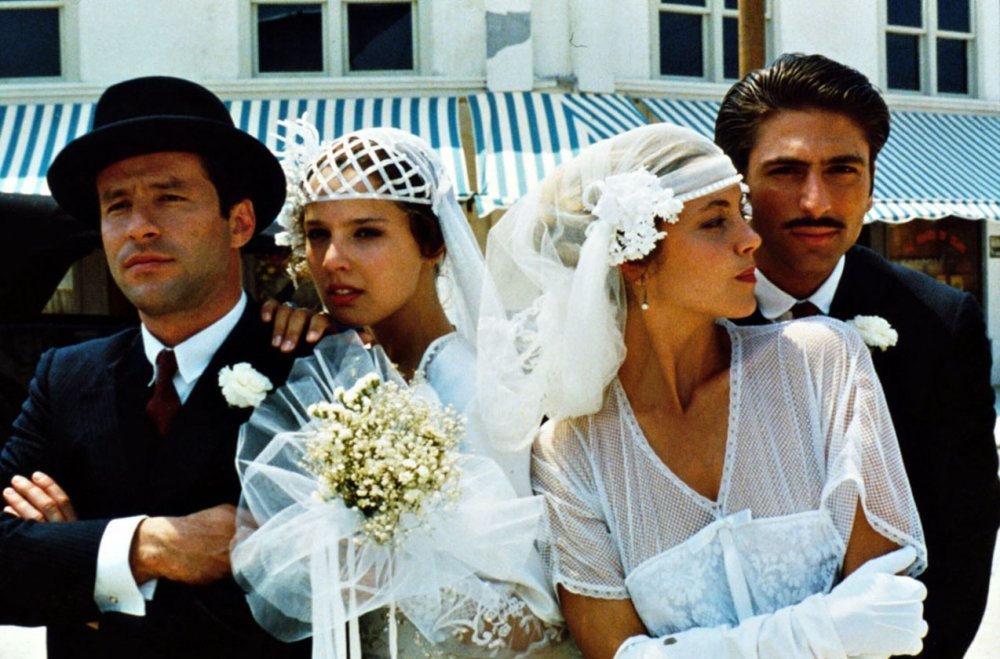 Not even old age put a stop to their creativity. After very solid films such as Good Morning Babylon (1987), about two Italian immigrants in America who end up working as set designers for D.W. Griffith, and the Goethe adaptation Selective Affinities (1996) with Isabelle Huppert, they signed their artistic testament with Caesar Must Die (2012). Awarded the Golden Bear at the Berlinale, this incredible docufiction about the staging of Shakespeare’s Julius Caesar in a Roman prison incontrovertibly proves the expressive vitality of the two brothers, already in their 80s. The film demonstrates the possibility for art to literally overcome even the most cruel of human institutions: it’s a touching testament to the emancipatory urgency of freedom.

Interviewed by the Italian daily Corriere della Sera on the day of Vittorio’s death, Salvatore ‘Sasà’ Striano, one of the inmate actors in Caesar Must Die, declared that “we lost a guardian of freedom… Vittorio took the ‘criminal’ label off of me. I owe him everything, everything.” The highest achievement for a film director? Certainly for Vittorio Taviani, whose generous smile and undisguised humanity we will all miss very deeply, especially his brother Paolo, who is now left alone in the director’s chair. 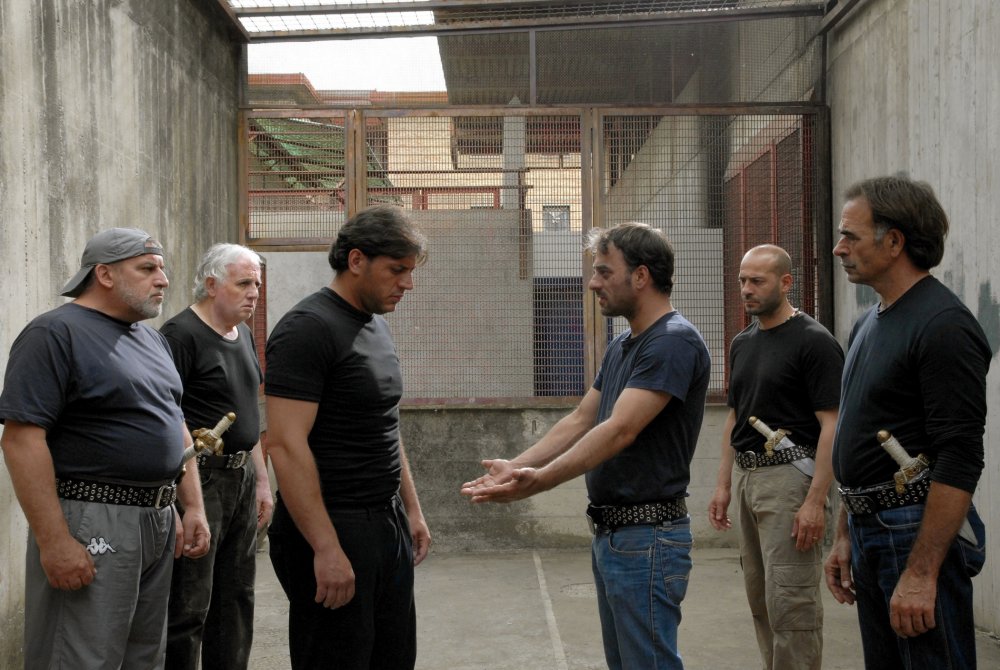