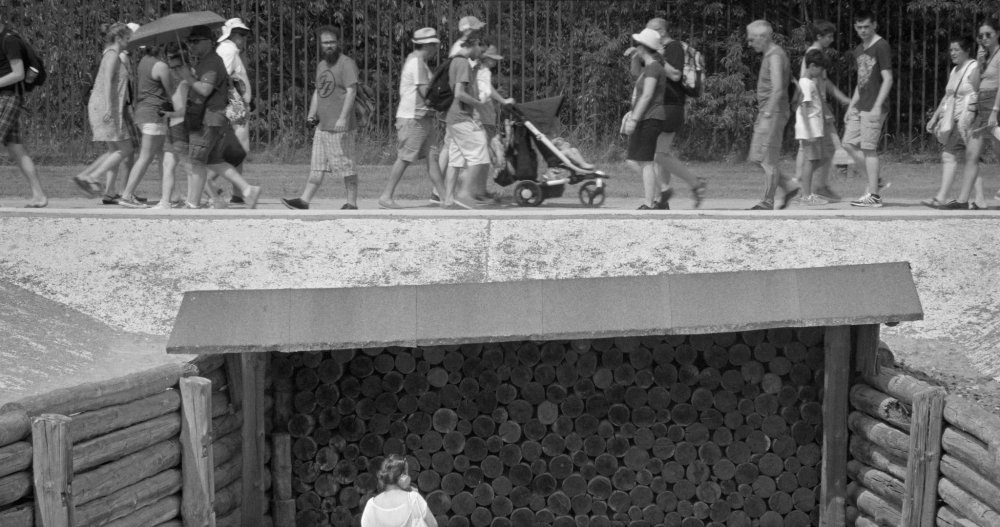 Sergei Loznitsa has a deceptively simple way of constructing a resonant documentary: he and (in this case) cinematographer Jesse Mazuch carefully set up cameras in the most effective positions around a public space and let them run, not caring if they’re noticed – the place in question here being the one-time Sachsenhausen-Oranienburg concentration camp. We saw the same approach used in his Ukrainian protest documentary Maidan, but where those images were in colour and often favoured an epic framing appropriate for crowd action, here the shots are all monochrome and more tightly framed, though the subject is still, at bottom, crowds and their behaviour.

Here the crowds are tourists engaged in that queasy activity of visiting a site of horror: important things happened there, and the desire to visit such unimaginably horrific places is, it seems, hard-wired into us. Camera positions are set at a respectful distance, and are not interested in the exhibits themselves (except, in one case, some incineration ovens), but only in the behaviour of the people visiting. Moral complexity emerges straightaway. As dozens of people move in and out of rooms and are glimpsed disappearing into and emerging out of darkness like ghosts you can’t help but imagine the prisoners the place was created to accommodate, torture, punish and murder: political prisoners, Russian soldiers and German ‘traitors’, amongst others.

As a viewer, you’re also immediately tempted to sit in judgement of individual behaviour amongst the crowds. When, for example, a beautiful and frail young teenage girl gets her portrait taken in front of the iron gate that bears the infamous legend Arbeit Macht Frei at its centre, one may shiver at her lack of understanding and disrespect for where she is and what happened there, but if you do you’re also, in your own way, grading the worthiness of human beings. The shambling hundreds here, with their audio guides clamped to their ears, looking bored and lost and sometimes inappropriately playful do at times invite contempt. It’s extraordinary how the promotional T-shirts and cargo shorts of holiday dress make us all look so anonymous in our supposed individualism – why do the predominantly young people here dress so casually when they’re going to such a place? Is it because their education is yet to come? 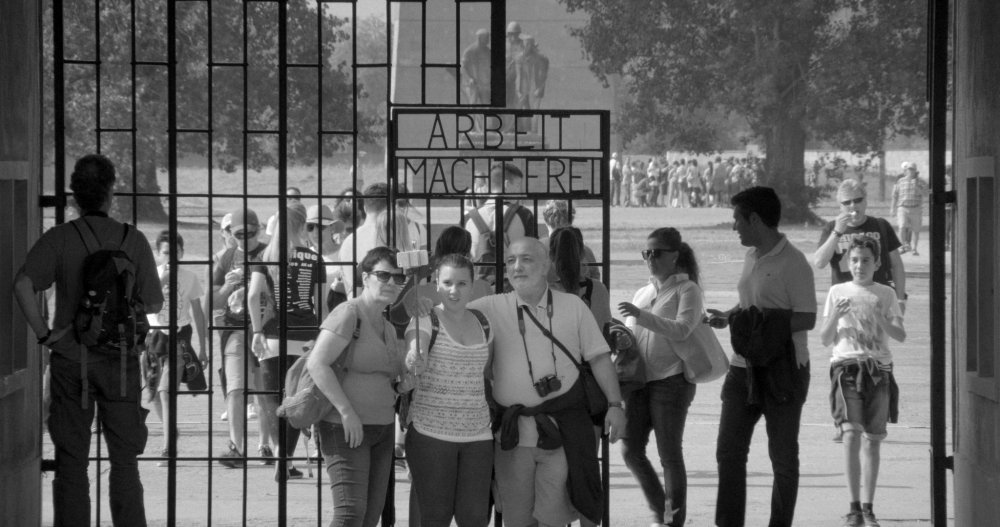 Austerlitz suggests it is (the otherwise inexplicable title, by the way, is said to be a nod to W.G. Sebald’s book of that name). As we gradually get to eavesdrop on the remarkably trenchant tour guides who fill in the grim historical background – with the microphones picking up camera bleeps and passing phrases from somewhere within the range of each deep-focus shot – we can see that the place does have a sombre, sobering emotional effect on many. The sequences of images themselves had me wondering if any were set up: especially when you get very pretty people walking into a shot that seems so beguilingly backlit, but I believe it’s all accident. What one collects by the end is a rounded portrait of humanity, and, somehow, one of hope, despite the ghastliness of human crimes and the need to revisit them.