Looking backwards, moving forwards: 10 of the best at Sci-Fi-London 2018

This year’s festival contains a paradoxical set of films that merge progression and retrospection to mind-bending effect, from the imaginatively unhinged mind games of Nothing Really Happens to movies exploring retrofuturism, resurrection and regression. 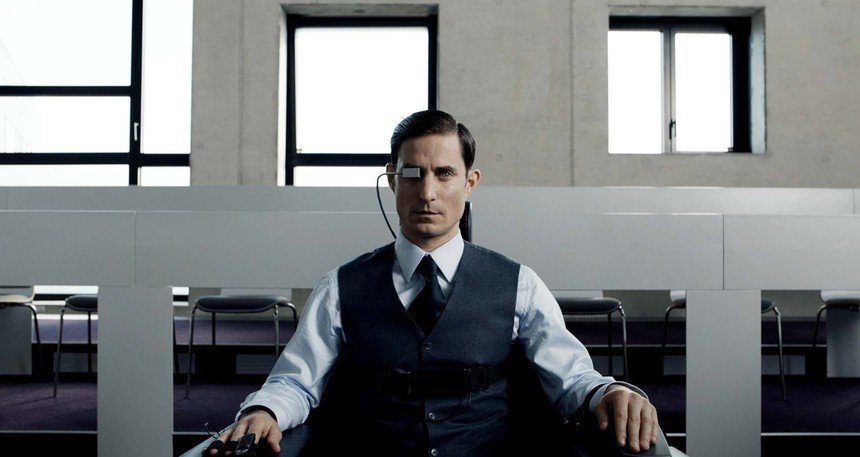 Even the most forward-thinking of genres still builds its future visions on the foundations of the present and the past. And so the common, if loose, thread running through all my picks from this year’s SCI-FI-LONDON Film Festival is retrospection: the paradoxical notion that progress often comes from, or overcomes, the drive to look backwards.

The 18th SCI-FI-LONDON International Festival of Science Fiction and Fantasy Film runs 1-7 May 2018 at Stratford Picturehouse.

Word from a Gamer

In this age of plug-in consoles, virtual reality and online multiplayer adventures, the elaborate analogue strategy campaigns, trading cards and ‘roll’ play of tabletop gamers might seem quaintly passé. Steve Wollett and Ryan Callaway’s affectionate documentary Word from a Gamer is not just a sympathetic insiders’ view of this retro community, but also shows it to be the same, mutatis mutandis, as any geek culture.

We see a parade of converts and conventions celebrating this marginalised activity, and hear players and designers extolling the mental workouts, escapism and social opportunities afforded by tabletop gaming, while questioning their demonisation by the religious right in the 80s and their more general dismissal by outsiders. Meanwhile, we can also see a mirror, however refractive, to the sort of genre fandom that festivals such as SCI-FI-LONDON seek to accommodate and perpetuate. The point of crossover is clinched by the film’s closing credits, notably presented in a receding Star Wars-style crawl. Sometimes you have to look back to see yourself.

Closer Than We Think

The festival’s other documentary – and one of its best films – is Closer Than We Think, which, in tracing the life, death and works of now obscure commercial artist and cartoonist Arthur Radebaugh (1906-74), explores the paradox of a man who, though always striving to see ahead, ended up left behind.

Radebaugh’s illustrations, whether his prewar magazine covers and ads, or his postwar cartoon series (Can You Imagine and Closer Than We Think!) for the ‘Sunday funnies’, were determinedly forward-looking, offering a “techno-Utopian vision of the future”, and earning him the label “imagineer” – but as his own chosen medium of draughtsmanship and painting fell into disfavour, so did his vision, even if today’s reality has in certain respects caught up with his imaginings (which themselves reflected the Cold War ideology of their own time). Compiled from interviews and archival materials, Bonowicz’s film uses Radeburgh’s tragic trajectory from progressiveness to redundancy as a launching pad for more general discussions of futurism’s fragility.

If Radebaugh’s brand of futurism has since become retro, Hitz’s moodily compelling Hidden Reserves (Stille Reserven) opts for a more straightforward kind of retrofuturism. For as it unfolds its story of a shadowy undercover agent, a nightclub chanteuse, a doomed love affair and a corporate conspiracy, we find ourselves in the sort of noirish dystopia familiar from films like Blade Runner (1982) – even if the setting is a future Vienna, where the bodies of uninsured debtors are kept in a vegetative state for organ harvesting, data storage and child-bearing surrogacy. 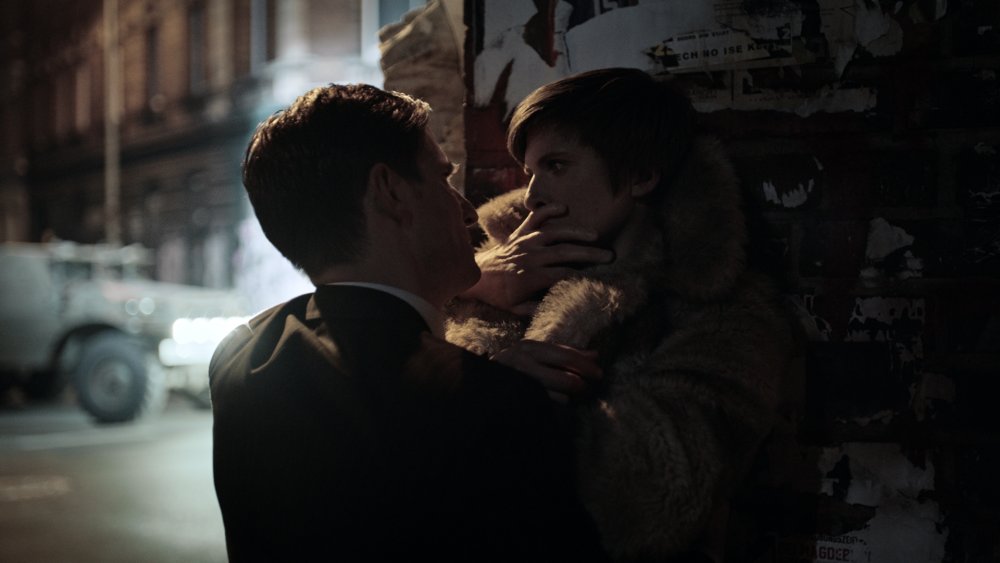 It is a system which insurance agent Vincent Baumann (Clemens Schick) works to uphold, and which singer-activist Lisa (Lena Lauzemis) seeks, with illicit acts of euthanasia, to bring down – but as romance blossoms between this unlikely pair, Hitz offers a bleak vision of a world not unlike our own, ruled by social division, exclusive healthcare provision and underclass exploitation.

The retrofuturism in Dominican director Valdez’s Peaches (Melocotones) captures visually the inner psychology of the protagonist. Somewhere in the Caribbean, in a future marked by tech that is strictly, absurdly analogue in nature, fussy designer Diego (Peter Vives) is always looking backward. Hoping to reignite a relationship that has long since lost its spark, he takes his sceptical girlfriend Laura (María Guinea) back to the now derelict motel where they first met three years earlier – and then after jerry-building a time machine from a prototype sex aid, ends up repeatedly retracing his steps in order to win back Laura not just from love rival Sandro (Joaquín Ferreira) but from proliferating versions of himself.

A loose reimagining of Hugh Sullivan’s The Infinite Man (2014) with the parallel timeline paradoxes of Nacho Vigalondo’s TimeCrimes (2007), Peaches steeps its comic romance in a reconstructive nostalgia that reflects its hero’s stasis in an ultimately irrecoverable past. There is also a reflexive comment here on how easily genre can get stuck on repeat in its own historical traditions, struggling to break the cycle and move on to something genuinely surprising and (re)invigorating.

What Peaches does with time, The Gateway does with space. While experimenting with teleportation (as in David Cronenberg’s The Fly, 1986), a recently widowed scientist (Jacqueline McKenzie) accidentally opens a portal to a parallel universe – similar to her own if not exactly the same – and finds her husband (Myles Pollard) there, still very much alive and also recently widowed himself. She brings him back to the family that she is desperate to rebuild, only to discover that he is not the man he used to be.

Merging the multiverse confusion of James Ward Byrkit’s Coherence (2013) with the resurrection-gone-wrong sensibilities of Mary Lambert’s Pet Sematary (1989), The Gateway risks sacrificing its sci-fi set-up to the lazier trappings of slash and dash, but eventually respools the film’s initial premise in a neat twist ending. It is also a cautionary tale, suggesting both the attraction and the ultimate impossibility of ever truly going back – a peculiarly self-referential message for a film so set upon reviving familiar genre scenarios.

Quint (Henry Ian Cusick), the obsessive protagonist of Haeems’ festival opener, is also desperately trying to bring his family back together through his pioneering research, even though it was precisely his work that had previously driven them apart. A biologist and geneticist, Quint pushes the boundaries of both science and ethics in order to save his two children from the genetic condition that has left his wife – whose stolen body he keeps in his private laboratory – in a permanent coma.

Updating both Mary Shelley’s Frankenstein and Henry James’s The Turn of the Screw (whose characters’ names and ambiguous ghostly presences are liberally reappropriated here) to a near-future age of stem cell research, xenotransplantation, cryptobiosis and genetic hybridisation, Haeems’ involuted narrative engineers haunting domestic tragedy from hard science, revealing that the path to immortality is paved with immorality.

“Can’t we start again?”, Dr Adam Anderson (David Lewis) asks his grief-dazed wife Marie (Tammy Gillis) some way into Ray Raghavan’s feature debut Violentia. Adam is not seeking to rewind so much as to erase, or perhaps to reinvent, their tragic past, even as he works on memory nanobots which, when combined with the associative inhibitors developed by his colleague Dr Rachel Porter (Emily Holmes), can reprogram violent people (such as the one who murdered Adam’s daughter). As Adam tries to alter the mindset of a sadistic psychopath (Scott Lyster), his professional and personal lives prove more intimately connected than he can grasp.

An associative riff on the themes of Wim Wenders’ The End of Violence (1997), Stanley Kubrick’s A Clockwork Orange (1971) and Douglas Trumbull’s Brainstorm (1983), Raghavan’s film is a twisty affair, playing out its morality drama (concerning the limits of free will and state control) on an ambiguous stage where people’s memories, real or manufactured, can be viewed “like a movie clip” – making them difficult, crucially, to distinguish from the texture of the film’s own constructed reality.

There is also a disrupted family at the centre of first-time writer-director Berger’s The Astronauts’ Bodies (Die Körper der Astronauten), which depicts a widowed, alcoholic father Michael (Lars Rudolph) and his three children all essaying to blast off from their dysfunctional stasis, with their own corporeal physicality serving as the vehicle of their attempted excursions. While the eldest son Anton (Béla Gabor Lenz) joins a terrestrial programme to test the effects of long-term space travel on human musculature, his twin sister Linda (Zita Aretz) embarks on her first sexual relationship with a young man whose addictions make him not unlike her father –  and Michael himself stops eating, bathing, even breathing (but not drinking). 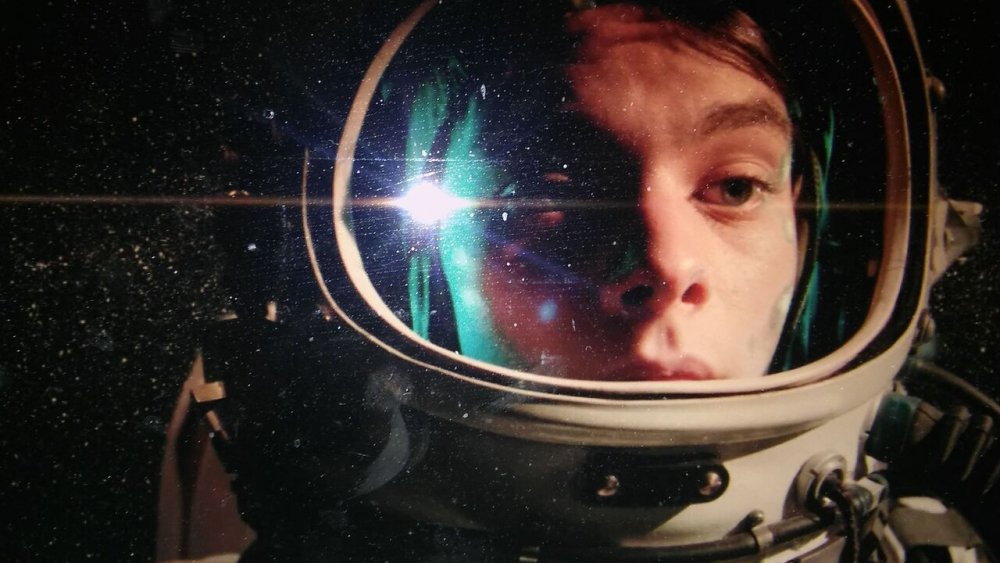 The result is less science fiction than a metaphor drawn from it: a peculiar family portrait whose characters, though all lost in their own space, never stray far from their immediate earthbound environs (except in flights of fancy). As such, they are both pioneers and prisoners of their own biological boundaries.

Mercado’s feature debut is primarily named for the constellation, some 37,000 light years from Earth, which young astronomer Fabián Ocampo (Jorge Luis Moreno) is observing in the hope of learning more about an unidentified object in its vicinity; yet secondarily the title puns on the altitude sickness that often afflicts those who visit the Large Millimetre Telescope, situated 4,000m above sea level in Mexico’s Sierra Negra.

The double meaning of the title is also the pivot around which the film’s central ambiguity is organised. Is an alien presence trying to cover up the interstellar signal that Fabián has detected from near Cygnus, and willing to commit murder to preserve its secrets? Or has Fabián lost his mind in the rarefied atmosphere of his heightened elevation, becoming a danger to all around him? It is a paranoid tale of a man looking back at cosmic data from many aeons ago and far, far away, and finding reflected in it a dark mirror of himself and his own crumbling psyche.

“Oh, you’re at a crossroads,” says store clerk Behth (Anna Tran) in my favourite film from this year’s SCI-FI-LONDON. Behth is expertly diagnosing the condition of her customer, mattress store owner Dave Stimple (Adam Edwards), as he purchases his first-ever packet of cigarettes at the age of 30. Dave is clearly undergoing an identity breakdown, and looking for change. “I’ve been a passenger to my life,” he complains, as he struggles to rekindle his long-stagnant relationship with wife Jess (Lindsay Gustin), and to be understood – or even just noticed – by anybody else. Dave’s every conversation – with his weird brother-in-law Carl (Joseph Gaham), with neighbour Randy (Bobby Dornbos), with employee Miguel (Sami Ismail) and with Behth – seems to involve a profound lack of connection.

What’s more, there is, beyond Dave’s pre-mid-life crisis, something off-balance about his world. You can see it in the spelling of Behth’s name, in the sudden appearance – some 47 minutes into the story – of the film’s ‘opening’ titles, and in the visual glitches that keep fragmenting the very presentation of Dave’s ordinary adventures. As Dave – and we with him – become more and more disoriented by the increasingly surreal nature of his experiences, a shadowy figure observes Dave’s every move, while cribbing up on an ancient, staticky VHS instructional series (from 1987!) on mind control and dream manipulation. Will poor lost Dave ever be able to return to his “still flawed state”?

Normally, ‘nothing really happens’ is a dismissive phrase used to characterise the kind of film narrative whose events turn out to be confined to a character’s dreams or imagination, yet in this no-budget labour of love – written, directed, shot and edited by newcomer Justin Petty over four years – the banal, quotidian details of one man’s life are both wryly observed and subjected to a hilariously wrong type of external manipulation, with the manipulator slowly coming into focus as the one with the real problems.

It is a mesmerising Houston-set spin on Eternal Sunshine of the Spotless Mind (2004), where failures of communication are amplified by the unwanted application of misguided pseudo-science, DIY therapy and sexually repressed stalking. The everyday is rarely presented in such an imaginatively unhinged manner.