From Imogen Poots and Jesse Eisenberg as petri-dish suburban parents to Nicolas Cage in the latest mindbender from Richard Stanley, these seven films will reprogramme your view of the world.

The rituals of religious cults provide both a distorted imitation of life and metaphor for the same. In these practices we find escapist ecstasies, reconstructions of family and self, communion with the divine and even the ritualised enactment of death. Cult cinema has a similar function, luring its willing initiates into a transformational journey that takes them out of themselves, while reprogramming their view of the world. So it follows that the Cult strand in this year’s BFI London Film Festival features many titles that offer a guided excursion through and from our everyday reality.

“Let’s stay like this all day long,” says little Maja (Katarina Jacobson), wishing that her happy pre-birthday excursion to Denmark with mum Elin (Ylva Gallon) and dad Tobias (Leif Edlund Johansson) could last forever. Tragedy quickly follows, and three years later Elin and Tobias are back on the road again, their relationship in freefall.

Writer-director Johannes Nyholm (The Giant, 2016) takes all the grief, loss and bitter recriminations of this Swedish couple and drops them into the realm of myth, dream and folklore. Their unresolved feelings, staged variously as an apparently inescapable loop of vicious murder at the hands of three grotesque performers, and as a melancholic lo-fi puppet show, eventually reach a crisis point in a roadside rut, with the film’s absurdist excursions never losing sight of the characters’ underlying, overwhelming trauma.

Its hero, handyman Mehmet (Ihsan Önal), is an insomniac with a tendency to doze off at any moment, which might explain the nightmarish perspective through which the goings-on at his apartment building are filtered. But writer-director Ocrun Behram’s feature debut is also a dystopian parable, exposing the hidden pipes and wires that feed the propaganda machine of an oppressive regime. The new antenna installed on the building’s roof to bring round-the-clock state broadcasts into the home also leaks a toxic black ooze into the very infrastructure of the residents’ lives, transforming those it does not kill into violent faceless cyphers.

Like Johnny Kevorkian’s Await Further Instructions (2018), this is a parable of mediated power and control, where resistance to the system is futile. Made in Turkey, its specific target – growing authoritarianism in the presidency of Recep Tayyip Erdogan – is obvious, but its allegory might be extended to any system to which we are asked, or even forced, to sacrifice basic freedoms and individual identities.

Opening with shots of a young cuckoo evicting an egg and chick from its host birds’ nest, director Lorcan Finnegan and writer Garret Shanley’s follow-up to Without Name (2016) will continue to be preoccupied with brood parasitism, but shift its steady twitcher’s eye to a young human couple looking to make a nest and family of their own.

Primary school teacher Gemma (Imogen Poots) and gardener Tom (Jesse Eisenberg) go to inspect a property in the new community of Yonder, only to find themselves lost in a labyrinth of permanently suburban uniformity, and tasked, as the condition of their release from this sunny hell, with raising a baby that is delivered to them.

The settling into domestic drudgery, Tom’s escape into work (digging himself ever deeper into his peculiar hole), Gemma’s feelings of abandonment and frustrated child-rearing, and both reluctant parents’ loss of hope and increasing sense of alienation from the next generation – these are recognisable aspects of family life, all lent an absurdist edge by some very surreal incursions of the less familiar. Here, we observe a hermetic world, less community than petri dish, in which the mere form of everyday living is captured, cultured and cloned in an unnerving parody of reality. 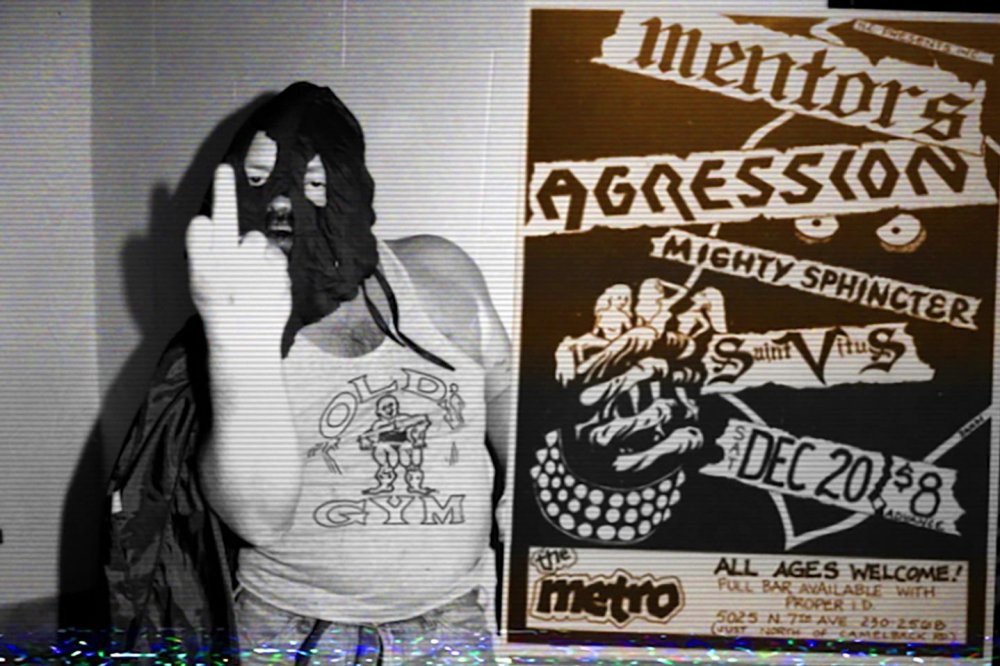 Directors Rodney Ascher (The Nightmare, 2015; Room 237, 2012) and David Lawrence’s film opens with the prefatory title card from D.W. Griffith’s white supremacist work Birth of a Nation (1915), calling for the artistic right “to show the dark side of wrong” – then cuts to concert footage from 1991 of El Duce (real name Eldon Hoke) on stage in executioner’s mask, petitioning his audience: “Everybody who likes to rape women, say ‘Sieg Heil!’” His band the Mentors were part of a disparate movement (‘shock rock’) which traded in juvenile offensiveness.

Drawing from a treasure trove of ‘found footage’ shot by actor Ryan Sexton in the early 1990s, this documentary is a contradictory portrait of El Duce as troubled child, skilled musician, poseur, provocateur, ‘nice guy’, artist and alcoholic, whose constant posturing showmanship and frequent intoxication render his own testimonies highly unreliable. The question is where this slippery, “American all the way” figure (who died in 1997) fits into the culture, and what impact he has left behind. A scene where he drunkenly claims that if he were leader he would call for the building of a Mexican wall suggests one answer about his place, whether trollingly parodic or merely prescient, in a history that leads right to the present day.

In Babak Anvari’s follow-up to Under the Shadow (2016), thirtysomething Will (Armie Hammer) finds a student’s mobile phone left behind in the bug-infested New Orleans bar where he works, and the disturbing texts, images, clips and calls that he receives on it will set him on a downward spiral to his own heart of darkness.

Will’s younger, more successful postgraduate girlfriend (Dakota Johnson) is called Carrie Lynch – both names allude to the film’s inspirations and intentions, as does her doctoral thesis topic, T.S. Eliot’s The Hollow Men. For Will’s crisis may be expressed through occult trappings and Gnostic rituals, with some hallucinatory digressions into genre territories, but all this serves to expose as much as conceal the real Will – underachieving dropout, disaffected womaniser, dipsomaniac in denial – as he is brought into painful confrontation with his own inner emptiness, parasitism and rot. So this is a horror film, but also a psychodrama deploying horror tropes to portray mental, emotional and existential fugue, and finally traumatic self-recognition.

This is a chilling tragedy of families, broken and badly reconstituted. Young Aidan (Jaeden Martell) and his even younger sister Mia (Lia McHugh) resist their father Richard (Richard Armitage) in his desire to remarry and form a new family with Grace (Riley Keough) – while Grace is haunted by her own family history as the sole survivor of a doomsday cult led by her father.

When the two children find themselves stuck with Grace in a snowbound lodge over Christmas, these different family models overlap and clash, even as the conflicting archetypes of religion, folk tales (the wicked stepmother) and horror (Grace’s dog is named after a character from The Shining, and the three at one point watch The Thing together) transform the lodge’s elegant interior reality into a doll’s house of several rival imaginations.

Renowned for the twistiness of their Goodnight Mommy (2014), Austrian co-writer-directors Severin Fiala and Veronika Franz certainly keep delivering surprises – but their icy mixer of suicide and survival, tricks and treachery captures, in its shifting paradigms, the disorientation of overwhelming dysfunction and resurfacing trauma.

Color Out of Space

While Theresa Gardner (Joely Richardson) works online upstairs, her husband Nathan (Nicolas Cage) explains to their three sceptical children that the dish he has just cooked for them is a cassoulet, combining a variety of meats and vegetables into one amorphous stew.

Living out on a remote woodland farm in West Arkham, the Gardners form a loving, cohesive unit, although each member has their own quirk. Having just survived breast surgery, Theresa frets about her damaged body and self-image. Back on the property where he grew up with his domineering father, Nathan has inveterate daddy issues. The eldest son Benny (Brendan Meyer) smokes pot and is easily distracted, his younger sister Lavinia (Madeleine Arthur) is into wicca, and youngest son Jack (Julian Hilliard) clings to his mother.

Later that evening, the crashing arrival of a glowing meteorite will mix up all these elements into an irrational cassoulet of its own. With reality warping and stretching, the Gardners find themselves being reconstituted into a colourful cosmic soup as its members, in accordance with the wishes of Cage’s increasingly manic patriarch, “all just pull together”.

This represents not just the mysterious merging of the earthly and the alien, but also the alignment of at least three different cultic centres: the visionary writings of SF author H.P. Lovecraft; the cinema of director Richard Stanley, whose notoriously abandoned project The Island of Dr Moreau (1996) has conferred upon him as much cult status as his earlier, finished features Hardware (1990) and Dust Devil (1992); and another unhinged performance from actor Nicolas Cage, who is a cult unto himself.

What emerges from all this is a hybrid of extraterrestrial invasion, body horror, ecological anxieties and freakout comedy. If the film’s use of shimmering aurora-like effects, natural efflorescences and grotesque mutations recalls Alex Garland’s Annihilation (2018), it is only because Garland’s film too was influenced by Lovecraft’s 1929 short story The Colour Out of Space. What Stanley’s version adds to this heady brew are the wildcards of milking alpacas, off-the-grid eccentricity and Cage ever so gradually bringing the crazy, all played to expose the cracks in an all-American family structure.