DeKalb Elementary and Green Screen Gringo: two of the best from Clermont-Ferrand 2017

Two of the major winners at this year’s Clermont-Ferrand International Short Film Festival showed that even the smallest films can engage with global concerns – from gun violence in schools to political unrest in Brazil.

As the biggest short film festival in the world (last year its audiences stood at 163,000), France’s Clermont-Ferrand provides an intriguing snapshot of the current state of short film across the globe. Two of the winners of this year’s edition display not only a mastery of the short film form but also a desire to engage with the hopes and fears of the modern age.

A selection of 18 highlights of the festival, including DeKalb Elementary and Green Screen Gringo, is available to watch now on Festival Scope.

Reed Van Dyk’s DeKalb Elementary, the winner of the Grand Prix in the festival’s International Competition, is based on a real-life emergency call made during a school shooting incident in Atlanta, Georgia. Occurring in real time, it begins with an ordinary day in a US elementary school. Enter, with a semi-automatic rifle, twentysomething Steven (Bo Mitchell), who proceeds to evacuate the building apart from school secretary Cassandra (Tarra Riggs). When he asks her to ring 911, a showdown with the police is inevitable. 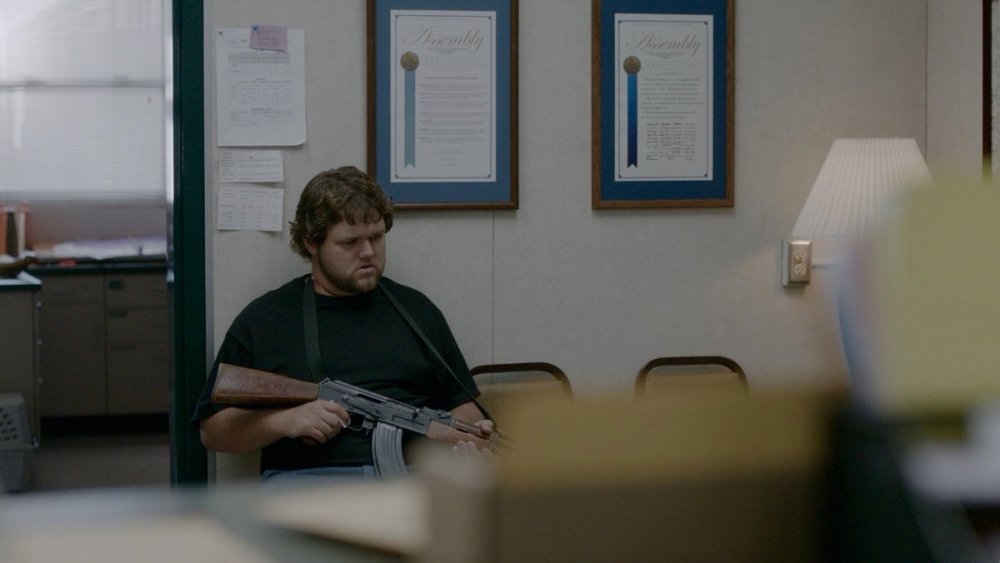 Initially the film trades in the tropes associated with other films dealing with school shootings – an ever-present air of violence and fear arising from a situation in which there is no control. But as the film begins to focus on the relationship between Cassandra and Steven, it becomes a moving treatise on the importance of human interaction.

Steven is every inch the stereotypical Southern boy when he first hulks into frame, fumbling with a rifle and being unfailingly polite even when issuing veiled threats. His exact motives remain unclear – though he alludes to mental health problems – and even his communication with the police has to be channelled through Cassandra. For all the power he has in the situation, he is still awkward and scared. Throughout the film, his framing enhances his dislocation from the rest of the world, as he’s obscured by doors and windows. It’s only through Cassandra refusing to judge or condemn his actions that some hope of connection becomes possible. 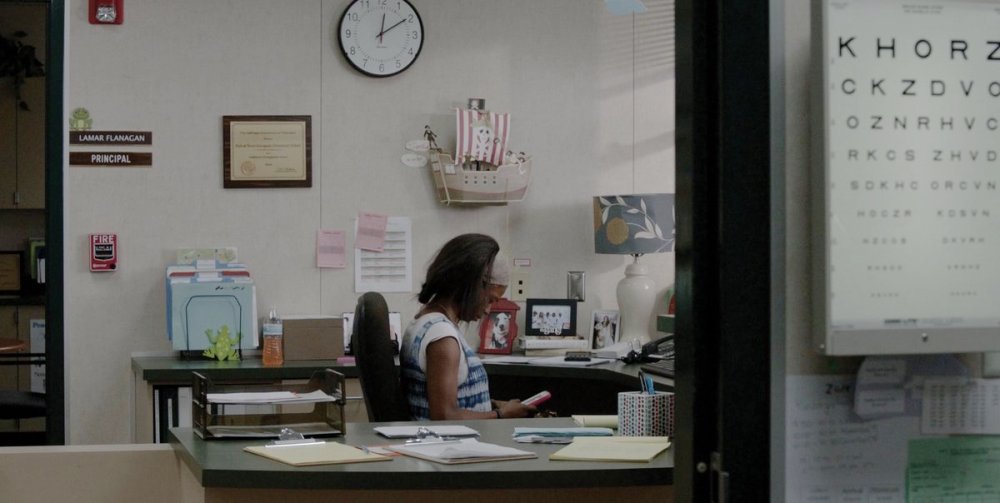 Writer and director Van Dyk keeps everything understated with a quasi-documentary feel and allows the strong chemistry between Mitchell and Riggs to carry proceedings. Yet despite its subtlety, the film has a strong emotional charge and the final moments are particularly affecting. A product of the UCLA Film School, Dekalb Elementary uses the short form to its best advantage as it favours the understated and the intimate over the melodramatic and grandiose. Over its lean running time it shows how a brief display of humanity can have seismic effects on a wider group.

In the festival’s Labo competition – reserved for more experimental works – the Grand Prix went to Douwe Dijkstra’s Green Screen Gringo. Netherlands-based filmmaker Dijkstra has previously garnered a glowing reputation on the short-film festival circuit with documentary films such as Démontable (2014) and Supporting Film (Voor Film, 2015). These works have been typified by a sense of playfulness and fun. Initially, Green Screen Gringo would appear to carry the whimsical air of his previous work – but there’s sharp political analysis and satire on offer here as well.

In the streets of Brazil, a foreign director walks around holding a green screen. Residents tell stories, read poems and reveal the political turmoil at the heart of the country while the green screen superimposes scenes that do not necessarily gel with what is shown in the rest of the frame.

This begins as a self-referential exercise in filmmaking that delights in making everything slightly off-kilter. A Brazilian resident animatedly phones his wife to tell her about the foreign filmmaker wanting to film him as the green screen is held behind him. But the whimsy gives way to more serious matters.

In a static shot of a wall graffitied with the words “Dilma Out” (in reference to the soon-to-be-ousted Brazilian president Dilma Rousseff), the director walks from from left to right carrying the green screen, on which is projected images of protests. Later an impactful speech about the disillusionment felt with Brazilian politics has footage of people taking selfies at a tourist spot superimposed in the background.

The incongruities reflect a world in which cultural and political understanding is mediated through sources that are not always trustworthy. The director – the titular green screen gringo – blunders into the situation, only able to examine fragments of what is going on around him or resorting to clichéd ideas about Brazilian culture. His subsequent projections reveal either a misunderstanding of what is being said or a wilful subversion of it. It’s only as the film begins to reach its conclusion – in particular during one impassioned poem about modern Brazil – that intention and image begin to match up.

The juxtapositions in the film also work as an examination of the way in which the everyday collides with the extraordinary. Radio reports of Rousseff’s controversial impeachment are accompanied by images of everyday life in Brazil. Girlfriends kiss, a man dons a tribal outfit and drag queens put on their make-up. This array of imagery speaks of a society that is ever colourful and diverse but – like much of humanity – difficult to fully explain and understand in a few images.

A constantly humorous, human and sharply satirical film, Green Screen Gringo marks an evolution in the work of Dijkstra and – as it begins its festival run – will undoubtedly be on many screens throughout 2017. And though they’re wildly different works, both it and DeKalb Elementary show just how powerful short film can be.