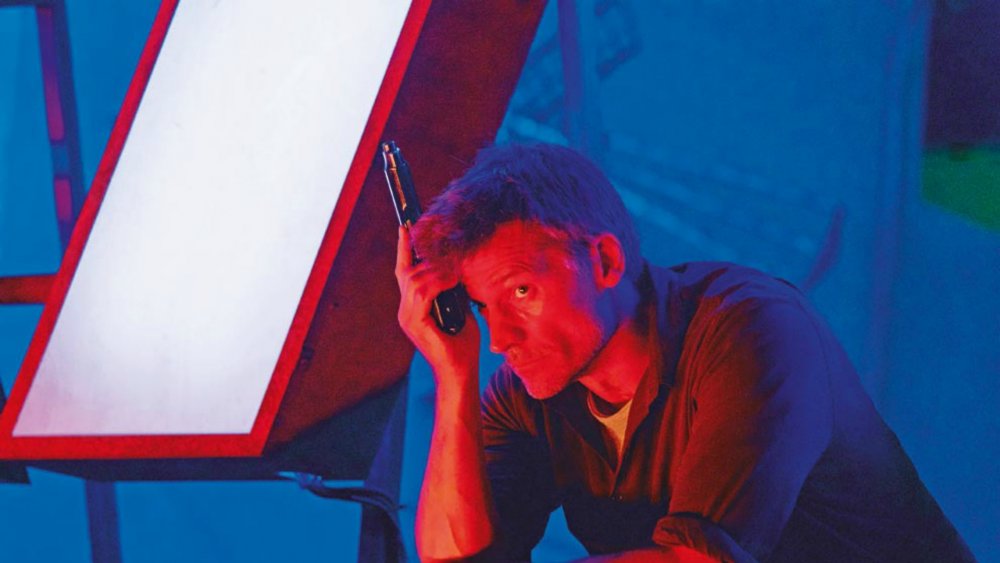 When is a film not a film?

If this sounds like the start of a joke, it is appropriate that the punchline should be: when it’s Brian De Palma’s Domino. For what we are dealing with here is a director who has spent much of his career hoodwinking both audiences and characters.

Domino is available on DVD and Blu-ray and to stream or download from digital stores.

The deceptiveness of De Palma’s films is usually suggested by a sardonic tone, one insinuating that, just as the protagonists cannot be certain of what they saw, so the viewer cannot be sure this thriller or horror movie isn’t deconstructing the very narrative/visual forms in which it is theoretically embedded.

Even by De Palma’s standards, Domino is an oddity, its status as a product – an object which has passed through all those stages befitting a work intended for commercial distribution – being extremely problematic. Shot in various European locations during 2017, Domino completed post-production in 2018 (the year it is copyrighted), enjoyed its first public screenings in 2019, and begins with a caption reading “June 10, 2020”, implying a slightly futuristic setting while making an auteurist connection with De Palma’s Mission to Mars (2000), whose first scene takes place on “June 9, 2020”.

Domino, which like the director’s previous feature Passion (the subject of an earlier Bradlands column) has gone straight to DVD in the UK, arrives accompanied by tales of behind-the-scenes difficulties.

Interviewed at the Fnac des Ternes bookstore in Paris last June, De Palma explained that “It was a very difficult situation, a film that was underfinanced. I was in many hotel rooms waiting for the money so that we could continue shooting. I was in many fabulous cities, waiting in hotel rooms. I was here 100 days in Europe, and shot 30. However, somehow we managed to make a movie out of this completely chaotic production situation, and hopefully you’ll be seeing it in your local cinemas sometime in the future.”

Despite currently being reluctant to discuss Domino, De Palma has denied rumours that the final cut, clocking in at 89 minutes, was shortened against his wishes (an erroneous original running time of 148 minutes has been cited by reviewers), informing the De Palma a la Mod website that “It was not recut. I was not involved in the ADR, the musical recording sessions, the final mix or the colour timing of the final print.”

These remarks would be little more than gossip did they not speak so directly to the experience of viewing the end result. For this is plainly an unfinished film, patched together from whatever materials happened to be available when the money finally ran out.

De Palma is playing his usual Oedipal games in Domino, whose protagonist, Christian Toft (Nikolaj Coster-Waldau), is a Danish police officer who uncovers a terrorist cell after being inadvertently responsible for the death of his older partner, Lars Hansen (Søren Malling). Lars is explicitly positioned as a father-figure to Christian (who refers to him as “my sort-of father”), and it is Christian’s clumsiness that causes his father/partner’s death: he ‘forgets’ his own gun, and has to borrow Lars’s, then, after Lars has his throat slit, manages to lose this gun as well, ‘accidentally’ dropping it as he pursues Lars’s assailant. Christian’s inability to retain the symbolic phallus (he is, in a sense, doubly castrated) is thus almost comically overdetermined, the pursuit (a homage to Hitchcock’s Vertigo) having a suitably dreamlike tone. 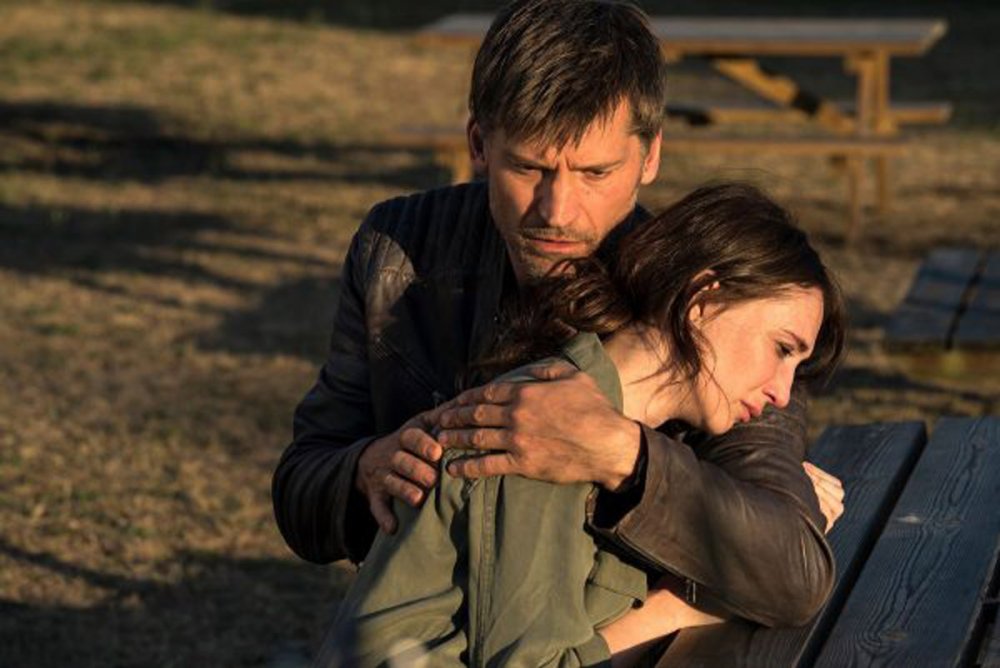 Needless to say, after ‘accidentally’ killing the father, Christian must complete his Oedipal trajectory by sleeping with the mother. And since Lars’s wife Hanne (Paprika Steen) is not a viable object for Christian’s desires (she is too obviously ‘the mother’), the film is obliged to provide an alternative in the form of Lars’s young lover Alexandra Boe (Carice van Houten), who, it turns out, is pregnant by Lars. The emergence of an amorous/sexual relationship between Christian and Alexandra is guaranteed not only by the Oedipus Complex, but also by the demands of the narrative, romance being unavoidable in a movie which has two attractive male/female leads investigating a crime together. Yet this romance never actually happens, presumably because De Palma was prevented from shooting scenes relating to it.

There are echoes here of De Palma’s Mission: Impossible (1996), in which Ethan Hunt (Tom Cruise) must kill his own “sort-of father” Jim Phelps (Jon Voight) after having sex with the symbolic father’s much younger wife, Claire (Emmanuelle Béart). And while there is no ambiguity about Ethan’s having slept with Claire (indeed, this proves to be part of Jim’s scheme), the film remains surprisingly coy on this matter, fading to black after Claire kisses Ethan’s hand. That this act of displaced incest has been ‘repressed’ is all the more striking in that De Palma shot footage showing Ethan and Claire making love, some of which turned up in the trailer (see frame grab below). 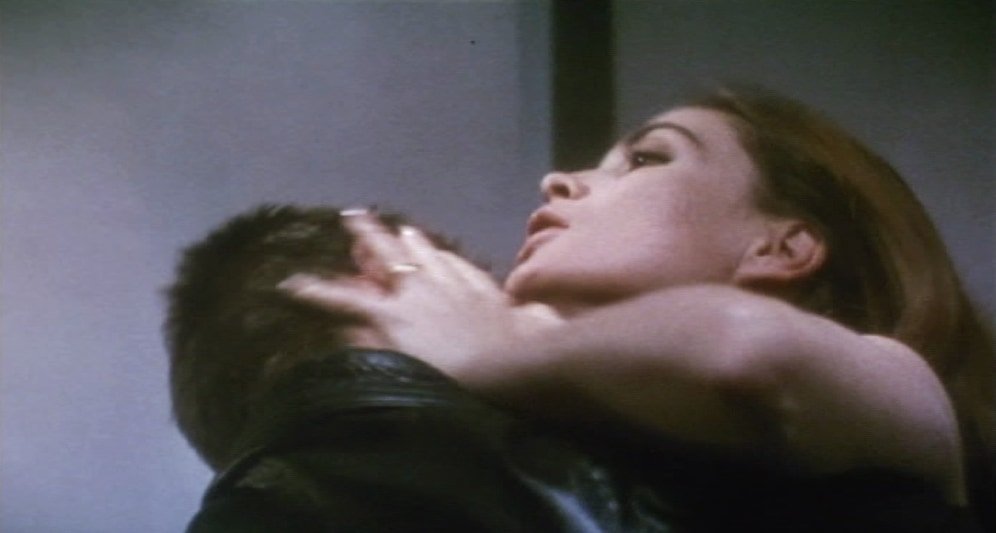 Footage of Tom Cruise’s Ethan Hunt and Emmanuelle Béart’s Claire making love which appeared in the trailer for Mission: Impossible, but not the film itself

Of course, repression is hardly a concept incompatible with Freudian theory, and if evidence of the Oedipal crime is obscured in Mission: Impossible, it is entirely absent from Domino due to an ‘accident’ of production. And as all good Freudians know, there is no such thing as an accident.

Domino proves to be doubly illusory, uniting its protagonist, who keeps ‘accidentally’ losing his phallus/gun, with its director, who ‘accidentally’ loses crucial parts of his film. And this illusion is passed on to the viewer, who had every reason to believe she was watching a completed work.

Domino (a title which, appropriately enough, is meaningless) thus has less in common with De Palma’s earlier output than it does with that version of Erich von Stroheim’s abandoned Queen Kelly (1931) assembled in 1985, juxtaposing fragments of Stroheim’s footage (including stills from lost sequences) with intertitles covering vast acres of scripted material that never went before the camera. Reviewing this for the Monthly Film Bulletin (September 1985), Richard Combs noted a shot of an ocean liner which “lasts several seconds – an eternity, it seems, given the information it conveys, compared to the flurry of titles and stills which have just tucked away so many dramatic developments and reversals in a twinkling”. For Combs, these a-rhythms, “the narrative disappearing after doing busy little mountains of work”, recalled the cinematic practises of Straub-Huillet.

Something of this quality is discernible in Domino’s finale. Despite containing several typical De Palma set pieces in which events that might have occupied a few seconds in ‘reality’ are stretched to breaking point, the film concludes with a brief rooftop scene wherein multiple plot developments are breathtakingly piled on top of each other with no concern for logic, plausibility or consistency. This scene obviously had to be shot hurriedly and at little expense in order to provide some kind of climax, the effect being both absurd and oddly disturbing, as if the film’s primary motivation were to finish unreeling before it could embarrass itself any further.

Which is to say that it does ‘accidentally’, and by contraction, what De Palma’s set pieces (themselves often simultaneously absurd and disturbing) do ‘deliberately’, by expansion. Even random details which, in the absence of those presumably unrealised sequences that might have explained them, make no sense have their antecedents in De Palma’s previous mischievously misleading films, whose main principle of construction would appear to be the aporia. When CIA agent Joe Martin (Guy Pearce) arrives on the rooftop, why does Christian suddenly know his name? One might as well ask why Mission: Impossible demands that the Bible Jim Phelps has stolen reveals him to be the pseudonymous mole ‘Job’ when it clearly does no such thing.

Although the director’s admirers have found little to praise in Domino, this film maudit might appeal to those who usually reject De Palma’s oeuvre as excessively controlled, too micro-managed for anything unplanned to seep in. It even evokes memories of Jacques Rivette’s Out 1 (1971), in which stories and identities are subjected to a process of infinite improvisational expansion that can only end with a return to point zero.

Like so much of De Palma, Domino makes us question the nature of cinematic illusionism, forcing us to ask what purpose images serve beyond the conveying of narrative data which is their ostensible reason for being. That it does this inadvertently is precisely the reason for its fascination.

Related to Brian De Palma’s Domino is a puzzle