The actor refuses to hang it up in the sixth Mission Impossible film – a movie thin in plot but packed with astonishing visuals and thrilling action sequences. 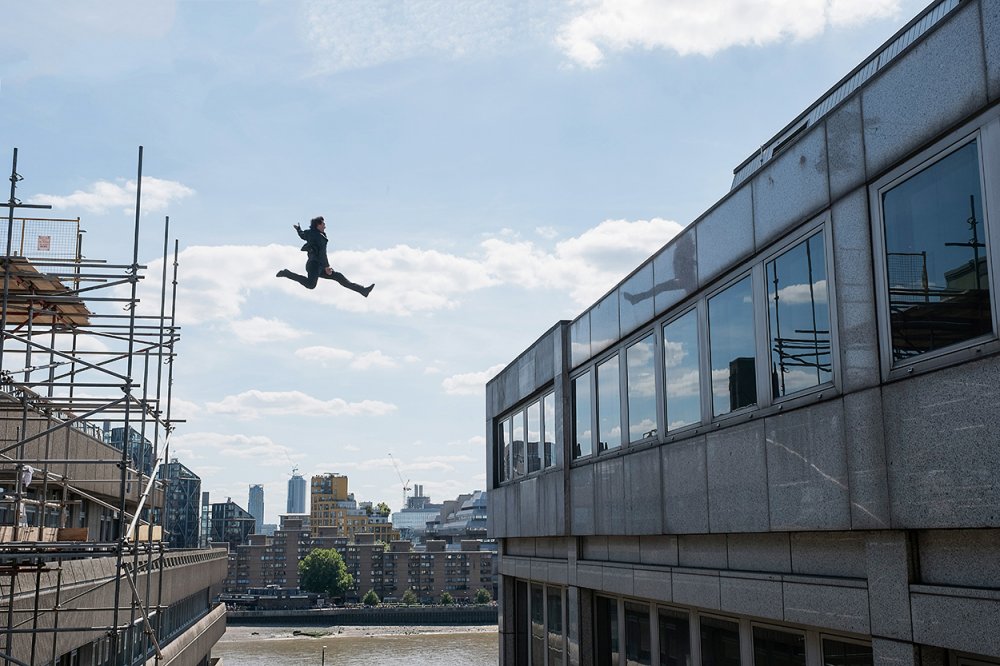 A hundred years ago, Louis Aragon invented a new way of seeing films, specifically those “dear old American adventures” that discovered in everyday images of modernity – “the vertiginous, 1,000-eyed facade of the thirty-storey house” – something marvellous, “a novel poetry for minds able to respond to it”.

Two-thirds of the way through the sixth Mission: Impossible, Ethan Hunt (Tom Cruise), seen from directly above, runs up the inside of the dome of St Paul’s, runs across its roof, jumps across a series of alleys, runs through offices, jumps on to the roof of Blackfriars Bridge, runs across it – tracked from the side, framed against the city skyline – then to Tate Modern, where he follows his prey, August Walker (Henry Cavill), in a lift to the very top of the chimney – only to see Walker and his confederates fly away in a helicopter. Hunt is shown standing amid the thickets of skyscrapers, almost all of them erected in the years since his first visit to London in 1996, in a dizzying aerial shot.

Why is Walker being picked up from the top of Tate Modern, exactly? Because it looks extraordinary. Why, earlier on, do Hunt and Walker, a CIA agent who has been imposed on Hunt’s IMF team, need to parachute into Paris – through a lightning storm moreover – rather than, say, use rubber masks as usual? 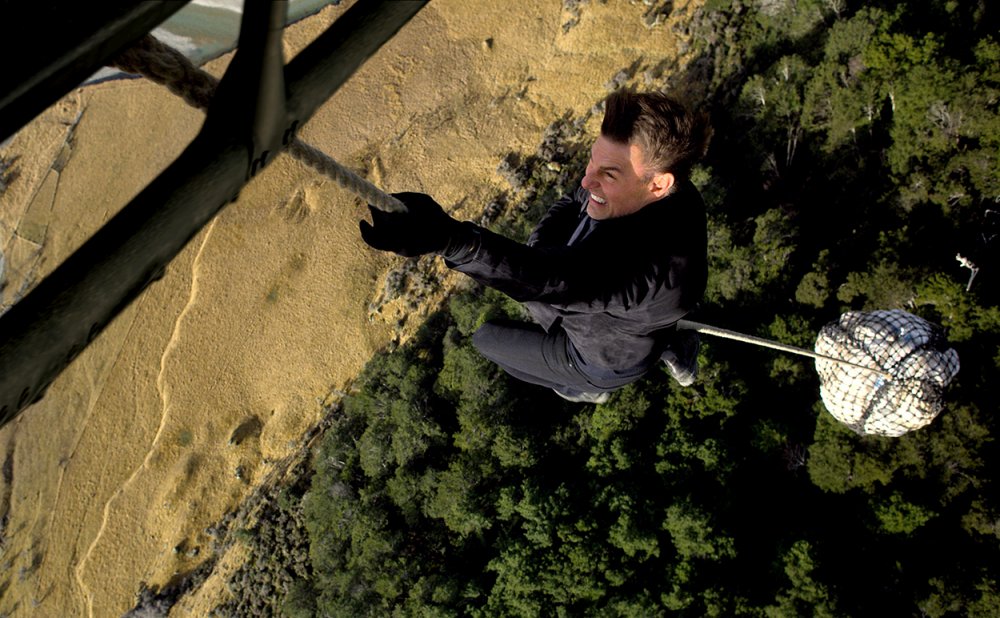 Well, there is a narrative explanation, but it fools no one: the real reason is that it makes possible some of the most astonishing images of the year – the camera makes the leap first, looking up at the plane as Hunt comes to the edge of the ramp. Another of the most thrilling sequences is a motorcycle chase through the centre of Paris. There is always chatter about the realness of the stunts in a Mission: Impossible movie, but what matters is the IMAX sensation of almost being hit by cars, however it’s achieved.

It can’t be a coincidence that this chase passes through the avenue de l’Opéra, one of the roads built by Baron Haussmann in the late 19th century, sweeping away the old arcades evoked by Aragon in Le Passage de l’Opéra, published in 1924. “Future mysteries,” he wrote then, “will arise from the ruins of today’s.”

Part of the Mission: Impossible franchise’s charm is that it has never bothered much with continuity. Fallout makes more of an effort than most entries. It has the bad guy from the last instalment, Rogue Nation (2015), and Rebecca Ferguson, that film’s star turn, is back as rogue MI6 agent Ilsa Faust. Reaching further back, it has Vanessa Kirby in a pleasing performance as the daughter of Vanessa Redgrave’s character in the first film. It also has Michelle Monaghan as Hunt’s consciously uncoupled wife – heroine of the third film, but left out of all but one scene since then because Hunt, according to the fourth film, Ghost Protocol (2011), has to be a man without attachments. 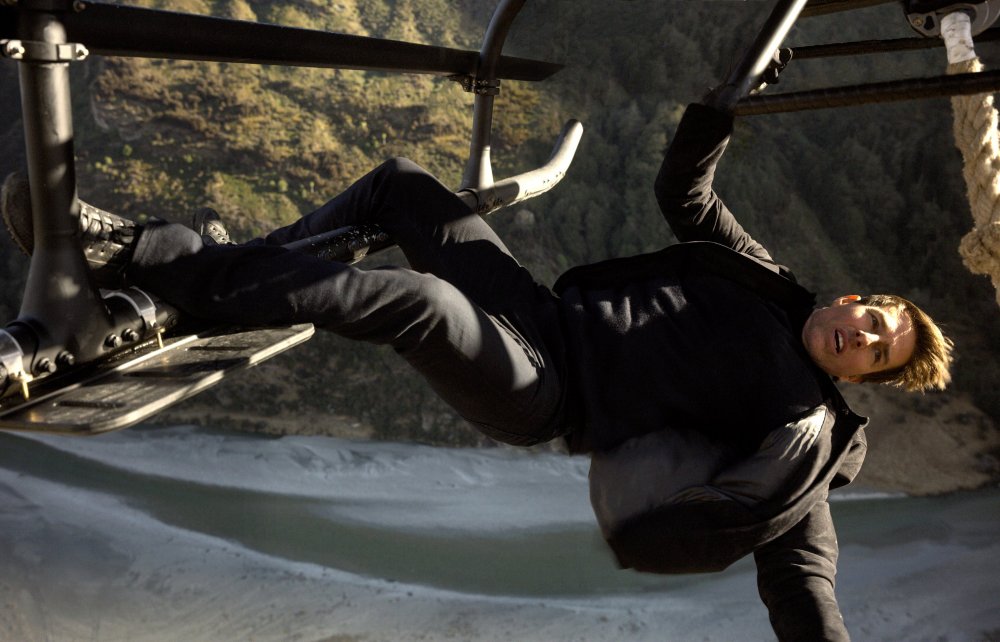 Except that the mutual attraction between Hunt and Ilsa – Hunt’s deadly equal and sometimes rival – was the mainspring of Rogue Nation. This one ends with the two not dissimilar-looking women in Hunt’s life standing by his field-hospital bed, one whispering a secret we can’t hear into the other’s ear, apparently bonding over their shared affection for a man who – for the good of mankind – cannot return it, much as we assume he would like to.

Age is the obvious subtext – Tom Cruise is 56, only a few years younger than Alec Baldwin and Angela Bassett, playing his two bosses, both unthinkable as field agents. His gravity-defying refusal to hang it up is another part of the appeal of the series: it was as long ago as 2006, at the start of M:I III, that Hunt was relegated to training duties, but the slate was wiped clean after that.

Like other possible replacements before him, Jeremy Renner does not return as Brandt. For all that continuity is generally ignored, however, there is plenty of repetition. The bad guys in this one have exactly the same motivation as the bad guys in Ghost Protocol – nuclear war as purgative, making way for something better – and this is at least the third time that Hunt has been framed as a mole. One tends to go along with the idea that the plot is only there to deliver the next set piece, but writer-director Christopher McQuarrie was once responsible for The Usual Suspects, one of the best-constructed screenplays of the 1990s, and proof that plots can be marvellous too.