Celebrating Tilda Swinton: the chameleon star opens up on performing, collaborators and the joys of cinema in the S&S Interview – and writes us a poem!

Plus the return of cult director Richard Stanley, Oscar-winning cinematographer Roger Deakins in ten shots, Levin Akin’s gay Georgian love story And Then We Danced, Cary Fukanaga on Brexit-era Bond and Václav Marhoul on his searing child’s-eye view of WWII in The Painted Bird.

In print and digital from 2 March 2020. Buy a print issue, get the digital edition or . 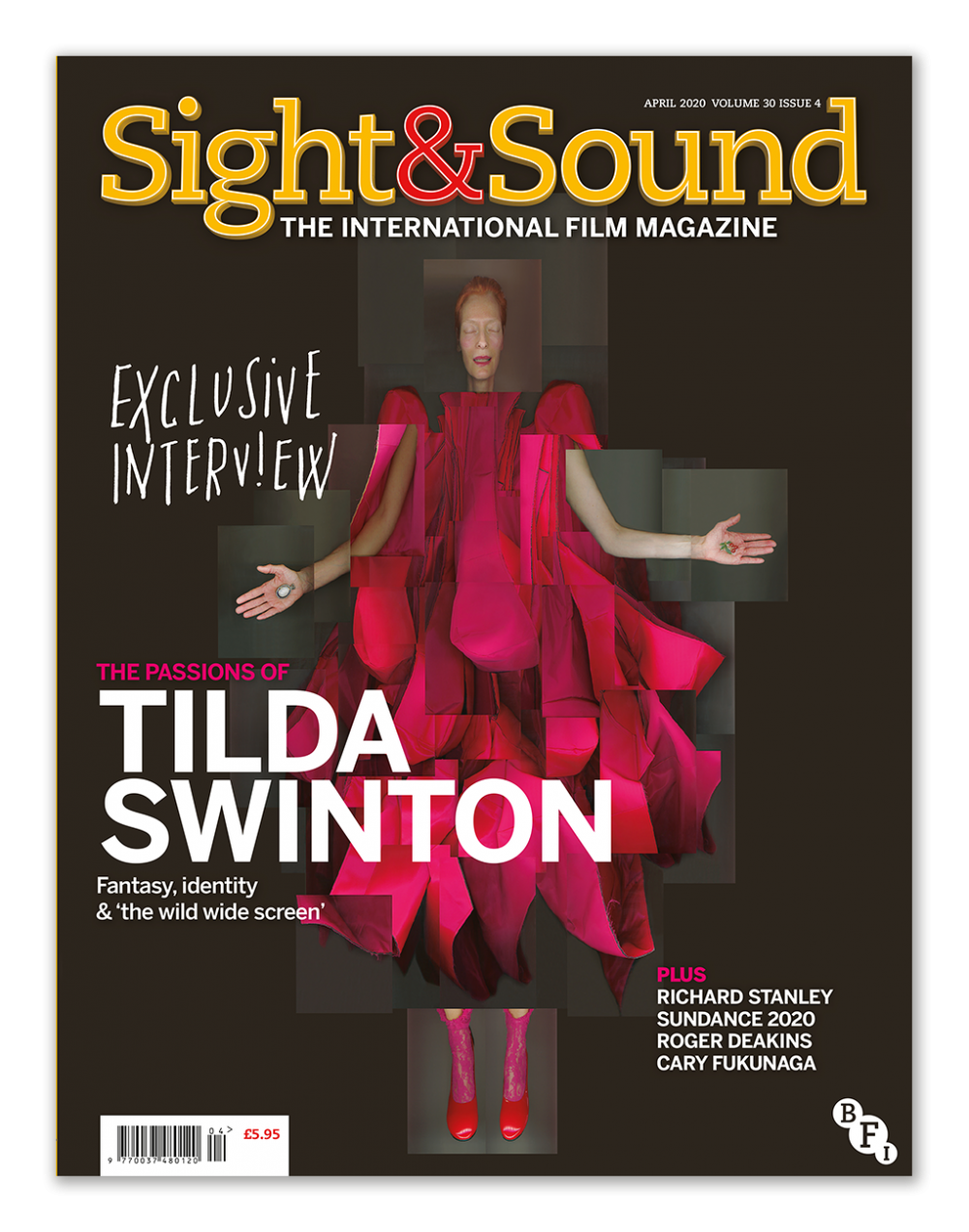 In an exclusive interview for our April 2020 issue, we sit down with cinema’s chief chameleon, Tilda Swinton. The queen of transformation even reinvents herself for our cover, in a special shoot with photographer Katerina Jebb. Swinton’s remarkable screen presence has been the engine behind a dizzying variety of films, from early collaborations with Derek Jarman and Sally Potter to forthcoming work by Pedro Almodóvar and Wes Anderson. She talks to Isabel Stevens about Buster Keaton, sharing Tarkovsky’s dreams and why the greatest performance in cinema history is by a donkey.

“I love the fakery and the smoke and mirrors and the make-believe of cinema. It never feels very far from a children’s dressing-up box either with Bong Joon Ho or in Dungeness with Derek. It all pretty much, in my experience, tends to feel like a playground.”

The View from Here is a poem and an ode to cinema and the “wild wide screen” that Swinton has written especially for our April 2020 issue. In it she writes about her fervent belief in cinema’s longevity, the ability of film to transcend national boundaries but also how she hopes the “mighty streaming services” will be “galvanised to restore, support or build great big screens”.

Beyond our cover feature, there is a smorgasbord of riches that testify to Swinton’s vision: we talk to Czech director Václav Marhoul about The Painted Bird, his searing portrait of a boy trapped in the violence of Eastern Europe during World War II.

We also explore Levan Akin’s tender love story And Then We Danced, an intoxicating celebration of Georgian culture and a defiant challenge to homophobia in the country.

Cult director Richard Stanley resurfaces almost 25 years after his career hit the skids, and we couldn’t resist talking to him about Color out of Space, a sci-fi horror tale starring Nicolas Cage, based on a story by horror writer H.P. Lovecraft. Meanwhile Roger Luckhurst explores how Lovecraft’s tales of metaphysical dread have found increasing favour with a new generation of filmmaker And as Roger Deakins’s Oscar wins only confirm what people already knew: that the British cinematographer is one of the greatest artists of light and shade in movie history, we select ten shots that show off his genius.

Elsewhere, we report from Sundance, interview Cary Fukunaga about bringing 007 into the Brexit era, talk to Todd Haynes about Dark Waters and his love of whistleblower films and trek down to Dungeness to report on an appeal to save Derek Jarman’s Prospect Cottage. Meanwhile we review all the month’s new cinema releases, including Kleber Mendonça Filho and Juliano Dornelles’s Bacurau, Koreeda Hirokazu’s The Truth, suburban horror Vivarium and Dogs Don’t Wear Pants.

We also catch up with the latest Blu-ray releases – including a new box set of Abbott and Costello’s films for Universal Studios – spotlight the highlights from new TV and streaming, including hit Indian series about a wedding planning agency, Made in Heaven. 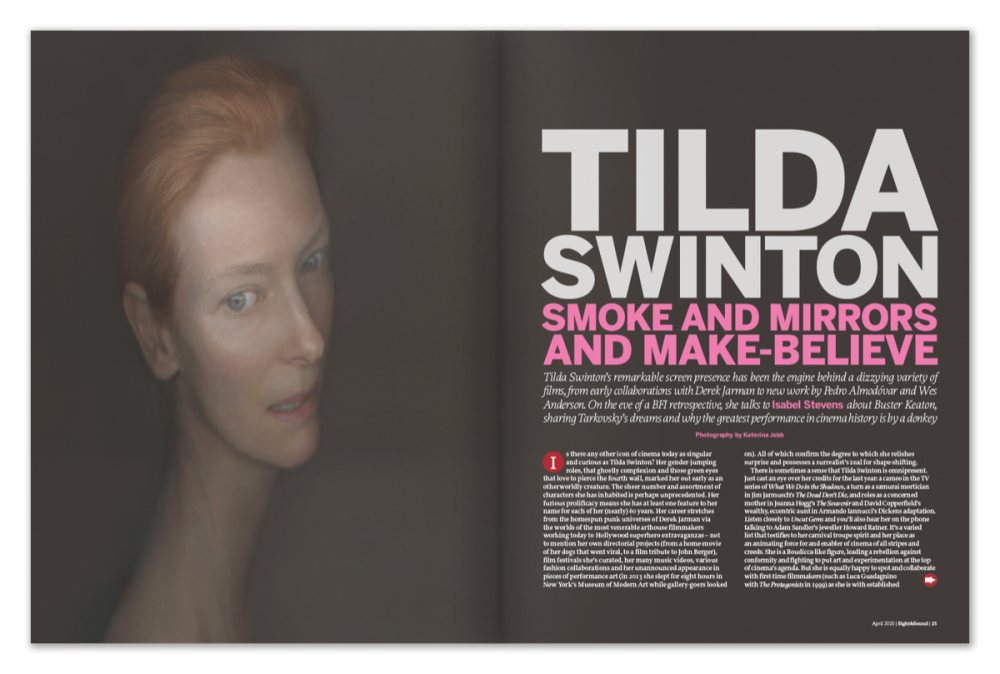 Tilda Swinton’s remarkable screen presence has been the engine behind a dizzying variety of films, from early collaborations with Derek Jarman to new work by Pedro Almodóvar and Wes Anderson. As a BFI retrospective begins, she talks to Isabel Stevens about Buster Keaton, sharing Tarkovsky’s dreams and why the greatest performance in cinema history is by a donkey.

+ The View from Here

A poem and ode to the “wild wide screen” which Swinton has written especially for this issue, in which she expresses her belief in cinema’s longevity, her faith in film’s transcendence of national boundaries and her hope that the “mighty streaming services” will be “galvanised to restore, support or build great big screens”. 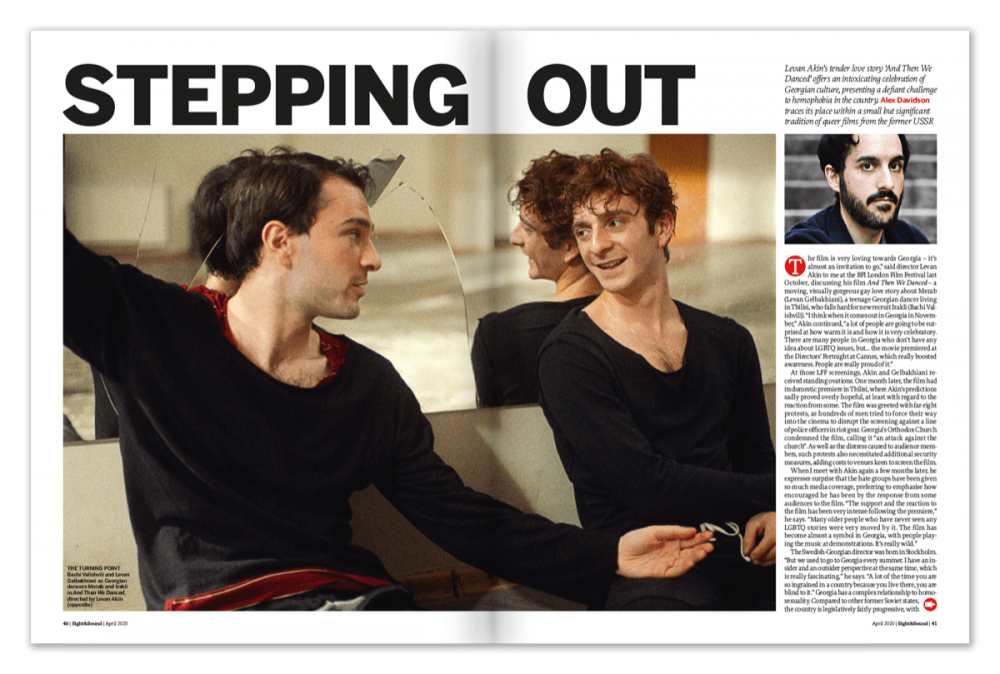 Václav Marhoul’s The Painted Bird, a searing portrait of a boy trapped in the violence of Eastern Europe during WWII, joins a brave lineage of films exploring the experience of conflict in the region, from Ivan’s Childhood to Come and See. By Michael Brooke. 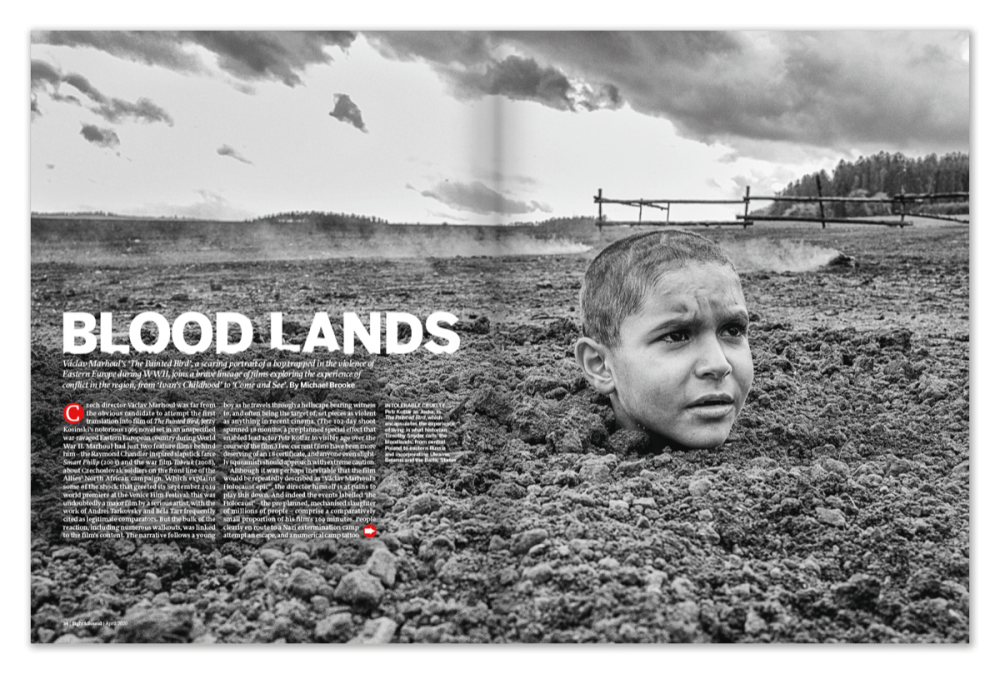 Levan Akin’s tender love story And Then We Danced offers an intoxicating celebration of Georgian culture, presenting a defiant challenge to homophobia in the country. Alex Davidson traces its place within a small but significant tradition of queer films from the former USSR. 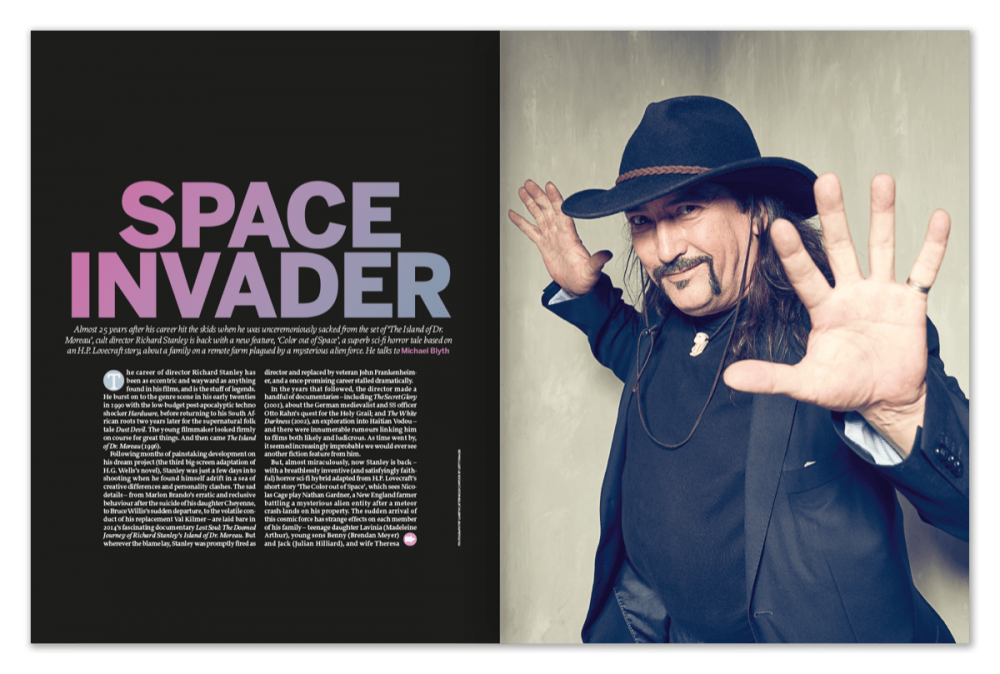 Almost 25 years after his career hit the skids when he was unceremoniously sacked from the set of The Island of Dr. Moreau, cult director Richard Stanley is back with a new feature, Color out of Space, a superb sci-fi horror tale based on an H.P. Lovecraft story, about a family on a remote farm plagued by a mysterious alien force. He talks to Michael Blyth.

Horror writer H.P. Lovecraft first emerged as a cinematic force in the 1960s, but his tales of metaphysical dread have found increasing favour with a new generation of filmmakers, writes Roger Luckhurst. 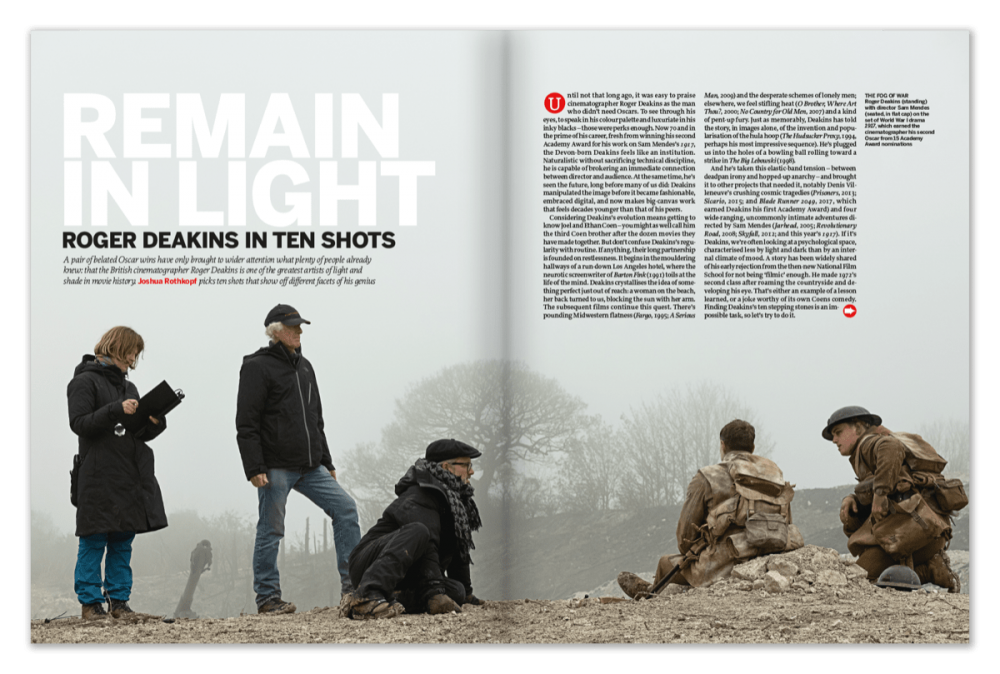 A pair of belated Oscar wins have only brought to wider attention what plenty of people already knew: that the British cinematographer Roger Deakins is one of the greatest artists of light and shade in movie history. Joshua Rothkopf picks ten shots that show off different facets of his genius. 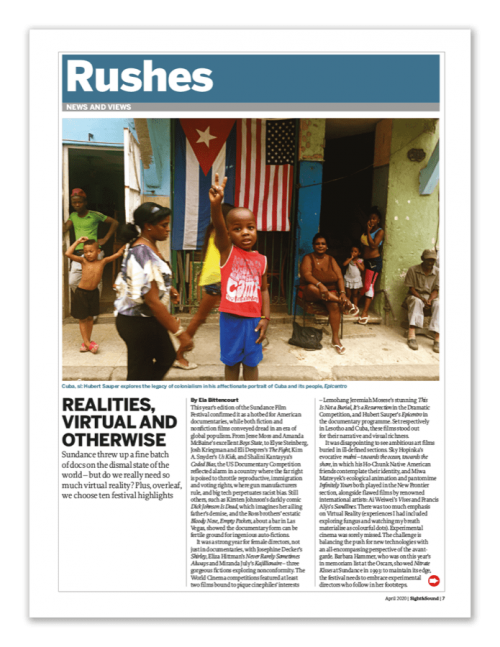 Sundance threw up a fine batch of docs on the dismal state of the world – but do we really need so much virtual reality? Plus ten festival highlights chosen by Anjana Janardhan, Joshua Rothkopf and Ela Bittencourt.

A joyful portrait of a 70s summer camp for disabled teens reveals a community ahead of its time that was a catalyst for disability rights. By Sophie Monks Kaufman.

No Time to Die director Cary Fukunaga talks about bringing 007 into the Brexit era and working with Phoebe Waller-Bridge. By James Bell.

Campaign: A room with a view

A new campaign hopes to preserve Derek Jarman’s Prospect Cottage in Kent as both a memorial and an inspiration to artists. By Ben Walters.

Thanks to a collaboration with the musician Gwenno, Mark Jenkin’s acclaimed fishing drama Bait has achieved a new depth. By Leonie Cooper.

The Iranian director Marjane Satrapi on the cinema where she discovered French cinephile culture and Pasolini, and developed a Borat habit.

Dark Waters is a lot more morally straightforward than the average Todd Haynes film – but no more reassuring. By Kieron Corless.

The numbers: Weathering with You

In a competitive month, Shinkai Makoto’s romantic fantasy has shown just how firmly anime’s popularity is established in the UK. By Charles Gant. 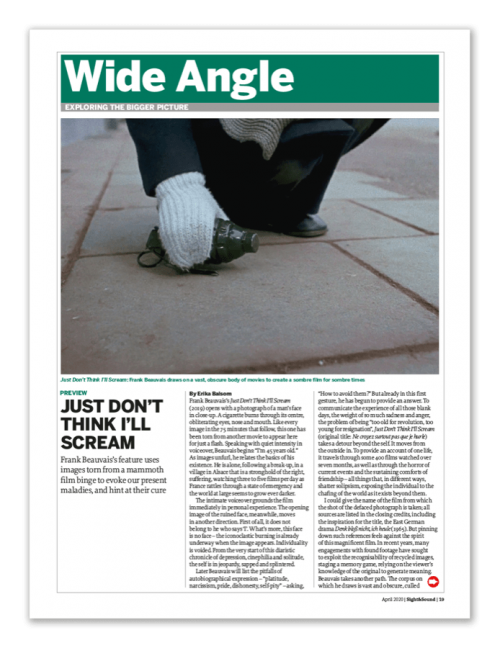 Frank Beauvais’s feature uses images torn from a mammoth film binge to evoke our present maladies, and hint at their cure. By Erika Balsom.

The films of trash auteur Andy Milligan are even too bad to count as so-bad-they’re-good: and therein lies their greatness. By Kim Newman. 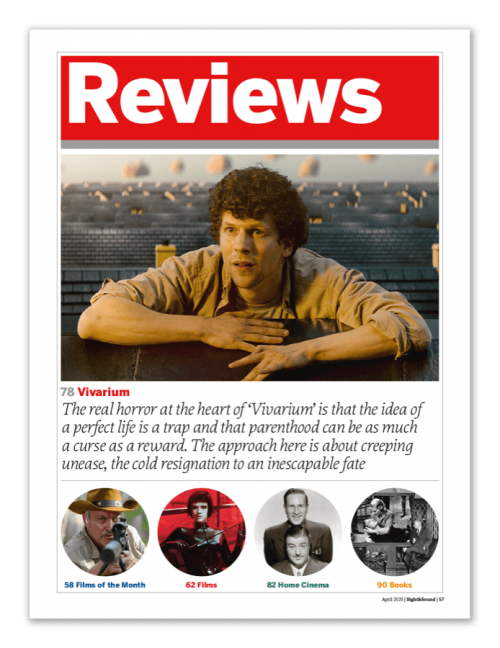 And Then We Danced
Arracht
The Australian Dream
Bad Boys for Life
Best Before Death
Birds of Prey
Calm with Horses
Carmilla
Cunningham
Dogs Don’t Wear Pants
Dolittle
Downhill
Emma.
Escape from Pretoria
The Great Buster
The Jesus Rolls
Koko-di Koko-da
Military Wives
The Painted Bird
The Perfect Candidate
Radioactive
The Rhythm Section
Run
Sulphur and White
To All the Boys
Toni Morrison: The Pieces I Am
The Truth
The Turning
Vivarium
The Whalebone Box
When Lambs Become Lions
The Wild Goose Lake 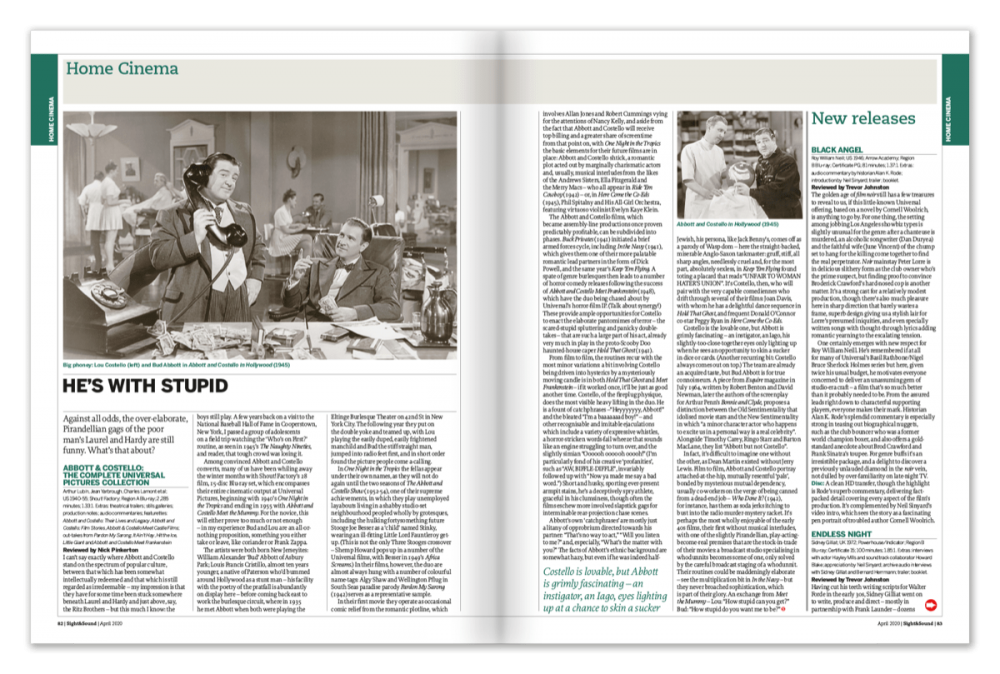 Against all odds, the over-elaborate, Pirandellian gags of the poor man’s Laurel and Hardy are still funny. What’s that about? By Nick Pinkerton.

Streaming: Made in Heaven

A series about a pair of New Delhi-based wedding planners is proving a good match in the booming Indian streaming market. By Naman Ramachandran.

The late José Luis Cuerda’s satirical masterpiece has not travelled outside Spain: it’s long past time that situation changed. By Mar Diestro-Dópido. 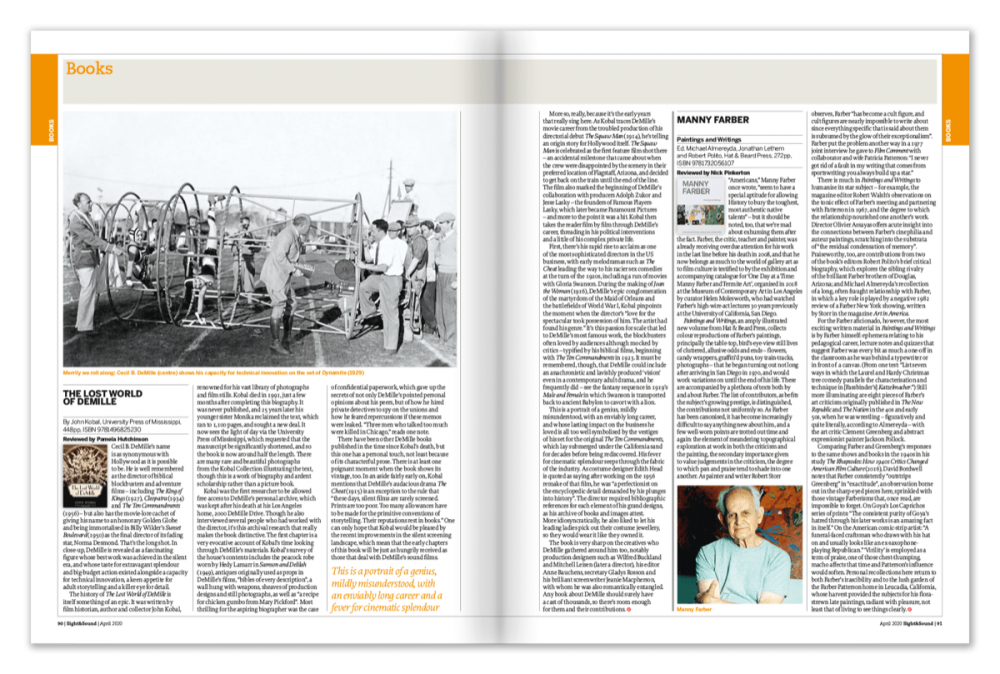 Say What Happened: A Story of Documentaries by Nick Fraser (Faber & Faber) reviewed by Nick Bradshaw 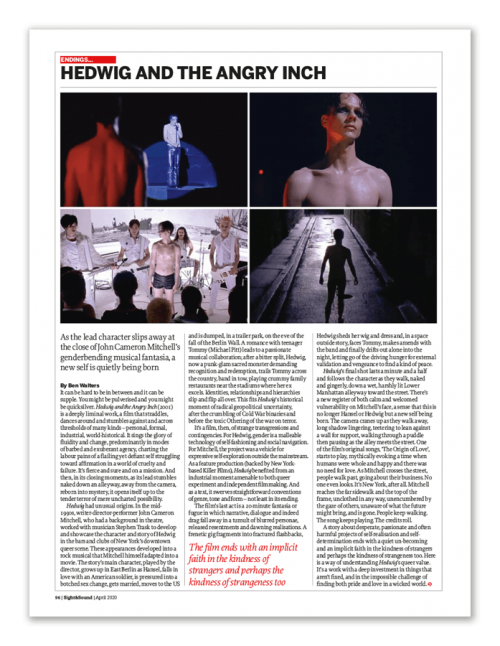 The Lighthouse’s echoes of The Gold Rush

Deneuve and Dorléac also co-starred in…

Hedwig and the Angry Inch

As the lead character slips away at the close of John Cameron Mitchell’s genderbending musical fantasia, a new self is quietly being born. By Ben Walters.