The best indie animation of 2014

Beyond the success of studio features from The Lego Movie (the year’s top-grossing movie in the UK) to The Boxtrolls and The Book of Life, independent cartoon art notched up plenty of excitements of its own, from the pick of film schools to certain elders’ continued ability to stir up a storm.

Jez Stewart inspects the year’s best of British, while (beneath) Chris Robinson surveys the international scene.

Before we tackle 2014’s crop, it’s worth remembering that much of the year in animation was taken up with the centenaries of two legends of the industry. The Centre for the Moving Image’s McLaren 2014 events did an enormous amount to celebrate and share the legacy of Norman McLaren (1914-87), with screenings and events across the country. The lesser-known Joy Batchelor (1914-91) – co-director of Animal Farm (1954) amongst many, many other things – was also brought back into the spotlight, most succinctly and engagingly in this short film tribute by her daughter.

In terms of new films, the year’s awards and festivals were still dominated by the big post-graduate animation courses – most notably the National Film and Television School and Royal College of Art. 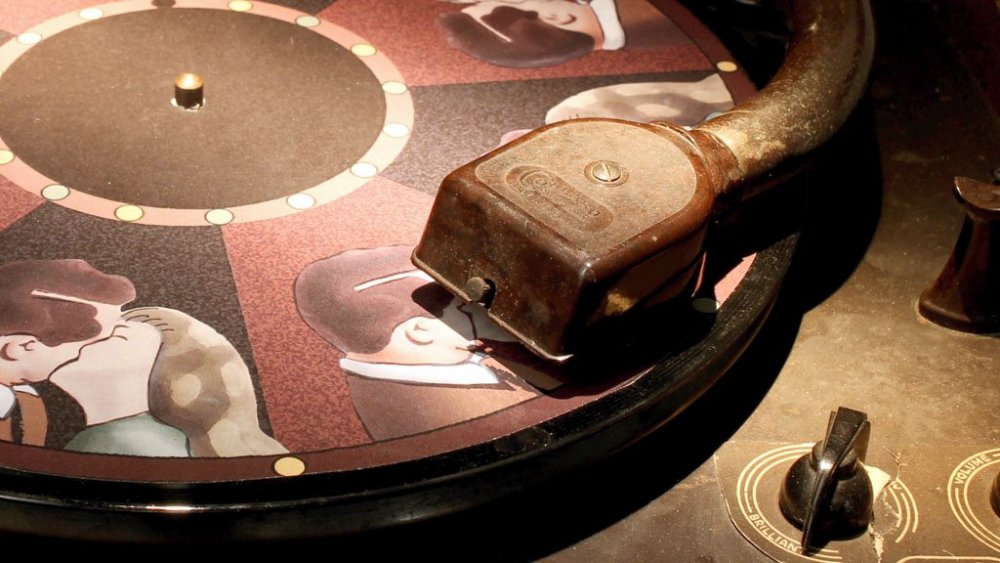 Mend and Make Do by National Film and Television School graduate Bexie Bush.

Eight animation directors graduated from the NFTS, each of their films bolstered by contributions from fellow students on the cinematography, production, script-writing and music courses. This resourced, collaborative approach invariably results in movies of impeccable quality but does not guarantee great art. Not a problem this year, with honourable mentions due to Kasia Nalewajka’s Pineapple Calamari [trailer] and Bexie Bush’s Mend and Make Do [trailer].

Twenty graduated from the RCA course, where the results are generally more individual in approach, experimental in technique and narrative (if any), and consequently scattergun. While some this year have quickly faded from my memory, the highlights were great.

The challenge for these now independent animators, and many others like them, is to make their next film on their terms (or as close as that is ever feasible) in a climate of minimal financial support. And maybe, just maybe, whether it is through cheaper technical costs, Kickstarter or sheer bloody mindedness, things are getting a little better? Mikey Please’s Marilyn Miller [homepage], Ainslie Henderson and Will Anderson’s Monkey Love Experiments [Tumblr] and the Brothers McLeod’s 365 [homepage] are just some of the films to show the potential of the independent animated short, and two more make my list below.

You may notice however that these are all blokes, which should take us back to the legacy of Joy Batchelor’s career. Many of the strongest graduation films this year were by women, so let’s hope they have the opportunities, talents, support, determination and luck to continue.

* Note: Because most animation festivals insist that submitted films are not already available online, most filmmakers hold them offline for 12-18 months. Enjoy the trailers, check out their other work and follow them for developments.

Five of the best

My favourite of the RCA films, and probably my highlight of the year. Picture Dave (Mr. Benn) McKee’s visuals adorned with boiling, washed-out Roobarb style colouring, then add razor-sharp edits that punctuate an offbeat narrative like knife wounds. “There are small people wearing hats in the society” is all the synopsis offers us. You’ll never forget them.

This NFTS film has been hoovering up awards at festivals – and has now garnered nominations for both a BAFTA and an Oscar – with good reason. It’s a moving story of two adult brothers dealing with their ageing mother, told through life-size painted 2D animation, augmented with bursts of 3D object stop-motion. Some of the monumental efforts involved in such a project are detailed in this making-of.

In recording a play-through tribute to a favourite retro space-simulator game, a YouTube user inadvertently captures a personal breakdown. This clever script is skilfully and affectionately executed by an RCA alumni whose 2008 graduation film Rabbit Punch [Vimeo] was a highlight of recent years.

Montreal artist Nicolas Ménard’s two years at the RCA have resulted in two great films that visually reveal his background in screen printing through thick lines and simple but arresting colour palettes. His first-year film Somewhere [Vimeo, 2013] was a moving study of alienation and absence. Loop Ring Chop Drink adds more stories, a surreal edge and a quiet subversive humour.

A fascinating development in the work of this recent graduate of the Glasgow School of Art, whose previous films used mixed media on paper. The images and sound were drawn directly onto 16mm film, with the sounds sampled and embellished by Robbie Gunn into the ‘dub’ to match Ross’s ‘scribbles’. Whether directly or indirectly inspired by McLaren’s centenary, it’s a timely tour de force and yet to hit the festival circuit, so enjoy it in 2015.

Indie animation had quite the schizophrenic year in 2014.

On one end, a number of films took on some personal and weighty subject matter, addressing issues of domestic, sexual and gun violence (check out the powerful PSA Monster in the Closet, which eerily anticipates a recent US gun fatality involving a child), mental illness (Through the Hawthorn), alcoholism (Soif) and drug addiction (Nuggets). 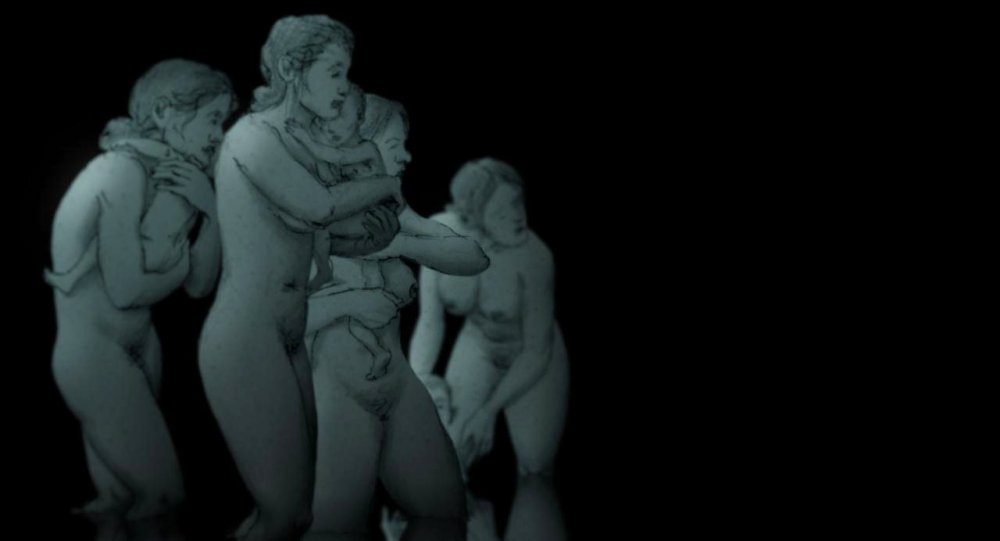 Leading the charge was Piotr Dumała’s Hipopotamy [trailer], a horror story/meditation on male violence that finds human figures standing in for hippos (whose males are known to kill their young in order to regain their dominance of the female/family). This balletic choreography of brutal violence sent minor shockwaves throughout the relatively conservation animation community for its perceived misogynistic tones – but the negative reaction didn’t deter festival juries around the world from festooning it with awards.

Another film that had people squirming in their comfy chairs was the sand-animation short Pilots on the Way Home by Estonian master Priit Pärn (Breakfast on the Grass et al) and his wife Olga. As with Hipoppotamy, there were those who felt this graphic, sexually charged satire on male fantasy and desire portrayed women in a problematic way – and again, this didn’t stop the film from appearing on many critics’ year-end lists. (Yes, most of them male. No, you won’t see the film on my list, but not for that reason.)

Fortunately there were plenty of comic tonics to sip on in counterbalance. Irish wunderkind David OReilly (The External World, Please Say Something) returned with a demented anti-video game (Mountain) and a series of hilarious faux North Korean propaganda films that were funnier than anything in the ‘controversial’ The Interview), along with his memorable animation sequences from the Spike Jonze feature Her.

Other comic highlights included Nils Hedinger’s Timber (about homicidal pieces of wood), the rap parody Butter Ya’ Self by Julian Petschek, Lesley the Pony Has an A+ Day (see below), the Brothers McLeod’s gut-bustingly absurd 365 and Vince Collin’s bizarre surrealist Animation School Dropout. But these are my 2014 favourites…

Ten of the best

We Can’t Live without Cosmos 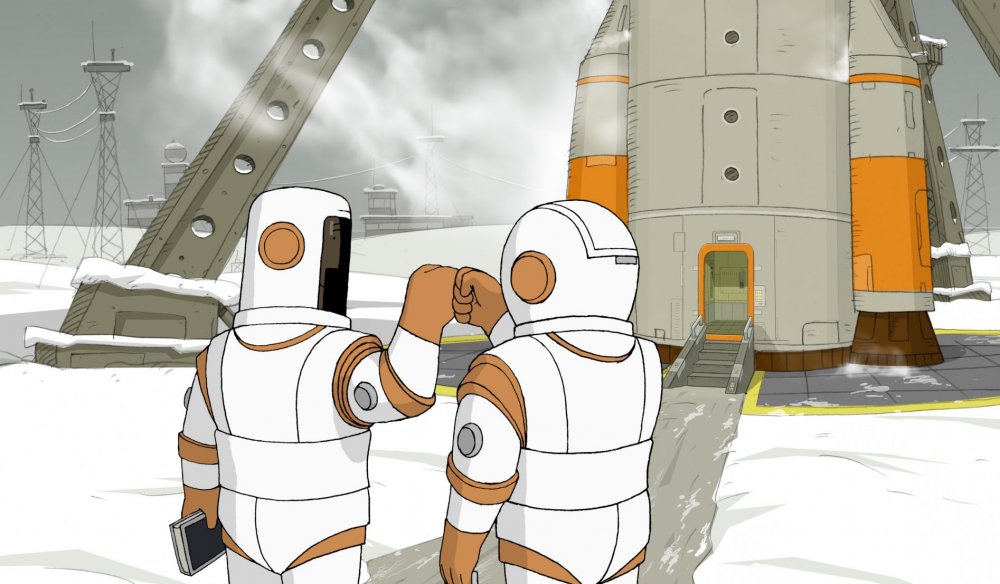 The Russian animator’s latest is by no means conceptually or technically revolutionary. It’s a (relatively) straightforward narrative about two lifelong friends who achieve their dream of becoming astronauts, only to see it turn to tragedy. Bronzit has constructed a simple, understated and finely tuned work of beauty that seamlessly blends comedy and tragedy.

The Pride of Strathmoor

Set in the late 1920s in Georgia, this masterful hand-drawn student film serves up a delirious dish of Gothic/noir madness that could have been a lost collaboration between Nick Tosches and Ralph Steadman. Baldvin’s faux diary, coffee strains animation, claustrophobic setting create an unsettling portrait of the American South seen through the eyes of a madman.

With dashes of Rashomon, Tarantino and the work of German animator Gil Alkabetz (Yankale), this befuddling, hilarious and rapid-fire brainteaser serves up the story of a horse in five different ways. I’m still not sure exactly what the fuck is going on except that there’s a horse, gun, referee and a boxer – and I love it each and every time I view it.

Stretch’s unusual techniques (a combination, he says, of “stop-motion, HRD, street/landscape animation and some frame-blending in post”) give this choral music video (which took a year to make) a restless, ethereal quality. Nothing, no one is still. The landscapes, seasons, figures are in a constant state of flux and unrest in Stretch’s time lapse/stop motion landscape.

Using a mix of 3D computer, live action and stop-motion puppets, Henderson (who also made one of the finest music videos of the year, Moving On) and Anderson have created a highly original and poignant film that looks like it was found on the shelf of a 1960s puppet-animation studio in the former Soviet Union. It’s got delusions, disappointment, heartbreak, space travel and a very unfortunate monkey.

Early in his career Hykade made two epic films: We Lived in Grass (1995) and Ring of Fire (2000). Since then he’s settled down as a sort of wise old bluesman of animation, churning out potent little songs of beauty and pain like The Runt. His latest is an unemotional and blunt depiction of addiction that uses just a line, an egg and a bird.

It was a good year for Polish animation. Not to be out done by his countryman Piotr Dumała, newcomer Tomek Ducki took home a number of festival prizes for this, his first professional film. With each splash of the film’s elderly swimmers, Ducki plunges the viewer uncontrollably in out of reality and fantasy and, ultimately, life and death.

Lesley the Pony Has an A+ Day

A dark and demented piece of silliness that nails the frequently hilarious, surreal and hyper-violent world of children’s drawings.

Upon first glance, it’s easy to swim in the innocence of Lesley’s song and joyful gallop and emerge soaked from a flood of tearful laughter, but look closer and you might find a ghastly horror film about child abuse.

A danse macabre with a bottle, made in Cournoyer’s familiar hand-drawn metamorphic style, Soif depicts a woman’s relationship with that tantalising old demon alcohol. Like the flow of a drunken night, the woman shifts, bobs, weaves and stumbles through a life soaked in booze until it finally threatens to submerge her once and for all.

A manic, multilayered narrative about the adventures of a bear with no nose and a boy on a space station, this shrewdly mixes varied animation techniques to portray somehow lovingly a world that’s not particularly pleasant.