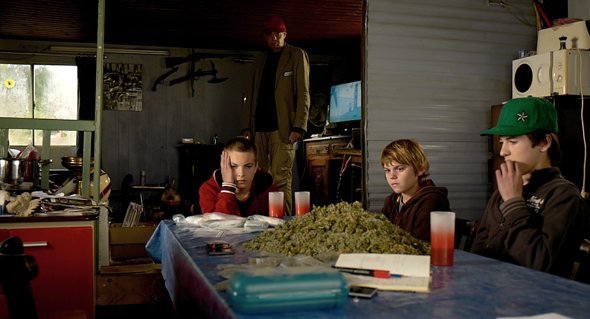 Fifteen is a difficult age for boys – no longer a child but hardly tough or streetwise enough to square up to older lads on the very cusp of adulthood. A time of yearning, frustration and not a little anxiety, it’s territory that has been effectively mined by Shane Meadows in the likes of Somers Town (2008).

This third directorial outing for noted Belgian comic actor Bouli Lanners – known for his collaborations with black humorists Gustave de Kervern and Benoît Delépine, including his semi-legendary karaoke rendition of ‘Sunny’ in their cult favourite Aaltra (2004) – certainly overlaps with Meadows in terms of theme and subject-matter, yet the cinematic sensibility is rather different, Lanners’s saga of errant adolescence laid out in painterly, composed widescreen frames suggesting a kind of mythologising for the story’s happy-scrappy central trio.

Brothers Zak and Seth have been left to their own devices in their late grandpa’s rather shabby country house, but this is no carefree idyll. Sure, they can hang out with pal Dany, smoke a little weed and nick supplies from their neighbour’s cellar, but when the money runs out, what’s next? Their misadventures include rowing downriver in a stolen boat, camping out overnight, even breaking into a presumed-vacant holiday home where they empty the cocktail cabinet and hit the peroxide in the bathroom cupboard – but all this is displacement activity for an unavoidable reckoning with the adult world.

They cook up a money-spinning scheme but it gets them mixed up with a somewhat scary oddball named Beef, a cannabis supplier rumoured to have killed a man with a death-stare. We assume there can only be one winner in this off-kilter encounter, especially when the villain hires Dany’s abusive older sibling Angel as the muscle to seal his crooked deal. So much for paddling around and messing about – this is the real world and it’s cruel. 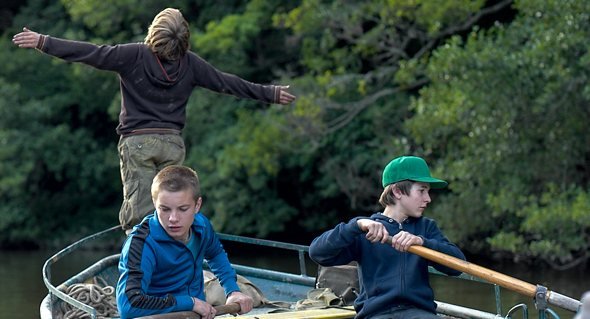 Lanners, though, isn’t one for the dramatic confrontation, or indeed the carefully plotted narrative trajectory you’ll find in, say, Rob Reiner’s Stand by Me (1986). His approach is elliptical, setting out scenes in a tableaux style so that they have time to register visually, then moving us on to the next episode. Some viewers may find this somewhat exasperating, as if he’s never really clarifying the key turning points or making the most of his material. The three young performers are so assured throughout, whether suggesting the deep hurt caused by maternal absence or discussing the masturbatory benefits of chilli sauce, that we’re left wondering whether the story might have generated even more impact by pushing them that bit harder emotionally.

Still, while there’s enough rudery to convey the kids’ eagerness to partake of adult pleasures, the emphasis on boating, camping and secret forest hideaways surely points us in the direction of children’s literature of yesteryear – was Enid Blyton big in Belgium? Taken together with the pronounced mythologising of Lanners’s widescreen vistas (whose river views in fact derive from locations in Luxembourg), it seems that the essence of the film is actually about pitting the innocent optimism of old-school children’s stories against the gnarly demands of growing up today.

Shifting into a fabulist mode for the final landscape shot leaves it to the viewers to ponder the outcome for our resilient trio – heroic affirmation or hopeless abnegation? The answer perhaps is found in each viewer’s own capacity to reconnect with their inner child. As such, this is a film that stays with you, resonating deeper than many a more cut-and-dried rites-of-passage tale.