In this issue: Harmony Korine’s Spring Breakers, plus Pedro Almodóvar’s I’m So Excited!, In the Fog, Scarecrow, the history of the music videos and the roots of neorealism. In print and digital from 5 April. 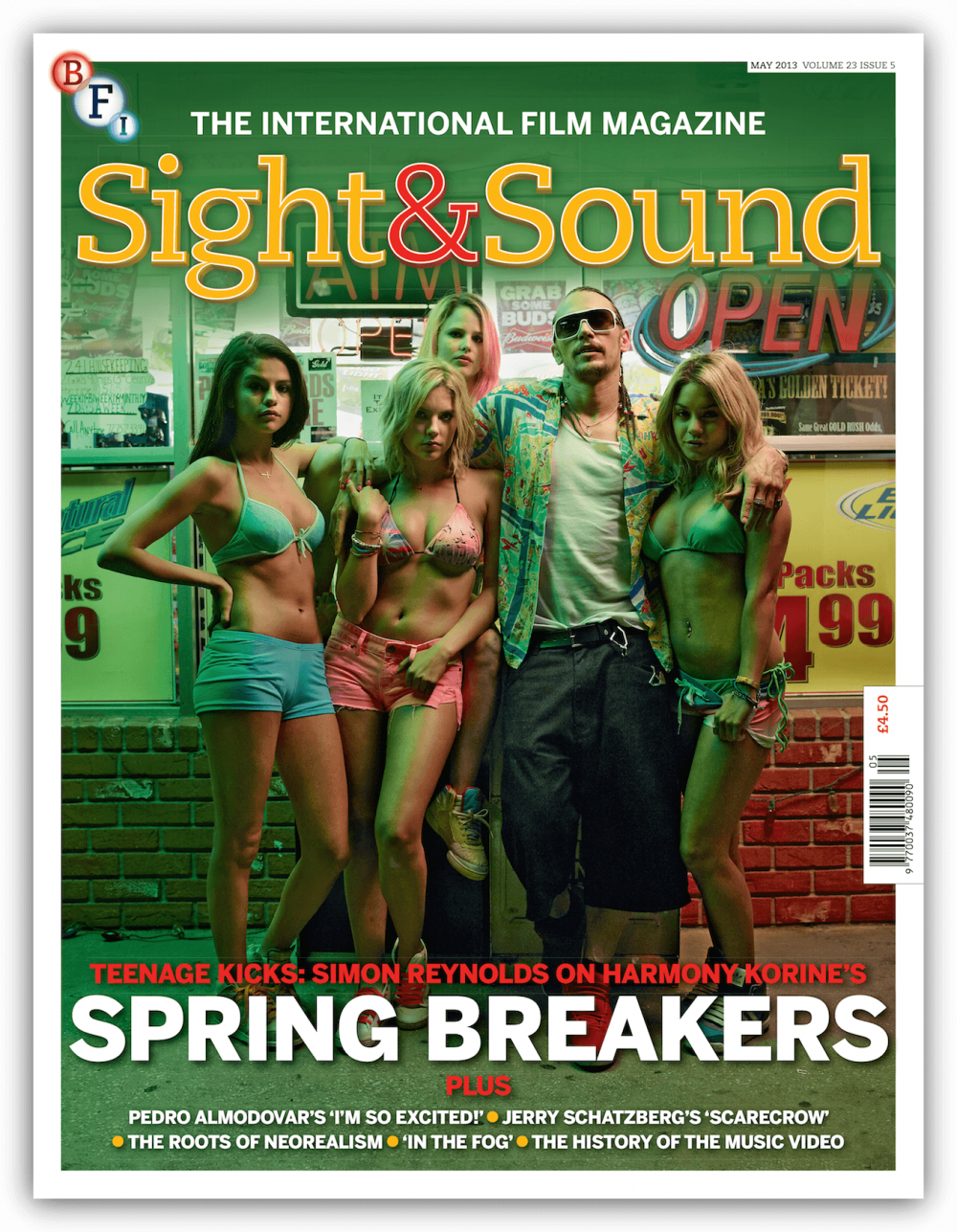 Dreaming of spring, our May issue goes wild with Harmony Korine’s gun-crazy Spring Breakers, plunging us into the carnival of that all-American institution. Simon Reynolds looks beneath the indie-exploitation surface, while Korine talks dazed-glo aesthetics with Amy Taubin.

Also featured this month are I’m So Excited, the latest from Pedro Almodóvar, who talks to us about blending the US screwball tradition with Mediterranean comedy – and In the Fog, a stunning WWII drama from Sergei Loznitsa, formerly one of Russia’s most consistently fearless documentarists.

Our quarterly Deep Focus feature gives you a heads-up on the Roots of Neorealism before a tie-in season at the BFI Southbank in May, and we also look back at Jerry Schatzberg’s downbeat 1973 road movie Scarecrow (back in cinemas this month), Francesco Rosi’s tense crime-thriller exposés of Italian public life, and the history and current crossroads of the music video.

Cover feature: You only live once

Harmony Korine’s Spring Breakers, plunging us into the distinctly American carnival that is Spring Break, is marked by a steadfast refusal to judge its characters’ antics. So is it just a gun-crazy Girls Gone Wild or is there something more in the mix? By Simon Reynolds.

PLUS Amy Taubin talks to the director about his dazed-glo aesthetic.

Pedro Almodóvar’s I’m so Excited! is a return to the carnality and earthy language of his early work, framed as a camp screwball comedy but shot through with merciless satire. As his native Spain struggles against austerity, it’s a timely dissection of deceit and wilful forgetting. By Maria Delgado.

PLUS Pedro Almodóvar on how his new film blends the US screwball tradition and Mediterranean comedy.

Men of shadows and fog

With its classical hero and traditional structure, Sergei Loznitsa’s second feature In the Fog is the furthest venture into fiction yet for a filmmaker who began as one of Russia’s most consistently fearless documentarists. By Anna Fomicheva.

PLUS Michael Brooke on how Russian filmmakers have represented the ‘Great Patriotic War’ on screen.

A Palme d’Or-winner in 1973, the downbeat road movie Scarecrow sidestepped the early-1970s vogue for countercultural hokum and, for its director Jerry Schatzberg, has hardly aged at all. Back in cinemas this month, it stands up as a heartfelt study of friendship and faint hope. By Peter Tonguette.

With nods to both neorealism and cinéma vérité, Francesco Rosi’s tense thrillers and crime procedurals have probed the darkness at the heart of Italian public life for 40 years. But don’t call him a ‘political’ filmmaker. By Peter Cowie.

As a new exhibition traces the history of the pop video and its cross-fertilisation with cinema back as far as the 1920s, the form itself is at a crossroads in an age of YouTube and falling record-company revenues. By Sam Davies.

Deep focus: The roots of neorealism

Italian filmmakers in the immediate post-war period created their own cinematic language to capture the hardships of everyday life in a shattered nation. But though revolutionary in impact, the new realism was not a complete break with the past. Its roots went deep, to the work of directors in Italy and beyond which, over preceding decades, had prefigured the themes and formal innovation of a style that would become one of cinema’s most influential movements. By Pasquale Iannone.

Editorial: A culture of talk.

Object Lesson: Hannah McGill on the Bible in the movies.

Dispatches: Mark Cousins offers his perspective on the Z factor in film.

The Numbers: Charles Gant on the ongoing success of Dogwoof’s live documentary events.

Amid the inevitable festival repeats, Nick Pinkerton managed to uncover a few gems at South by Southwest.

Nick Bradshaw on the delightful intimacy of the Spanish documentary festival Play-Doc.

Lost and Found: Michael Koresky on the Freudian pleasures of Bernard Rose’s Paperhouse.

Chris Petit on his post-cinema art project the Museum of Loneliness.

Sukhdev Sandhu enjoys the eccentric wit of the films of B.S. Johnson.

Graham Fuller on sex and lucre in Samson and Delilah.

Michael Atkinson explores the unsettling brilliance of Wake in Fright.

Alois Nebel, Baise-moi, Films by Claude Chabrol, City of Women, La Dame de pique, Diary of a Chambermaid, The Murderer Lives at 21, The Red Menace, Swandown, Tess, The Third Girl from the Left

Linda Ruth Williams surveys an instructuve overview of 100 years of the BBFC.

Jane Giles is fascinated by a 1920s novelisation of Hollywood’s first vampire movie.