Film of the week: The Place Beyond the Pines 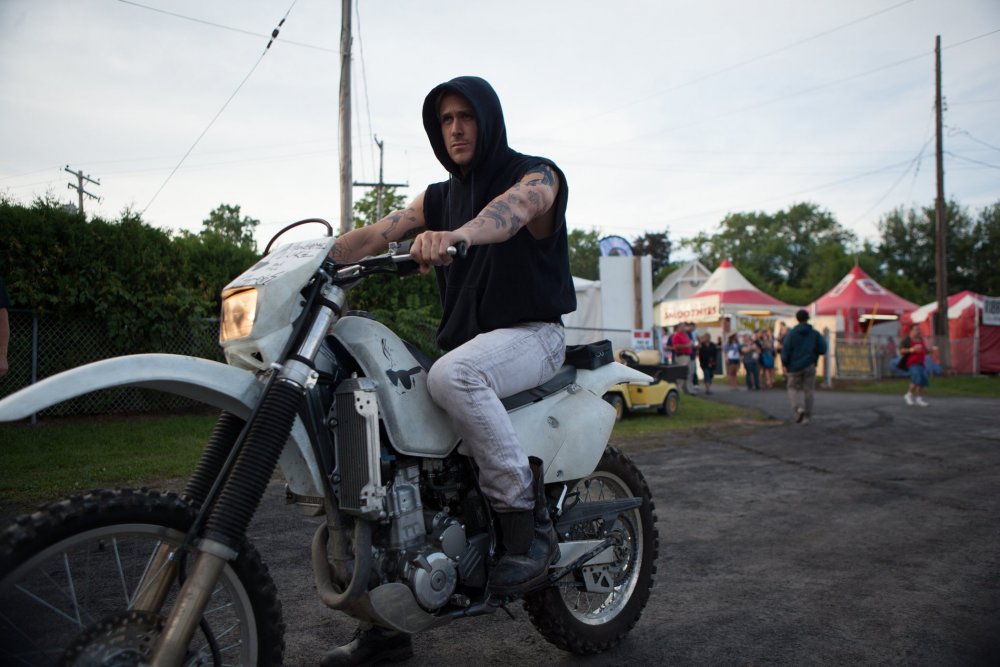 There’s a scene in Derek Cianfrance’s latest film in which carnival stuntman Luke Glanton (Ryan Gosling) tears through a forest on his motorcycle. The camera ducks and dives to stay level with him, till he catches sight of another rider keeping pace on a parallel path, and he’s shrink-wrapped in a tight frame.

The leaves rush by, a green crosshatch, as the camera switches between riders, and Luke – square in the middle of the screen – looks, for all his speed, to be motionless. Little does he know that he has locked eyes with the man who will set him on the path to self-destruction. There’s urgency and a ponderous fatality to this moment – quick and slow – which encapsulates the film’s (almost) conclusive perception of its characters: that though life may move around them, they are unalterably themselves, and getting nowhere.

The third film from director Cianfrance (with a soft C) is inclined to this sort of symbolism in a way that his last, Blue Valentine (2010), was not. A naturalistic capsule-study of one love’s genesis and degeneration – also starring Gosling, alongside Michelle Williams – Blue Valentine engendered a lot of pre-release fuss when it got around that the two lead actors had improvised the lion’s share of dialogue. When it finally hit screens, the procurement of the film’s central performances mattered not at all, because its director had created an absorbing chiaroscuro universe of butterfly emotion turned prosaic, dexterously collaging the now and then.

With The Place Beyond the Pines, Cianfrance moves into vastly different territory. An expansive, many-textured epic in two parts, shot on location in Schenectady, New York, the film explores the bloodline tie between two adolescent boys (the second part) and their absent fathers (the first). Using an ensemble cast, live locations and more than ten times the budget of previous productions, it’s an ambitious work of a far larger scope than the director is used to collaring.

It’s not to be expected that he would succeed outright in making so giant a leap from lo-fi indie to blockbuster – it’s been the downfall of numerous others – and he hasn’t made it easy on himself. The film spans nearly two decades, with a jump to ‘15 years later’ at the halfway mark, and it runs to two and a half hours. In fact, it’s an eloquent, engaging debut-of-scale, pensive and pacy by turns, and one which speaks of more filmmaking experience than Cianfrance has had time to accumulate.

Pines opens on a tattooed Luke as he makes his way over to a circus tent to perform in a three-man motorcycle stunt in the globe of death. When he finishes, he sees Romina (Eva Mendes), an old flame of a year earlier. It isn’t long before he learns, unceremoniously, that she’s had his baby, Jason, and has settled down with new man Kofi, who is the model of constancy and togetherness. 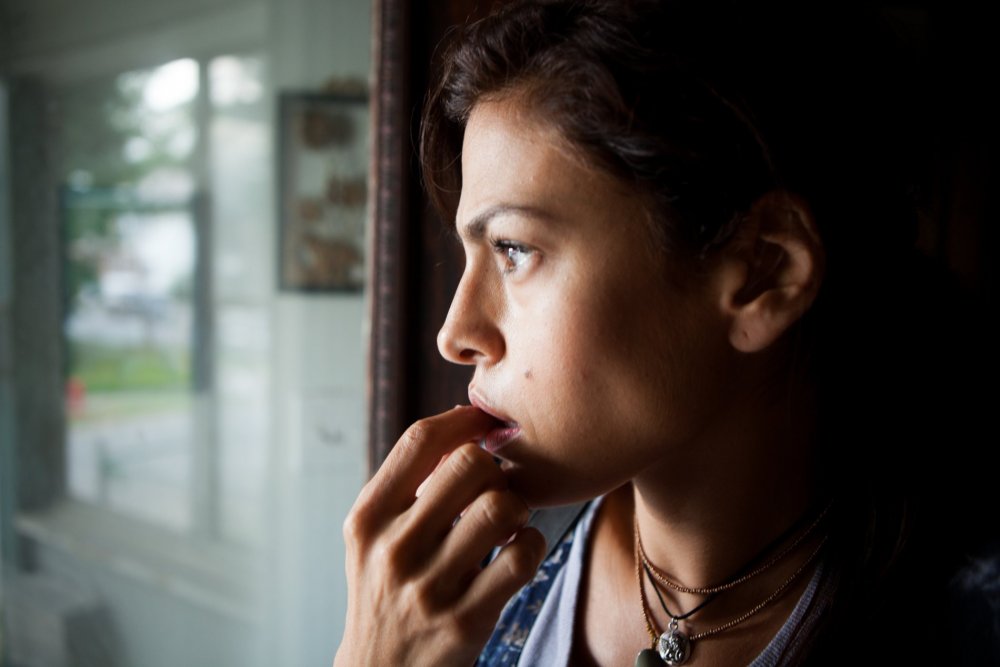 Luke and Ro spend a day together, and he tries to persuade her, with small-town charisma, to invite him to take back his family. But Romina is realistic: he’s far too restive to be depended upon, and Mendes puts this across in poignant shorthand, averting her face to hide a hurt no fault of her own, as they lie together naked in his trailer.

When Luke meets car repairman Robin – the mystery rider in the woods – he turns to serial bank robbery to prove his solvency, but it spirals swiftly out of his control. Ignoring a warning from Robin, he blunders a job and is killed in a mishap shooting by trigger-happy trainee cop Avery Cross, played by Bradley Cooper.

It’s a bold move to get rid of Gosling so early in the film, because the actor brings a red-raw vitality to his performance. There follows something of a temporary slump on his replacement with the far less soluble Avery. But as the only character to substantially occupy both halves – his rookie indiscretion emerging as the linchpin of the story – Avery grows more interesting as the film goes on.

This is especially the case in the second chapter, which sees the sons of Avery and Luke – both now 16 – edging closer to uncovering the painful truth of their connection. The older Avery, having blackmailed his way into the role of district attorney and in the midst of a political campaign, is living with the consequences of neglecting his son out of an indomitable lust for success.

Somehow, still, one feels for him, as a man substituting ambition for intuitive talent: life so far has shown that he gets results by hard work, dedication and an ace in the pack, not by any natural aptitude. For Avery, there’s a disconnect between his professional and private self. Coming to after surgery following his shootout with Luke, the first words out of his mouth are: “What happened to the other guy? Did he have a family?” Avery is instinctively compassionate, but when something’s right in front of him – when he’s face to face with Luke, when it’s his own son – his good conscience isn’t operative. 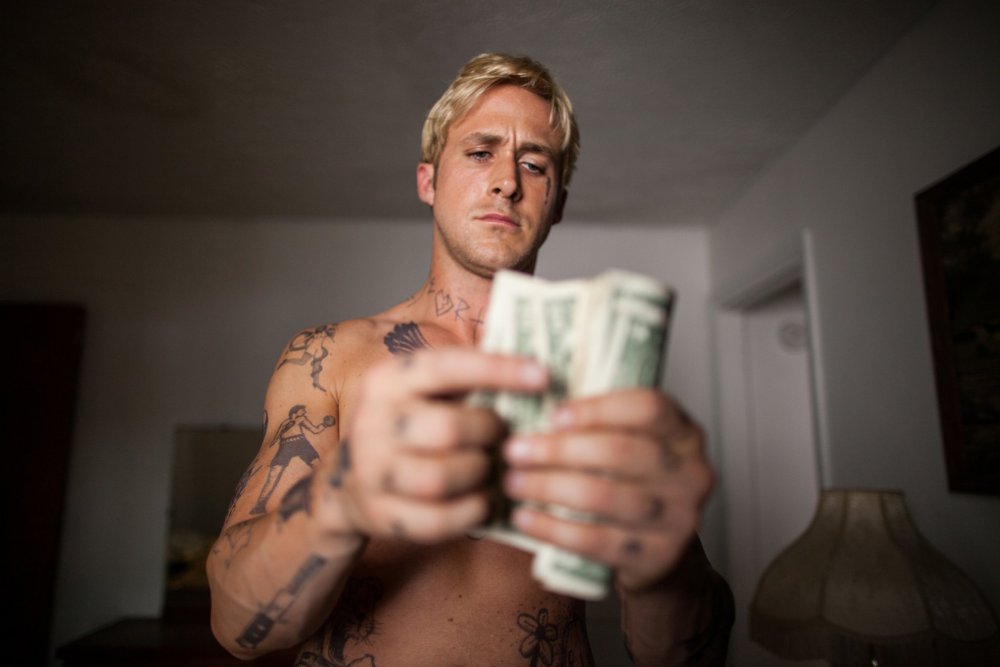 Where Blue Valentine was stylistically coherent, Pines spins genres. Texas-born British cinematographer Sean Bobbitt – who has worked with artist-turned-filmmaker Steve McQueen on all three of his features to date (Hunger, Shame and the upcoming 12 Years a Slave) – shot the film on 35mm, and his experimenting with nostalgic composition yields beautiful results.

The same goes for the editing: a blue-filter fadeout from husband and wife abed to an overhanging shot of their white-collar home recalls 1980s Michael Mann, and there are traces of Terrence Malick in the disembodied conversation overlaying tableaux of like-souls Robin and Luke, including a long-shot of a half-tight Robin chasing geese in the driving rain.

In fact, the film shares with Days of Heaven (1978) a certain narrative tone, in so much as it feels both immediate and remembered, as though its players were predestined to act and end as they do. Cianfrance has said that he wanted it to play out “like a storybook”, and achieves this with leaps and bounds in time, quick cutaways and a liquid topography. It’s a mélange that works, and it’s mirrored in the director’s choice of music, mixing diegetic anthems such as Springsteen’s ‘Dancing in the Dark’ with ex-cathedra chorales and an original piano theme by Mike Patton, so gorgeously evocative that it sends one combing for deeper-hidden meaning with every use.

With any trans-generational narrative without a dominant central character, there’s a risk of obscuring the heart of the film. Cianfrance cites the second act as the “real film” – the story in earnest – but leaves no breadcrumb trail to help his audience to the same understanding.

The film is perhaps overlong, and loses momentum three-quarters of the way in – not helped by the tonal shift in the second act, an almost two-hander of such extraordinary high tension that it borders on the homoerotic. However, newcomers Dane DeHaan and Emory Cohen so impress with the pathos and maturity of their performances that the film holds attention to the end.

‘The sins of the father visited upon the sons’ is a difficult theme to pull off, but Pines fares better than Elia Kazan did with his 1955 adaptation of John Steinbeck’s East of Eden, which similarly traced parental heredity in two teenagers. Grand, plangent and innervating, Cianfrance’s latest is more than adequate proof that he’s as cut out for the big as for the small of cinema.