The Danish dean of neo-noir shifts down a gear or three with an excursion in slow TV that etches Los Angeles’s human absences – beginning with Miles Teller’s icy cop-cum-hitman. To judge by two episodes previewed at Cannes, it’s not a pulse-racing prospect. 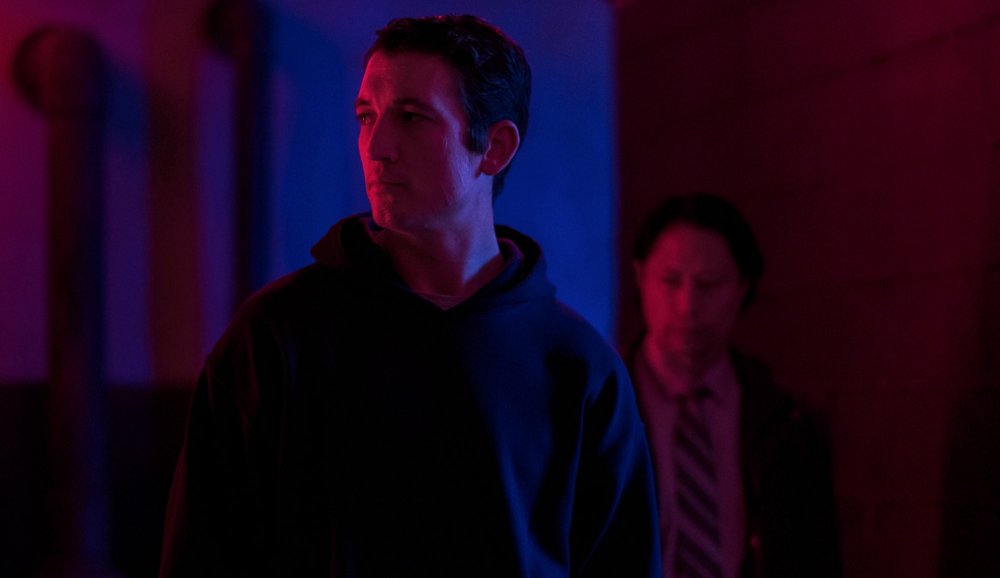 Miles Teller as Martin in Too Old to Die Young: North of Hollywood, West of Hell

There’s a subtle but critical difference between telling a story about cultural antipathy that enables fascism, misogyny and ruthless violence, and telling a story that is so formally apathetic it merely becomes part of the problem. In neon-noir crime thriller Too Old to Die Young, which sees rogue police officer Martin (Miles Teller) moonlighting as a moral-high-ground hitman, it’s difficult to say whether writer-director Nicolas Winding Refn’s first original television series falls into the former or latter category. Parts of a ten-part Amazon Prime series set for release in June 2019, episodes 4 and 5 (selected for Cannes) come tantalisingly close to realising a stylish commentary on how violent manifestations of masculinity remain unchecked or are encouraged in contemporary society. However, with an aesthetic so nonchalant that every murder and rape feels like a casual shrug, and a deadpan performance from Teller that would easily win a children’s game of musical statues, it never gets close enough.

The two premiered episodes are unlikely to offer any real surprises for people familiar with Refn’s cinematic back catalogue (Drive, Only God Forgives, The Neon Demon). The action is set almost exclusively in the night-time nowhere land of LA. Seen from above, roads are impenetrable waves of head and tail lights undulating through the hills; on sidewalks, at ice rinks, in apartments and bars, people are few and crowds are non-existent. Human life and emotions are so sparse they figure more as set dressing than main features for the lurid neon lights that creep with soft edges through windows and permeate the still life framings of eerily motionless scenes. Too Old to Die Young is cold and empty, with the restless camera more interested in what is not there – the empty chair at a PTSD group therapy meeting, a stark desert landscape – than the characters who populate the narrative. Borrowing from European arthouse traditions with extreme long-takes and prolonged silences, it’s an almost Lynchian attempt to experiment with televisual form, and it will likely be a challenging watch on smaller screens in domestic, and more distracting, environments.

Teller with John Hawkes as George

Even in a cinema, though, Too Old to Die Young is far from an easy, or even particularly enjoyable, viewing experience. From the opening shot of episode 4 to the closing one of episode 5, women’s bodies appear as corpse-like objects that are ripped straight from the pages of diet ads in fashion magazines. Occasional moments of dry humour are undercut by obvious narrative jokes (one involving an electric car fell particularly flat).

And one feels that Refn’s shift from feature film to series format hasn’t been entirely successful. Neither episode demonstrated the director’s comprehension of episodic storytelling, and the decision not to cut on what could have been a brilliant cliffhanger at the end of episode 5 was perplexing in the extreme. How the series will maintain viewers beyond hardcore Refn fans when it lacks any narrative breadcrumbs to keep audiences interested is as much a mystery as Martin’s rationale for killing.

Basing a review on just two episodes of Too Old to Die Young does require some generosity; perhaps with more context and a clearer character arc for Martin the substance of the series will equal the dark fluorescent style that’s on already on display. But two hours and 18 minutes should provide ample time to convince a viewer that they want more, and my own ambivalence about the show thus far comes only a close second to Martin’s cool impassiveness when he takes out his targets onscreen.