Lovie Simone as Selah in Selah and the Spades

It’s rare to see a powerful young black heroine outside the superhero genre, so this boarding-school thriller is remarkable from the outset. Tayarisha Poe’s first feature stars Lovie Simone as Selah, the 17-year-old leader of an organised drug gang. Intelligent, self-possessed and ambitious, Selah commands respect and fear from her peers. Her operation involves sidekicks who keep ledgers and beat up debtors, skilfully avoiding detection by the frustrated headmaster. While there are no overt references to films like The Godfather or Goodfellas, this is a movie about a mobster and the ruthless decisions she must make.

It is also a teen movie about the suffocating bond of female friendship. At the centre of the story is Selah’s relationship with her young new protegée, Paloma (Celeste O’Connor). Paloma is a photographer (like Tayarisha Poe), and meets Selah while taking pictures of her at cheerleading practice. Selah is not just her ideal photographic subject but her ideal mentor, and Paloma slips easily into her employ, with a lack of moral questioning that seems universal at this Bret Easton Ellis-flavoured institution. Both actors (especially O’Connor) convey an innocence that seems at odds with their actions, which at first makes the story feel less credible. But as the narrative develops, you wonder if this is a deliberate attempt to challenge accepted stereotypes, and prove that young women can be far more complex than they’re often given credit for.

Unlike an actual Easton Ellis adaptation, this movie does not involve sex. When questioned about her love life, Selah explains her celibacy to Paloma: “Why not just do things that keep you from crying in bathrooms?” Control is paramount to this young mobster, who faces the additional challenge of being underestimated due to her youth, gender and, perhaps, skin colour – though this last factor is barely mentioned in Haldwell School’s diverse environment. “When you’re 17 and when you’re a girl, you’ve got the whole world telling you what to do with your body,” Selah tells Paloma, explaining why the ‘Spirit Squad’ cheerleaders design their own uniforms: “Your mom tells you, ‘Change your dress…’ School tells you, ‘Cover your shoulders, cover your legs’… ’Cos they can’t tell boys to keep it in their pants?”

It’s a striking monologue, which stands out in a film whose characters are otherwise elusive. An early suggestion that Paloma is romantically attracted to Selah remains just that. Yet for all their distance, and despite Poe’s apparent interest in power dynamics rather than internal conflict, it is characters rather than plot that intrigue. 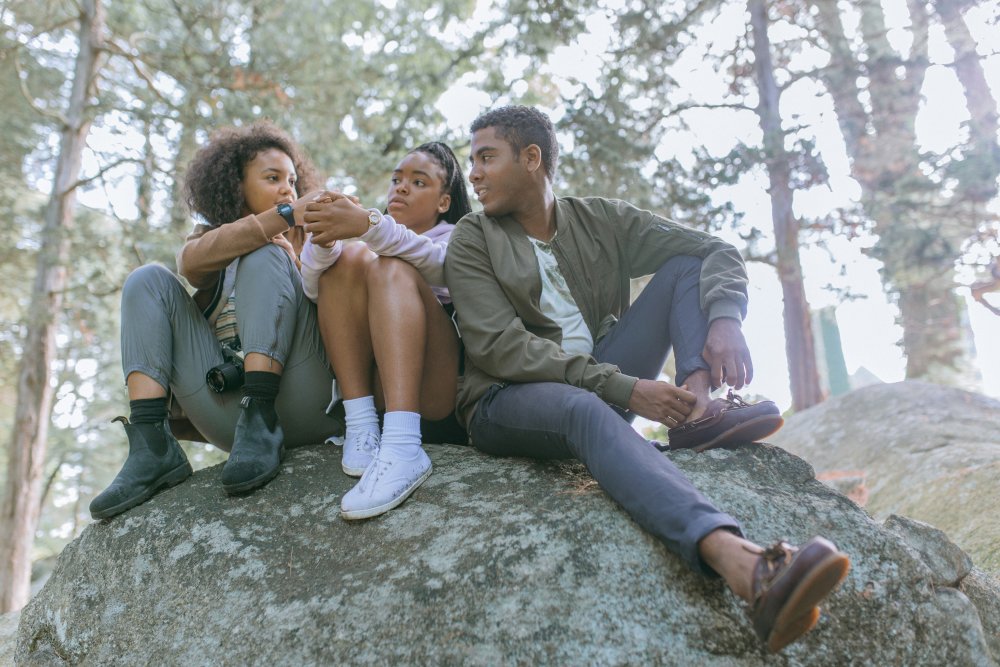 A compelling visual style helps hold the attention: cinematographer Jomo Fray favours symmetry and stylised shots with natural lighting, whether shooting Selah in her bedroom or out in the sunshine in the school’s expansive grounds. Everything in the film is visually attractive and highly styled: the darkness lurks underneath. Some scenes look like a professional Instagram post or a fashion shoot come to life, which reflects the film’s origins as an online multimedia project. It’s a style that suits the generation it depicts, although the internet is, like sex, conspicuous by its absence from the story.

The use of sound and music also bucks conventions of the high-school genre: a party scene plays out to a classical soundtrack, and Selah enters a house to the sound of wind chimes, a moment that feels more typical of an indie movie (the film was premiered at Sundance).

Selah and the Spades feels like an exciting debut rather than a satisfying feature. It’s notable for what it leaves out. Unlike a typical crime movie, there’s no interaction with law enforcement, no scenes down the police station, no major downfall. Parents and teachers hover at the sidelines, unable to exert authority or break into the bubble the students have formed around themselves. Unlike a standard teen movie, romance is relegated to the background. It is also missing certain high-school movie archetypes – there are no jocks here, no nerds: even the prefects are in on the deals. The only thing it has in common with most boarding-school movies is close friendships: these girls’ pranks are a good deal more sophisticated than those of the St Trinian’s girls. What’s perhaps most unusual is that this film featuring African-American leads doesn’t appear to be racially charged – though it’s interesting to note that the only white males with speaking parts finish beaten up or tied to a chair, caught in the crossfire of Selah and her Spades.