Film of the week: The Party skewers politics in black and white

Sally Potter probes liberty and the state of the Europe’s left in a fizzing musical house farce.

Five minutes into Sally Potter’s brisk, coruscatingly witty farce The Party, a disillusioned former activist named April arrives at a dinner party to celebrate her oldest friend’s appointment as shadow health minister, and describes the new politics as “postmodern, post-post-feminist”. It’s a clue to the film’s stakes: this is a comedy that bites because it is utterly and urgently of our moment. With the intelligence and generosity that are the hallmarks of Potter’s writing and direction, it issues its challenge of big ideas through superb performances: with the verve of a musician, Patricia Clarkson, as April, wraps her lips around the many zingers she delivers. Updating a long-running British tradition of cloaking scathing political insights with social comedy (the party refers to both ‘dinner’ and ‘Labour’), the film plays out like an extended version of the salon scene in Potter’s Orlando (1992), in which Alexander Pope and Jonathan Swift trade insults disguised as witticisms. Except that here, in the 21st century, it’s the female characters who are making all the running.

April is the caustic Fool to calm, collected Janet (Kristin Scott Thomas), who opens the film negotiating her arrival in the political mainstream, taking calls from colleagues whose congratulations mask requests for favours. Busy in the kitchen being the modern woman who has and does it all, she balances her BlackBerry with fiddly filo pastry, recalling Hillary Clinton gritting her teeth to submit a cookie recipe to Family Circle magazine in 1992. Beyond her echo of Clinton’s feminist claim to have put the “biggest crack in that glass ceiling”, Janet, with her concern for public health, harks back to the ‘spirit of ’45’ and the lineage of post-war social democracy. April, meanwhile, regards her second-wave feminism and civil-rights activism with conviction but without nostalgia, telling Janet: “Sisterhood is a very ageing concept, sweetheart.”

Janet’s husband Bill is a Christopher Hitchens-esque intellectual and libertarian whose personal health issues have led him to throw out both his socialist principles and his atheist convictions “I’m asking myself an unanswerable question… even a metaphysical question… why me?” – by seeing a private consultant, much to Janet’s dismay, and who appears to find faith in the spoutings of April’s hippie-healer boyfriend Gottfried. (“Scratch an aromatherapist and you’ll find a fascist,” spits April.) The film makes hay with the casting of Bruno Ganz as the beatifically useless Gottfried, an energy worker given to clichés whose emptiness echoes the current crisis in European liberal democracy.

Clarkson with Bruno Ganz as Gottfried

Representing more modern conflicts on the left spectrum are Tom (Cillian Murphy), an investment banker who gives a pointed speech about Bill and Janet’s comfortable wealth (but also confesses, “I can’t help anyone, I can’t even help myself” – never a truer word spoken about turbo-capitalism), and his wife Marianne, a spin doctor who never appears but certainly seems to have everyone, particularly Bill and Janet, in a spin. Rounding out the party are Bill’s academic colleague Martha (Cherry Jones), a verbally bullish feminist, and her pregnant younger wife Jinny (Emily Mortimer), a runner-up on MasterChef (one of the film’s many nicely judged topical references) who – saving Janet’s burning vol-au-vents – is both the beneficiary of glass-ceiling-shattering and struggling with expectations in a newly precarious work environment.

Like Ginger’s godfathers Mark One and Mark Two in Potter’s Ginger & Rosa (2012), Martha and Jinny – for all their differences – offer a queer counterpoint to the divisive bitterness between the heterosexual couples. In the film’s most romantic moment, tough Martha confesses her vulnerability, telling Jinny: “I love you more than life itself.” Their brilliantly played arguments not only touch on highly contemporary debates around same-sex marriage, the gender binary and emotional labour, but also call to mind – as their names suggest – Edward Albee’s Who’s Afraid of Virginia Woolf? 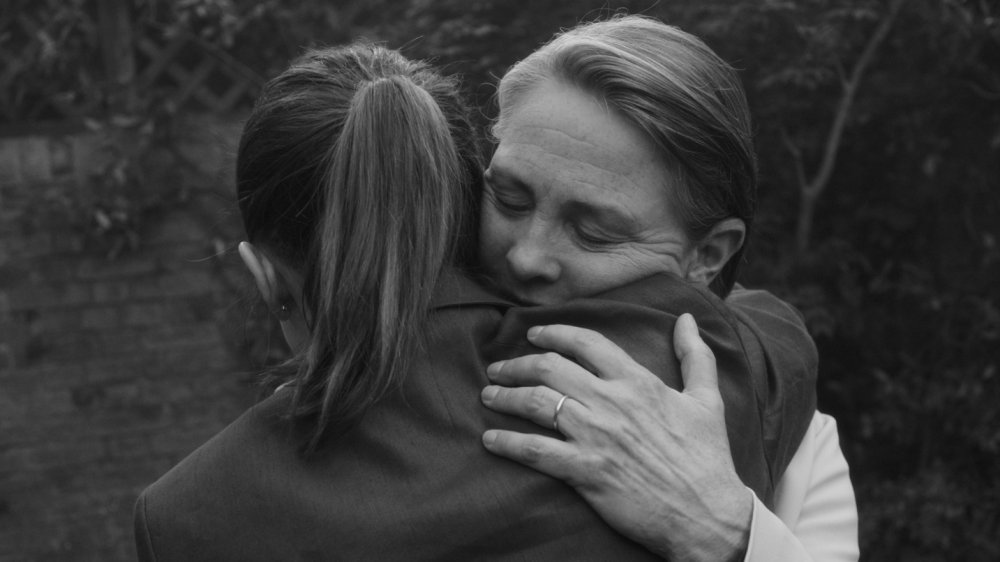 The Party taps into cinema’s long and complex relationship with theatre with levity and dexterity, as we see not only in the reference to Albee’s 1962 play (and Mike Nichols’s 1966 film) but also in Marianne’s turn as Godot. The film’s title tips its hat to Mike Leigh’s Abigail’s Party and the Play for Today TV dramas that transferred the energy of live theatre to the living room in the 1970s and early 80s. Like Alain Resnais in his Alan Ayckbourn adaptations, Potter finds an insistently cinematic language for and through the energy of farce, risking fisheye shots that satirise the deep seriousness with which the characters treat themselves. Beneath all the verbal brilliance are constant reminders of the chaotic nature of the body as it upsets logic and rationality, seen particularly in Murphy’s wired performance as Tom and Mortimer’s portrayal of the pregnant Jinny.

The effervescence of the performances is captured by director of photography Alexey Rodionov’s trademark combination of classical compositions, which here locate the actors’ bodies within the space of the house, and the gliding handheld shots developed for Potter’s Yes (2004). Getting close to the characters as they move with a choreographed frenzy that blends the slapstick and the balletic, these shots generate a sense of the risk of live performing, and we remember that Potter herself has a background in performance, one of her projects being a 1980s avant-jazz group with Lindsay Cooper named The Marx Brothers – making evident even then her love of farce.

Complementing its verbal wit and pointed use of slapstick, The Party is also a musical comedy, cueing us to listen with its opening track, a note-bending reworking of Hubert Parry’s score for Jerusalem, co-arranged by Potter and frequent collaborator Fred Frith. The film’s subsequent soundtrack, almost entirely diegetic, is DJ’d from Bill’s record collection. A classical historian who wrote a book on the Roman Empire called Reason, Roads and Religion, Bill exhibits an appropriative taste for music that advertises his past hipness. The needle drop for the opening track, Bo Diddley’s I’m a Man, is shot in fisheye, with Bill’s face looming into the lens; while the track’s assertion of masculinity is playfully parodied by the assortedly hopeless men in the film, it is Bill’s whiteness that is most visible here, not least due to the crisp black-and-white photography. 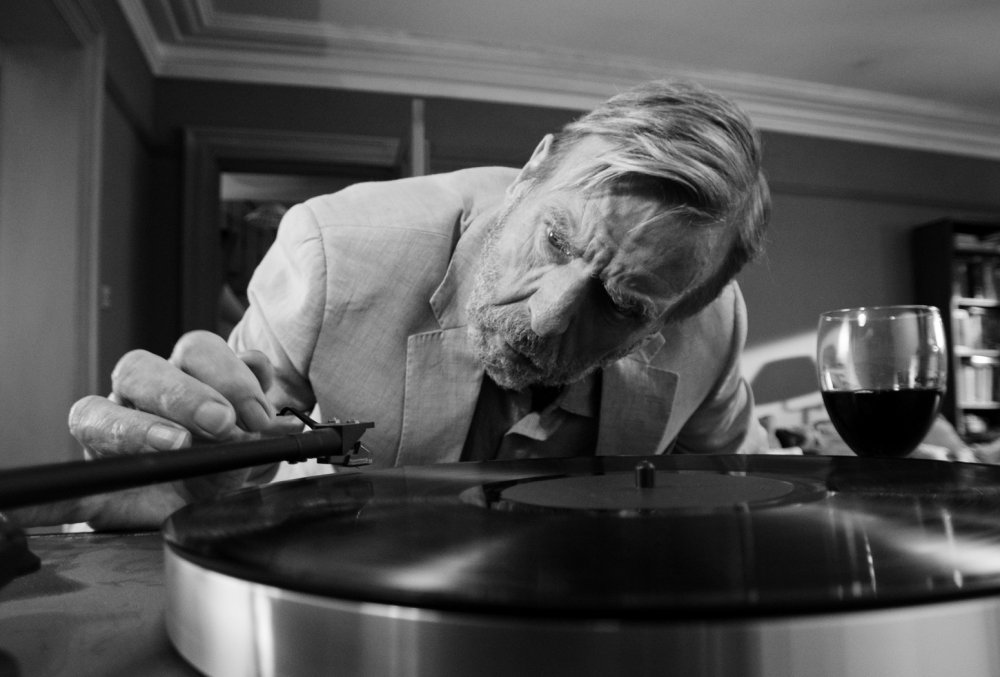 Bill follows Diddley with Sidney Bechet performing Cole Porter, Rubén González, Albert Ayler singing Summertime, Ibrahim Ferrer, John Coltrane and Ernest Ranglin – a cornucopia of iconic African-American, Latin American and Caribbean sounds. The personal and political thus entwine brilliantly on the soundtrack, calling in that which is missing from the whirl: the great swathe of history, of civil rights and anti-racist and postcolonial struggles; that which was once central to the left’s project and has been lost.

After the front door opens a second time, and we understand why Janet is wild of hair and eye, having almost quit her new job even before taking it up – and now questioning its value and that of her steady life’s work giving speeches across the world about truth and reconciliation – the film cuts to black and one final track plays: legendary tango arranger Osvaldo Pugliese (also included on the soundtrack to Potter’s 1997 film The Tango Lesson) performing Alfredo Bevilacqua’s Emancipación, written to mark the centenary of the Republic of Chile. That is the promise symbolised by Marianne, historically the goddess of liberty, who has romanced (and/or betrayed) every character in the film.

The final, dashing track suggests that the parties of the European left need to listen more closely to the music of postcolonial emancipation, to liberate themselves from – taking the titles of the colossal tomes so prominent on Janet and Bill’s mantelpiece – The Legacy of Rome, Man and Society and The West. Through the twists and turns of its intimate revelations, The Party offers a delicious banquet of food for thought about how to be truly free.

Related to Film of the week: The Party skewers politics in black and white