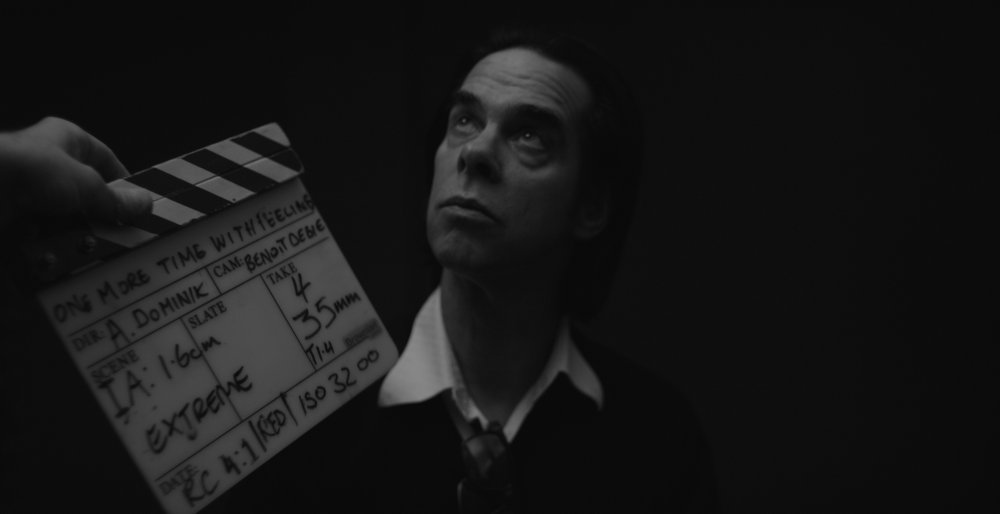 One might think this a risky title for a documentary about Nick Cave that follows so hard on the heels of 2014’s 20,000 Days on Earth, but what happened to this epitome of a myth-making rock star since then is something so awful as to make time – as Cave says here – elastic, like an elastic band that keeps pulling you back to the same thing: the tragic death of his and his wife Suzy’s 15-year-old son Arthur.

There might also seem to be something jarring about a person in such a condition agreeing to record a music-album film (shot by Benoît Debie and Alwin H. Küchler in 3D monochrome, and directed by Andrew Dominik), were it not for the fact that the film turns out to be also an extremely honest and bitterly poignant portrait of grief, and a glimpse of how you continue after one of the very worst things that can happen happens to you. This is a film that’s very alive to its own grim contradictions, with Cave and Dominik often palpably embarrassed and/or nettled by the intrusiveness of what they’re trying to record.

So let me go gently into this film, beginning with the more trivial matter of 3D. It might seem obvious that 3D glasses make you feel more isolated from the cinema audience around you. Regular use of 3D seems to be diminishing again, and the format has not lost its reputation for being a gimmick. So one wonders why Dominik would use 3D for a music documentary about an artist half lost to grief, one who is clearly changed by the “trauma” (the word Cave consistently uses for what happened)? Surely 3D by its nature could not be more intrusive?

Well, maybe not. For me, not to have to feel so sharply that I was sharing the Cave family’s private/public grief with other strangers was a boon. In this way, 3D-glasses become like shades at a funeral, there to shield one a little from something so fierce.

The 3D work itself, under Dominik’s sensitively negotiated guidance, is all about prowling the studio like a cat looking for the eye of the emotional storm. The camera mostly collects Cave’s thoughts and some astonishing performance footage of numbers from his new album Skeleton Tree, a work on this evidence wilder and more given over to unexpected structures which favour the mysteries of beautiful mood, groove and texture.

It’s clear that Cave agreed to make this film in the spirit of his work being what’s keeping him (and Suzy, with her designs) going. Though, understandably, he says he feels he’s diminishing as a person and a talent, I think this album may belie that idea. For myself, as a lapsing Cave fan, I had thought that 20,000 Days had drawn a convenient line; that I was satiated with his work and wouldn’t need to hear much more from him. This film destroys that thought, not simply because it records such a raw insistence on pain expressed against the false promises of narrative (Cave rails against the very idea of story from the start), but also because it leaves the Caves so naked and lost emotionally that, despite all the characteristic parade of rock’s mythomanic pomp (and even pomposity), you’d be a monster not to empathise.

Related to One More Time with Feeling – first-look review