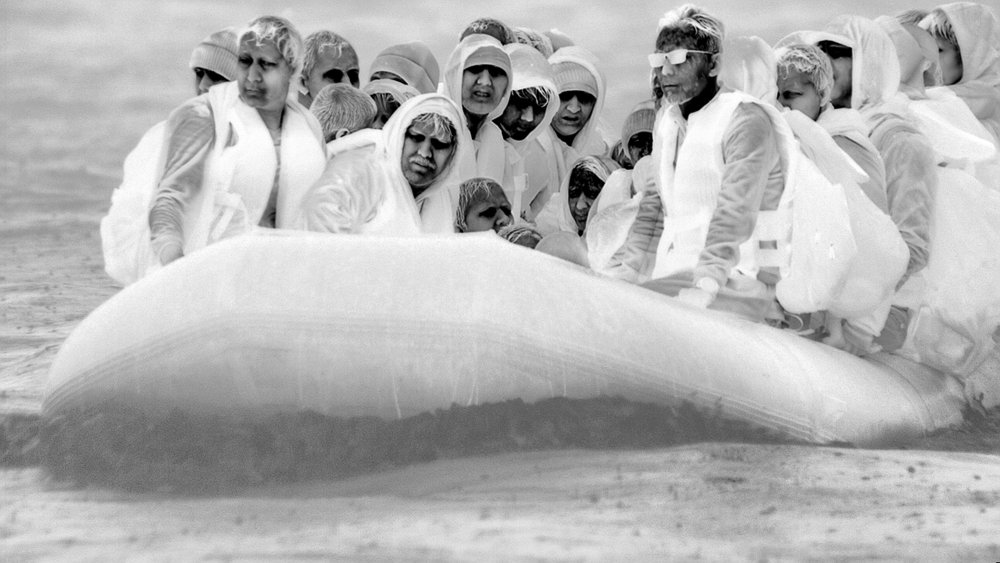 How many times can the world be made new? When does reality get presented to you in a way that makes you feel like you did when you were a child?

Incoming screens at the Curve Gallery, Barbican, London until 23 April 2017.

Advances in photographic technology and changes in art practice have made such occasions more likely but I don’t think I’ve ever been quite so amazed or moved as I was when I visited Richard Mosse’s installation Incoming at the free Curve gallery space in the Barbican.

The all-important centrepiece is a three-screen film installation. It consists of footage shot in such news-focal locations as Ayvacık on the coast of Turkey, the Greek island of Lesbos, a US aircraft carrier, the camps in Calais and even a Syrian city. But what makes the images so potent is not just their uprooted, dispossessed subjects, who are of the kind that inhabit tragic daily news broadcasts, but the technology used to capture these images and how it makes us look anew and more carefully at these people who are often victims of their own national states. 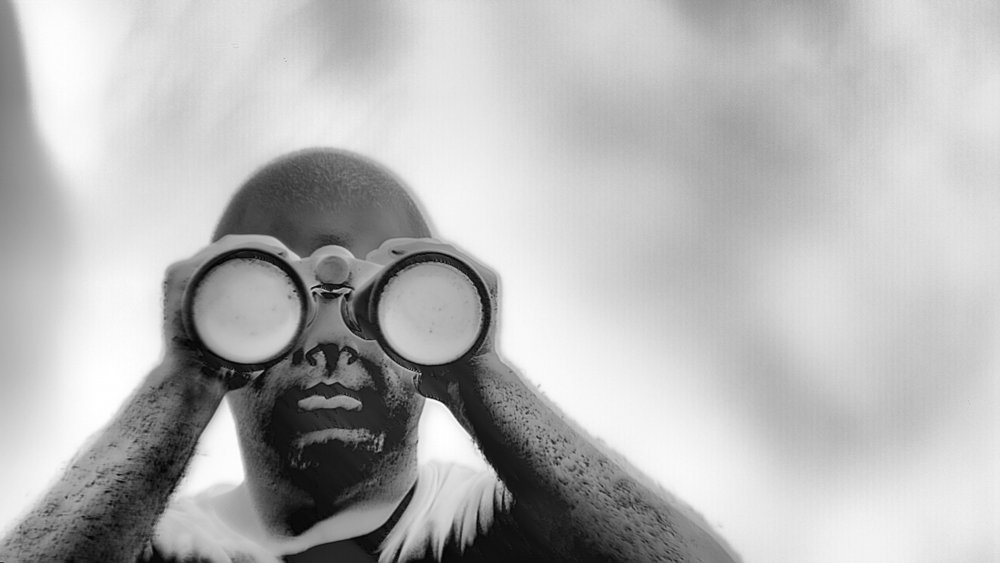 The sequences were shot using a military-grade thermal imaging camera that Mosse acquired after a recommendation from wildlife cinematographer Sophie Darlington. The stills here will give you some idea but this is one effect that is best brought out by the moving image in slo-motion. The phrase ‘thermal imaging’ might lead you to think you’ve seen this kind of thing before, in documentaries about how today’s ultra-sophisticated military weapons find human targets, but the very detailed images here are much more sophisticated than, for instance, what infrared night-vision goggles pick up, or what I’ve seen that helicopter gunners look through (though by now I suspect it is the same). Mosse’s camera can zoom in from many kilometers away – the shots are said to have been taken at a range of between five and 15 kilometres.

This means that the people we’re looking at have no idea they’re being photographed. One might see this as an invasion of privacy, and in a way it is, but because of the nature of the images, there is little or no possibility of gallery visitors identifying who individuals are. You might also be put off by where the technology comes from, but in that case you should throw away all your gadets, since so many IT advances have come initially from military spending. 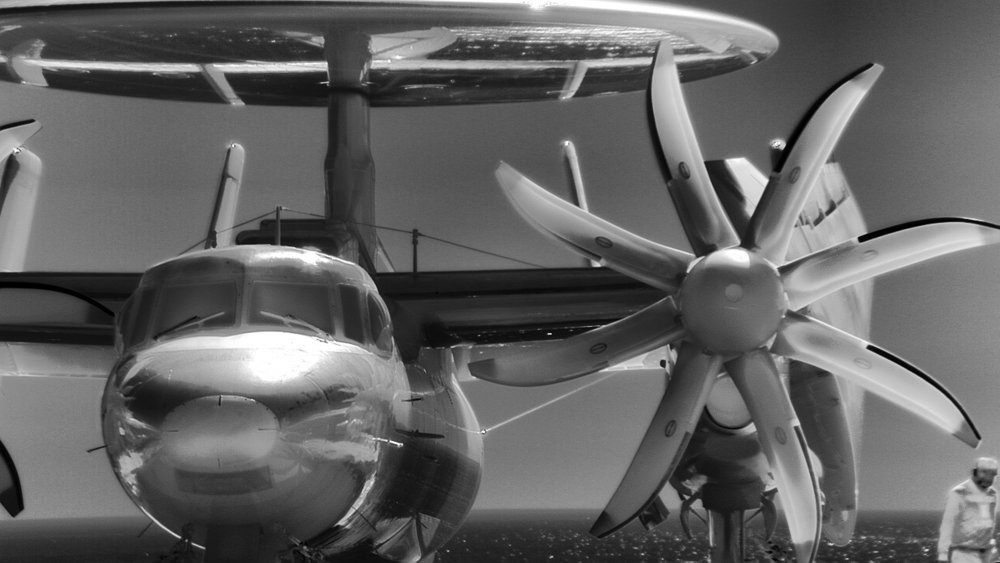 Mapping heat on human bodies the way this camera does has the salutary effect of making skin colour almost irrelevant (though when you get used to it you can, after a while, distinguish Africans from Europeans). I want to focus, though, on one sequence of one desperate man who I think is in a camp (I’m tempted to call it a ‘pop-up’ camp) with a large articulated lorry behind him. He is standing upright as people walk by him, then he falls to his knees to bow and pray and at one point splashes his face with water – which must be warm since it comes out white in the film. His combined desolation and sense of hope is extremely poignant and the alienation effect of watching the water distribute itself and cool on his flesh jars the imagination in just the right way to make you think harder about the kind of life he’s leading and why.

Mosse is keen to connect his images with the ideas of the Italian philosopher Giorgio Agamben, especially those formulated in his book Homo Sacer, where the essence of his argument is – to greatly simplify –  that over time and incrementally the citizen of the nation state, with what Anthony Downey describes as “its over-arching emphasis on birthright, nation-building and the biological determination of the subject”, has usurped the natural rights that accrue to humans as the natural bearers of life. So, to put it crudely, to be a stateless transient person is to be outside and subsumed by the accepted political sense of what a human being should be. Thermal imaging, of course, eliminates such distinctions because what’s warm and precious and alive here is the human body so marked in contrast with the less vivid paraphernalia around it. Though a black moon or a laser-bright jet stream brings you up short, it’s the people – in helmets or wrapped in space blankets, or loaded on the back of an African truck – that make you gasp. 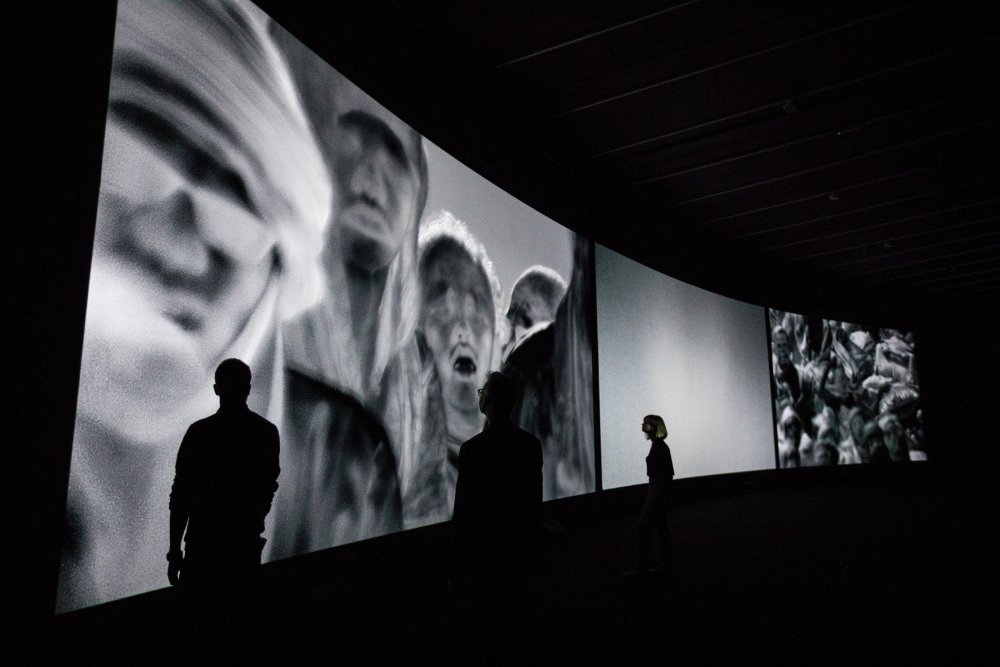 NB. I advise visitors to try to stand near to the centre and at the back opposite the curve near the curtains so that you can take in all three screens at the same time.