Film of the week: No Home Movie

The late Chantal Akerman’s final testimonial to her mother, her wellspring. 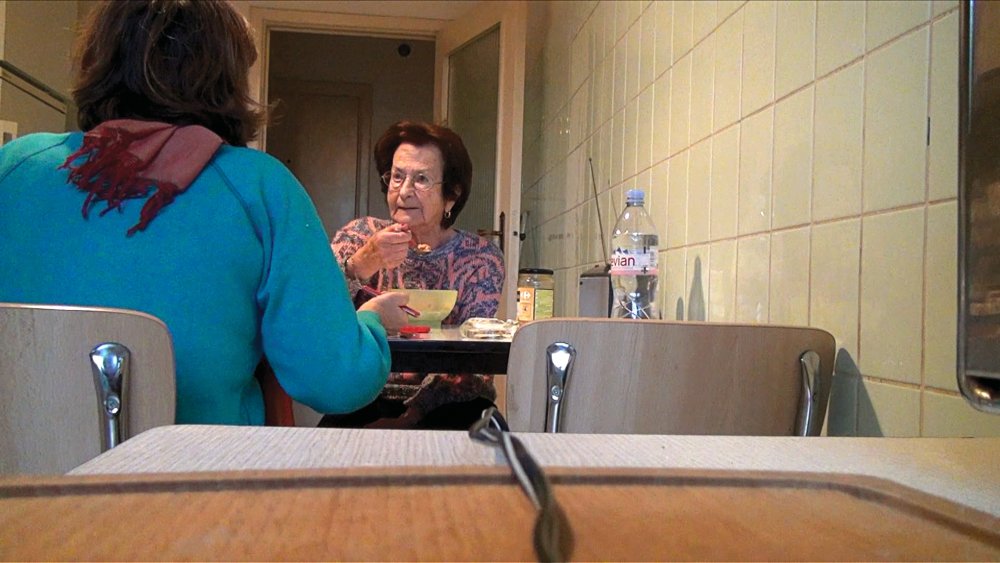 No Home Movie, Chantal Akerman’s final film, is both a veering departure from the trajectory of her recent work and completely of a piece with what had come before. Where her last feature, Almayer’s Folly (2011), was a comparatively lavish period adaptation of Joseph Conrad’s first novel, No Home Movie is a one-woman-band production, largely made up of semi-surreptitiously filmed vignettes that Akerman ‘composed’ by setting down a digital camera on whatever flat surface was available in one corner or another of her mother’s Brussels flat – one shot prominently features the power cord in the foreground – and letting it record.

The mother, who died in 2014 at the age of 86, is Natalia ‘Nelly’ Akerman, usually referred to simply as ‘Maman’. It is no exaggeration to say that Akerman’s relationship with Maman, a Polish-born survivor of Auschwitz, was one of the through-lines of her work. Maman is the correspondent whose epistolary enquiries narrate News from Home (1976); and Akerman has called her nearly three-and-a-half-hour domestic opus Jeanne Dielman 23, quai du Commerce, 1080 Bruxelles (1975), the feature that catapulted her into festival-circuit celebrity at the age of 25, “a love-film for my mother”. (When, at the kitchen table, mother and daughter discuss the relative merits of potatoes served with and without skins in No Home Movie, you can almost see the potato peeler in Delphine Seyrig’s dishpan hands.) Writing about Akerman’s mid-70s output, Brenda Longfellow noted: “Desire in these films circulates around the maternal body, around the variable presence and absence of the mother, around the enduring gaze of the daughter at the mother.”

No Home Movie concludes with the final and irrevocable absence of Maman, and is throughout intimately concerned with the movements of women within circumscribed domestic spaces. In other words, it shows Akerman’s particular set of preoccupations and obsessions very much intact, but finds her adopting new modes and forms in order to explore them. It appears casual, off-the-cuff, something cobbled together from little digital keepsakes, though the 20:1 shooting ratio that Akerman talked about in an interview before the movie’s premiere at last year’s Locarno film festival betrays the exhaustive process through which it finally achieved its apparently slack shape. I’m put in mind of Pauline Kael’s aside in reviewing Jean Eustache’s The Mother and the Whore (1973): “It took three months of editing to make this film seem unedited.” 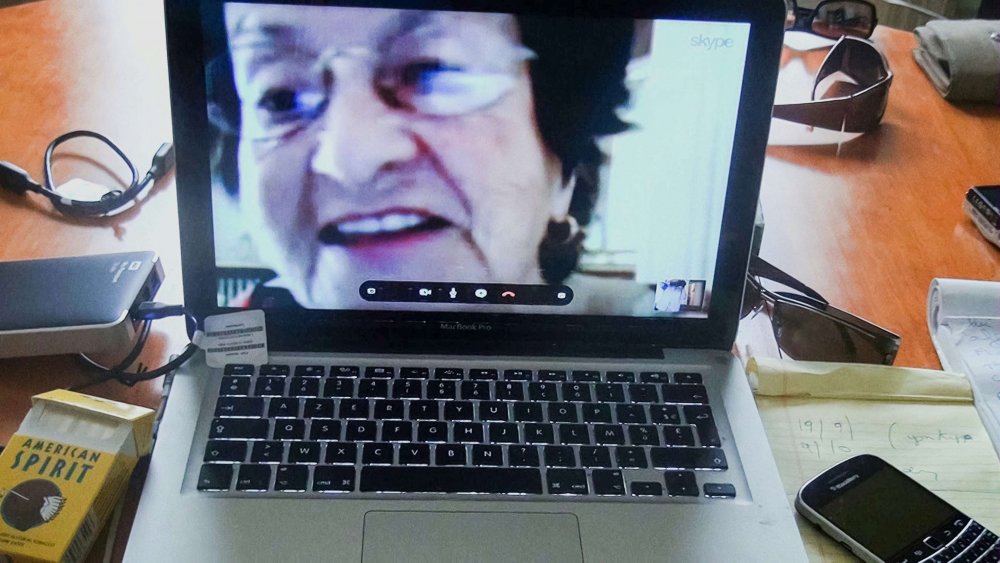 Akerman, an eternally truculent artist who didn’t suffer fools lightly, has put an instructional warning right in the film’s title, which might implicitly be read (This Is) No Home Movie. There’s also a double meaning here, for the interstitial views of desert landscapes in Israel, taken with a BlackBerry camera, evoke the myth of the eternal Wandering Jew – the title might also be taken as Homeless Movie. In the Skype conversations between Akerman and Maman – Akerman announces that she is in Oklahoma or New York, though we don’t see any view more exotic than that of a laptop and a pack of American Spirits in a nondescript room with the blinds pulled down – we get a glimpse into the life of the peripatetic film artist whose touchstones always remain Brussels and Maman. Over lunch, Maman speaks of her own very different uprooting: her flight from Poland to Belgium to escape the Nazis. This was all in vain, for Natalia was sent to Auschwitz, where her family perished, though this is spoken of only in a conversation between Akerman and Maman’s carer, who seems only vaguely aware of the significance of the Holocaust. (Aren’t we all, though?)

No Home Movie distils the essence of an intimate relationship picked up between stopovers, passing over months in a matter of seconds. For approximately two-thirds of the film, Maman appears sharp, lively, healthy, even though she’s still recovering from a recent spill; Akerman chastises her for eating too little, part of the game of playful chiding that goes on between them. Then, seemingly all at once, Maman takes a turn. Visiting, Akerman finds her rattled by a phlegmy cough and growing lethargic; Chantal and younger sister Sylviane take turns trying to draw Maman back into the world, perhaps not realising the severity of the situation. While previous visits all seem to take place in a grey Belgian autumn, which fills the apartment with soft, diffuse light, in the final stretch of the film it is bright and clear outside, and the interior is largely seen in silhouette – which is not to suggest that Akerman bent the weather to suit her mise en scène but that a combination of happenstance, intuition and editing choices creates a total tonal shift in the concluding chapters. 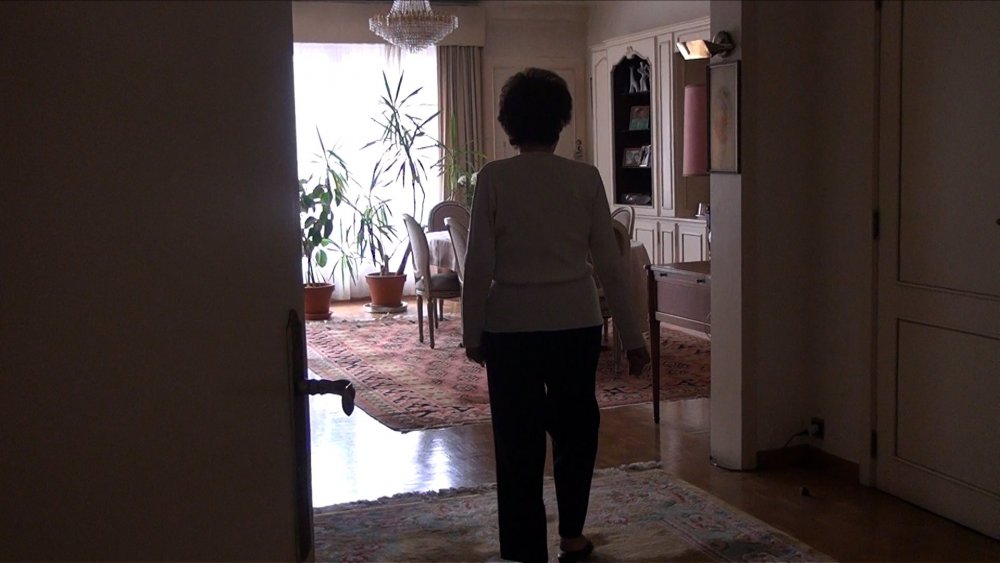 In the Brussels sequences, Akerman alternates between fixed set-ups and handheld work. In the former shots, several of which Akerman appears in, she is always acutely aware of the frame, ceding pride of place to her mother, keeping her own back to the camera. When doing handheld work, she achieves a surreptitious, snooping quality – we never cease entirely to be children in the company of our parents, and Akerman gives a sense of crossing the carpet on tippy-toes so as not to break the silence. Aside from a glimpse of what is presumably a local park, the only exteriors in Brussels are taken looking from Maman’s balcony on to a green lawn below, these shots recurring as a refrain and a sort of counterpoint to the inhospitable desert images.

Akerman acts as her own cinematographer here (as she did on her documentaries From the Other Side in 2002 and Là-bas in 2006), and it’s impossible to imagine achieving the desired level of easy intimacy had there been an interceding presence in the mix. Akerman doesn’t try to erase the presence of the camera, though, making sure to include a moment during one of the Skype chats where Maman seems to hold her tongue because she’s being recorded, protesting, “I don’t want everyone to hear what I want to say to you.”

It’s pure speculation to guess at Akerman’s mindset when editing No Home Movie, but this moment strikes me as the very sort of thing one reproaches oneself for after the death of a parent, moments that can in retrospect seem like failures of communication at what might have been a crucial point, just as some secret that one will never again have access to is on the verge of being revealed. When I saw No Home Movie at its Locarno press screening last summer, my own mother’s death was less than a month behind me, which may go some way to explaining why the film moved me more than it did the tiny handful of superannuated hangers-on who saw fit to boo when the credits rolled. 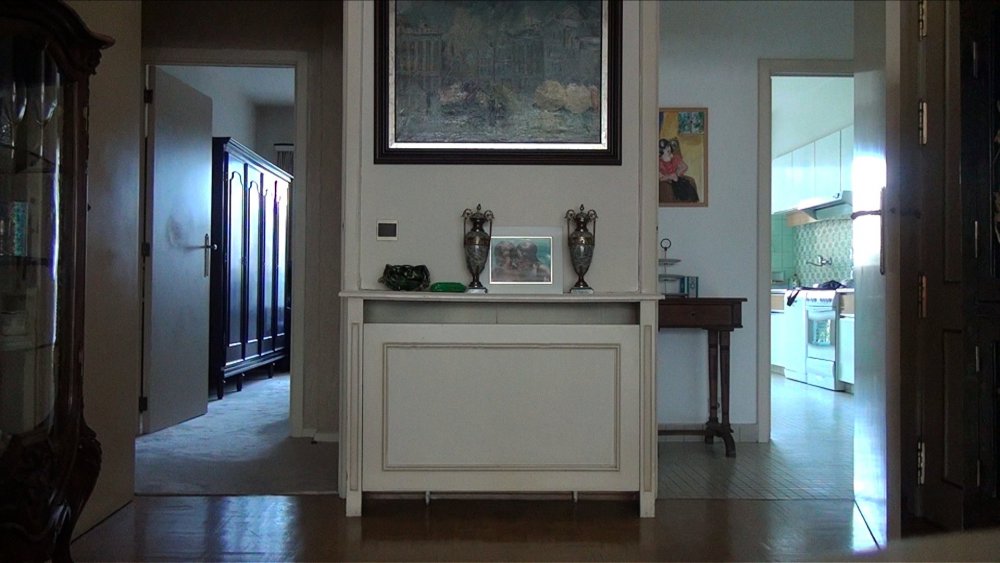 It’s not hard to imagine having a hostile reaction to this piece of work, so convincing is it in giving the impression of being tossed off that anyone not paying attention might overlook its calm control and the deep core of pain that it keeps hidden in plain sight. The film’s mixed reception has been given as an ‘explanation’ for Akerman’s suicide only a couple of months later, though this does a grave disservice to a woman who, for all her confessed difficulties with anxiety and depression – “I’m in a good mood,” she says in one of the Skype chats. “Let’s enjoy it, it’s not that common” – was nothing short of an iron-clad hard-ass when conducting herself as an artist. I’d been due to interview her, but was told she was unhappy with the interviews she’d done that day and would have to reschedule. We agreed a later date – the morning of 5 October.

I wonder if I’d have had the nerve to bring up my own mother. I wonder too what the fate of this queer, fragile, personal film would have been in the cold world had it not had the marketing hook of a tragedy to sell it. Now Akerman is being celebrated and her filmography is decorating tote bags and No Home Movie is getting the distribution it always deserved, though that core of pain is rather more evident now. It’s tempting to look at Akerman’s suicide in the light of Eustache’s, 30-odd years before – the case of completely dedicated personal filmmakers who drew their material from their own lives, and lost contact with their source or, if you prefer, with home. Akerman managed one last trip back – her final loss is our loss, her final victory ours too.

Related to Film of the week: No Home Movie