Film of the week: The Hunt 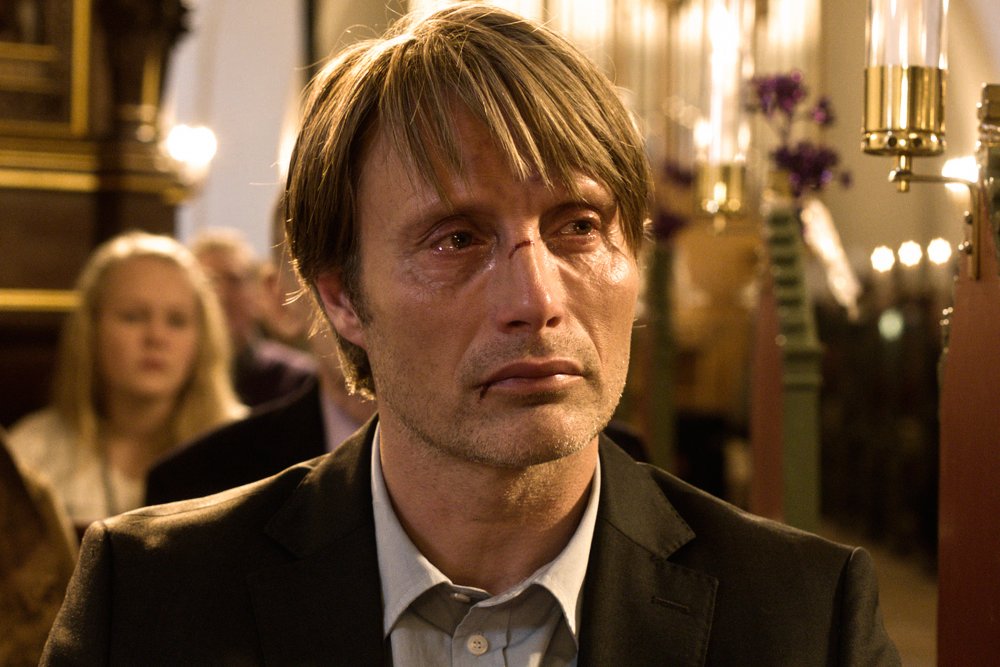 The first point to make about Thomas Vinterberg’s The Hunt is that its main character, who is accused of child abuse, is innocent. This isn’t giving away the ending – Lucas (Mads Mikkelsen) is as falsely accused as Spencer Tracy’s character in Fritz Lang’s Fury (1936). Vinterberg isn’t trying to make a nuanced and ambiguous drama in which the behaviour of the adult towards the kid is open to interpretation. The victim here is the man, not the child.

Scripted by Vinterberg with Tobias Lindholm, The Hunt is bravura filmmaking – lean, intense and very well acted. Even so, the plotting is a little crude: Vinterberg depicts a close-knit rural community in which the adults seemingly can’t accept that a child is telling them lies, and in next to no time they are turning viciously against one of their own. Lucas has no means of defending himself, with former friends ready to shoot or lynch him.

After his international projects It’s All About Love (2003) and Dear Wendy (2004), Vinterberg re-embraced his local roots with the comedy A Man Comes Home (2008) and the drama Submarino (2010). The Hunt is again a pared-down story rooted in family life in a small Danish community. In spite of a blast of Van Morrison’s ‘Moondance’ in the opening scenes (old friends swimming naked in the wilds), the film is made largely without music. And as in Festen (1998), Vinterberg uses handheld camera and natural light.

Thankfully, despite its very dark subject-matter, the film is also leavened with plenty of gallows humour. This approach is summed up in one scene in which Lucas is returning to a friend’s house after his arrest; he embraces his traumatised teenage son, who has stuck by him, and the friend yells out of the window, “Hey! If you fondle your kid, you’ll go back to jail.” This ability to introduce irony at even the film’s most climactic moments ensures that Vinterberg steers clear of the sermonising which often blights issue-based movies.

Although The Hunt may seem like realist drama, the filmmakers also borrow from other genres, in particular horror and vigilante-style revenge thrillers. It’s easy to be reminded of old Frankenstein movies in which pitchfork-wielding peasants chase the monster through forests, or even Sam Peckinpah’s Straw Dogs (1971), with its scenes of a mild-mannered academic caught up in a primal life-or-death battle against psychopathic Cornish villagers.

The casting is astute. Mikkelsen – the Bond villain crying blood in Casino Royale, the Viking warrior in Valhalla Rising and the doctor engaged in an illicit relationship with a queen in A Royal Affair – customarily plays the alpha-male type. Here he’s a kindergarten teacher, a divorcee with a messy private life and low self-esteem – but at the same time, as played by Mikkelsen, he retains a sense of defiance and even a certain swagger. We root for him when he takes violent retribution against a supermarket worker who has been persecuting him, or when he stumbles into church for the Christmas Eve service. He has no doubts about his own innocence. Nor, however battered or isolated he is, does he fall prey to self-pity. 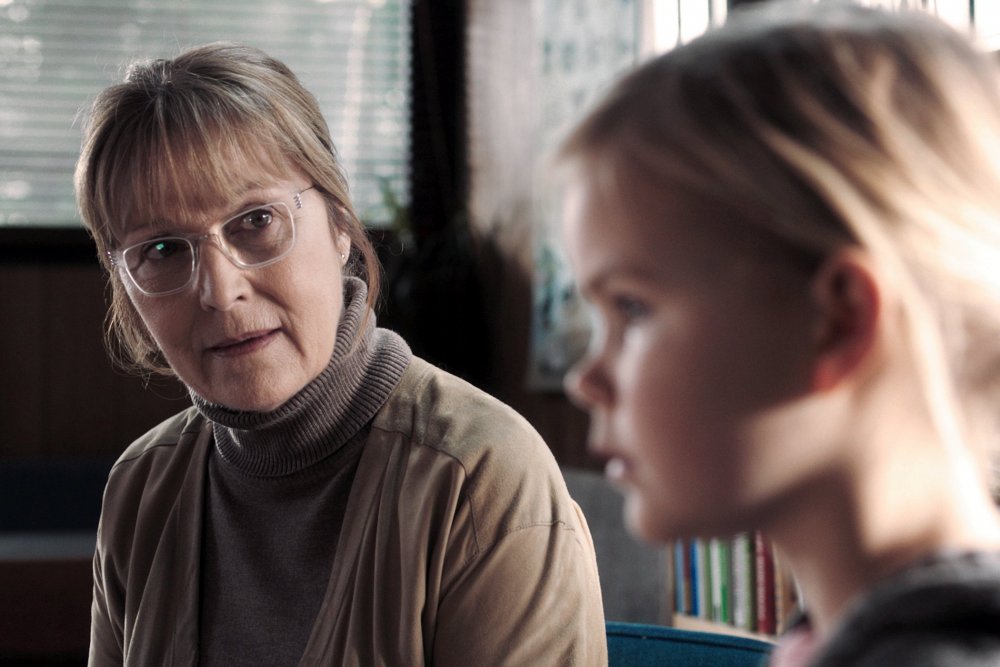 The film continually highlights how easily the seemingly civilised, rational inhabitants of the small town lose their moral bearings – and how irrational their behaviour is. They look and behave like social-democratic types, convinced of their own reason and common sense – but it takes very little to turn them into vigilantes. Almost as disturbing as the ease with which they use violence is the way they snap back into their old bourgeois habits afterwards. There’s a wonderful moment when a character is headbutted; immediately after committing this act of violence, the aggressor punctiliously counts out the money to pay for his groceries. Scenes of domesticity are deliberately juxtaposed with far more primal and disturbing imagery – the very title of the film hints at an underlying savagery. And even before Lucas is accused of abuse, we see male bonding rituals (the naked swimming, the drinking, the hunting) that seem to belong to an older, more primitive world.

In interviews, Vinterberg has claimed (seemingly only partially tongue-in-cheek) that the film reflects a crisis in Scandinavian masculinity. There is certainly a gulf between the Lucas we see off duty, carousing with friends or hunting, and the browbeaten kindergarten worker helping the children in their toilet duties and being scolded by the headteacher. On one warped level, the accusations can be seen as benefiting him, since they give him an excuse to fight back. In his defiance, he reclaims his identity and becomes ever more macho, confronting his tormentors in the church and demanding that they look in his eyes (the inference is that they will find no guilt there). In these scenes, Mikkelsen is playing the part in the same fatalistic way that he tackled the role of the warrior in Valhalla Rising.

The Hunt will inevitably be seen as a companion piece – or riposte – to the equally focused Festen (1998). In that film, a family patriarch is exposed as having sexually abused his children, and the drama hinges on his misbehaviour, for so long concealed, finally being brought out into the open at a family celebration. In The Hunt, the structure is reversed: there is no attempt by the community to conceal the alleged abuse, which is out in the open very early on, and the drama revolves instead around the hero’s attempts to rebut the allegations.

We are told several times that Klara, the child who has accused Lucas, never lies, and the screenplay is deliberately noncommittal about her motives – she has seen a fleeting image of sex on an iPad. She’s no villain and yet her behaviour is perplexing, and so is that of the adults around her, the experts and teachers who believe everything she tells them. Her father Theo (Thomas Bo Larsen) is Lucas’s best friend but doesn’t take very much convincing of his guilt. The ties in the community where Lucas lives seem at first to be extremely strong – the men have grown up together, they drink together, they go hunting together – yet on the basis of just a few words from a young girl, old loyalties are very quickly severed. 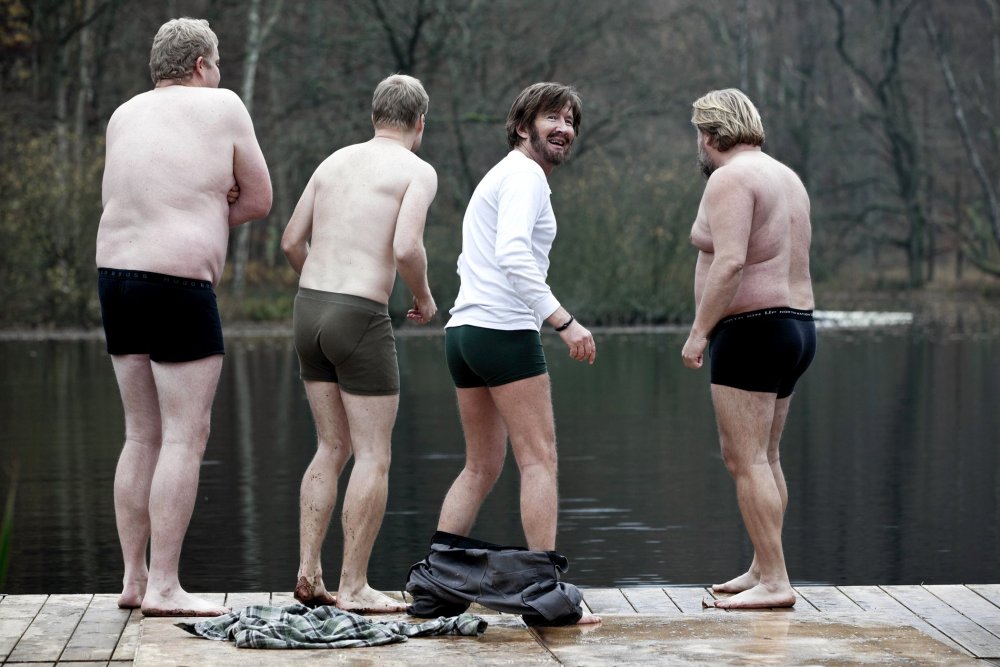 It is one of the paradoxes of recent Danish cinema that so many directors who made their names in the Dogme period in the late 1990s have turned out to have such mainstream sensibilities. Even when he was working under Dogme constraints, Vinterberg was the most accessible of directors. With The Hunt, he has taken very dark material and yet the tone, if not exactly breezy, isn’t dour either. The style is disarming – after all, abuse of a child is one of the ultimate taboos – and the subject-matter alone is likely to put off some viewers.

Others may take against Vinterberg’s stance, in particular his insistence that the child isn’t always innocent. The man falsely charged with child abuse is the modern equivalent of those wrongly accused witches in films and dramas such as The Crucible or Day of Wrath. The difference is that he fights back – and he has a sense of humour about his plight. Vinterberg tells Lucas’s story with intensity and grim irony, and even throws in his trademark references to Bergman’s Fanny and Alexander. The result is a film that, in spite of its ambivalent coda, is far more uplifting than you would ever expect.