Film of the week: Compliance

A prank call to a fast-food restaurant plumbs sado-masochist depths in this drawn-from-true-life thriller.

“What did they put in that chicken that made everybody lose their fucking minds?” is the dry query of one of the real police officers who finally arrive at the close of Craig Zobel’s troubling psychological thriller, which draws on real events triggered by hoax calls made to fast-food joints across America over a recent decade.

Audience members may respond similarly. As can so often be the case, real life here supplies extremes of human behaviour that might well be thrown out of a fiction-film script meeting for lacking credibility. No one would be dumbly obedient enough to follow bizarre orders from an unknown caller just because he called himself a police officer. No victim would passively submit to such an unseen authority. And neither patsy nor victim, surely, would allow the process to become seriously physically and sexually abusive.

Except that they did, numerous times, and with variably prolonged and extreme consequences. One of the most extreme cases, at a McDonald’s in Mount Washington, Kentucky, in 2004, resulted in two arrests as well as a suit against the chain, and provides much of the basis for Zobel’s script. (The film, however, offers the comforting inference that the caller we see on screen will be brought to justice; the man tried for the Mount Washington incident got off, despite substantial evidence of his guilt. He remains a suspect in similar cases.)

Zobel’s film and the events that inspired it draw to mind psychological experiments such as Dr Stanley Milgram’s 1961 electric-shock test and Philip Zimbardo’s 1971 Stanford prison experiment. The extreme results of both studies provide oft-cited evidence of hardwired negative traits in human beings: slavish collusion with authority in the former case; readily provoked sadism in the latter; swift jettisoning of compassion and moral responsibility in both.

But Compliance resists simply wallowing in our collective vileness, and mercifully avoids that pat movie cliché of implying audience complicity in voyeurism and abuse (unlike Oliver Hirschbiegel’s 2001 take on the Stanford debacle, Das Experiment, and its 2010 Hollywood remake). Through nuanced performances and a thoughtful script, Zobel asks us to recognise subtle reasons for each character to behave the way he or she does, and demands that we acknowledge the ambiguous responsibility for what is effectively a rape by proxy.

In cases of crimes committed by two or more people, juries are often asked to take into account the ability of one individual to manipulate others. What responsibility did Charles Manson’s ‘Family’ of acolytes bear for their individual participation in the crimes into which he pushed them? More than him? Less? The same? Was Myra Hindley less guilty of torture, rape and murder on the basis that she adored Ian Brady and was within his control? The stunts performed by stage and television tricksters of the Derren Brown stripe make entertainment out of the same worrying questions: suggestion, manipulation and hypnosis are used to convince ordinary people to attempt robberies and assassinations. 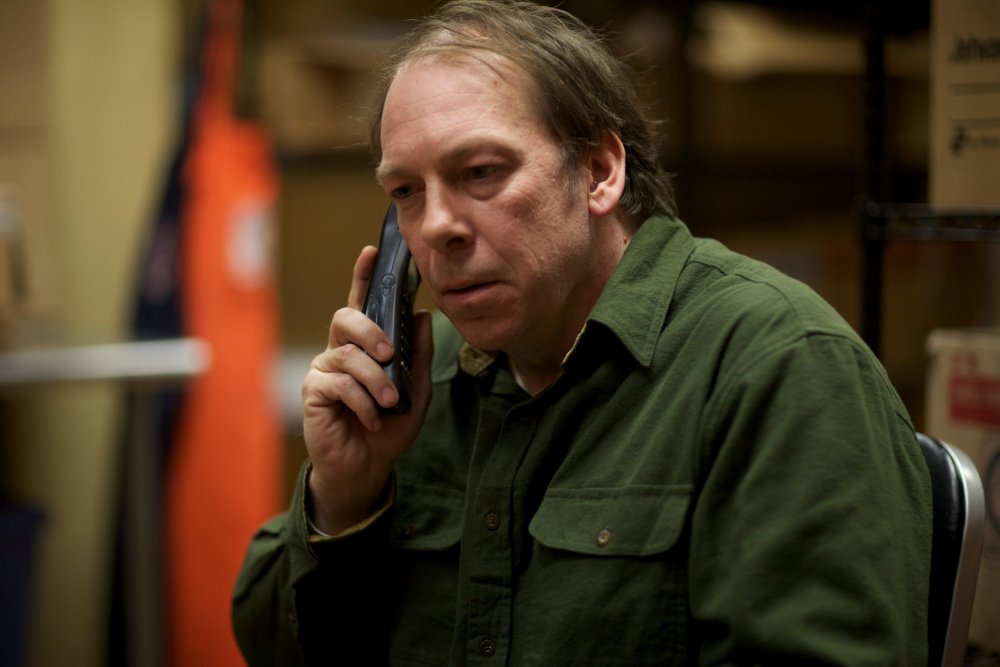 The caller in Compliance relies on his ability to talk people round by using a combination of deception, flattery and intimidation. We first glimpse him shouting into a payphone, presumably concluding his previous project. He then heads home and tries his routine on the staff of an Ohio ChickWich restaurant: asks for the manager; claims to be a police officer and to have her superior “on the other line”; then offers a vague physical description of a young female employee, to which she generously affixes a name. He tells Sandra (Ann Dowd) that 19-year-old Becky (Dreama Walker) is suspected of stealing money from a customer, and must be searched: first a scan of her belongings, then a strip-search.

Initially, the caller gets lucky, on his terms. Sandra, though hesitant, is already ratty because of an expensive employee mistake; we see that she’s a bit of a jobsworth, a bit fond of martyrdom, and resentful of the perky, popular Becky, whom she’s overheard mocking her frumpiness. The hoaxer’s officious tone, and his dark hints of an important case in which she could play a key part, appeal to Sandra’s vanity; he’s offering her drama, sympathy, and a chance to get one up on Becky even as she gestures towards being responsible. (“Corporate always wants two people for a strip-search,” she vapidly asserts.)

It only takes Sandra being convinced for her staff to fall in, to varying degrees: she’s the boss, and they all fear trouble with the cops. Vague suspicions that all might not be well are beaten back. But even the hoaxer cannot predict the moral flexibility of strangers – and part of his enjoyment seems to derive from that unpredictability.

He finds an unexpectedly accommodating accomplice in Van, Sandra’s fiancé, who’s summoned to help when Sandra and the caller run out of willing employees to ‘guard’ Becky while the police are unaccountably delayed. Van, a little drunk, starts out baffled and suspicious, but soon grabs his chance to abuse Becky. Unlike Sandra, he knows he’s doing wrong, but proceeds anyway. Told to spank Becky, he asks the caller if he should place the phone on her back so he can hear; the caller reacts with covert startled glee.

Whether Van believes that the caller is a cop is left open. So too is whether the caller’s main kick is sexual or related primarily to how far he can make these individuals go. Clearly his undertaking involves an element of class-based exploitation: the film makes a point of showing us that he is more affluent than the average employee of ChickWich.

But it also makes a symbol of the unwholesome lowest-common-denominator bilge pumped into American bellies by the junk-food industry, and the phoney can-I-help-you cheer with which it’s purveyed. Can a society that voluntarily feeds itself like this have discernment in other matters? Zobel is generally respectful in his depiction of Becky’s ordeal, but he does allow himself a darkly dirty joke when Van pushes the girl into oral sex: the camera cuts away to an unclean, dripping drinking straw.

Another bitter laugh, another incredulous thrill for the hoaxer, comes when he asks Van to describe the girl’s pubic hair. Van notes that it’s “trimmed”, whereupon Becky, even as she bends naked to be inspected, feels the need to correct that “it’s shaved – it’s just been a couple days”. It’s a mean joke, but it says something about the generation of girls of which Becky is part: beset by boyfriends demanding explicit phone pictures, preoccupied with physical perfection.

To Becky, crucially – and to her work colleagues, who suspect foul play but don’t intervene – believing that the caller is a real cop doesn’t contradict the knowledge that he’s perverted and corrupt. She does what he says because he has the power, and the powerful close ranks against girls and fast-food workers. The film portrays her generation as being as unfamiliar with trustworthy authority as it is with female body hair.

Related to Film of the week: Compliance