Film of the week: From Afar 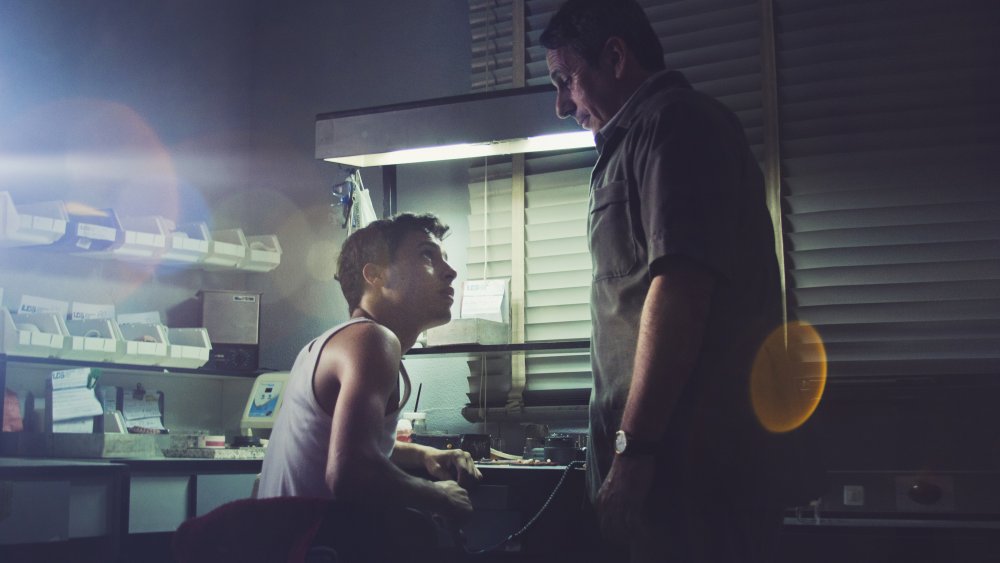 With this quietly stunning first feature, writer/director Lorenzo Vigas became the first Venezuelan to win Venice’s Golden Lion, in 2015. The achievement was far from a freakish anomaly. From Afar is an intelligent, daring, brilliantly constructed and acted film, announcing yet another Latin director who understands the virtue of restraint. His work here also resists easy categorisation: it’s a film involving homosexuality and homophobia that isn’t queer cinema; it offers an authentic view of his troubled country’s capital, Caracas, with a story that could take place anywhere in the world.

Chiefly, it’s about fathers and sons. Vigas’s title may refer specifically to the ‘look but don’t touch’ approach to sexual relations of his older protagonist Armando, but it also speaks of immutable damage, of the long shadows cast by abusive or absent parents over their children.

The opening sequence establishes the film’s precise visual language and, through that, the personality of a determined loner whose alienation and stunted emotions are deep-rooted. As Armando cruises the streets, the camera’s shallow depth of field reflects the city from his perspective, out of focus, as if Caracas is irrelevant save for the young men who will give him gratification.

The reverse angle, past a close-up of a boy’s face, has Armando looming indistinctly in the background, a spectre. He becomes concrete as he makes contact. Following the boy on to a bus, he sits next to him and brusquely, brazenly, pulls a wad of notes out of his pocket. The lack of respect in the transaction continues in Armando’s apartment, where he quietly issues instructions – “take off your shirt,” “pull down your pants” – while he sits, watches and masturbates.

Armando is not a sociopath. He’s capable, responsible, courteous when he needs to be, able to be kind; his apartment is tasteful, full of books and old family photographs – of women, not men. He’s not dangerous. He simply can’t, or won’t, share intimacy. It’s a wonderful touch to make him a dental technician. A dentist would involve too much proximity to people; far better that he works alone with dentures, honing them to perfection – for this man is nothing if not fastidious – without having to deal with their owners. 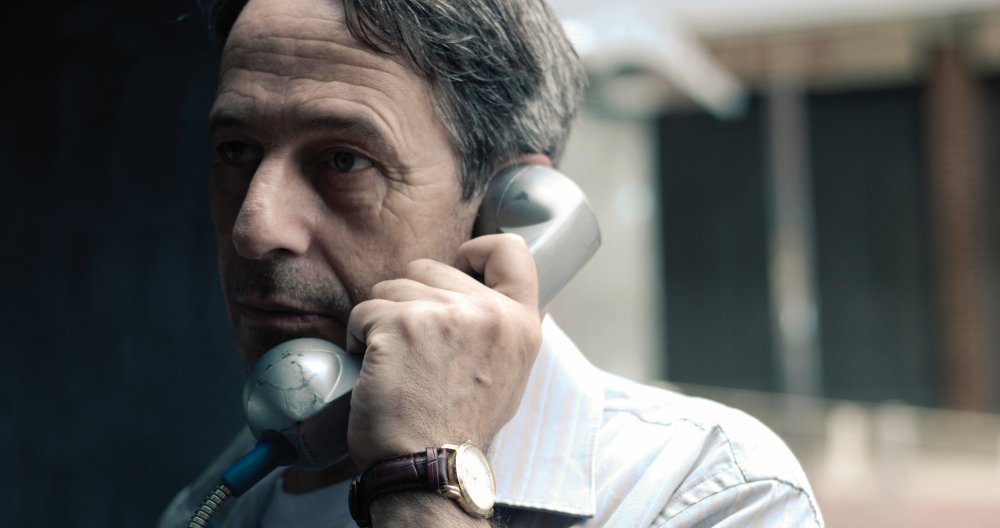 A visit to Armando’s sister gives a glimpse into the root cause of the dysfunction. He is no warmer or more talkative with her than with the boy. He tells her that their father “is back”. She asserts, “It’s normal for us to put it behind us, after so long.” He’ll have nothing of it. “Do you think it’s normal? Did you forget?”

And this is as much as we’ll learn about Armando’s childhood, or about his father’s treatment of him. Like the best Latin screenplays, Vigas’s script (based on a story he devised with the Mexican Guillermo Arriaga) is an object lesson in minimalism, with both dialogue and character motivation cut to the bone. Although we assume that the businessman Armando is following is his father, there is no interaction to confirm it; such ambiguities fuel the tension of the film.

But there is one other valuable piece of information from the two scenes with his sister: she and her partner are adopting a child. Daughters have their own different ways of dealing with trauma.

It takes the surly, animalistic teenager Elder to tempt Armando towards a greater connection. After he bashes him with one of his own figurines, Armando could chalk the attack down to experience. Instead he continues to approach the younger man, money no object and his safety unconsidered. The reason for his persistence is unclear; it is likely Armando does not know himself. Nevertheless, the more frequent their interactions – without the sexual contact that was once Armando’s aim – the greater the bond that develops. 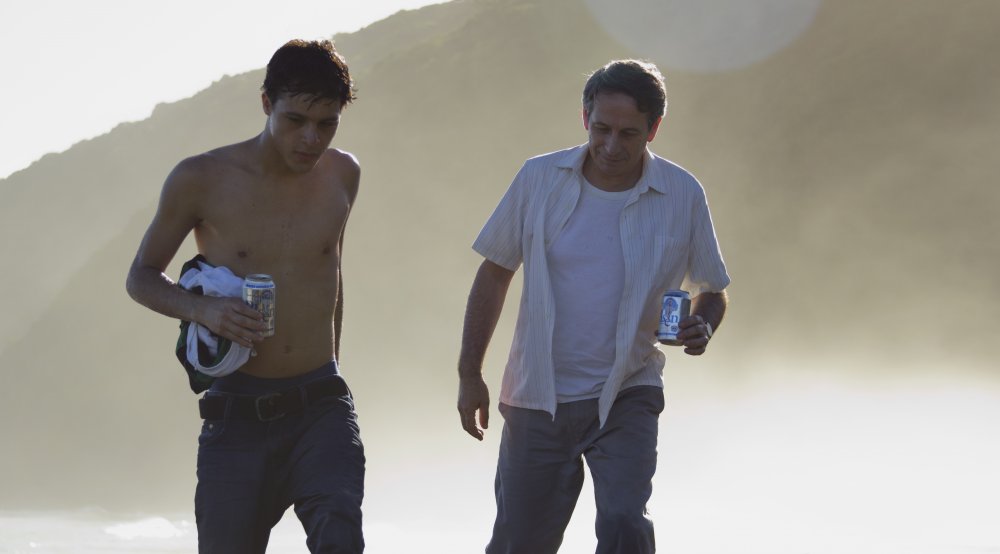 At the outset, Elder is an unappealing individual. With a sullen look that could kill, a propensity towards extreme violence and lamentable table manners, he is not easily excused as a product of the streets. As Vigas divides attention between the two men, the film becomes a study in contrasts – between the middle-aged and young, middle-class and poor, professional and street thug, apparently gay and straight, a loner and someone with a family life, friends, a girlfriend. What they share, the subconscious glue perhaps, is errant, absent fathers. And eventually Armando’s generosity – whether caring for Elder after he is injured or buying a car for him – has a profound effect on a youngster who has experienced nothing like it before.

Elder’s response, the change in his character, is the most significant development in the film; whereas we might have expected him to treat Armando as a father figure, he goes further, not only responding to the older man’s sexual gaze but upping the stakes considerably. Whether Elder is innately homosexual or driven by uncharted feelings of gratitude is another intriguing question left to us to answer; either way, it’s ironic that having been moved to such an acute transformation, he’s hung out to dry. By the end of the film a very effective performance from newcomer Luis Silva has invested the boy with considerable pathos.

It is largely through Elder that Vigas and his cinematographer Sergio Armstrong expand their visual range, by literally bringing more of the background action into focus when the boy is in the frame, introducing the bustling streets and markets, pool rooms, bars and massive housing projects. If narrowing the depth of field reveals Armando’s state of isolation, so increasing it, in widescreen compositions teeming with life, reveals the day-to-day world and human interaction that he is resisting. 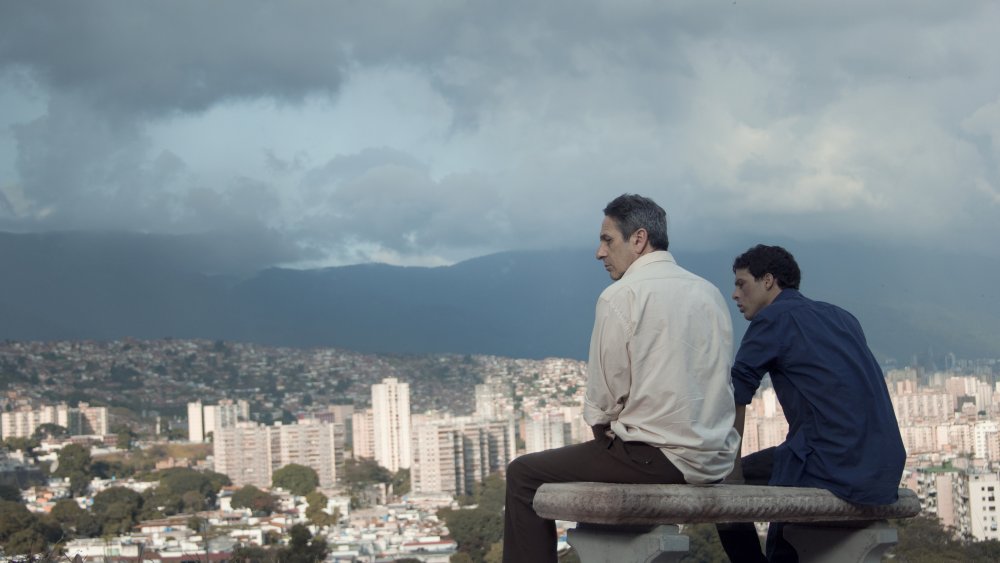 On the rare occasions when Armando does try to relate, he doesn’t fit. Accompanying Elder to a birthday party – a vibrant working-class affair – the poor man is hilariously incongruous. “Dentures, madam,” he says, announcing himself to Elder’s mother. “At your service any time.”

This is a rare moment of levity. Minutes later, Elder makes an attempt to kiss Armando, who rebuffs him, in keeping with his controlling nature – but not before they have been seen. Elder’s immediate ostracism by family and friends brings to mind another recent Venezuelan film, Bad Hair (itself a major winner, at San Sebastian in 2013), both films illustrating the degree of homophobia in a society where even a mother will desert her son.

Vigas came to his first feature after a career in documentaries and one short film. Like many of the breakout Latin American directors of the past 20 years, he has tapped into the network of established talent from the region, including the Mexicans Arriaga and director Michel Franco as producers (From Afar shares some of the slow-burn tension of Franco’s films) and the Venezuelan actor Edgar Ramírez as an executive producer.

But the most significant collaborators are Chilean: Armstrong, who has shot most of Pablo Larraín’s films, and Larraín regular Alfredo Castro as Armando. After his terrifying turns in Tony Manero (2008), Post Mortem (2010) and The Club (2015), Armando represents one of Castro’s most straightforward, even ordinary characters; but the actor’s trademark stillness and near-whispered delivery are as disconcerting as ever. Finely calibrating Armando’s glances, half-hidden smiles and body language, he balances enigma with a palpable sense of a man with a watertight understanding of his comfort zone and a steely intent to preserve himself within it. He typifies a film that packs a heavy punch without seeming to move its hands, which makes for a very particular, and compelling, experience.

Related to Film of the week: From Afar