Alejandro Jodorowsky’s landmark acid western is re-released in a new 4K restoration. On its original release, our critic found it to be an absurd and energetic set of ciphers. 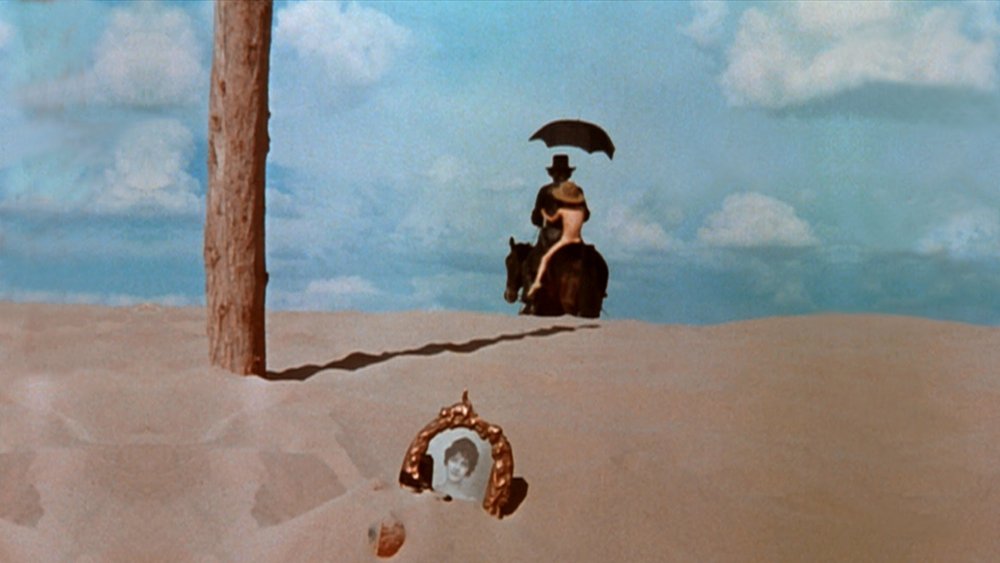 Many a lone horseman has drifted in across the high hot plains since the days of Shane, purged a restless group of townsfolk of their vices and guilts, and dwindled once again into the desert leaving a pile of corpses to be disposed of by the survivors. The staying-power of the western has come to depend upon this hollow-eyed metaphor, an unquestionable moralist whose force of argument relies not on rhetoric but on the entirely dubious moral superiority of the well-aimed bullet. He wins too many battles for his audience to risk not being on his side, and although he has become a little more vulnerable in the last decade his potency as a freedom fighter is undiminished. Billy the Kid lives on.

And so when we see Alejandro Jodorowsky riding purposefully over the dunes in black leather, we need have no doubts about the story that El Topo will tell us: cowardice, corruption, capitalism and complacency, spinning like windmill sails, are in for another onslaught.

The gaunt figure of Jodorowsky, however, carries not a lance but an umbrella, while the diminutive Sancho Panza behind him is a nude seven-year-old clutching a teddy-bear and a framed picture of his mother. It is time, the boy is told, for childish things like toys and mothers to be put away – somewhat ineptly in the sand, as it turns out – and for him to become a man. Father plays a flute for the burial, and they ride off to meet the world, umbrella still hovering bat-like above them. The peculiar fascination of El Topo is defined by the dislocations of this opening scene: the brilliant photography and the simplicity of the action are counterbalanced by the sense of ritual, in which every move, every object, carries a history of meanings.

At the same time the performance has an undercurrent of absurdity, as if each meaning, once analysed, would prove to contain its own contradiction. No child can wholly discard one parent for the other, no rational education neglects the value of playthings, no rider travels naked if there’s a long journey ahead. The film tells us that the mole is a creature which digs through the earth in search of the sun, only to be blinded when it comes to the surface, but this too is a claim based on confusion rather than accuracy. It sounds tragic, its relevance to a philosophy of life is unquestionable, but it just doesn’t happen to be true.

No matter, El Topo sweeps grandly on its way. The child’s first lesson is a vision of hell, a scrubby Mexican street after a massacre, bodies everywhere, disembowelled animals, vast pools of blood from which strange colours of sunlight are reflected, men hanging like sides of meat, and an electronic cacophony of scavengers on the soundtrack (although there’s hardly a fly to be seen). The child learns either pity or pragmatism, take your choice, when handed a pistol to finish off a dying man, and is then carted off to learn the lesson of vengeance as his father tracks down the bandits responsible and kills them off.

A merry, clownish bunch, these ruffians, given to raping shoes, lizards, monks and their leader’s girl, given the chance. El Topo removes their leader’s toupee, clothes and manhood, rescues the girl, and abandons his son to the clergy with the inestimable advice that nobody can be trusted. Watching his father depart in the clutches of a mere female, the boy can be seen to have completed his education.

“Who are you to judge me?” the bandit leader asks, confronting his Nemesis. It’s a useful question, but characteristically the reply only complicates matters. El Topo, it seems, considers himself to be God, although in retrospect he may mean he’s a god, or he may mean he’s the Son of God, or he may have made a mistake. To the envy of his girl, he finds water in the desert by shooting the top off a rock, and he finds food by digging up turtles’ eggs; he bestows an orgasm upon her, whereupon she too becomes capable of these homely miracles. As she points out, however, he’s not much of a God as there are at least four other men in the desert faster with a gun than he is.

These four Masters, a splendid quartet of vaguely Taoist eccentrics, have to be defeated by a succession of tricks so dirty that El Topo, supreme, rushes about the sands in an agony of remorse and settles for being the Son of God when stigmata are shot into his hands and feet by a lesbian who then rides off with his girl. The encounters are amazing, replete with lions, lambs and white rabbits; since the Crucifixion has been retold as everything from a musical to a bicycle race, there seems no reason why it shouldn’t be shown as a western, but Jodorowsky obviously likes to work with every kind of myth simultaneously, and his duels with the four Masters are a bewildering round-up of creeds and conceits. Put simply, the first half of El Topo shows a man testing the limits of his physical and moral strength – and finding he has failed himself.

The second half, predictably enough, begins with the resurrection. Now a startling albino reminiscent of Fritz Lang’s blow-wave Siegfried, El Topo regains consciousness underground, where he has been tended for years by a community of cripples. Brought to full awareness by chewing on a ceremonial stag-beetle, he vows to release the pathetic creatures qround him by tunnelling an exit for them through solid rock; but when they at last break into the light the results, of course, are fatal for them.

One would be tempted to ignore the film’s echoing gallery of ciphers and symbols, were they not so much a part of the fun. Jodorowsky, meaningful as Buñuel, meaningless as Fellini, carries his extremes further than either of them into the stormy surrealist regions of the ludicrous; but in an instant he’s back again, playing Beckett, Jarry, Peckinpah. His personification of the auteur theory would be intolerable were he not so energetic, so inventive a director, as willing to parody (the low-angle shot of El Topo bursting through a door) as to imitate (a bandit sucking the toe of an elegant high-heeled shoe).

His own performance is hypnotic, going all the way from shaggy marksman to shaven guru, and he is supported by a remarkable cast of unselfish agonisers.