Vince Gilligan’s feature-length coda to his legendary crime-building series traces a ho hum chance at redemption for Aaron Paul’s rough diamond Jesse Pinkman; but there are passing pleasures for the devoted. 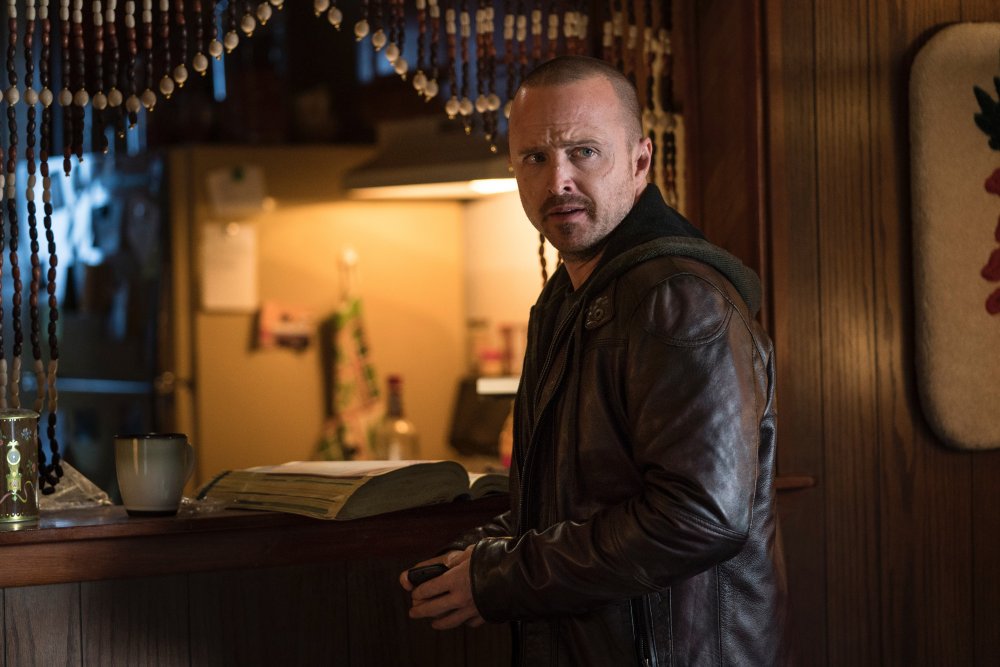 Spoiler alert: this review hints at the shape of the film’s ending.

Despite its awkwardly insistent subtitle A Breaking Bad Movie and a widescreen ratio expanded from the show’s 16:9, El Camino is very much a TV-reunion one-off that brings back fan-favourite characters for another round (alive in the diegetic present, or in flashbacks if dead when the show was over), while allowing for a fairly predictable form of closure.

Over five seasons of Breaking Bad, Aaron Paul’s Jesse Pinkman marched down the hard path reserved for him by fate via creator and showrunner Vince Gilligan. Once an amusingly sloppy, unjustifiably brash high-school dropout looped into a life of lucrative crime via meth-producing teacher Walter White, Jesse took the brunt of the show’s abuse, kidnapped by neo-Nazis and forced to manufacture drugs when not caged. El Camino picks up precisely where the show left him: freshly liberated from their compound by an en-route-to-death White, with zero plan for the future.

As Walter evolved from amiable antihero to Robocop-level unreachable on his path to pure evil, Breaking Bad invited viewers to recalibrate their instinct to empathise with a series lead and repeatedly reconsider if now, finally, White was unredeemable. For the likeable, far more oblivious Jesse, the route to redemption is still perceptible when El Camino starts: his only real dilemma is whether to turn himself in to the authorities or try to get enough money together for a chance to leave town and start a new life.

The film anchors itself in an extended flashback in which Jesse spends time with his most unpredictable tormentor, Todd Alquist (Jesse Plemons), on a ghastly weekend road trip to bury a corpse in the desert. This sequence is emblematic of a strength Gilligan plays to throughout: long sequences of inconsequential banter, funny in their own right while theoretically building tension towards something that’s surely dreadful.

Other than serving as an inadvertent ‘in memoriam’ for Robert Forster (reprising his guest role), who died the day the film was released on Netflix, El Camino will only work for fans who can recall who all these familiar faces are – the nostalgic pull and possibility for reconnection are sometimes recapped in dialogue, most of it avoiding the ludicrously expository, but outsiders will be baffled. That’s as it should be, and Gilligan is adept at spinning his wheels for the purposes of one last number for the fans.

As a meditation on whether Jesse is capable of creating a new life, let alone if that’s the right moral choice to make, El Camino is a non-starter: he was arguably the series’ most endearing punching-bag character, treated ever more harshly than the numerous ones who died, and he finally gets the break fans crave, with total defeat never a plausible possibility. The goal isn’t real introspection but tying off his arc: Jesse stays in motion, running and shooting away from traumatic flashbacks towards a brighter future, with almost no time for externalised reflection, on his way to a less-than-surprising send-off. Maximum poignancy is derived not from his dilemma, but from seeing performers, now over a decade out from the series premiere, who’ve aged beyond the age they’re supposed to appear in flashbacks.