Farewell, King Coal: this year’s Big Meeting will mark the first in an era without working deep-pit mines in Britain. We revisit 1984 and the beginning of the end. 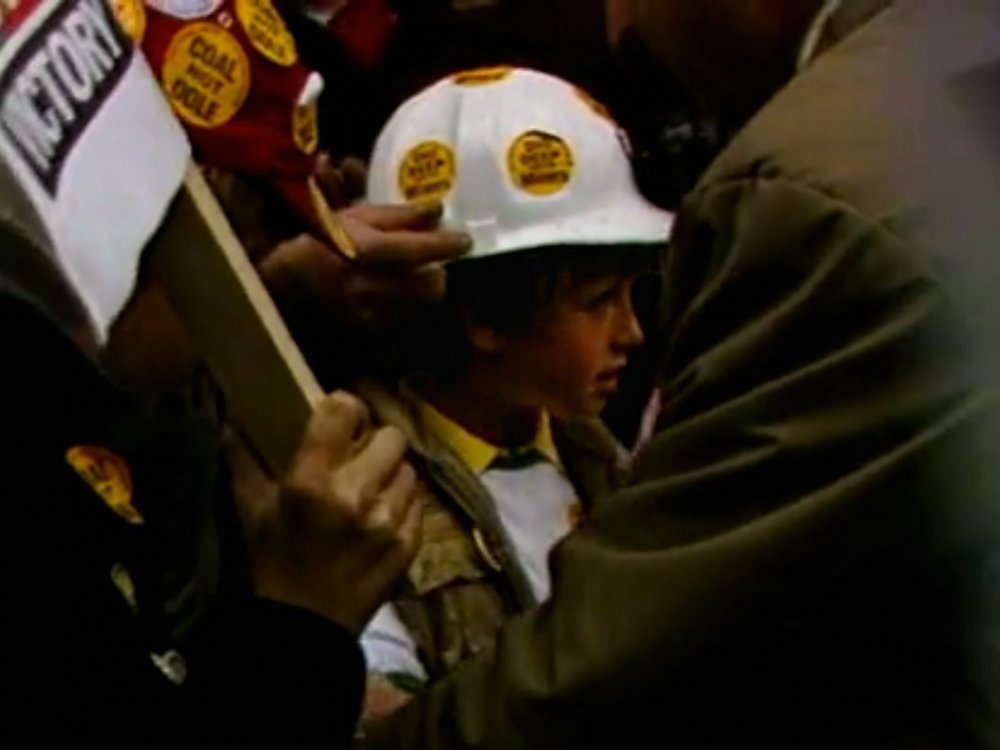 ► Click here to watch Durham Miners Rally 1984 No. 1: Banners and Arrival at Racecourse on the North East Film Archive website

“Gi’s a job,” comes a voice from among a crowd of people tramping downslope to Durham’s Old Racecourse, to hear – as (nearly) every year since 1871 – speeches by Labour and trade union leaders ranged on the platform.

Two yellow-dotted siblings are chivvied into side-by-side position by a photographer at 1m 13s. The boy’s white hard hat, with cap lamp, is adjusted on his head by hands belonging (odds are) to his father, who we can’t see, swallowed in the jostling. Tied as if with parcel string into her pink windbreaker, his sister has her hands full: in her left, a collection tin, in her right, chocolate, which she is bolting, camera be blowed.

At 2m 15s, it’s her turn to be fretted over: we can assume it’s her mother trying to rectify her paper hat, folded of a Socialist Worker poster and bearing the slogan ‘Victory to the Miners’. Like the yellow ‘Coal Not Dole’ stickers, issued by the National Union of Miners, that collect on the marchers’ clothing like flower pollen on bees, placards carrying this incantation and others the headline of that week’s paper (‘United We Can Win’) are rampant. The first such placard we see, in the opening frame of this month’s clip, is upside-down. The holder, yet to hoist it, fixes her kid’s black bin-liner-poncho – because it’s raining on this second Saturday in July in 1984.

Footage of the Durham Miners’ Gala isn’t hard to find. In addition to this film, there are a further four in the online catalogue of the North East Film Archive to feature images of the longstanding annual event. These films have much in common with each other, both in terms of what they capture (the crowds, architectural and topographical markers) and how (camera angles, sequencing). But as Jarrow-born playwright Alan Plater maintained in his 1983 documentary for BBC1 North East, which he narrated, each year’s rally “carries its own unique echoes”, and this is no less true of footage of the event, locally known as the Big Meeting.

The acoustics are good in this clip of the 1984 Gala, which, although cancelled, went ahead anyway. Applause at the passing of the Cortonwood banner (1m 32s) buttons down the year. Cortonwood mine in South Yorkshire was among the 20 pits listed as scheduled for closure in an announcement made by the National Coal Board that March – four months previous to the Meeting we see here. A subsequent statement named Cortonwood one of five mines to be closed within the immediate five weeks, to which its workforce responded with a walkout and the Yorkshire Area’s NUM with a call for official action. Cortonwood staff had been picketing just short of a week when NUM president Arthur Scargill declared a national strike.

Scargill crops up in the above footage in more ways than one: the captions of homemade posters (2m 00s and 8m 24s) poke fun at his otiose comb-over, chaffing the former miner for its resemblance to shredded wheat; a marcher yells his name after a two-car motorcade (3m 20s); and, shoulder-to-shoulder with Dennis Skinner, he troops into view on Elvet Bridge (5m 45s), meeting eyes with the camera lens the instant he enters the frame, removing his gaze but momentarily before leaving at the other end.

You can’t miss him: the crowd bunches up behind him, the people more compactly packed in. But he’s also made conspicuous by the woman on his left, who wears a calf-length pastel-blue coat. Brickwork and St. Nic’s at her back, the sky a nonentity-white, she flames like a pilot light: a pale fire against the motley browns of her surroundings.

She’s not the only woman to make her presence known. A plastic Maggie Thatcher – latex expression inflexible as her policy; hard-set as the Conservative agenda to geld trade unions by halting coal production – strays into range of the camera (6m 24s), looking lost. The hooded lids and perfectly circular absences where eyes should be lend this impersonator a panicked, pleading appearance – quite as the Prime Minister might look if she were thrown into this mix. 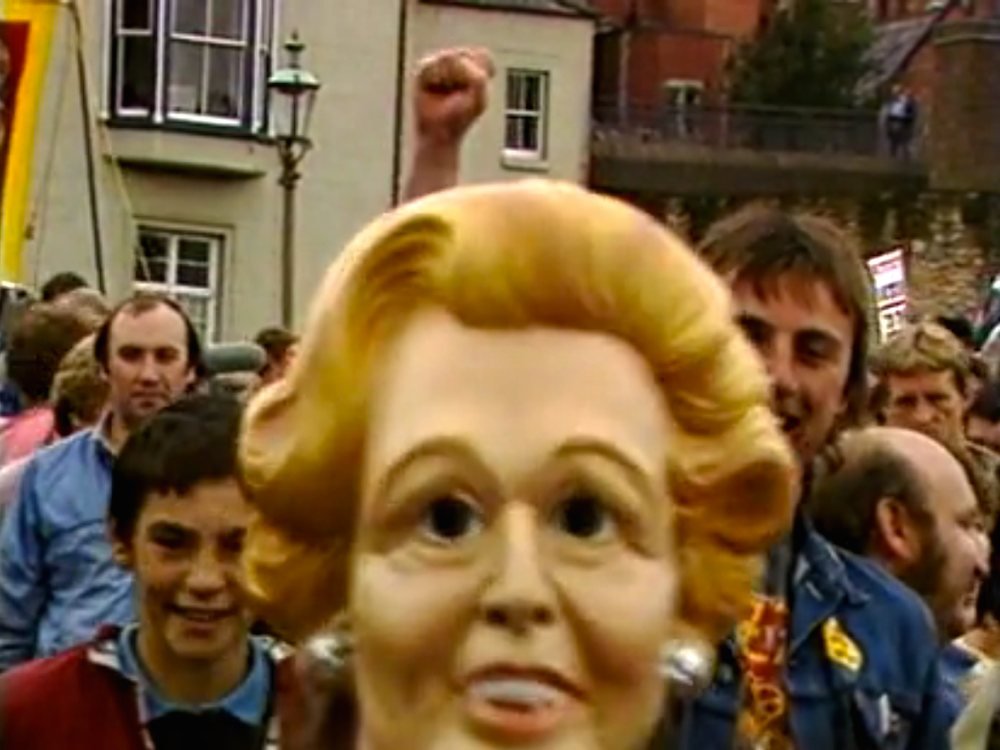 At 6m 28s, the mask-wearer reaches middle-frame and turns its two coal-holes upon the camera. At that moment, a marcher stood a metre or so behind her drives his fist into the air, effecting a split-second’s ideogram: a raised fist taken root in the baked meringue of Maggie’s hair. Emblem of resistance, erumpent! The Baroness’s head impaled! One could scarcely hope for a better illustration of the hostility between miner and the Iron Lady than is conferred by this unwitting coalition of fore- and background. (Or am I conditioned by the socialist heraldry embroidered onto the miners’ union banners to discover motifs where they weren’t put by design?)

It’s part of the appeal of this film that its quotient of women and the screen-time allowed them reflects women’s involvement in the yearlong miners’ strike. The only conversation recorded in the film is had by women: members of the North Derbyshire chapter of the Women’s Action Group, come up by bus, now gathered on the Racecourse, the rally’s finish-line, where they wait for addresses by Dennis Skinner and other guest speakers.

Beginning at 18m 35s, the conversation – jocund, and a touch performative on account of the camera’s proximity – gives rise to the clip’s second allusion to the fact that a film is in process of being made; that there are boxes need ticking, objectives to be met. “Don’t take any notice of them: they’re just playing, it’s not really switched on,” soothes one of the women (the least camera-shy and feasibly ‘in’ on the filmmaking exercise) as the crew’s eavesdropping begins to tax the group’s ability to act natural. 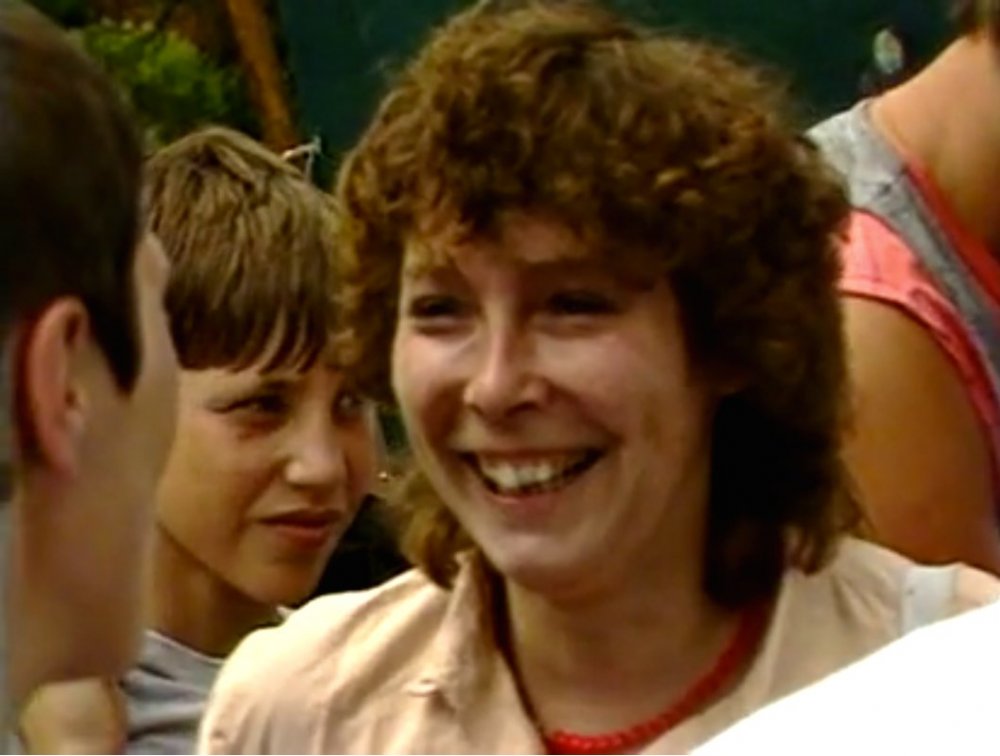 Stationed under their banner, the women talk of being fed up with buffets (“no bloody more”); of political luminaries and police escorts; and how a dearth of drink at a recent meeting cost them attendance, “‘cause they took one look, seen bar was shut, and upped it, your miners.”

Their back-and-forth, in metrical Derbyshire dialect, about the goings-on behind-the-scenes of the miners’ strike is fitting coda to a film that shows the results of months of organisation by as many separate mining communities as there are branch banners, and more. It’s fitting coda, because the women are in high spirits, and this is something can be said of the better part of the marchers that pass within sight of this camera. A purl of laughter is the first sound we hear, and there’s plenty piss about: a man shunts his mate into shot (11m 21s); another appears from left-of-screen, like a roly-poly doll pushed (3m 52s), smiling ear-to-ear, unlit tab between his lips, whence comes the muffled salutation, “How are you, my darling?”

So what ‘echoes’, do you suppose, will distinguish the 2016 Gala? How, when we watch it back, the inevitable footage, will we tell this year’s from the others? Ah, marra. That’s easy. 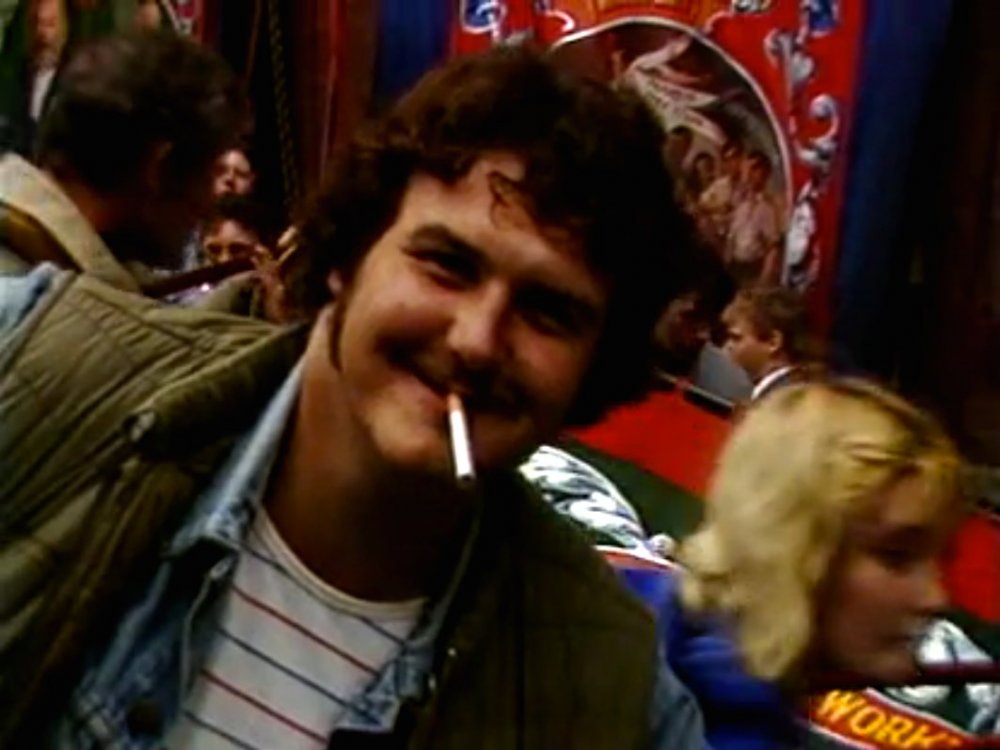 Kellingley colliery, the UK’s last deep mine, closed on 18 December 2015. This year’s Gala will be the first at which none of the deep mines represented is in operation. When the above footage was shot, there were 133 in working order, employing 180,000 between them. Now, only open-cast mines remain, and these number 26.

In December, reporters were dispatched to North Yorkshire to film the Kellingley face workers as they surfaced from their final shift. These 450 were the last to take that last lift-ride to the pit top. There has been no follow-up since this initial, superficial pother in the press.

What does a severance package of 12 weeks’ average pay mean to the miners made redundant? What happens to a man for whom the mine meant his social identity as well as an earning? What becomes of the communities for whom a coalfield meant social cohesion? And can a way of life expire as quickly and unalterably as coal shafts can be capped and a centuries’ old industry drawn to a close?