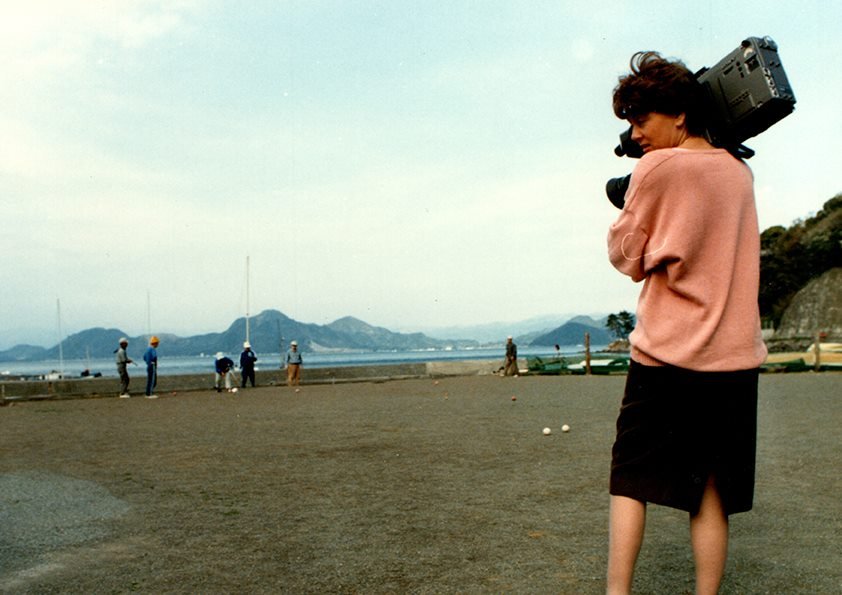 Conceived and designed by Luigi Alberto Cippini in the spaces of Fondazione Prada’s Venetian venue, Belligerent Eyes is an experimental platform devoted to the progression, evolution and enhancement of cinema, consisting of a series of lectures and an online site for digital interaction. “At a time when cinema has lost its capacity to assert itself as the beholder of the collective imaginary,” explains its website, “Belligerent Eyes aims at introducing new didactic perspectives in both filmmaking and film studies.” From 25 August through 2 September the site hosts Japan 1984 – 7 Betacam Tapes, never-before-seen video material shot by Michelangelo Antonioni in Japan.

The tapes were occasioned by a TV interview Antonioni gave to the godfather of postwar Italian cinema, Gian Luigi Rondi, in 1985 wherein he mentioned visiting the Sony camera factory in Japan. Little is known about the exact reasons the Italian director travelled to Japan in the mid 80s, aside from some generic research purposes that coalesced in the final edit of Un viaggio in Giappone (1990), then edited down to the shortened version Un pò di Giappone. (Both titles go uncredited in any of Antonioni’s official filmographies.)

Japan 1984 – 7 Betacam Tapes, then, more than a cinephiliac curiosity or a lost fetish for obsessive Antonionists, is an embryonic possibility of what could have actually been made by one of the most unassuming masters of modernity, had the inscrutable ways of the film industry not impinged on his career. The genesis of this video material though seems to be fortuitous in nature as the director and his wife were allegedly given a Betacam camera while staying at the Grand Prince Hotel Akasaka, designed by the famous architect Kenzo Tange. 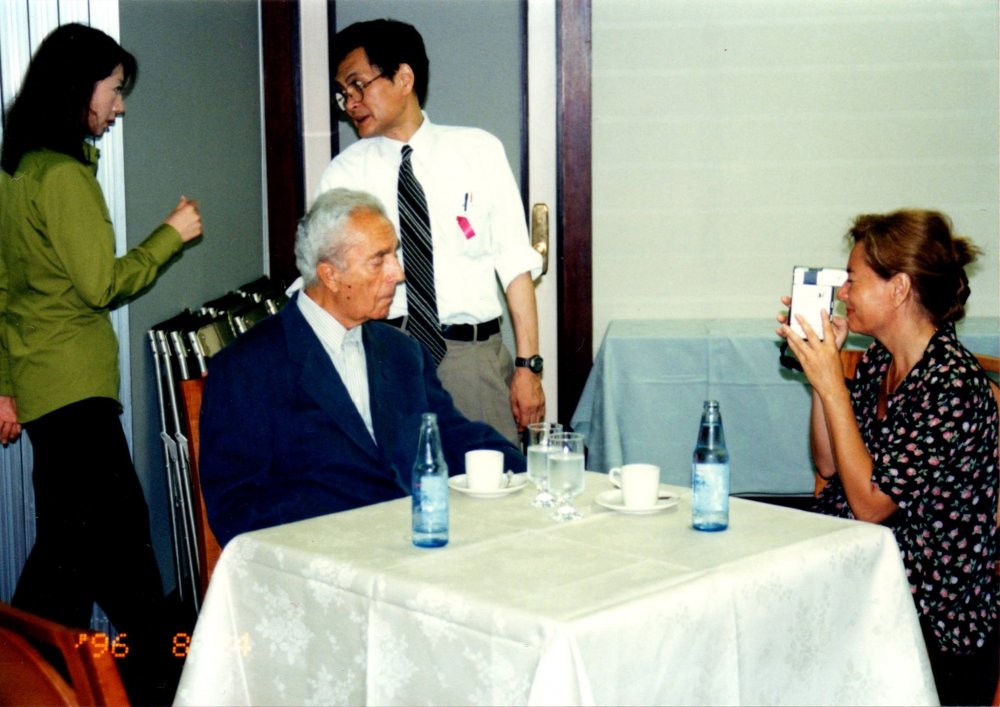 Twenty years after The Red Desert, Antonioni enters again a factory to chromatically measure the difference between film and magnetic tape and once again ascertain the affective repercussions of technological progress. The Italian director looks at the alien marvels of Japan without trying to extrapolate any pre-established meaning; quite the contrary. To a traditional dinner served by women dressed in what appear to be traditional robes Antonioni alternates youth subcultures performing a cannibalistic pastiche of regurgitated American culture in the streets of Tokyo. But his dwelling on Japan’s cultural extremes somehow escapes even the high-minded stereotypes that typicaly accompany any discussion about the Asian island proverbially caught between tradition and modernity.

Despite the provisional nature of these tapes, Antonioni’s pointed stare can be evinced in what essentially amounts to a sort of metaphysical home-movie shot with his wife Enrica Fico. For a director who had so clear-sightedly filmed the emotional impact of modernisation on (sentimental) relations, to travel to Japan in the 80s somehow constituted a verifying journey into his own intuitions. Curiously enough, Tarkovsky too had chosen Japan to depict a hypothetical future at the beginning of his 1972 Solaris when a man drives from Narita Airport to Tokyo and off into the folds of time. 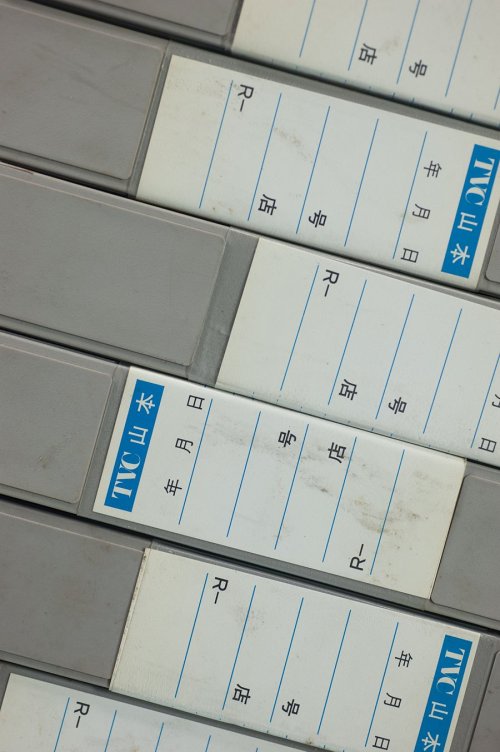 Rather than a fleshed-out travelogue though, these Betacam rushes feel like notes Antonioni was taking, a sort of visual reconnaissance of a planet contradictorily stuck between hyper-modernist impulses and conservative hesitancy. There he is, ironically measuring the familiar against the alien, weighing up with curious detachment whatever goes on around him, at once at ease and set at odds with his surroundings. We enter a bizarre arcade where scores of men (and the occasional woman) play a weird game-machine where steel marbles are dropped from above into a vertical labyrinth behind glass and then come out, sometimes in greater numbers, at its bottom. Seemingly uninterested in the logic of the game, Antonioni films the line-produced monotony of this strange form of entertainment soundtracked by the incessant sound of falling marbles and the electronic bleeping of the contraptions they fall through.

From the wearisome noise of the neon-lit arcade we move on to the immaculate silence of a zen garden where the carefully choreographed space allegedly reflects the supposed balance of a nondescript inner spirituality. Scenes from a religious liturgy are followed by a nocturne sequence of neon advertisement signs, deprived of diegetic and non-diegetic sound. These cacophonous contradictions keep resurfacing throughout Antonioni’s taped Japanese journey as he once again alternates shots of a textile factory and its mechanical precision to the ancestral wisdom of tea-making. In another rush, while walking the streets, Antonioni suddenly spots a traditionally dressed woman (a geisha?) and orders his cameraman to film her. A series of such women shyly evading the camera ensues. The director never seems to presume to know what’s going on around him; he asks with aloof curiosity and is never final in his comments though he also avoids that phoney reverential respect ‘responsible tourists’ accord to exotic locations.

It’s tempting to imagine what could have become of these tapes had Antonioni continued to work on them, shaping them into something more definitive than mere cinematic annotations. Only a few years earlier Chris Marker had found in the impenetrable tapestry of Japanese cultural iconography a fertile launchpad for his own lyrical, intertextual journeys in Sans Soleil (1982). But the 80s for Antonioni marked the beginning of an artistic demise that effectively lasted three decades, as the director of L’Eclisse – following his 1980 The Mystery of Oberwald, which was the first ‘electronic film’ (ie video) to be screened at the Venice Film Festival – struggled to get his ideas financed and walked into multiple dead-ends. Watched after or bearing in mind Antonioni’s early shorts about his pre-industrial native surroundings, these Japanese Betacams somehow evoke the universalism of his aesthetic intuitions and their (post-)humanist formalism. Wherever his eyes set down, Antonioni was able to visually detect what others could only explain with words, and these Japanese tapes, in all their definitive transience, are no exception.