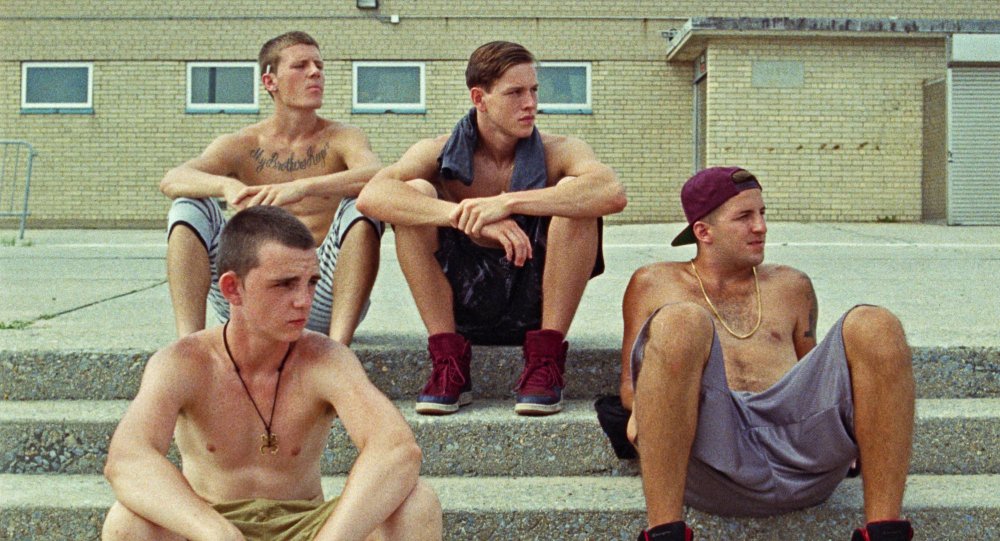 Sublimated grief sharpens an already troublesome sexual appetite in this atmospheric sophomore feature, and only drugged oblivion offers respite from doubt and angst. Though it can be a challenge to sustain sympathy for protagonist Frankie, a Brooklyn teenager whose private crisis over his sexuality causes him to treat his sister, mother, girlfriend and secret male lovers with escalating cruelty, British actor Harris Dickinson brings an extraordinary depth to his portrayal. Through Dickinson’s subtle flickers of expression, we observe the struggle between conformism and integrity that rages under Frankie’s surface cool: his joy at being accepted, either by a fly-by-night cruising companion or by his thuggish heterosexual friend group; and his raw fear of having his secret exposed.

In the aftermath of his father’s slow death from cancer, Frankie seems compelled to bring together his two lives, as daytime ‘beach rat’ and nocturnal subscriber to online gay chatrooms. It’s a prospect that lends a doomy suspense to the narrative, but also bears the clear ring of psychological truth.

Frankie’s desires – to be ordinary and also special, totally straight and also openly gay, satisfied but also numb – may be mutually exclusive but are no less intense for it. To sustain credibility with his buff, taciturn, straight pals, Frankie must supply them with weed, which he obtains from the strangers he meets online for sex. His decision to bring his friends with him to meet one of his gay contacts is partly just a means to an end: he’ll pretend to be gay, goes the plan, so that everyone can get high. But it’s a choice with multiple layers of ulterior motive: Frankie’s sadistic desire to put another gay man at risk of homophobic violence; his masochistic need to unveil his own hidden life and take the violent consequences; and his sexual curiosity, since the whole set-up has a whiff of a potential orgy about it. 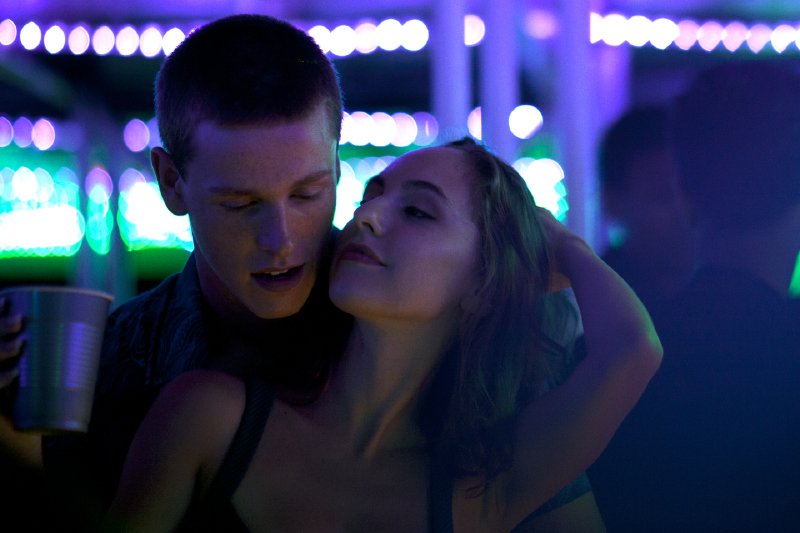 Dickinson with Madeline Weinstein as Simone

The road to a climactic confrontation is a slow and meandering one. “Fireworks are, like, the opposite of romantic,” Frankie tells his would-be girlfriend Simone at the start of the film, and director Eliza Hittman and cinematographer Hélène Louvart would seem to share his disdain for showy spectacle: shot on 16mm, the film is as low-key and melancholy in its look as in its mood. Its mix of murky, up-close realism and dreamy vagueness is reminiscent of Gus Van Sant’s and Larry Clark’s detailed, faintly voyeuristic depictions of teen life, as well Matt Porterfield’s unvarnished but elegant portraits of urban disaffection.

Less nuanced is the portrayal of Simone, who despite Madeline Weinstein’s spirited performance is granted little interiority beyond her slavish desire to have Frankie as her boyfriend. Frankie’s friends are also a shadowy collective presence – more muscular, threatening set-dressing than distinct individuals. That the film yokes itself so closely to Frankie’s perspective provides a tremendous showcase for Dickinson, and plentiful opportunity to meditate on Frankie’s complex motivations; but it also means that other characters tend to lack definition.

Performances are fine across the board, however, with Kate Hodge a warm, watchful, sterling presence as Frankie’s mother, and Harrison Sheehan particularly touching as Jeremy, the sweet-natured online date who bears some of the brunt of Frankie’s self-hatred. And Simone does get to identify a piquant sexual inequality when she observes, in response to a query from Frankie: “Two girls can make out and it’s hot; when two guys make out, it’s just gay.” 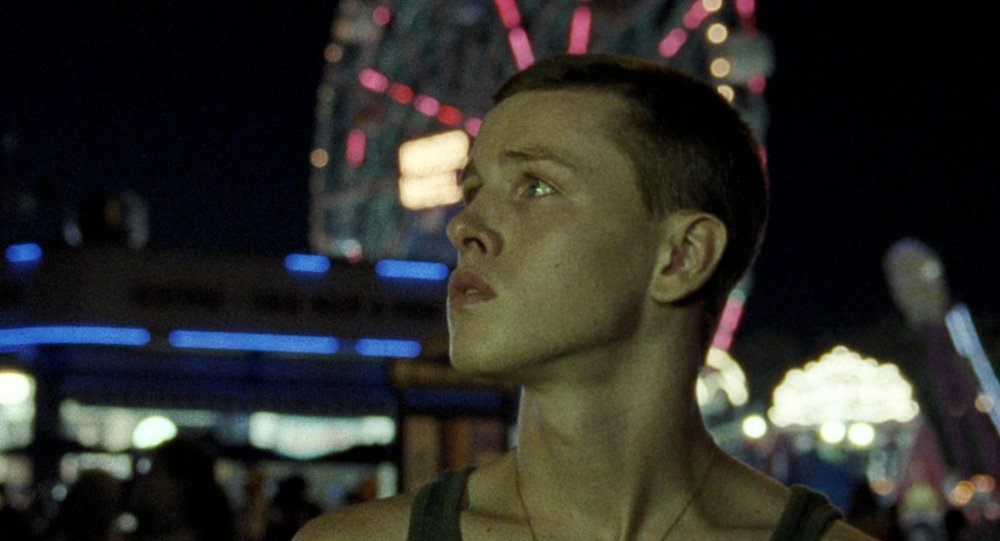 What ‘gay’ means to each of these characters is a fascinating, shadowy element of Hittman’s script. “Don’t forget to act gay!” one of Frankie’s straight friends teases as he heads off to meet a contact, ostensibly just for a drug connection.

Forgetting to act straight is, of course, more of a preoccupation for Frankie. “I don’t think of myself as gay…” he loftily tells Jeremy, who gently bats back a reminder: “But you have sex with men.” Frankie, we sense, would like to take the pleasure of being gay without having to wear the label; his probing of whether Simone would find it hot to watch two guys make out, and whether his friends would mind being around gay guys if weed were involved, indicates his yearning to change everything without having to change a thing.

Only drugs and alcohol take the edge off his private turmoil. When his mother, finding him high as a kite, initiates a conversation in the hope of hearing some deep confession or expression of need, it’s Frankie’s happiness rather than his pain that comes between them. “I feel so fucking good right now,” he tells her, “I just wish I could feel like this all the time.” It’s a poignant, frustrating reminder of the gaps between parents and kids; between our inner and outer selves; and between short-term pleasure and long-term psychological health. 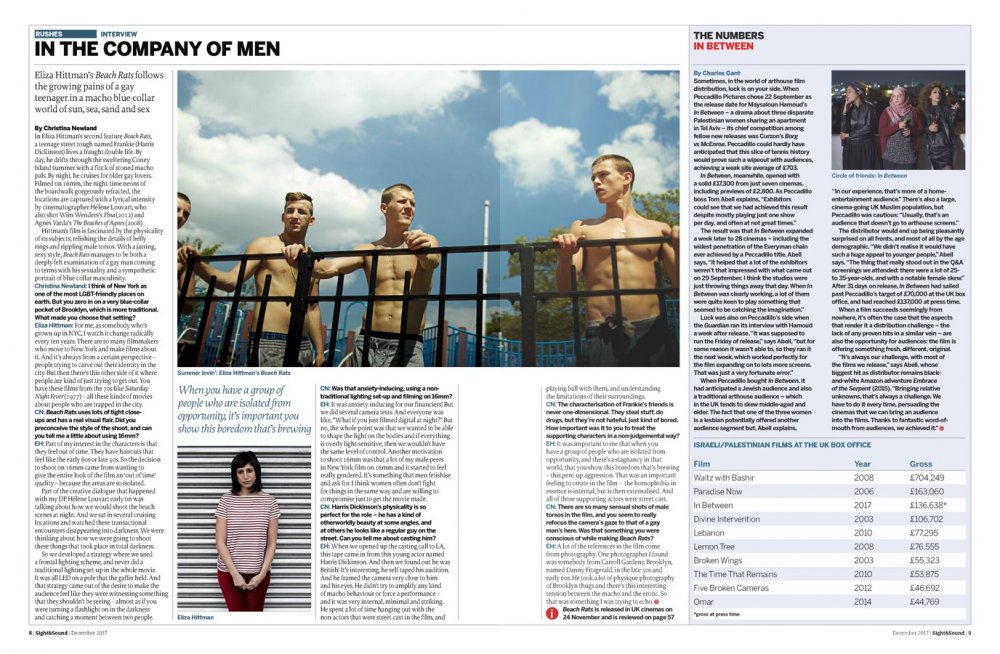 Interview: In the company of men

Eliza Hittman’s Beach Rats follows the growing pains of a gay teenager in a macho blue-collar world of sun, sea, sand and sex. By Christina Newland.

Related to Beach Rats review: Eliza Hittman lights a fuse in the closet