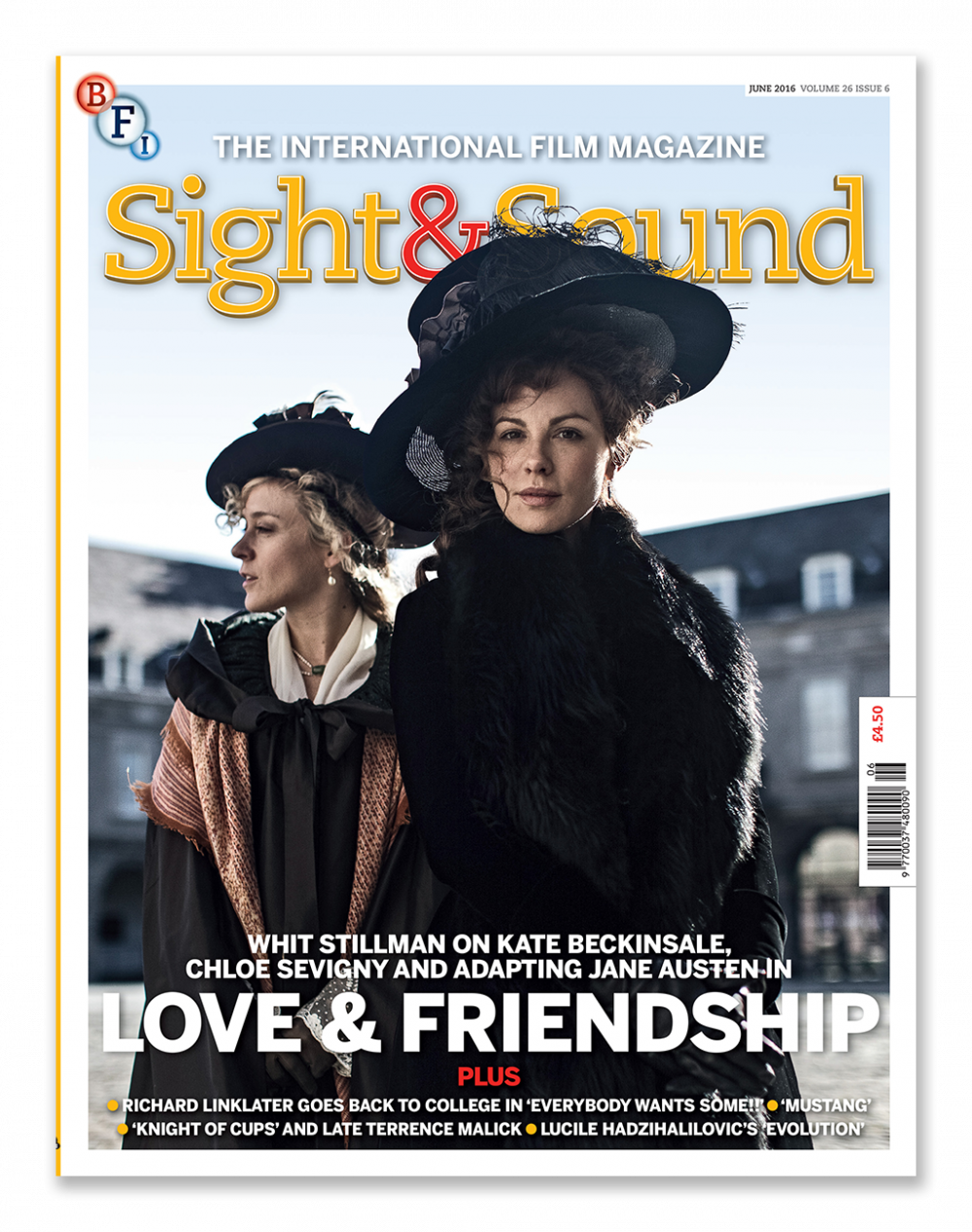 Hold on to your bonnets, for Jane Austen is coming to the screen in a way you’ve never seen her before: downright devious, manipulative and totally unprincipled.

On UK newsstands 3 May

Whit Stillman’s gloriously acid Love & Friendship reunites Kate Beckinsale and Chloë Sevigny, some 18 years after their previous Stillman double act in The Last Days of Disco. Beckinsale’s scheming widow Lady Susan is the delightful viper at the heart of this comedy of romantic entanglements. In our extensive cover interview, Stillman talks about the enduring appeal of Austen, adapting an epistolary novel but abandoning the format and working with Beckinsale, Sevigny and his great ensemble cast. He also roves over his career since his 1990 debut Metropolitan, discussing the art of editing, making a pilot for Amazon and directing an episode of the most un-Stillman-like TV series Homicide: Life on the Streets.

In our other features, Deniz Gamze Ergüven discusses her debut feature Mustang, a modern fairytale about five sisters in rural Turkey; Geoff Andrew looks back on a decade of masterful Romanian cinema, finding that with Radu Jude’s latest film Aferim! it’s still as inventive as ever; Lucile Hadzihalilovic talks about her surreal coming-of-age fantasy Evolution, 11 years in the making; Kent Jones muses over late Terrence Malick films; Jeremy Saulnier delves into his savvy thriller Green Room; and we explore Kathleen Collins’s overlooked 1982 indie gem Losing Ground, which explores issues of class, race and gender with humour and a lightness of touch.

Finally, we couldn’t help but use Richard Linklater’s portrait of Texan university life Everybody Wants Some!! as an excuse to reflect on the larger-than-life genre of American college movies that stretches back to Harold Lloyd and Buster Keaton.

Elsewhere in this month’s issue, we have reviews of every new UK cinema release, including Laurie Anderson’s Heart of a Dog, an essay about death and her terrier Lolabelle, Stephen Frears and Meryl Streep’s Florence Foster Jenkins and Ben River’s Paul Bowles-inspired The Sky Trembles and the Earth Is Afraid and the Two Eyes Are Not Brothers.

Our Home Entertainment section hails a new 4K restoration of Kurosawa Akira’s King Lear adaptation Ran, and the long-awaited release of Edward Yang’s 1991 masterpiece A Brighter Summer Day, as well as selecting some of the most exciting new DVD and Blu-ray releases.

Actresses take over our books section this month with reviews of biographies of Meryl Streep and Elizabeth Taylor, plus a timely study of freelance actresses and the power they possessed in the Hollywood studio system.

We say farewell with our endings column, exploring Tilda Swinton’s silent gaze to the camera at the close of Sally Potter’s Orlando. 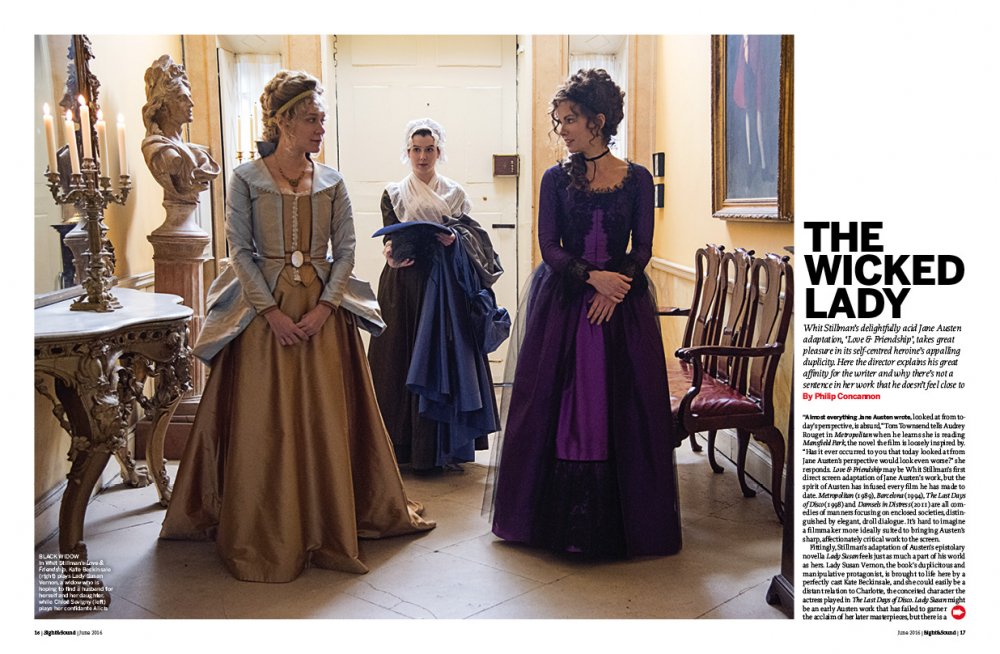 Whit Stillman’s delightfully acid Jane Austen adaptation, Love & Friendship, takes great pleasure in its self-centred heroine’s appalling duplicity. Here the director explains his great affinity for the writer and why there’s not a sentence in her work that he doesn’t feel close to. By Philip Concannon. 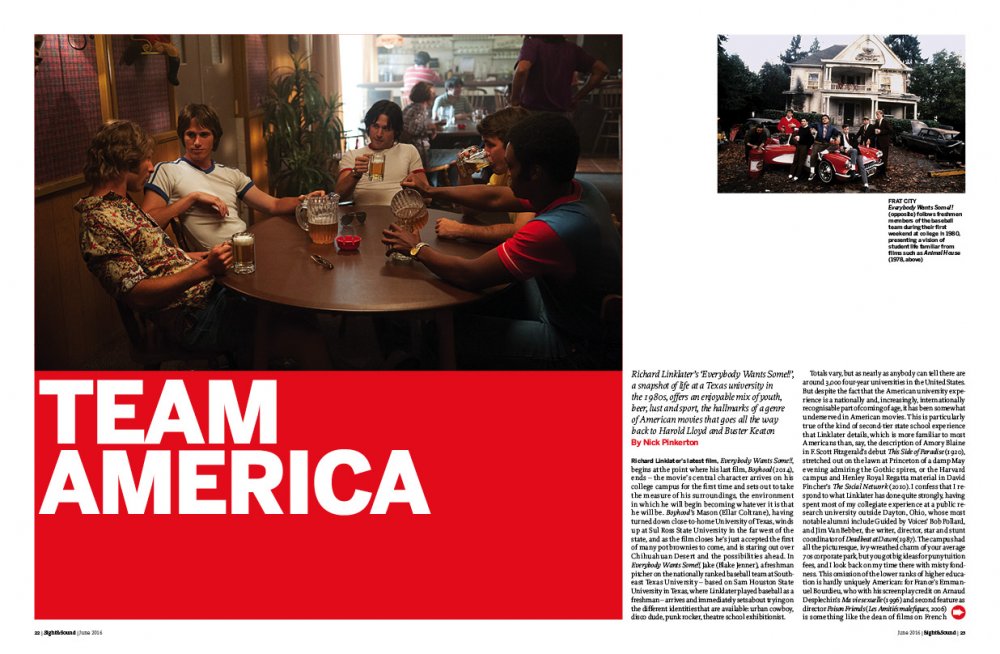 Richard Linklater’s Everybody Wants Some!!, a snapshot of life at a Texas university in the 1980s, offers an enjoyable mix of youth, beer, lust and sport, the hallmarks of a genre of American movies that goes all the way back to Harold Lloyd and Buster Keaton. By Nick Pinkerton. 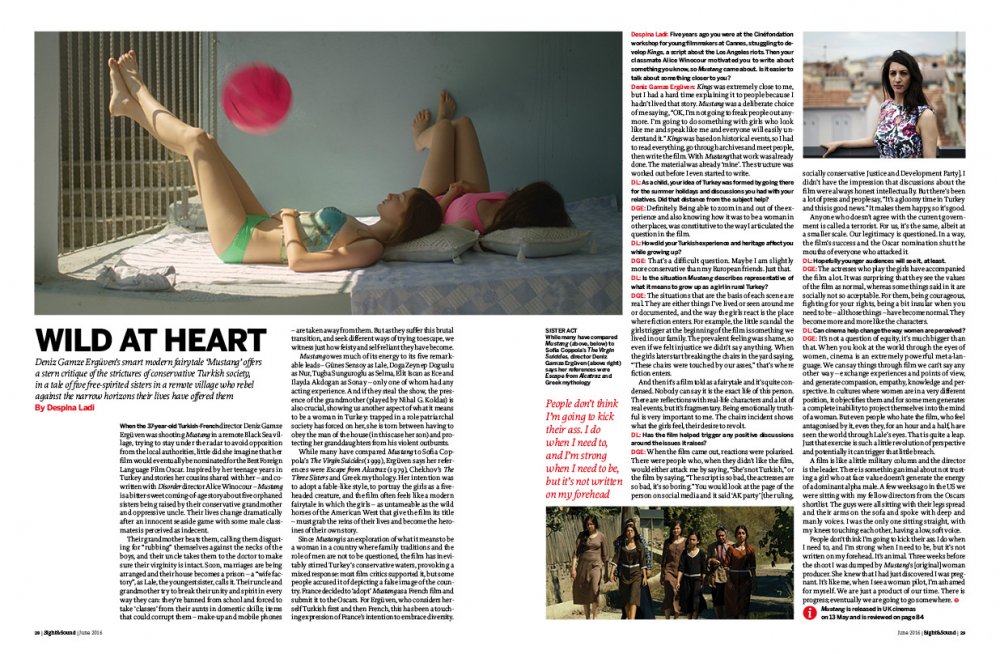 Deniz Gamze Ergüven’s smart modern fairytale Mustang offers a stern critique of the strictures of conservative Turkish society, in a tale of five free-spirited sisters in a remote village who rebel against the narrow horizons their lives have offered them. By Despina Ladi. 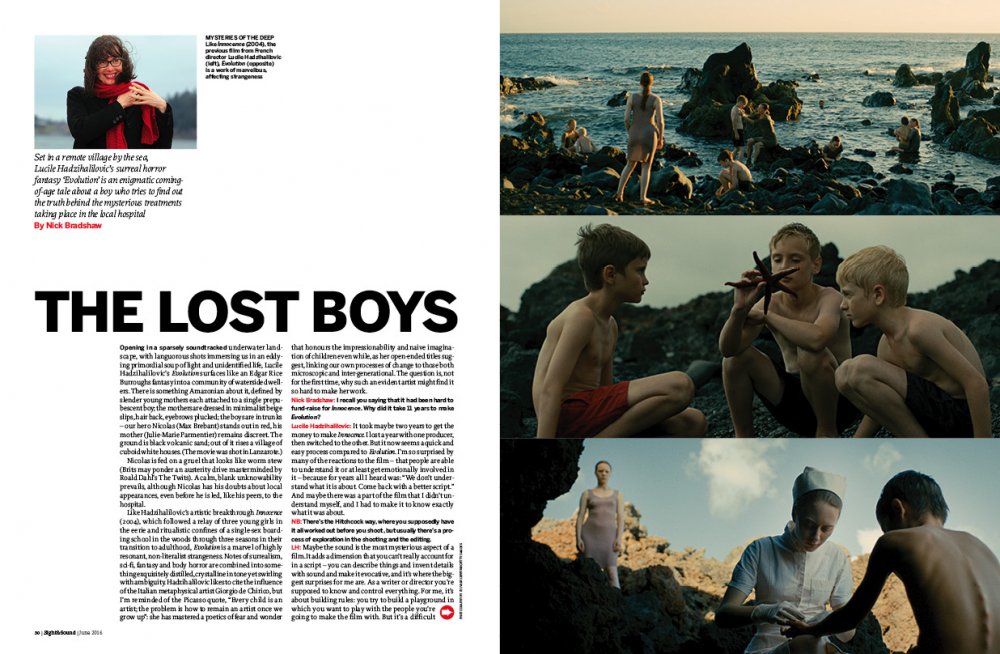 Set in a remote village by the sea, Lucile Hadzihalilovic’s surreal horror fantasy Evolution is an enigmatic coming-of-age tale about a boy who tries to find out the truth behind the mysterious treatments taking place in the local hospital. By Nick Bradshaw. 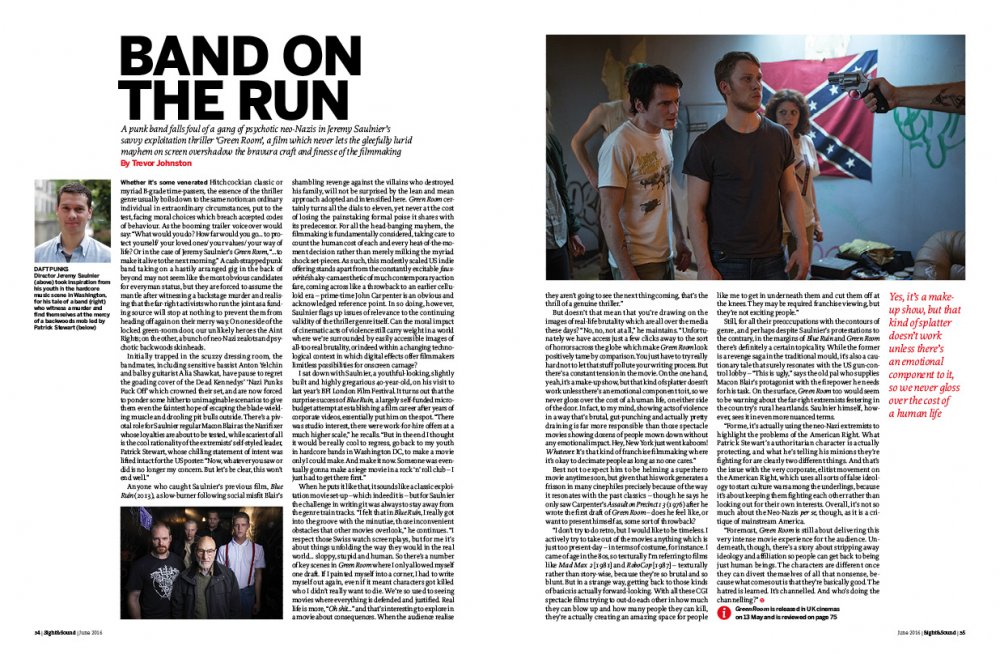 Band on the Run

A punk band falls foul of a gang of psychotic neo-Nazis in Jeremy Saulnier’s savvy exploitation thriller Green Room, a film which never lets the gleefully lurid mayhem on screen overshadow the bravura craft and finesse of the filmmaking. By Trevor Johnston. 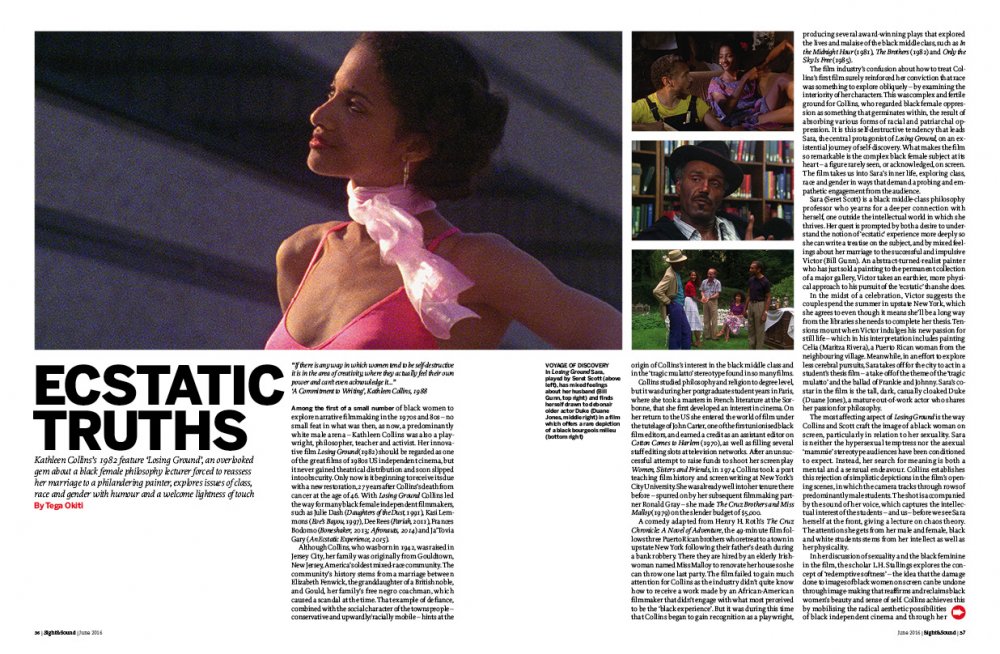 Kathleen Collins’s 1982 feature Losing Ground, an overlooked gem about a black female philosophy lecturer forced to reassess her marriage to a philandering painter, explores issues of class, race and gender with humour and a welcome lightness of touch. By Tega Okiti. 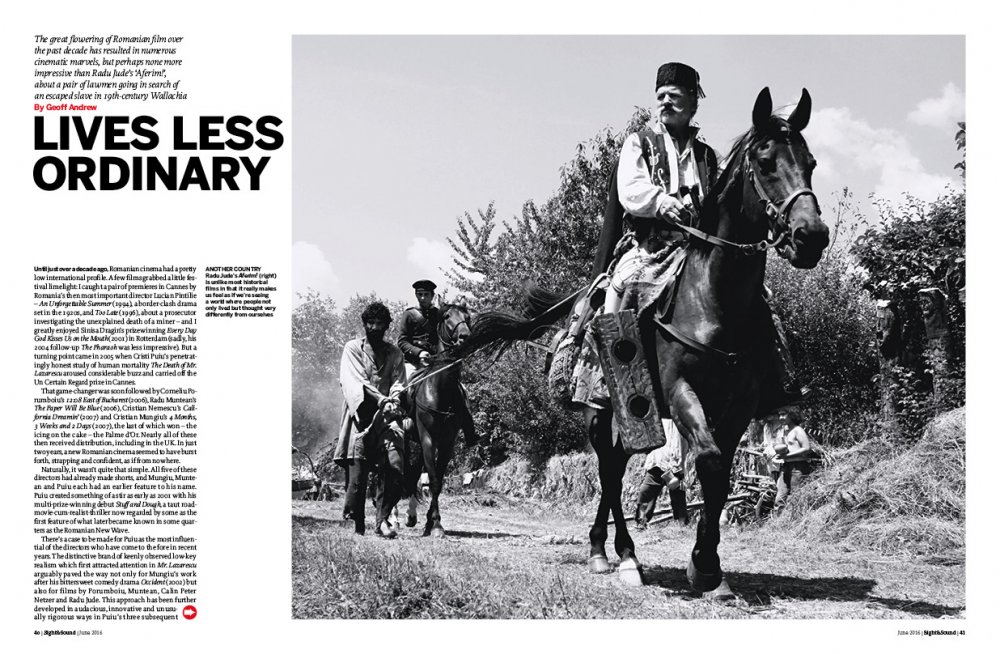 The great flowering of Romanian film over the past decade has resulted in numerous cinematic marvels, but perhaps none more impressive than Radu Jude’s Aferim!, about a pair of lawmen going in search of an escaped slave in 19th-century Wallachia. By Geoff Andrew. 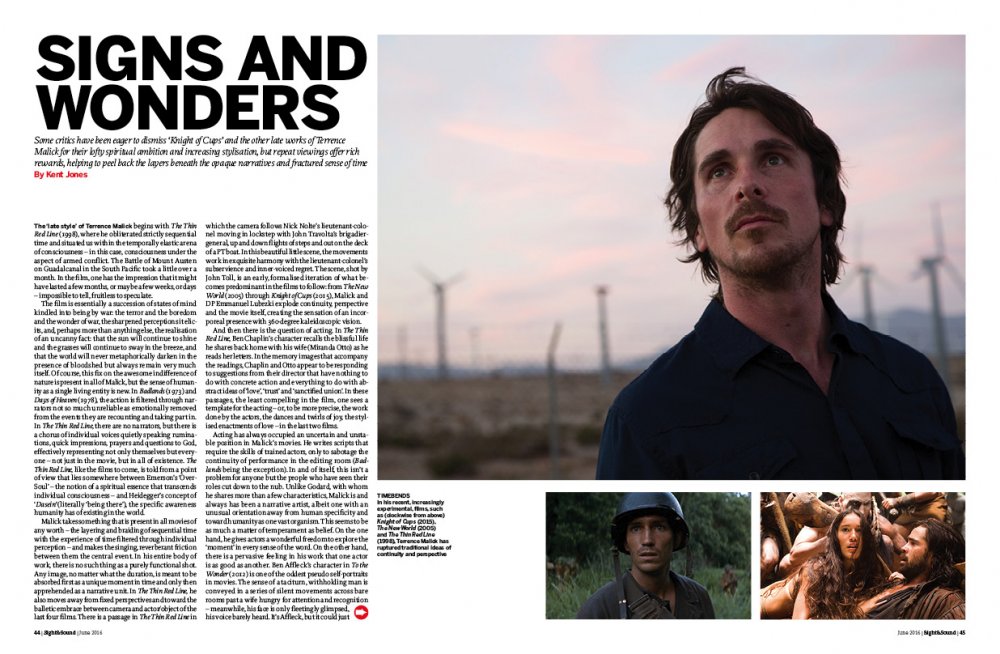 Some critics have been eager to dismiss Knight of Cups and the other late works of Terrence Malick for their lofty spiritual ambition and increasing stylisation, but repeat viewings offer rich rewards, helping to peel back the layers beneath the opaque narratives and fractured sense of time. By Kent Jones. 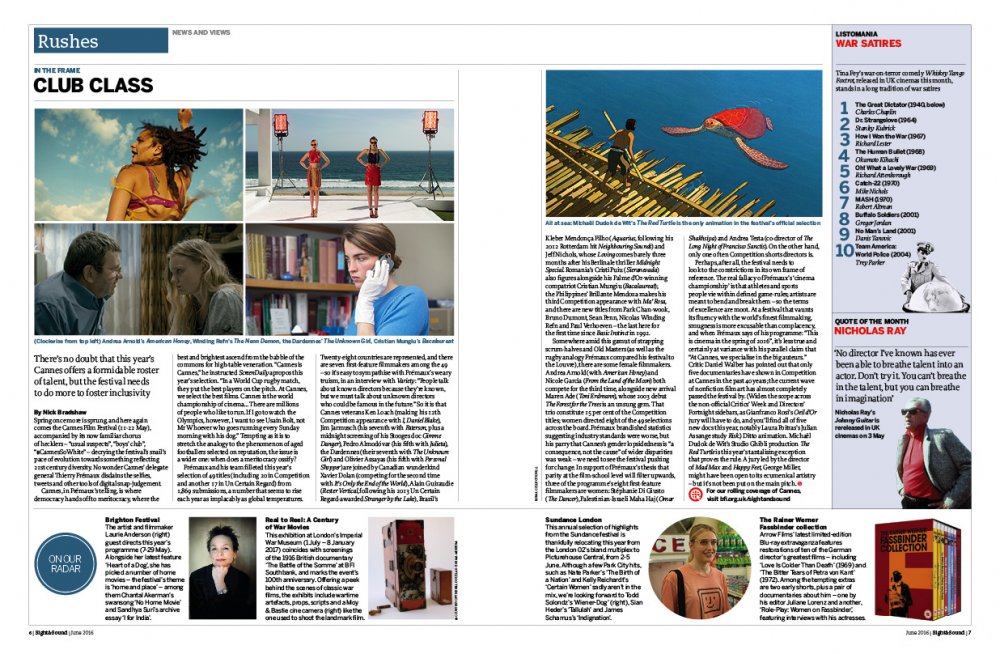 In the frame: Club class

There’s no doubt that this year’s Cannes offers a formidable roster of talent, but the festival needs to do more to foster inclusivity. By Nick Bradshaw.

In movies all baggage is emotional, signalling self-sufficiency, insecurity, availability – or simply that you can afford Louis Vuitton. By Hannah McGill.

Channing Tatum has always been comfortable with his onscreen physicality – he’s the Jane Russell of modern movies. By Mark Cousins. 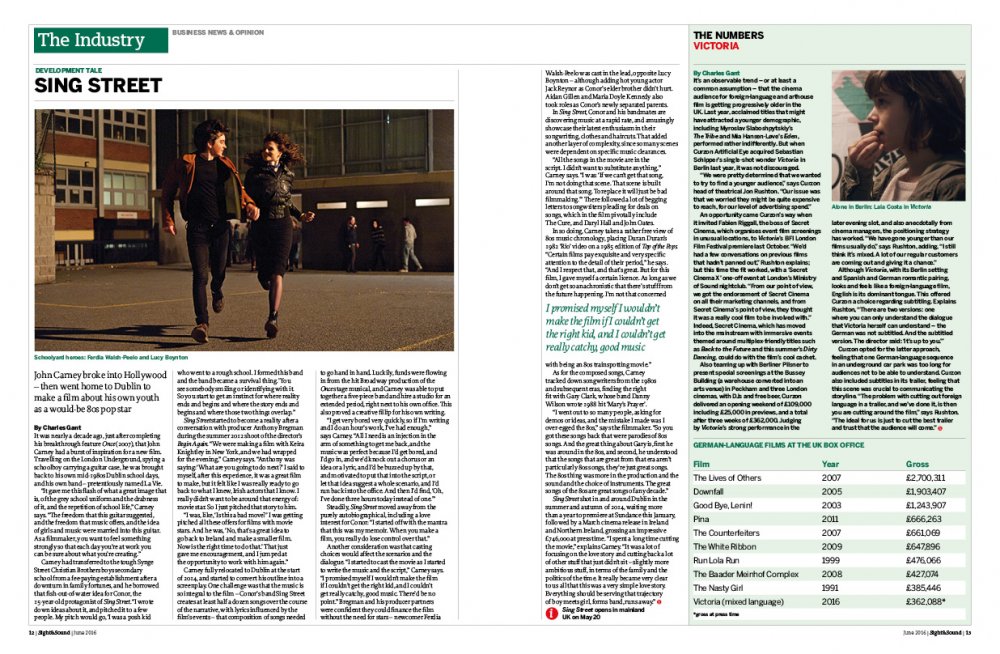 John Carney broke into Hollywood – then went home to Dublin to make a film about his own youth as a would-be 80s pop star. By Charles Gant.

Victoria and German-language films at the UK box office. By Charles Gant. 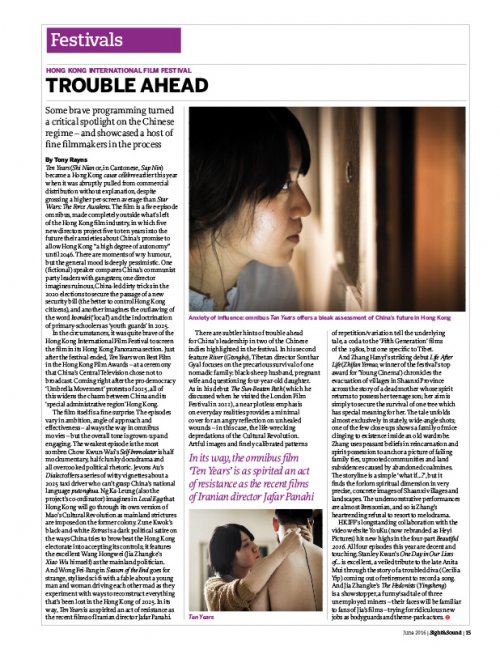 Some brave programming turned a critical spotlight on the Chinese regime – and showcased a host of fine filmmakers in the process. By Tony Rayns. 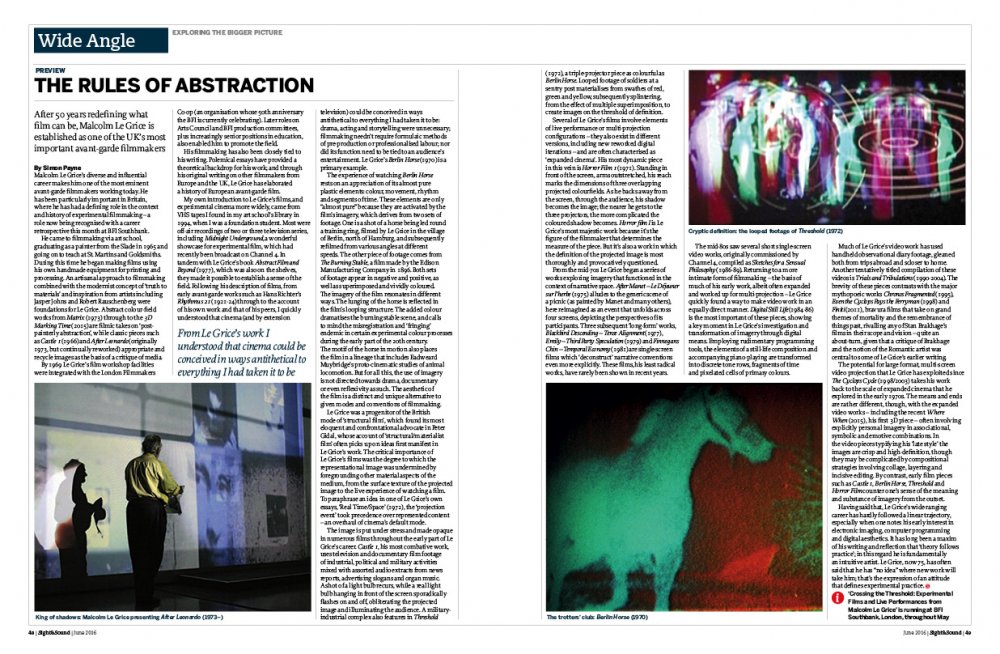 Preview: The rules of abstraction

After 50 years redefining what film can be, Malcolm Le Grice is established as one of the UK’s most important avant-garde filmmakers. By Simon Payne.

Nazia Hassan was the queen of playback singers in the disco era – and the closest Bollywood ever got to Donna Summer. By Geeta Dayal.

A German documentary about space was taking audiences on a cosmic trip more than 40 years before Kubrick. By Bryony Dixon.

Preview: Path of most resistance

Laura Mulvey and Peter Wollen showed that films could be a vehicle for theoretical enquiry every bit as effective as writing. By Oliver Fuke.

A project to uncover the history of amateur filmmaking by women in Britain has turned up some unexpected gems. By Roz Cranston. 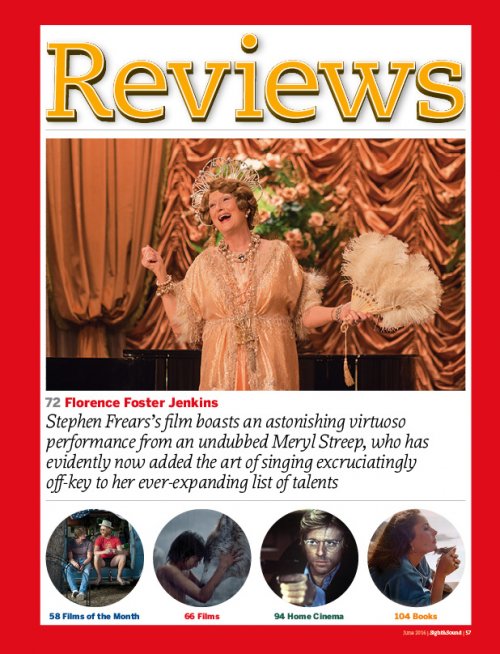 Arabian Nights: Volume Three – The Enchanted One
Everybody Wants Some!!
Heart of a Dog
The Sky Trembles and the Earth Is Afraid and the Two Eyes Are Not Brothers 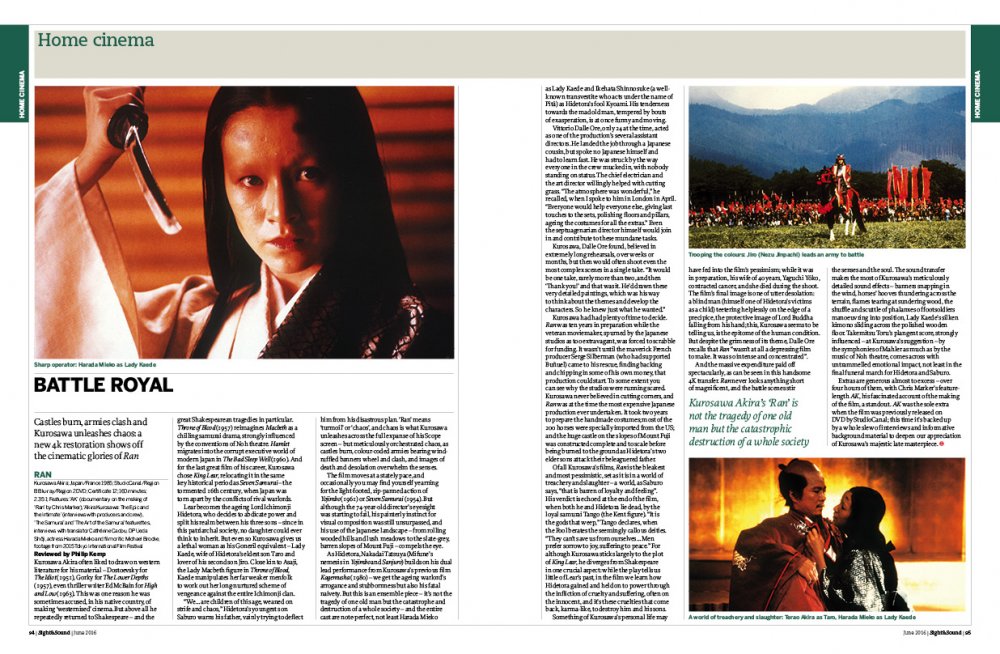 Edward Yang’s teens-in-tumult drama takes place against the backdrop of a country that is itself in the throes of adolescence. By Nick Pinkerton.

A sharp, funny look at the lot of the independent filmmaker is enlivened by cameos from a who’s who of industry figures. By Dylan Cave. 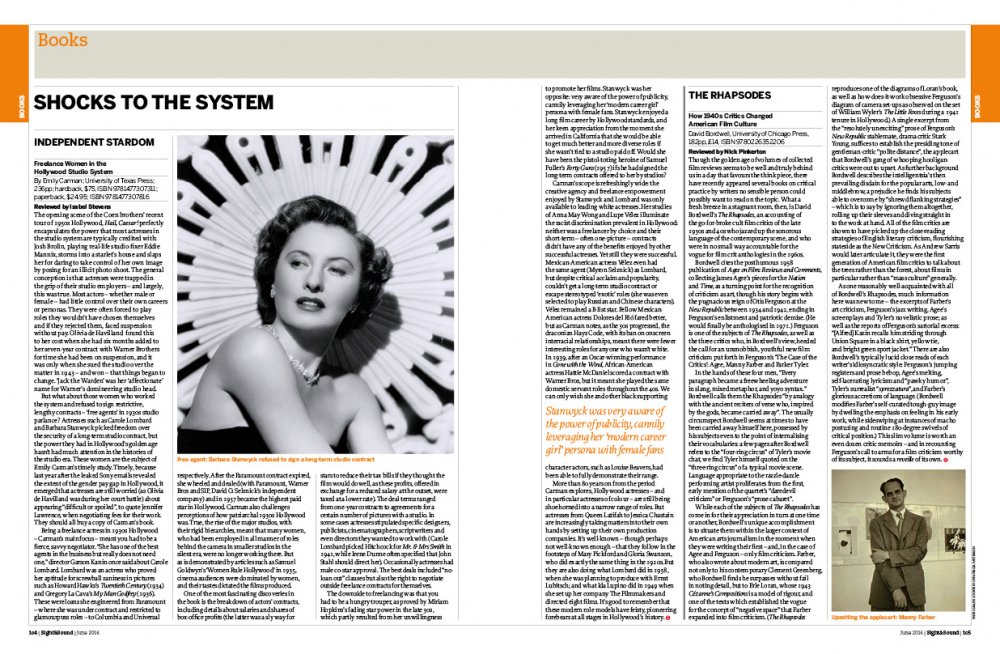 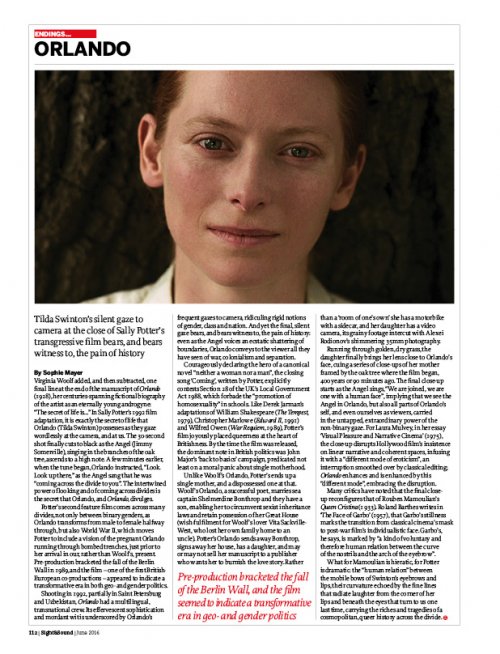 Tilda Swinton’s silent gaze to camera at the close of Sally Potter’s transgressive film bears, and bears witness to, the pain of history. By Sophie Mayer.