Over the past two decades Heinz Emigholz has made a remarkable series of filmic monuments to the Modern age through careful studies of the best of its architecture. With his new film The Airstrip, he drops the bomb on the whole thing… 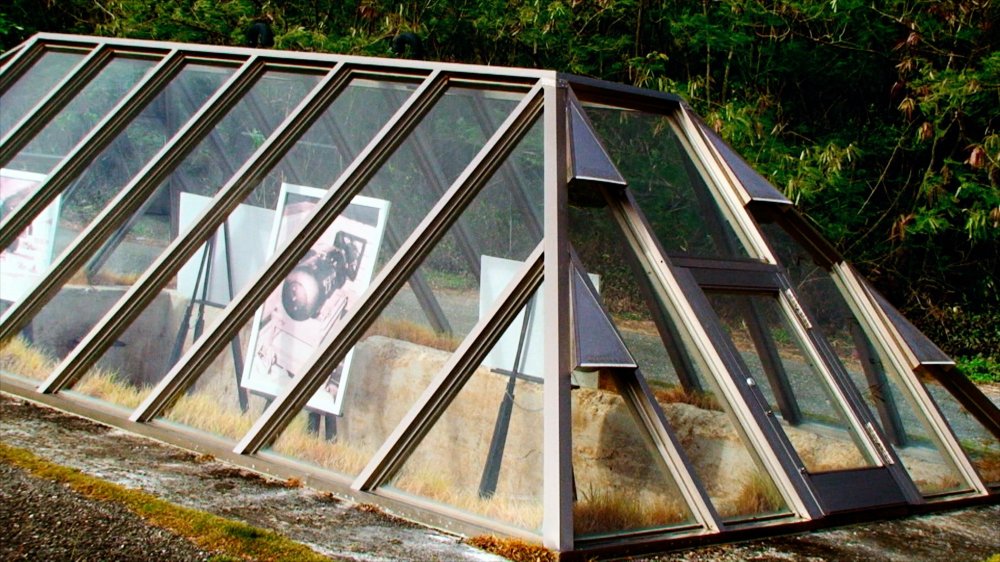 The Airstrip (2014): the no. 1 atomic bomb loading pit, now the Northfield Memorial, on Tinian, Northern Marianas

“Film is an imaginary architecture in time,” says 66-year-old German filmmaker Heinz Emigholz. “Architecture is the most popular mode through which to express human life. With it you can show all possible breeds of human activity: love, hate, care, loss. You just have to look carefully.”

Emigholz is speaking about The Airstrip (2013), his most recent feature, the latest in a series of films devoted to architecture that took more than 20 years to make. The film begins with an offscreen female narrator (voiced by Natja Brunckhorst, once of Christiane F fame) suggesting the image of a bomb in flight and proposing an exploration of the time between its release and its landing. The viewer then takes an around-the-world trip, visiting architectural sites connected by the theme of how the human race keeps records of its past.

They include Western European structures preserved after the Second World War and buildings constructed in Latin American countries where Modernism migrated while Europe rebuilt itself, as well as depopulated former Pacific Theatre sites on the Northern Mariana Islands, where empty buildings stand alongside memorials commemorating the dropping of the atom bombs. 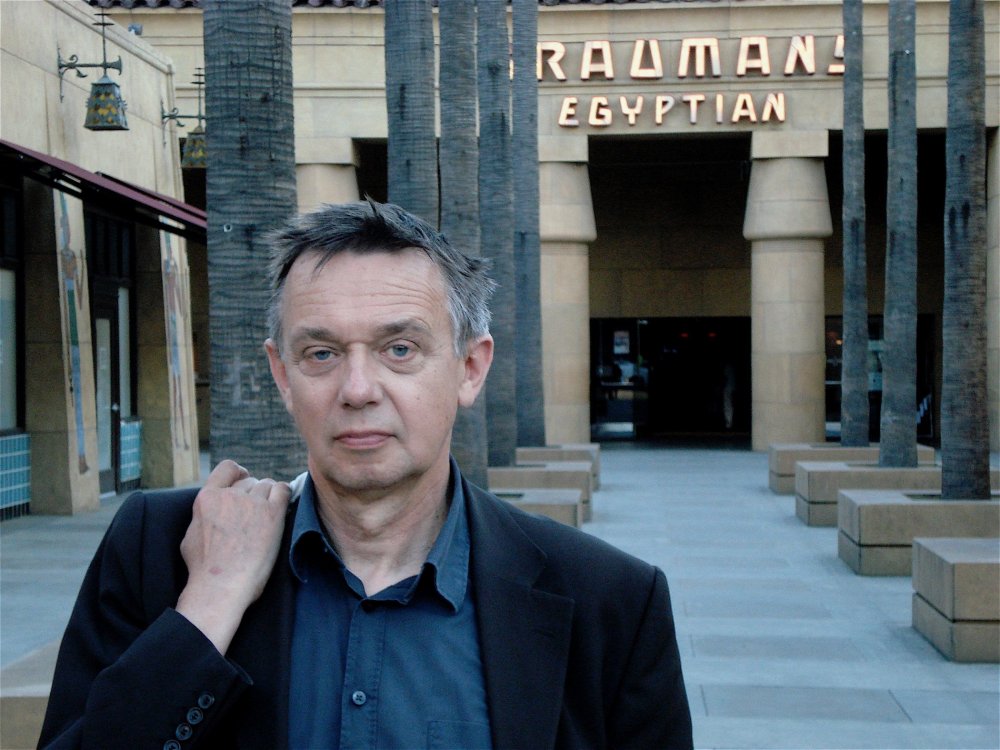 “I first grew interested in filmmaking as a way to work with little pieces of time, and to use time itself as material,” says Emigholz. The Airstrip examines present-day structures to see what traces remain of former times, an approach consistent with the director’s larger project of narrating the course of human lives through buildings. His architecture films proceed through simple sequences devoted to single buildings. Each such sequence starts with a title card stating basic information: the edifice’s name, architect, location, date of completion and date or dates of the filming.

Then, a progression of shots (often though not always fixed-frame) take us through the place. For instance, in Airstrip, a sequence devoted to a famed Buenos Aires shopping centre, the Mercado de Abasto (built by Slovenian architect Viktor Sulčič in 1934, and filmed by Emigholz on 28 March 2012), begins with overhead views of the Mercado’s cupola-filled roof set among the many rectangular high-rises that surround it. The editing takes us towards street level and closer to the mall’s entrance, until we are inside and observing the food court from a distance.

From there it’s on to the mall’s indoor amusement park, with calm observation of families at play. The shots are never presented straight-on, as in traditional architectural photography, but rather at tilted angles, in accordance with how Emigholz’s eyes settled on what interested him; and they’re connected through such objects as chandeliers, ceiling beams and Ferris-wheel cars that appear at first partially, then in full subsequently, as though the film were following those eyes.

Like in all his architecture films, Emigholz relies on natural lighting and ambient sound to depict a specific place at a specific time. His editing then presents the sequence shots as discrete parts of a building for the viewer to connect into a whole.

The interior of the Mercado de Abasto resounds with the echoes of people, mostly offscreen, but who appear sometimes as small figures moving inside a much larger frame. Whether or not humans are present in the shot, the viewer never forgets that the building exists pleasantly for everyday use.

Emigholz eventually moves back outside the Mercado, once again showing its circles and curves within a conflux of narrowly arranged streets and neighbouring towers. As with many of the buildings that Emigholz films in The Airstrip, we see how a site exists within its modern urban environment.

The Airstrip belongs to a larger series called Photography and Beyond, the initial idea behind which, says Emigholz, was to explore “the active work of design and projection – imaginings that have become real.” Each of the 22 (and counting) films in the series focuses (often wordlessly) upon pre-existing visual art by gazing at, moving through and contemplating works. The narrative of each Photography and Beyond film consists of the steps taken during the act of viewing an art object while the spectator’s eyes and mind shift in relation to it. The viewer’s sense of time changes as he or she holds his or her present moment in relation to past and future ones.

For this reason, says Emigholz, “you have to enter a certain mode of meditation to grasp the films,” which variously render sculptures, drawings, painting and other art forms in cinematic terms by flattening their surfaces while expanding their time element.

Many of Photography and Beyond’s films explore mortality through visits to architectural sites. The long feature Sense of Architecture (2006-2009) narrates an imagined human life’s stages using scenes of depopulated buildings in contemporary Austria, from kindergarten to columbarium. Each of the eight films in the series subset Architecture as Autobiography reconstructs a Modernist architect’s life by showing the present states of his buildings in the order in which they were built. The trilogy Decampment of Modernism (which The Airstrip concludes) examines sites formerly occupied by empires, colonial powers and dictatorships.

Photography and Beyond grew partly out of a fiction feature Emigholz wrote, produced and directed called The Holy Bunch (1991), which he calls a “testament to a lifestyle”. In the film, five bohemian friends gather to commemorate the loss of a recently deceased sixth. Their waking lives, flashbacks and fantasies play out across bridges and in front of buildings that include the Cologne Cathedral and Barcelona’s Sagrada Família. At times, people drop out of frame altogether while the buildings remain in view, with the camera surveying the doors and walls of these man-made structures as though they, too, were living houses of memory. 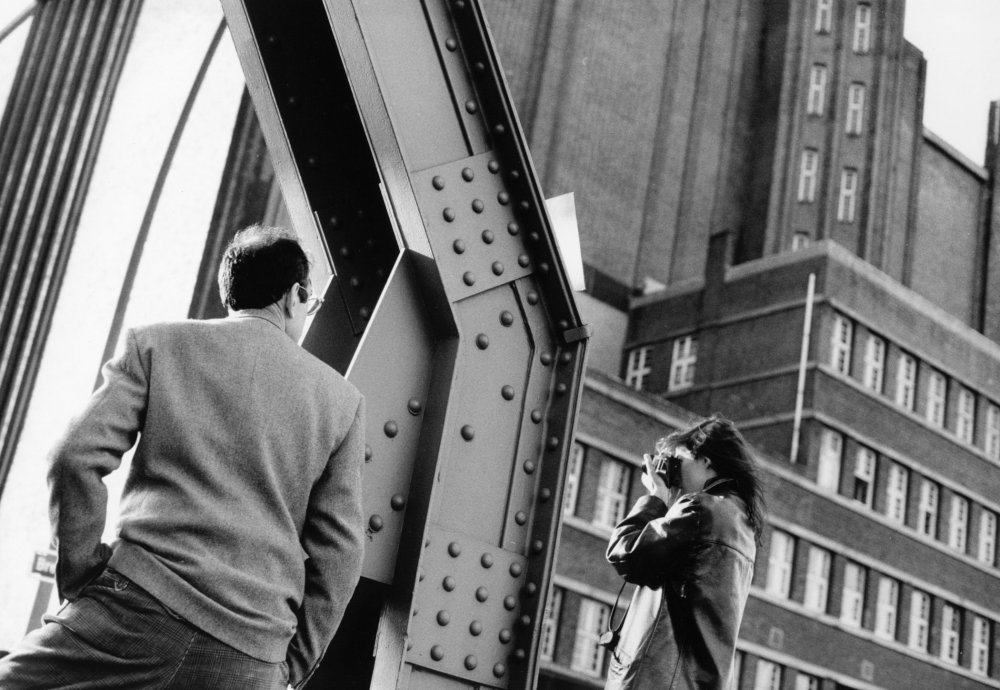 “I never believed that foreground should be reserved for actors and action and background for architecture and landscape,” says Emigholz, who had made other fiction films prior to The Holy Bunch. He argues that people reveal qualities of their environments and vice versa, insisting, “These spheres must be interwoven.”

After the financial failure of The Holy Bunch bankrupted him, Emigholz took supporting acting roles in other directors’ films to survive; at the same time, he considered how he could return to filmmaking without the financial restrictions imposed by using professional actors. In the decade that followed, Emigholz formed an idea for an essay film that would discuss the notion of ‘Second Nature’ (a Frankfurt School term for nature as designed by humans) with the work of several Modernist architects and civil engineers. 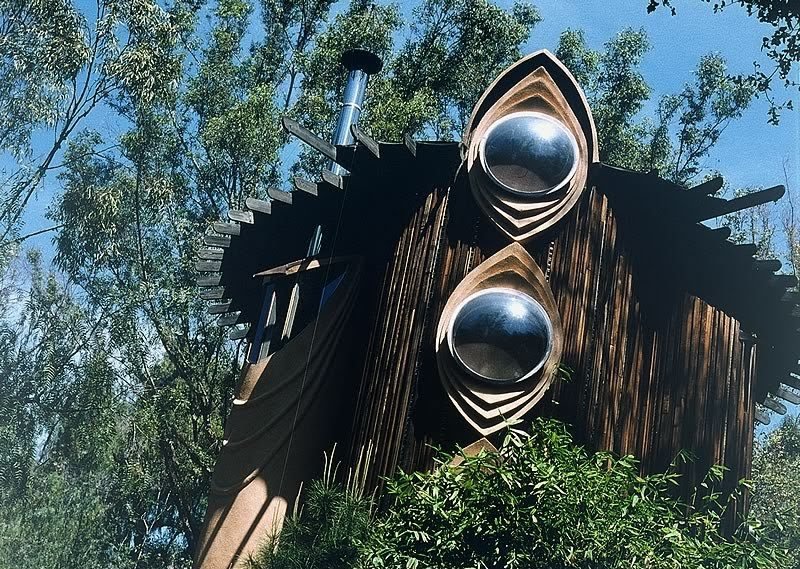 “My sense of time changed completely during this process,” says Emigholz, who slowed his practice down as he sought a form for his subject. He eventually realised that he had too much material for one film and broke the editing block with which he was working into several, creating a kind of film catalogue whose entries have multiplied over time. The builders whose work Emigholz has chronicled – primarily an octet of Americans and Western Europeans including Bruce Goff, Adolf Loos, Robert Maillart and Louis Sullivan – created living odes to adaptation. Their buildings, even when ornately decorated, offer structural designs of elegant simplicity and tranquil placement within their natural surroundings.

Emigholz follows the architects’ leads by building personalised cinematic spaces to house each of their edifices. In his films, buildings appear as both aesthetically unique and comfortable. The film Perret in France and Algeria (2012), for instance, presents former churches and government structures built by French architect Auguste Perret in what was then colonial Algeria within the casual modern flow of human traffic. 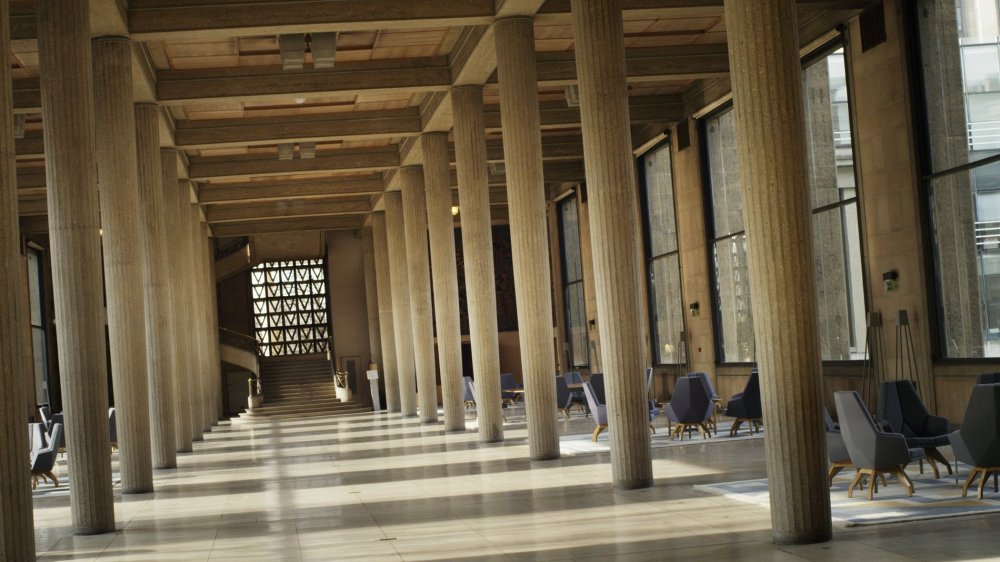 Other films show the buildings among the sights and sounds of their surrounding rich natural environments, and call attention to wind as it blows through trees. The edifices exist within registers of moments; Emigholz’s films offer a melancholy peace by depicting states of being that have changed before and will change again.

Though Emigholz intends to continue his film-architectural efforts, the Decampment of Modernism trilogy temporarily resolves them with a study of “the rise and fall of Modernism in time”. It consists of three films built upon time-based binaries as a way of showing what remains of Modernism. The first, Parabeton – Pier Luigi Nervi and Roman Concrete (2012), places buildings by the Italian Modernist ‘architect’s architect’ Nervi in relation to the extant ancient Roman temples and gathering places that inspired him. Perret in France and Algeria, the second, offers the buildings that Perret built during the first half of the twentieth century in the two countries alongside each other as a way of comparing how the nations have preserved their recent histories. 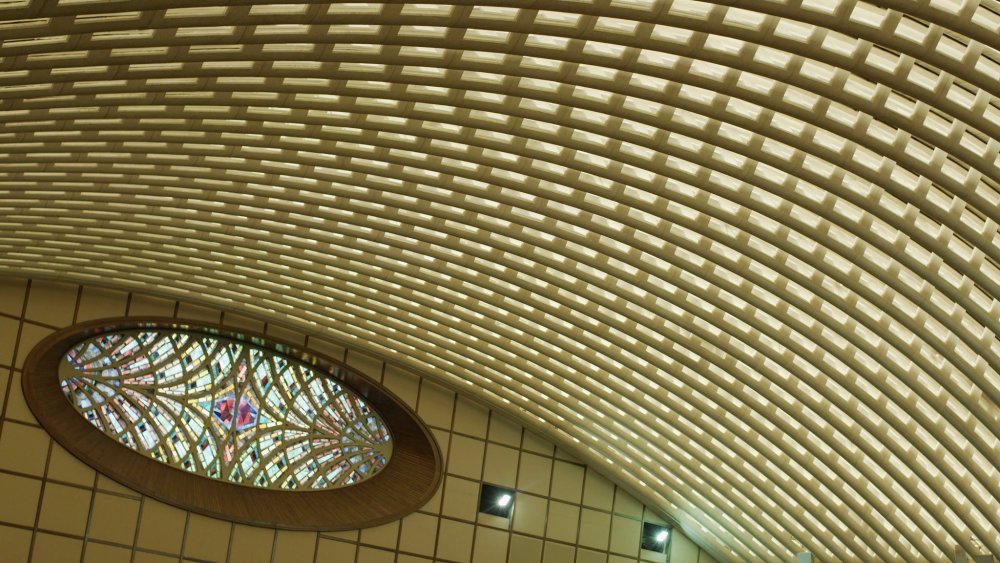 The Airstrip ranges wider than either of its predecessors, with Emigholz using his closing film to travel to disparate architects’ buildings across the globe that he had previously wanted to record. They are all placed in the service of an argument about developments in world architecture following the dropping of the atomic bomb, which Emigholz posits as having become an unfortunately popular model for urban renewal.

For one of the few times in his architecture films, here Emigholz employs voiceover commentary (from the aforementioned Brunckhorst), and his reasons for doing so are clear. The film shows Modernist monuments to harmony, by architects including Nervi and Sulčič, with mute, observant care; but whenever a symbol of world domination appears (including former war sites as well as Duty Free sections of airports), the narrator enters to talk it away.

She claims that, as a German, she owes her life to the bomb. At the same time, The Airstrip looks skeptically upon what German culture has done since its reprieve, with its buildings still showcasing fascist ideas. The personal touch of Emigholz’s preferred line of Modernism exists among current trends towards uniform skyscrapers as what the narrator calls the “scrapyard of architectonic utopia.”

This line makes reference to Emigholz’s childhood spent near a scrapyard for metals. Like many of his films, The Airstrip unfolds during a specific period of time. “At one point I thought that the atomic bombs’ concrete loading pits symbolised the end of architecture,” says the filmmaker, who is currently working towards completing additional Photography and Beyond films. “Of course, this is not true. The abyss is there, but we have to deny it in order to go on living. The bomb has been dropped, though it has not yet hit its target: that is the definition of a lifespan.”

Thanks to Olaf Möller for research help. More information can be found at the website of Emigholz’s production company, pym.de.