“Rescue isn’t the end of the story”: reclaiming selves and circus tricks in Even When I Fall

Sky Neal and Kate McLarnon’s deft portrait of Nepali women rebuilding their lives after childhoods trafficked into circus performance shows the complexities of rehabilitation from trauma – and the struggle for female self-determination, note the two directors and producer Elhum Shakerifar. 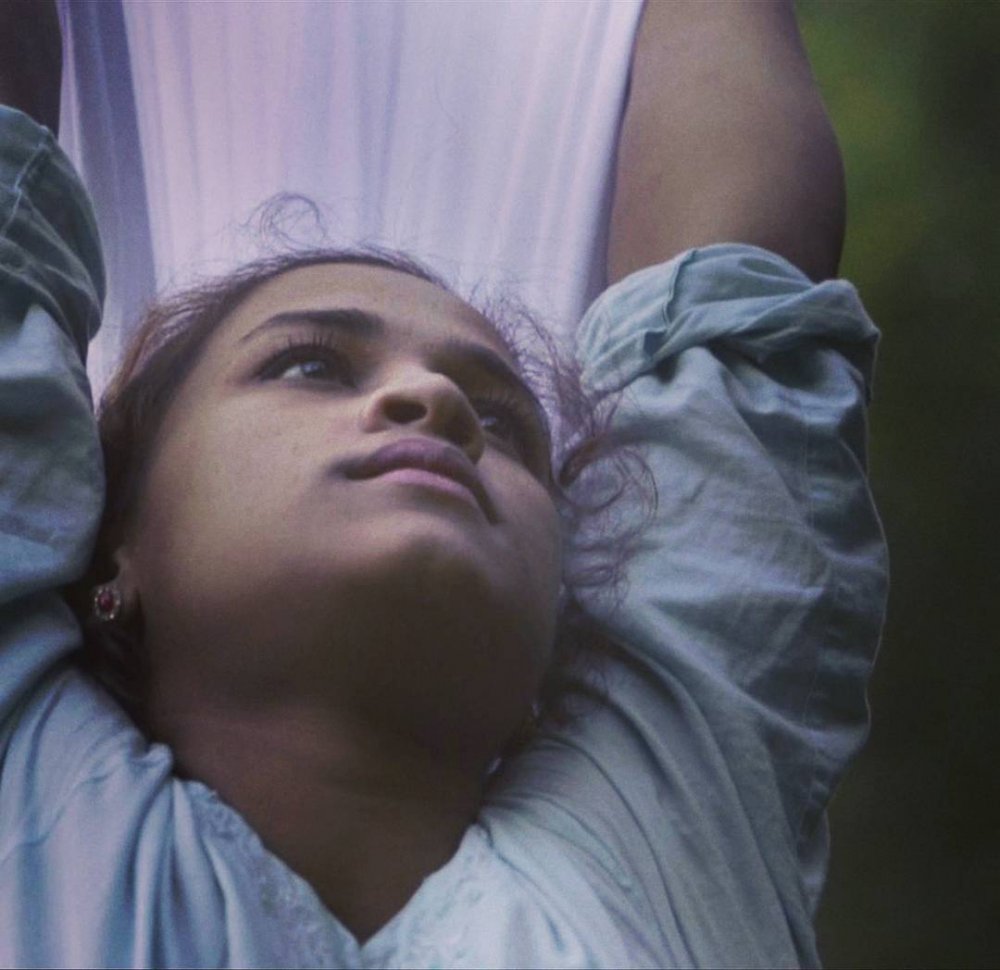 Sheetal in Even When I Fall

Even When I Fall is an extraordinarily nuanced and powerful documentary which combines character-driven filmmaking, social commentary and an exploration of the complexity of healing from trauma. Shot over six years, it tells the story of two Nepalese girls, Sheetal and Saraswoti, who are trafficked as children and eventually rescued from an Indian circus by an anti-trafficking NGO. The film documents their uneasy journey towards contentment, trust and independence and is not a triumphalist rags to riches tale but a moving study of progression in an imperfect world.

Even When I Fall is now on UK release and touring internationally.

I speak to Even When I Fall’s BAFTA-nominated producer, Elhum Shakerifar, and its co-directors Sky Neal and Kate McLarnon, who met years ago studying visual anthropology at Goldsmiths. Before watching the film, I tell them, I had had reservations about the ethics of the documentary and what might be seen as the colonial presumption of an all-Western, majority-white team with no Nepali language skills, heritage or expertise going east to find hard-luck stories of abused survivors battling against the odds. I was wary of a dehumanising us-and-them attitude, of shallow and patronising generalisations and the lingering whiff of white-saviour syndrome, of exploitation followed by abandonment.

McLarnon responds, “The ethical questions were at the front of our mind when making the film. We always wanted to work with them as collaboratively as possible. We were consulting them about what we should film: how should we tell your story? What is important for you for us to show?” Neal says, “They didn’t want to be portrayed as victims and we valued and honoured that.”

When I ask McLarnon how she gained an understanding of Nepali society she says, “Well, you know. Reading. Meeting a lot of people, seeking to learn. I’d never been to Nepal, I didn’t know much about Nepal, apart from the mountains and the old hippie trail – the things everyone knows. But it’s a fascinating country and I just took to it! It’s a very welcoming place, the people are very open and curious and willing to share.” 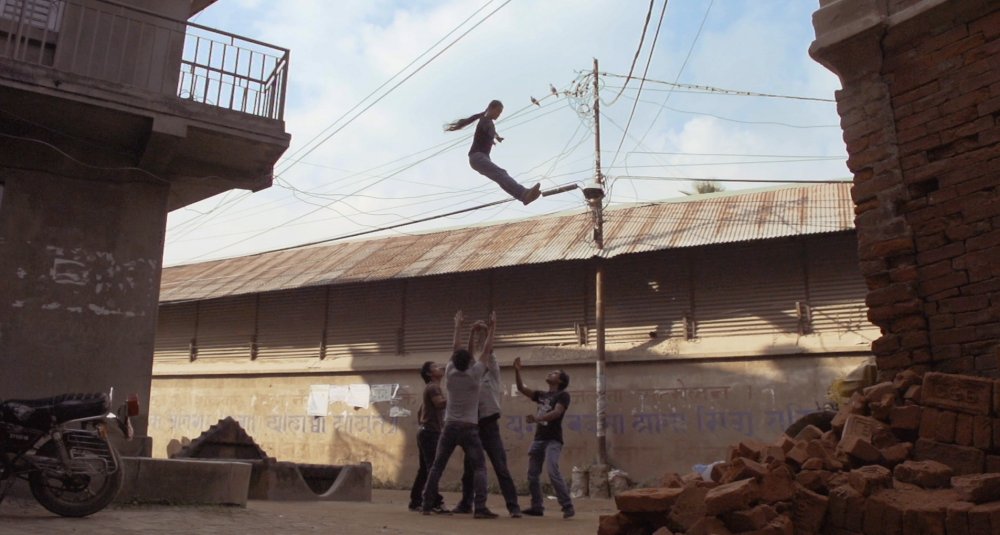 Even When I Fall’s insight into the aftermath of exploitation and abuse is sophisticated: all the survivors have known is the world of the circus and the camaraderie of other young people tricked into circus life. Uneducated, sceptical, stringently controlled throughout their lives and too young to remember their parents, even when rescued they do not have the practical or emotional skills to thrive in ‘freedom’. The only thing they have known is circus performance, and this is the springboard for a surprisingly counter-intuitive reclamation of independence and influence: the survivors form a new troupe, Circus Kathmandu, for formerly trafficked performers.

It was originally Neal who first came upon the story years ago while working on a rehabilitative programme with an NGO helping trafficked performers. Neal had experience in circus performance so she encountered Sheetal and Saraswoti as “young women who came from the same profession as me, albeit in a very different experience. I was able to say, ‘Look, there’s a whole industry round the world where you are celebrated and considered beautiful.’” 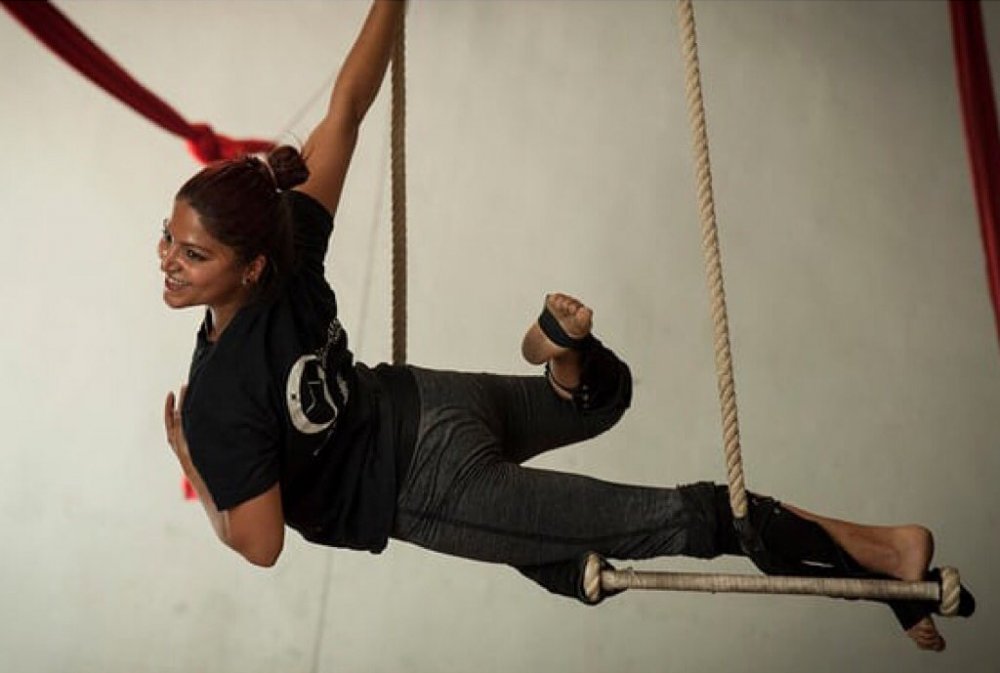 One of the most psychologically delicate aspects of the film is the way in which the practices inculcated in them by their traffickers are the route to the women’s eventual resurgence. McLarnon says, “We were fascinated by what happened to the women after they were rescued. It’s complicated, because rescue isn’t the end of the story.” In Circus Kathmandu the performers incorporate their stories into their shows as a way of “facing up to stigma and learning to become the storytellers, instead of society imposing a narrative on them.”

The young women and men in Even When I Fall go from being victims to survivors to activists, although their trajectory was interrupted by the Nepal earthquake of April 2015, when “a lot of that [momentum] was ripped away and the corporate gigs, the NGO gigs and Indian wedding parties just dried up, and at the same time trafficking spiked,” says McLarnon. “All the elements that lead to trafficking were exacerbated and the women’s experience started to turn full circle. They found themselves going back to the villages, starting to educate people, and at the same time they learned new skills as teachers, advocates and storytellers.”

Adds Shakerifar: “After the earthquake they lost their training space and the country’s resources went to emergency rehabilitation. But they also took control of their network. They went out and provided light relief, making people laugh, giving them something to do and also conveying a message because the earthquake exacerbated all the issues they were talking about in the first place.” 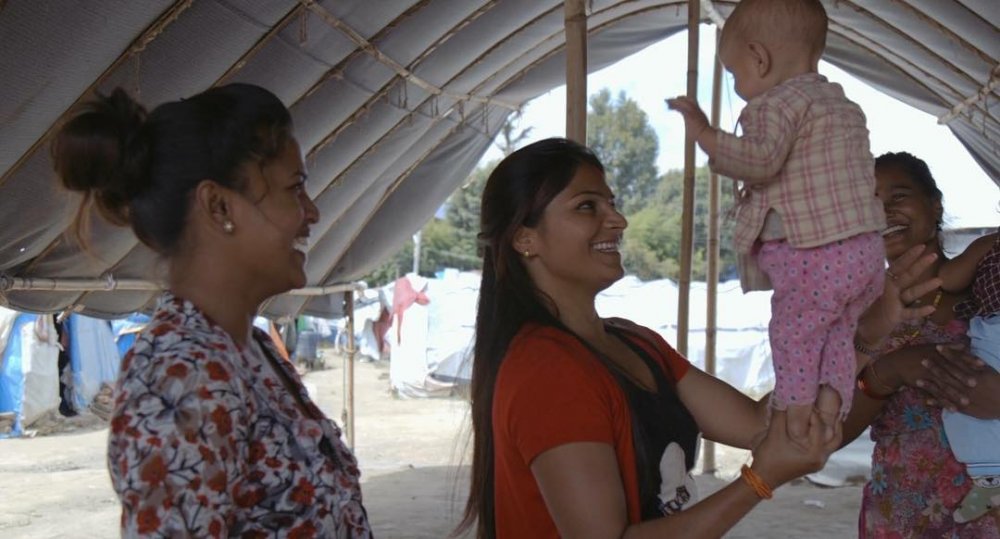 It is wonderful to watch a film in which so many women of all different personalities, ages, experiences and viewpoints talk, confess, debate, create and respond; the Nepali village women in particular are models of salty wisdom, humour and strength. The documentary overturns patronising stereotypes about South Asian women being cowed and silent, unaware and unintelligent about their own inequality. Yet it also carries a powerful universality, particularly in the girls’ confusion, yearning and betrayal when they confront their families and in all the women’s fight to be heard, gain healing and find closure, although justice itself seems far away.

McLarnon agrees: “People have been almost relieved and surprised to see a film with so many women in it being so strong and verbal. Their reality is complicated and unresolved – as our lives are, with many competing elements. The young women are in an environment where they’re still highly stigmatised. They make small inroads into changing things but [the stigma is] still there for any survivors. They’re still struggling for money, respect, support and acceptance of their work.”

Having completed the film, which launched on 13 April but has already enjoyed successful preview screenings across the country, the team behind it haven’t abandoned their subjects. They raised money from Comic Relief who will be funding Circus Kathmandu for the next two years, run by a mixed British and Nepali team partnering with an ethical recruitment agency.

Both for the filmmaking team and for their subjects, the route to survival – let alone success – has been a long one. Funding for the documentary was piecemeal, with pitches met with scepticism and ignorance until the BFI came on board in 2015, five years into the process.

Neal describes the BFI’s involvement as a “turning point that really enabled us to fulfil the feature potential of the film. Before then, it was never-ending how many things you had to keep producing to get in front of funders, how many times we were told, ‘Come back when you have a rough cut’, how we had to keep churning out different versions just to get to the next stage, the expectation that you can just go away and come back with a finished film. You’re expected to be the producer, the editor, the director, the camera operator, and do the funding applications. The positive side of it taking as long as it did was that we now have a coming of age story, we see these young girls develop into women. The story is stronger for the time it took.”

All three women speak powerfully about how the industry must acknowledge and respect women’s talent as well as accommodating filmmakers who are parents “instead of having to pretend it’s not happening,” as McLarnon says. “We should all be talking about this more. [As a mother] I never would have finished the film if I hadn’t had the support of understanding, strong women around me like Sky and Elhum. Supporting each other within the industry and as colleagues is really important.”

Shakerifar says, “The directors of Even When I Fall are two first-time female directors. Nobody is going to give them space unless we create it, and from an industry point of view it’s a hard sell: a documentary, in a foreign language, about women’s stories. But the [positive] audience reaction has validated that. Through storytelling, distribution and curation we can change the narrative, change what people want to see. People can change how the industry works.”

Related to “Rescue isn’t the end of the story”: reclaiming selves and circus tricks in Even When I Fall