The Illinois Parables: Deborah Stratman on her histories of the land

Artist and filmmaker Deborah Stratman uncovers 11 allegories of exodus in the oft-overlooked landscape of her Midwestern home state in The Illinois Parables. She talks about the politics of place and questions of film form with Erika Balsom. 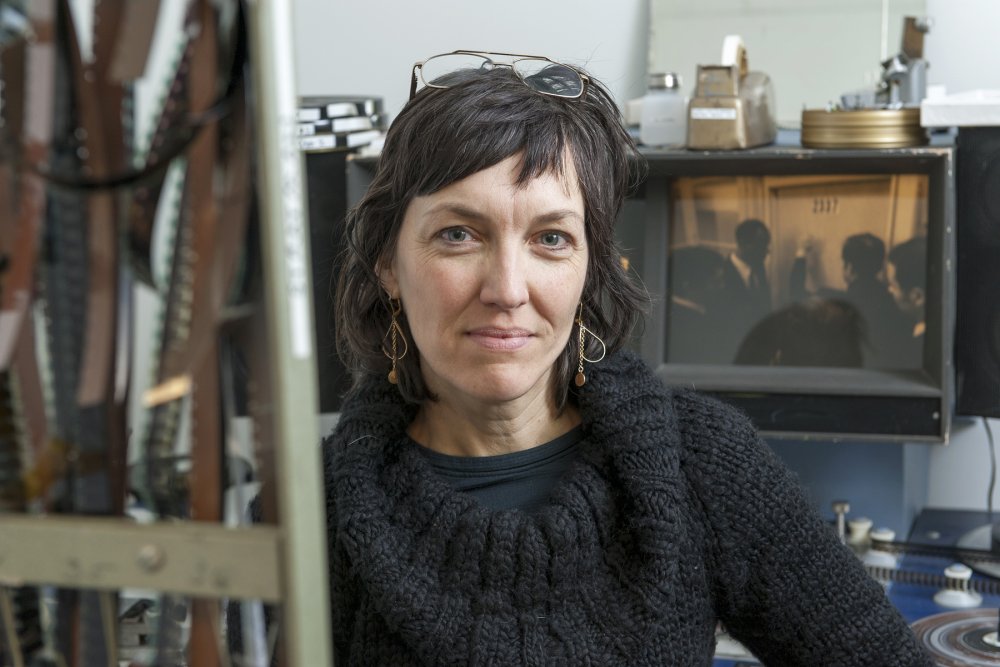 The Midwestern state of Illinois is the fifth most populous in the United States, but its identity in the popular imagination is marked by none of the grand mythology enjoyed by Texas or California. Yet as Deborah Stratman masterfully unfolds in her 16mm essay film The Illinois Parables, the unassuming landscapes of her home state contain rich, accumulated traces of struggle, displacement, hope and renewal. In 11 ‘parables’ spanning from 600 CE to 1985, Stratman marshals diverse filmic techniques to unearth a fragmentary history of how faith and belief, in their manifold manifestations, have shaped the territory and the experience of those who live within it. Through a concentration on the decidedly local, Stratman speaks to major themes and narratives of American identity, probing how particular archetypes are rearticulated and reshaped across time.

The Illinois Parables screens in Projections Program 3 at the New York Film Festival on 9 and 10 October, and as half of the Midwestern Parables programme in the Experimenta section of the London Film Festival, 10 October at the BFI Southbank.

Stratman works at the intersection of documentary and artists’ film, combining commitments to actuality and history with poetic rigour and formal experimentation. Her 2009 festival hit O’er the Land took its title from the American national anthem and examined the purchase of patriotism and manifest destiny in an era of ambient fear.

Like that earlier film, The Illinois Parables often uses static wide shots to approach landscapes with a quiet urgency that calls upon the viewer to connect, juxtapose and extrapolate. These images are joined by reproductions of archival documents, evocative uses of sound and numerous voiceovers to create a polyvocal film that insists on multiple ways of telling and knowing. In what is surely one of the year’s best documentaries, Stratman takes us from earthen mounds to commemorative plaques, from newspaper reports of tornadoes to re-enactments of Cointelpro operations against black nationalists – all as part of a compelling meditation on the politics of place and the difficulties of belonging.

What was your starting point for The Illinois Parables?

In a sense, it started from O’er the Land, for which I was considering narratives around freedom. Religious freedom was going to be one of them, but then I realised that freedom was unwieldy enough of a concept without introducing faith as well. 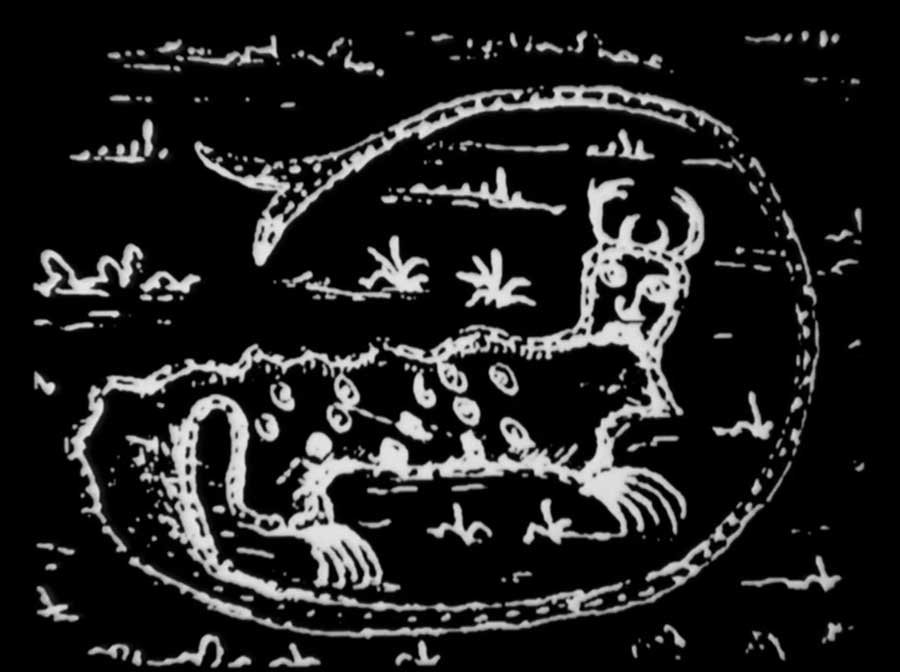 Around the same time, an artist friend of mine, Kate Brown, casually said, “I’d like to get 50 people each to make a film about a state.” I immediately thought that Illinois would be a tough one.

Why would Illinois be particularly tough?

I think it was psychologically tough, because I’m from there. But in a general sense, it’s not a sexy state. People confuse Iowa, Illinois and Indiana all the time. It’s the ‘middle section’. It’s one of the parts of the country that outsiders – and even insiders – don’t really think about. If people are trying to paint a general picture of the United States, you hear a lot about the coasts. You hear narratives that are tied to impressive landscapes, and Illinois is so flat. It’s an easy state to overlook.

But once I started reading about unusual histories in the state, I got into the idea that these stories could be hyper-local and specific in a political way, that they could speak to real events and real oppression, but that they could also be completely allegorical. Anybody can relate to a story of exodus – it doesn’t matter where you’re from.

This comes through in the idea of the parable that we find in the film’s title. A parable is an allegory or simple story that teaches a general lesson or exemplifies a greater principle. What are the lessons of The Illinois Parables?

That’s for my viewers to figure out! I don’t have a singular idea of what I hope the viewer will learn. I don’t think the effect of the parables is an additive sum; it’s more a multiplicative product. There’s a process of computing that goes on when you have these stories in proximity to one another. You start thinking about certain habits of culture and how they produce or echo one another. 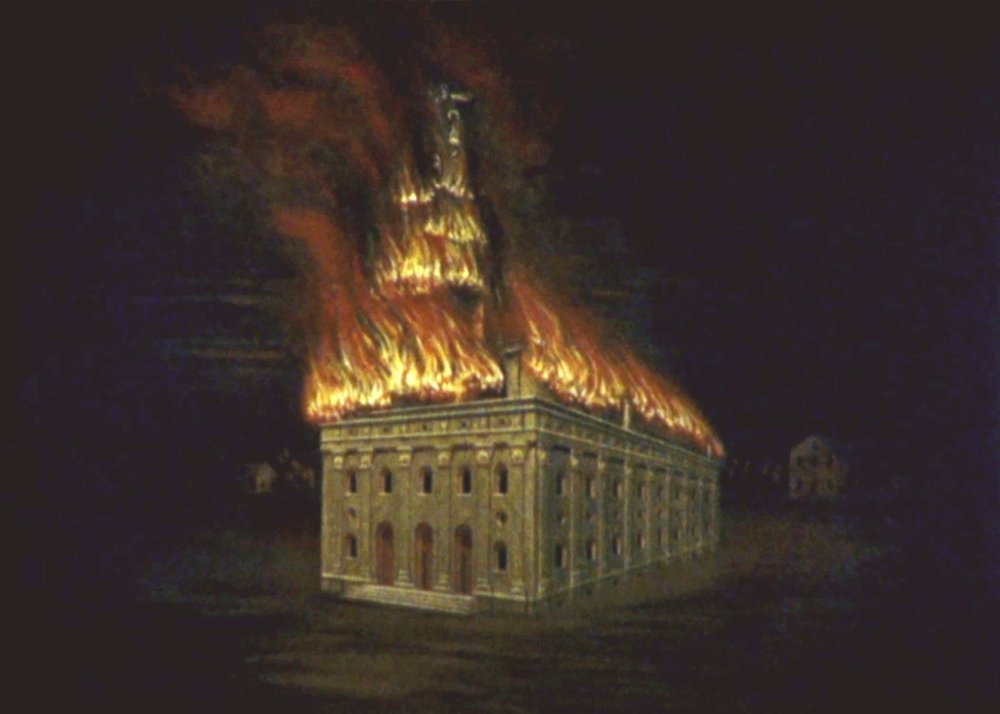 In the first parable, you have an African-American man named Ravenwolf who describes himself as a shaman. He stands in front of Monks Mound, constructed by Native Americans between 600 and 1400 CE. It’s a really interesting intersection of two different marginalised communities at two different moments in the history of the state.

That happens a number of times in the film, where a marginalised community or person wears the mantle of a previous story.

I didn’t know Ravenwolf. I was at Cahokia because I wanted to visit the mounds and he just walked into the shot. It was an amazing gift.

Later, the Icarians – a socialist utopian community from the mid-nineteenth century – move into the town the Mormons had been pushed out of. This is a standard American story, a marginalised group looking for something better. But its telling doesn’t have to involve language: the mounds, the scouring of the tornado or the Trail of Tears are geographical or physical modes of telling.

They’re inscriptions in the landscape.

Yes, exactly. It’s not just about writing or the stories we choose to tell, but about the way in which certain forms in the landscape mirror each other. I guess that’s history: repetition.

Landscape definitely seems to be an important means of accessing history in your work. I wonder how you would situate yourself within a broader tradition of landscape filmmaking. For instance, your work has both similarities and differences with the films of someone like James Benning.

Benning was definitely an influence. He was one of my professors in graduate school and I’m sure that I’m infused with some kind of Benning agenda, whether I want to be or not. 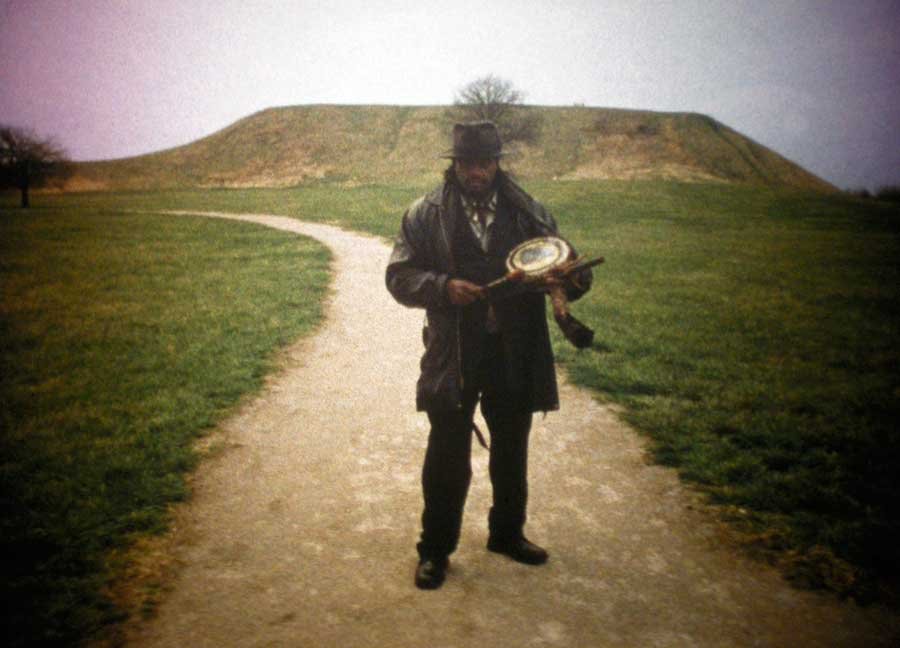 I love infrastructure, and I love the way that stories can be hidden or embedded in places without the landscape necessarily giving them up. I like that landscape is coy, but seductive as well. I love pilgrimage, and going to see what it feels like to be in different places. I like how Simon Schama, Rebecca Solnit and John McPhee write at the intersection of geography and history.

I’m interested in how the landscape can contain a politics. It contains anything, can hold everything – maybe that’s why it’s so important to me.

I also like land art. Even though I know it’s not always the case, I like that it can operate outside the market. Experiencing the work means taking the time and being intrepid enough to get there.

You decided to shoot this project on 16mm film after making a number of works in recent years on video. The film very emphatically proclaims the texture of 16mm.

For these more essayistic films that take me a while to make, film seems better suited because it’s a slower process so it feels closer to the speed at which I think, which is really slowly. This film took a lot of time.

I probably shot the first images ten or 11 years ago, but I had no idea they were for this film. I just knew they would be for something. About three years ago, it really started to gel – but that’s still a fairly long time. 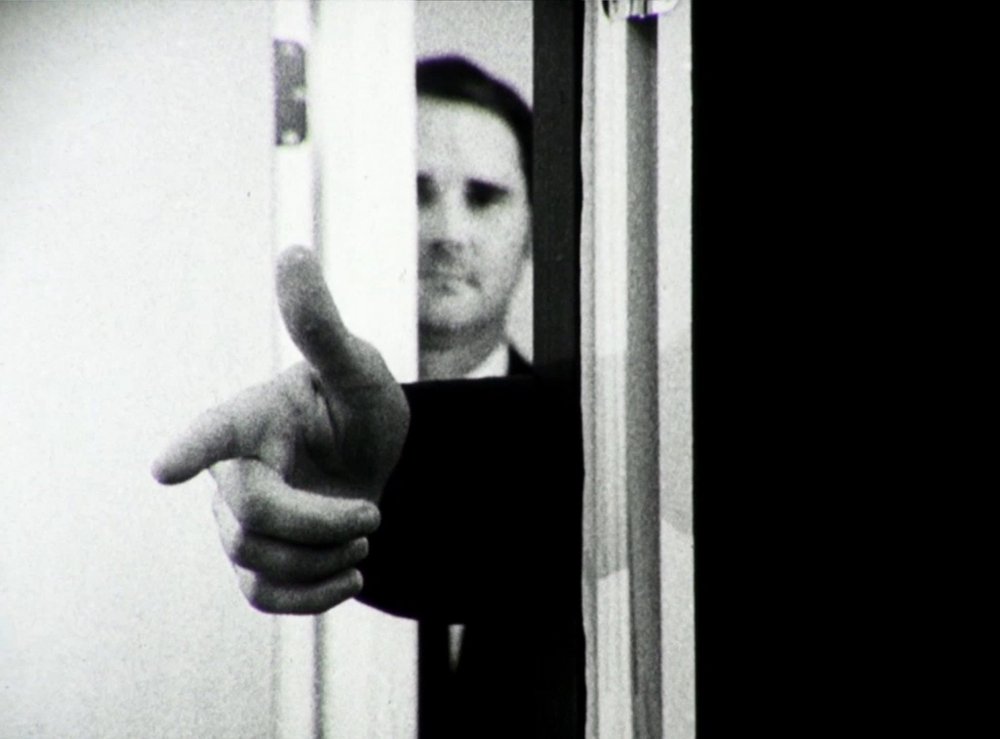 For me, 16mm works well for a strategic, measured gaze. Nothing in this film is handheld, unless you count the hot-air-balloon shot at the end. It is deliberate and contemplative.

Some people wonder if I used 16mm because it’s a historical film and the images are supposed to feel out of time. I wasn’t consciously thinking that. It has to do more with the way celluloid acts as a witness. It’s the light from that place, at that time, physically hitting and altering the film. There is a tactility of witnessing that is phenomenologically different than video.

But I work in 16mm and digital. I’ll use the medium that fits the speed and conditions of the topic.

Your work is situated at the intersection of documentary and experimental film. Do you feel like it’s received differently across these two contexts, if it’s even fair to speak of them as separate?

My work is definitely a challenge for programmers who are looking for more traditional docs, where characters and places are very clearly introduced. I’ve never been into that, personally. I like for the viewer to land in a place and then have to do some problem-solving. It’s not exactly documentary, but I usually end up calling it documentary because for most people ‘experimental film’ means that it’s going to be hand-painted or abstract. Though maybe that’s beginning to change. I wish we could just say ‘film’. 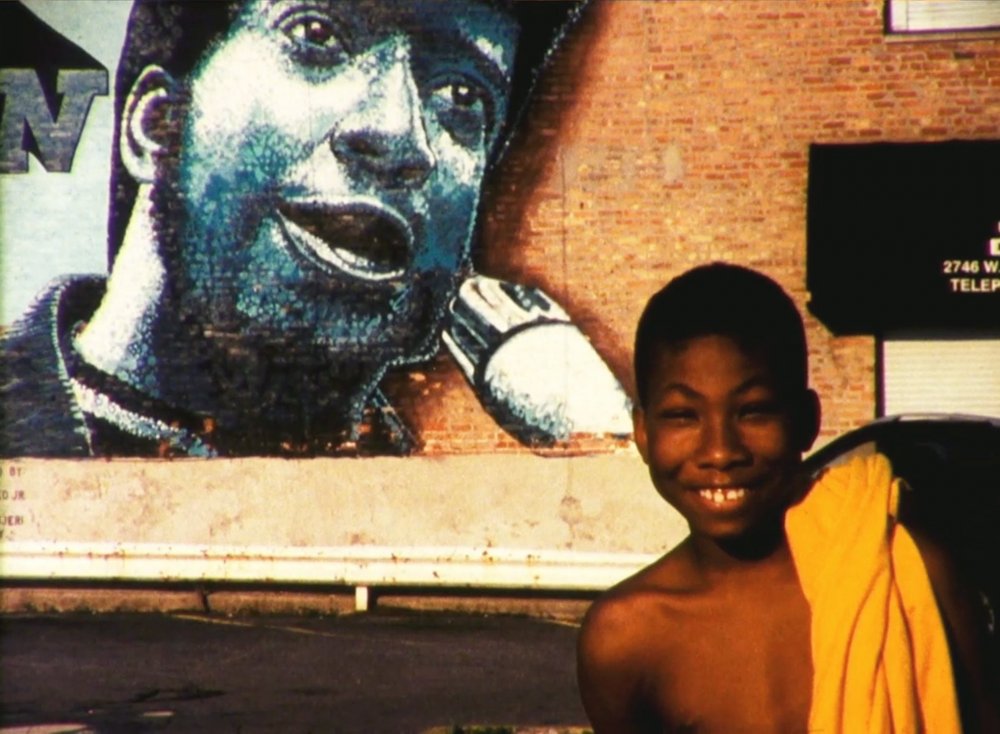 It’s exciting for me to make work in which different genre conceits rub up against each other. In The Illinois Parables, there are many different modes of telling: reenactment, maps, text, voiceover, sound. I don’t know what you would call it. It’s not schizophrenic cinema. Maybe we could call it a genre tessellation? You should ask the programmers.

I think they call it an essay film in the festival programme.

I guess that’s the umbrella term for anything that asks you to contemplate things a little, or to put together a thesis on your own as a viewer. Although some essay films build the thesis for you, so I don’t know.

The last parable we encounter is from 1985. It’s Michael Heizer’s Effigy Tumuli, a massive piece of land art that was part of an attempt to reclaim land stripped by coal mining. Its form recalls the other mounds we see throughout the film, but the circumstances of its production are very different. Could you speak a little about your decision to end with this work?

I went through many different permutations to order the 11 parables, but in the end I fell back on chronology and this was the most recent of the stories. But for me it’s useful that the last parable focuses on an artist’s practice and asks how it leaves an impression on history. It asks what artists do as re-writers of experience. That’s the version of belief or spirituality that I can get behind the most.

Related to The Illinois Parables: Deborah Stratman on her histories of the land