This is Afghanistan: Tim Hetherington on filming Restrepo

The latest of a series of impressive documentaries about the West’s military campaigns in the East, Restrepo is a soldier’s-eye portrait of the war in Afghanistan that won this year’s Sundance Grand Jury Prize. Tom Dawson speaks to its co-director, photo-journalist Tim Hetherington. 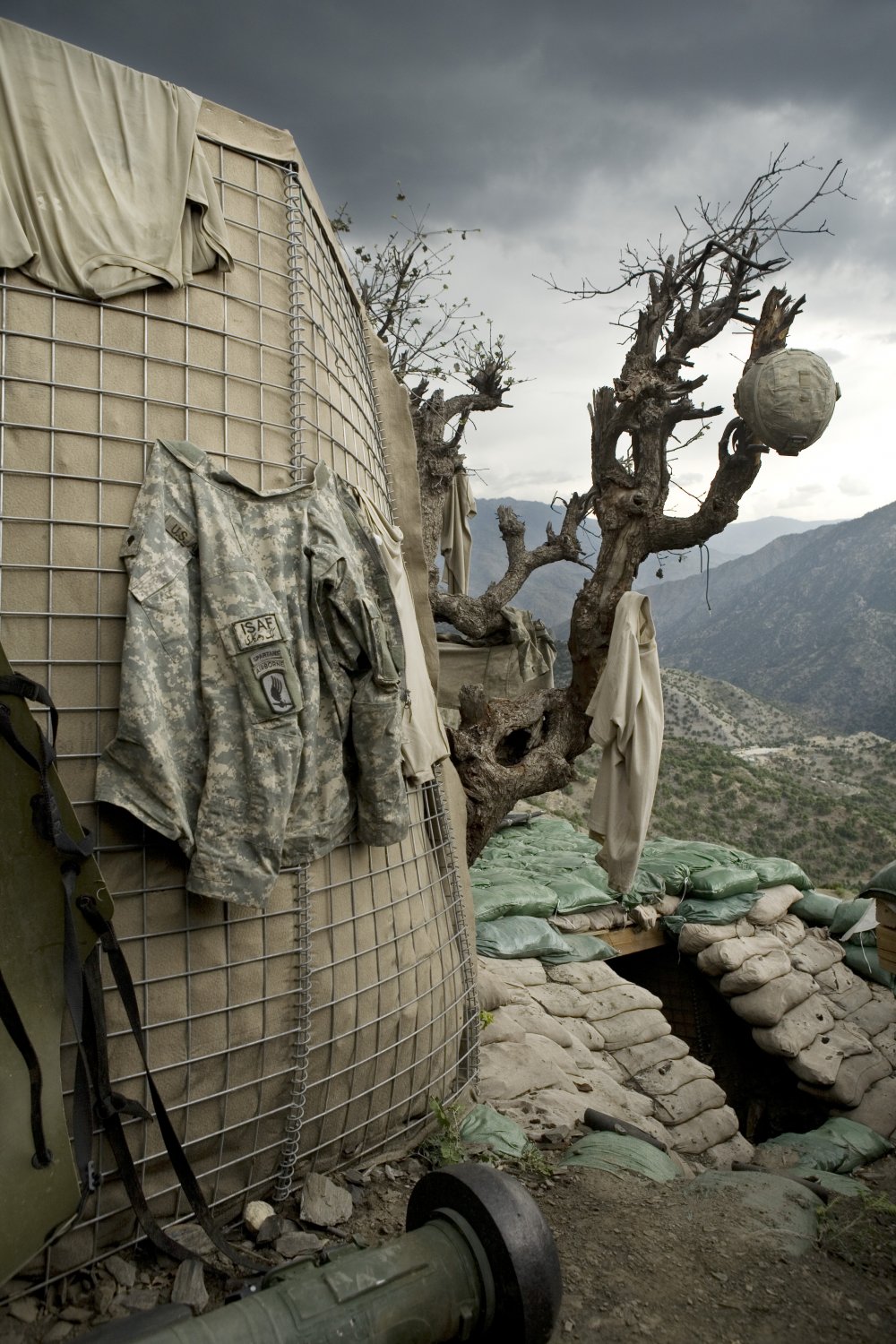 While promoting The Hurt Locker, director Kathryn Bigelow repeatedly avowed her belief in the experiential power of cinema – the medium’s ability to provide an immersive, you-are-there experience of a faraway environment.

Restrepo is reviewed by Guy Westwell in our November 2010 issue.

Her ideology seems to be shared by the co-directors of Restrepo, a new documentary about the Afghanistan war that offers a impressively intimate record of the realities of front-line combat against a guerrilla enemy. Over 15 months between 2007 and 2008, the American writer Sebastian Junger (best known for his book The Perfect Storm) and British photographer Tim Hetherington were embedded with a platoon of US soldiers from the 173rd Airborne Brigade in the Korengal Valley in eastern Afghanistan, near the border with Pakistan – a region notorious for its concentration of Taliban fighters.

“Initially we thought we’d do a couple of dispatches for Vanity Fair, who’d paid for us to go to the Korengal, and I’d do some video reports for ABC’s Nightline,” says the New York-based Hetherington (speaking on a brief London stopover en route to another stint in Afghanistan), explaining how the film grew organically out of their journalistic assignments. “But when we got there we found this extraordinary situation. At the time, the world was focussed on Iraq, and people didn’t understand how far the war in Afghanistan had slipped out of control. Suddenly there was a spike in the fighting, and we began to develop this really profound bond with the soldiers.” 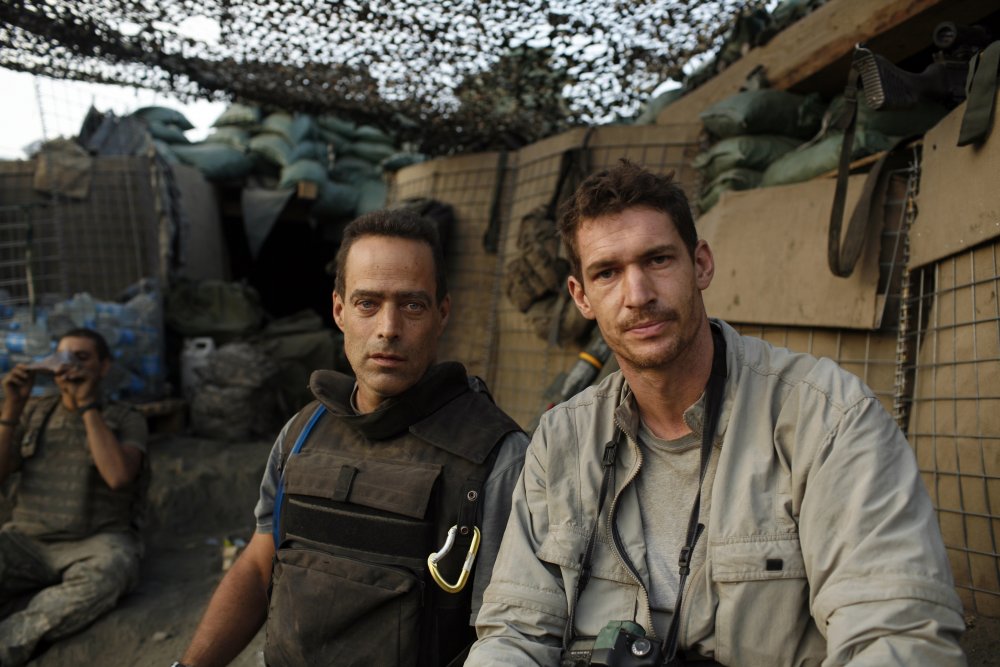 From the outset Hetherington and Junger decided that they would attempt to shoot their film – named after a mountain outpost in turn dedicated to a fallen US medic from the platoon – as far as possible within the confines of the treacherous Korengal terrain.

“We didn’t want to break the illusion that the viewer is in the valley themselves,” he says. ”That’s why we didn’t go home with the soldiers and meet their families in America. That’s why we didn’t interview any generals or strategists or show the wider political issues, because the men themselves didn’t have a wider picture of the war.”

Between them, Hetherington and Junger shot some 150 hours of footage, much of it in exceptionally difficult circumstances. From the nearest base it took two hours to trek through the mountains to the Restrepo outpost, which came under frequent Taliban attack. Initially the camp had no running water, electricity or hot food. Hetherington, who lived behind enemy lines during his reporting on the Liberian civil war, sounds phlegmatic about the dangers.

“Obviously it’s tough being shot at while filming, but it’s tough getting close to your subjects,” he says. “It’s like any journalistic story: the longer you spend on it, the better you get to know it. I think what gives the film its power is its intimacy with the soldiers. As an image-maker I became much more interested in the interrelationships between the soldiers and my own relationship to the soldiers than I was in the fighting.” 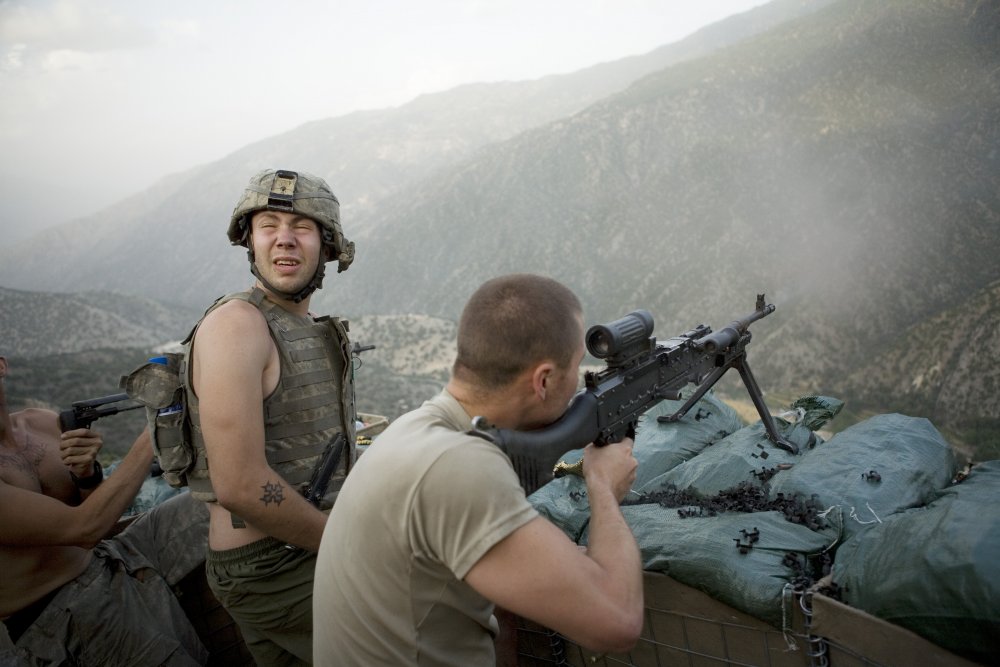 Though Restrepo foregoes voiceover, it does add interviews with the surviving men, filmed in Vicenza in Italy after the end of their deployment. Framed in close-up against a black backdrop, the young combatants attempt to process their experiences. What’s moving is their inability to find the words which can adequately express what they’ve endured.

“By the time we did those interviews in Italy,” says Hetherington, “it was about three months after they had finished fighting, which is the time it takes for the symptoms of PTSD [post-traumatic stress disorder] to emerge fully. They didn’t see us as authority figures or family members to whom it’s difficult to describe these events. We’d lived with them and they really opened up to us, which makes the Italy material some of the most compelling in the film.”

So how hard was it to shape such a mass of material into a coherent 90-minute documentary, given that neither director had any formal training in filmmaking?

“We had a brilliant editor, Michael Levine, who’d edited Billy the Kid and My Kid Could Paint That”, replies Hetherington. “He found the bits at the edges of interviews, where the camera holds on people’s expressions after they have stopped talking. He also emphasised the chaotic and disorientating nature of the fighting sequences. The key principle we had in editing this film was whether the material felt true to our experiences in that deployment, true to how we felt.” 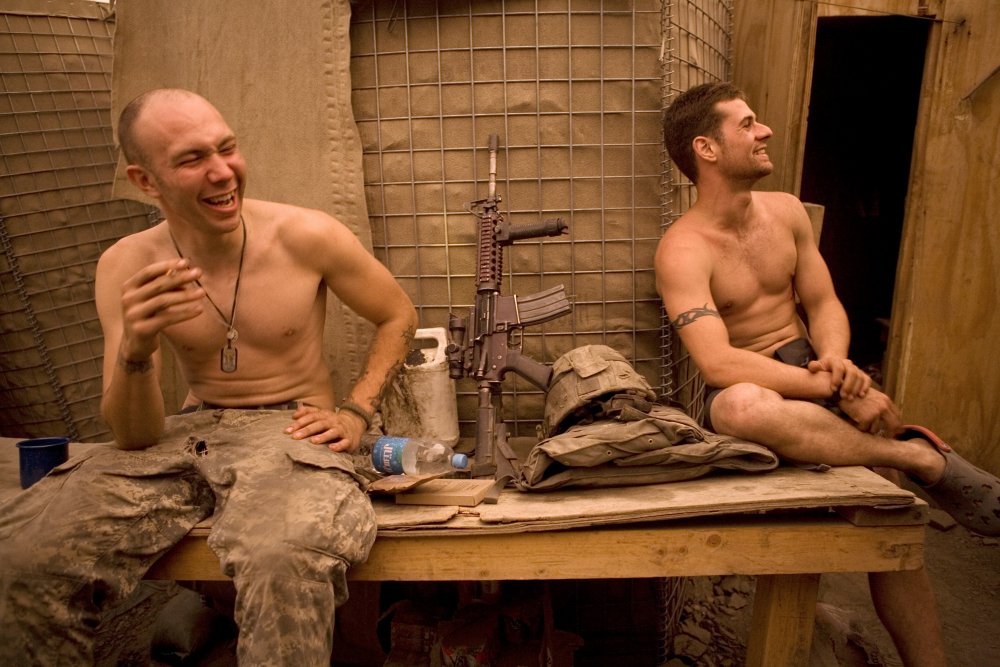 Whilst winning the Grand Jury Prize at Sundance in 2010 and enjoying a successful theatrical release in the States, Restrepo has been criticised for its supposedly apolitical stance. A review in the trade journal Variety noted the film’s lack of interrogation of the reasons for US military involvement in Afghanistan, and avoidance of comparisons to the Vietnam war.

Yet the film shows the ongoing failure of the occupying forces to win over the ‘hearts and minds’ of the Afghan population. We witness the bodies of civilian women and children killed in an air strike. “Show me which one is Taliban,” cries a local. At the weekly shura (consultation), Captain Kearney’s efforts to engage with the local elders – he promises development projects and healthcare if they join the government – make scant headway.

“I’ve been criticised by people on the hard Left, who call you a coward unless you morally condemn the war”, says Hetherington. “Meanwhile people on the Right have complained that I’m being unpatriotic and putting men’s lives at risk. I believe that in a desire to sanitise war our culture has dehumanised it. We’ve turned soldiers into symbols of our political beliefs: either they join the army out of economic necessity, or out of patriotic duty. In truth it’s a mixture of both. The point is they are fighting in Afghanistan out of our taxpayers’ money and will have to be reintegrated into society. Whether you are interested in peace-building in Afghanistan or extending the war, understanding soldiers’ experiences and motivations is important information to shape your strategy.

“In depicting war and the war machine,” he continues, “the mainstream media uses images of hardware – missiles, helicopters, tanks. These are the stereotypes through which we navigate the world of war. I think some people get angry with Restrepo because it doesn’t fulfill their expectations and it doesn’t present soldiers as two-dimensional idiots.”