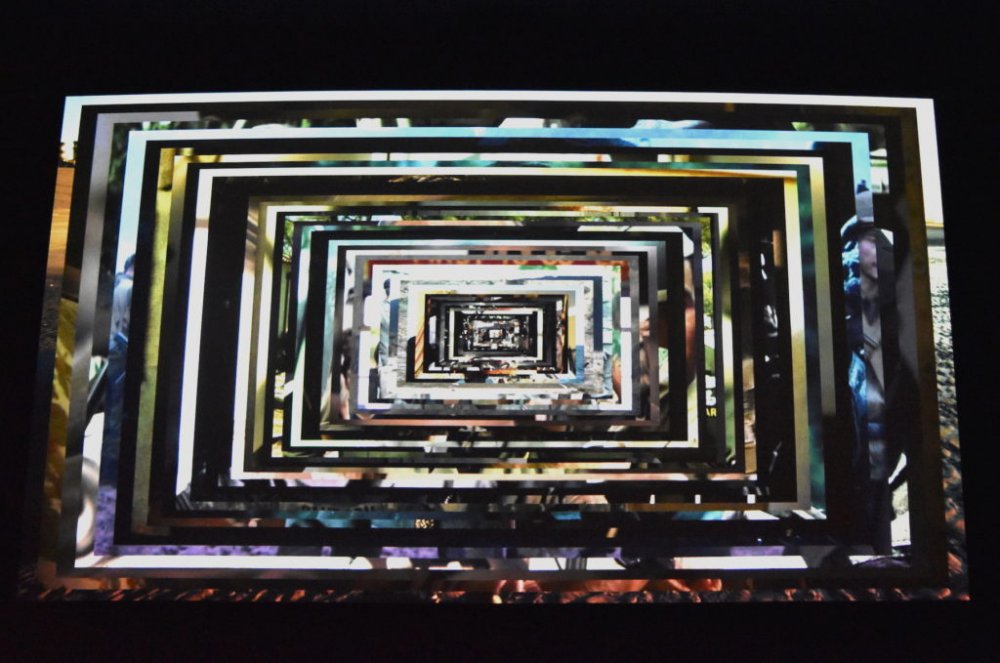 Every two years, international visual art comes together in Venice under the banner of the Biennale. This year’s edition, the 58th, has been curated by Ralph Rugoff, director of London’s Hayward Gallery and the first UK-based person to be given this role.

He describes the exhibition he has put together as having a split personality, in that it is both playful and deeply serious. Its title is May You Live in Interesting Times – a phrase with various histories and connotations ranging from an ancient Chinese curse to Greek philosophers, American politicians and British authors. The urban dictionary gives two definitions of ‘interesting’ – either arousing no interest at all, or an expression of indifference.

Taking this as its thematic framework, the exhibition encourages artists and visitors to reflect on the poignancy of interesting, for better or for worse. It assumes a contemporary relevance by pointing to the dangers of uncertainty in the world, which can be counter-balanced by creativity and innovation; and by acknowledging that we actually understand very little about human existence or the natural world. We are mere mortals. 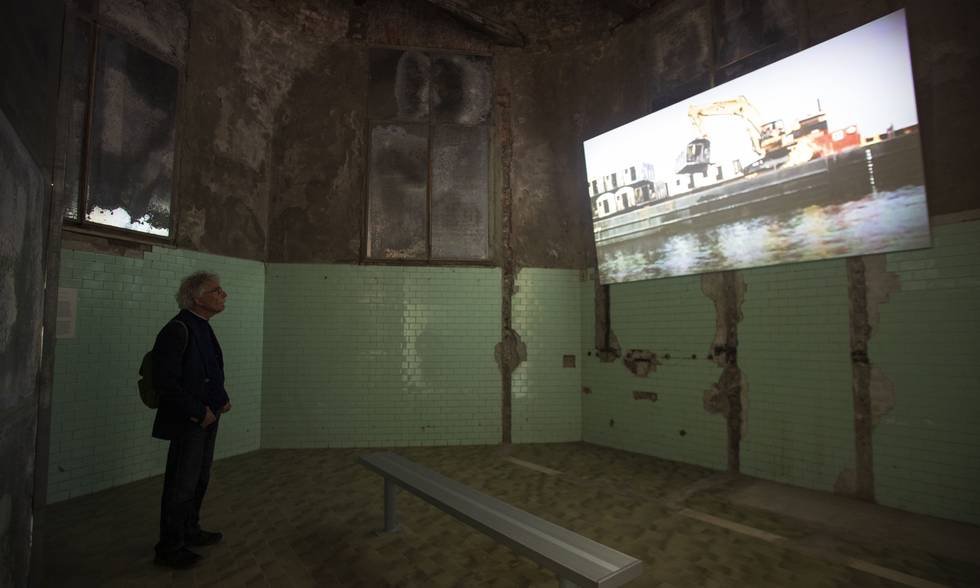 Ocean II Ocean, by Cyprien Gaillard, is a 12-minute, single-channel video shown on a continuous loop. It is installed in the middle of the ground floor of a lighthouse (Arsenale Tower) with a long communal bench in front that while it feels stark in the surroundings of a dirt floor and stone walls, allows you to be fully immersed. The Biennale synopsis refers to it as a “visual archaeology of decay… that fights the romanticism of ruins”.

You start out following subway routes made up of footage from Moscow and New York transit systems, zooming in on a lot of detail around doors and signage. Soon after, you are leaving the city and on a boat that takes you out of town and into the outskirts of the Atlantic. You then see a freighter full of abandoned subway cars that are being lifted by a crane and dropped into the sea.

Next you’re underwater following a defunct railcar down, down, down. As it hits the seafloor, it disrupts its environment and lays to rest in permanent incongruity. Over time, marine life settle in and take over, oblivious to the rules of mechanics and schedules of its former use and of the advertising campaigns that purvey in anachronistic obscurity. The doors are permanently ajar. A shark seems particularly curious by its presence but unfazed by its ruinous industrial parts, and remains un-menacing without any human specimen within. Accompanied by steel drums, the camera is an invisible subaqueous documentarian.

Water in Gaillard’s work is ex machina in the sense that nature is stronger than the machine and wins in the end because of its perpetual self-renewal. Yet, it inevitably suffers from human invasion. In this time of climate change and unsustainable exploitation of the natural world, we need to accept responsibility for our actions and attempt to reverse their detrimental impact on the environment.

In keeping with the Biennale’s theme, our propensity to anthropomorphise nature is being used to shift the blame from our complicity to the riotous disposition of the natural world. We are in denial about reality by hiding the truth; hence the sunken subways as a way of burying waste. Out of sight, out of mind is not a commitment to net zero. It is inspiring to see how the sea adapts, plus funny in the way Gaillard depicts the scenario, but we know how ruinous human detritus can be. The setting of the lighthouse is hauntingly apt: the ultimate place of surveillance over nature but also one of isolation and exposure to the constant taunt of force majeure.

Four colour woodcuts by Christian Marclay – Scream – decorate the walls of a room with a concrete and barbed wire wall as well as a giant glass room with blood being mechanically splattered everywhere and then cleaned up with a robotic squeegee. I felt queasy and uneasy to the point that I had to leave the building for some fresh air.

On the way out, I walked through an unsettling but also serene hallway of bright white lights by techno artist Ryoji Ikeda, simulating complete emptiness and a blinding blizzard. I caught my breath walking over to the Arsenale, then launched into more art – looking for more Marclay as his main piece was to be found there: 48 War Movies, a cinematic collage of war scenes from 48 films, boxed up and superimposed over each other to reveal only frames of each picture.

It is an aesthetically striking digital montage, juxtaposed with a cacophony of fighting battle scenes. Although depicting combat, the atmosphere is reminiscent of a fun fair where machinery clangs, conversations merge and emotions are rendered palpable through voices and movement. If it weren’t so harmoniously constructed, its centrifugal force could be unbearable.

As in war, the settings can be beautiful even if the situation is horrific. The piece is both frenetic and euphoric. The maze motif reflects on how people try to make sense out of patterns and use shortcuts that can also lead to systemic errors, especially in matters of life and death and making moral judgements during wartime.

With no beginning or end, nor top or bottom, the films become like a never-ending Russian doll or an infinite mirror. They are square in shape but circular in meaning, much like historiography that allows mistakes to be repeated. The more you watch them, the more abstract they become. Out of the noise and movement a narrative forms without any concrete dialogue: a signature trait of Marclay’s onomatopoeic art lexicon.

Ex Futura – Hito Steyerl’s This Is the Future 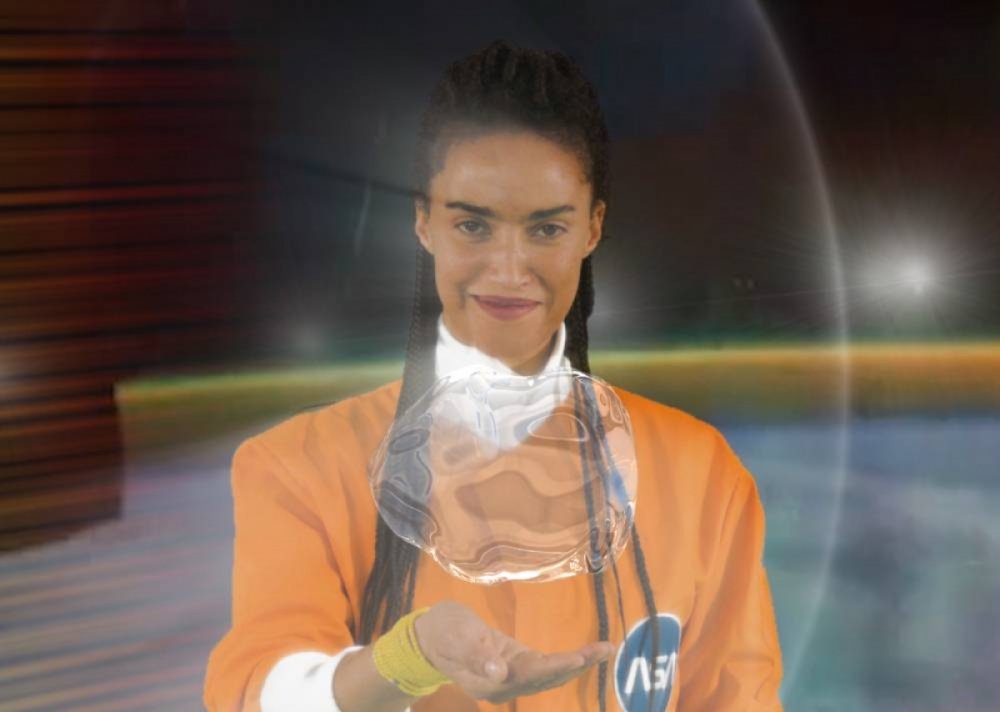 German artist Hito Steyerl’s installation This Is the Future sounds clear and absolute in its intent, but instead delves deep into questioning the validity, nay utility, of any form of futurism or anticipating what’s next – even in the digital age with all the cognitive power of artificial intelligence and algorithms. Data is giving us more and more information; but, really, we are none the wiser. She ponders at one point: why did we not predict Brexit?

In an almost garden-like, purpose-built space full of screens, seating and tubular dividers she creates a dream world that allows your mind to wander, while at the same time keeps at close proximity the prospect of an unassuming nightmare taking over your personal space. There are three screens full of colour, sounds, voices and text, overlaid by concrete and abstracted images of plants and objects. Her painterly videos evoke the political power of florae, the botanical issue of human intervention into nature and the medical repercussions of ecological tampering.

She uses the floating expanse of the sea as a kind of Land of Oz, where anything is possible, even if that means pitting the forces of utopia and apocalypse against each other only to find reality somewhere in-between. You feel a Nietzschean dichotomy of both tragedy and affirmation of life, as she dives into psyche and symbol, the dynamic of the unconscious vs acts of consciousness. Dionysus and Apollo are invited but they are not divine. Nature is.

The work conjures writers, artists and inventors of times past who are prophetic in situ: Jules Verne, Philip K Dick, Leonardo da Vinci. Da Vinci’s words “Men fight wars and destroy everything around them. The earth should open and swallow them up” appear with images of machines mingling with sea life under water.

That quote continues: “He who does not value life does not deserve it. Never destroy another life through rage, or through malice.” She projects a sense of commonality in our quest for survival.

Here and in her work in general, Steyerl nods to Hannah Arendt’s praxic concept of mentality as part of citizenship and civic duties by personifying such characteristics of human cognition of being able to form ideas and transform them into new representations – whether they are progressive or not is a separate question. She pursues this very modern concept of innovation being about building a future that is not led by the past, even if the two are inherently linked.

Steyerl trained technically as a camera person, and then studied documentary filmmaking. She has said her work explores “how reality can be wildly imaginative, encourage audiences to sit down and take a break” and that she is interested in “the traction between desires and misunderstanding”. In the future that she asserts around the room, there is no certainty in its ephemerality, but there is hope and beauty.