The first master of video art. 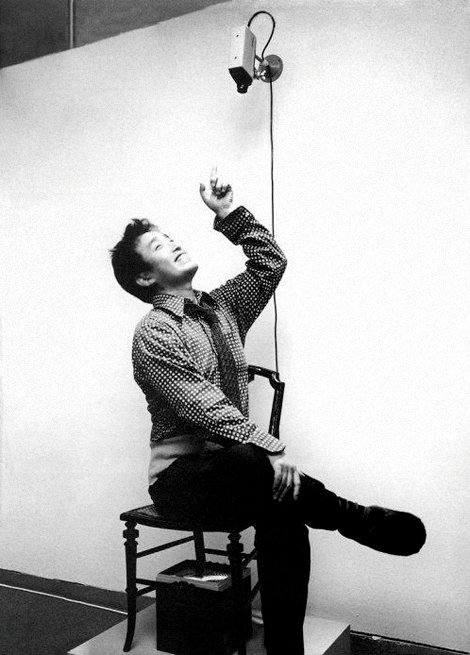 A recurring set-piece in the 1987 film Less than Zero, loosely based on a novel by Bret Easton Ellis, are stacks of televisions playing music videos or CCTV images of hedonistic partygoers. In line with the film’s strong anti-drug message and depressing moral tone, these stacks of TVs act as reflections of the fractured, eternally self-conscious lives of its protagonists. They speak of post-modern malaise and slot nicely into a cautionary tale about the friable morality of 1980s American youth, addicted to drugs and MTV.

I was reminded of this film walking around the excellent retrospective devoted to the late video- and media-art pioneer Nam June Paik (1932-2006) at the Tate and FACT in Liverpool. The Korean visionary was the first artist to realise the potential of television as an artistic medium. And while stacks of TV sets playing a seemingly unending sequence of imagery feature often in his extensive oeuvre, they speak more of his excitement with the medium than of any fears about what its negative effects might be.

The retrospective is split over two exhibition spaces. At the Tate, the focus is on his installation and musical work, especially his later large-scale installations, and the ‘happenings’ he organised with fellow artists. At FACT, the exhibits are mainly of his video and TV work, in particular his seminal 1973 video and electronic collage Global Groove and satellite transmission Good Morning, Mr Orwell, a mishmash of real-time performances from around the world on New Year’s Day in 1984.

These works especially presage our current age of channel hopping, internet surfing and online video. Paik’s excitement regarding advances in technology tapped into deeply held ideas about the democratisation of otherwise specialist knowledge and he longed for a day when artists could have their own TV channels. The potentially vast access people now have to such information makes Paik’s practice all the more prescient. The clunking heaviness of much of the technology powering the works in the exhibition shows how far we’ve come in a short time.

Paik saw aesthetic possibilities in the physical box itself, as well as in what it could transmit. He used numerous TV sets to create whole walls of flickering images, or as building blocks for families of robots, putting a human face on then-new technology. But the early work also shows him exploring the potentially meditative possibilities of the medium, with the box as a frame for artistic imagery.

Zen for TV (1963) is an old TV set placed on its side, with a single line bisecting a rectangle of bluish grey. The television was damaged on the way to an exhibition and the line was a happy accident, tying in nicely with ideas about chance mined from his friend and collaborator John Cage but also from Zen Buddhism. Elsewhere a room of sculptures of Buddha staring into CCTV cameras divests the technology of its negative, watchful associations. These works make for a hushed counterpoint to Good Morning, Mr. Orwell, whose joyful excitement refutes the idea proposed in Orwell’s novel 1984 that technology is necessarily a tool of oppression.

By far the loveliest work in this part of the exhibition is Moon is the Oldest TV (originally 1965, though the Tate is showing a version from 1992), which shows the various states of a waxing moon on 11 televisions on pedestals. Least compelling is the room dedicated to Paik’s involvement in the avant-garde Fluxus group, of which Yoko Ono was also a member. Gallery posters and props from the group’s radical happenings (performance events featuring elements of chance and usually inviting audience participation), displayed for the most part in closed glass cabinets, make for interesting documentary evidence but fail to conjure a sense of what these were really like. Yet it shows how important collaboration and outreach were to Paik from early on in his career.

At FACT, the one installation is the large-scale Laser Cone (1998), a spandex cone onto which beautiful laser images are cast. Viewers are invited to lie beneath the cone and enjoy the trippy visuals. Videos are shown in a darkened gallery upstairs and viewers can turn on, tune in and relax. Flat-screen TVs and comfortable sofas make this viewing space much more analogous to the home than the museum, which is as Paik would have wanted it, especially as his satellite and TV transmissions were intended for home consumption.

These latter pieces make for fascinating viewing. Psychedelic whorls and screens split into hundreds of smaller screens (much like the stacked TVs), all showing the same footage, dominate. Images flicker, blur at their edges or are layered on top of one another other. Narratives develop in fragments. The experience is akin to watching someone today surfing numerous music-video channels. Indeed, the influence of these early works on the rhythms of pop promos seems enormous.

“This is a glimpse of the video landscape of tomorrow, when you will be able to switch on to any TV station on the Earth and TV listings will be as fat as the Manhattan telephone book,” says a voice at the beginning of the single-channel video Global Groove. What ensues is an energetic cross-cultural melding of performances and images, from pop music to experimental art.

Good Morning, Mr. Orwell extended these ideas with a live satellite link-up across numerous locations. Shared between WTNET TV in New York and the Centre Pompidou in Paris, and linked up by satellite to broadcasters as far-flung as Germany and South Korea, the transmission was beamed to an estimated 25 million people across the globe. Technical problems kept the transmission from running smoothly, but the atmosphere of joyous contingency is a delight.

In his book Postmodernism, or, The Cultural Logic of Late Capitalism, cultural theorist Fredric Jameson talks about the way in which viewers confronted with Paik’s stacks of TVs “are called upon to do the impossible, namely, to see all the screens at once, in their radical and random difference.” But perhaps what Paik offered in his work was not so much an invitation to compute disparate narratives simultaneously, but rather simultaneity of experience, one that spanned geographies and cultures and time differences: a smorgasbord of culture, from high-brow to low.

Fittingly, many of his videos can now be viewed on YouTube and other online outlets, some in snippets but many in their entirety. It’s a small concession, but the fact that the viewer at FACT is able to wield the remote control links pleasingly with Paik’s ideas about television being a space in which to exercise one’s autonomy. Among his many contributions, one of his greatest may be refuting the idea that TV is bad for you.