“This is confidential material. Where did you get it?” Frederic Raphael looks back at Eyes Wide Shut 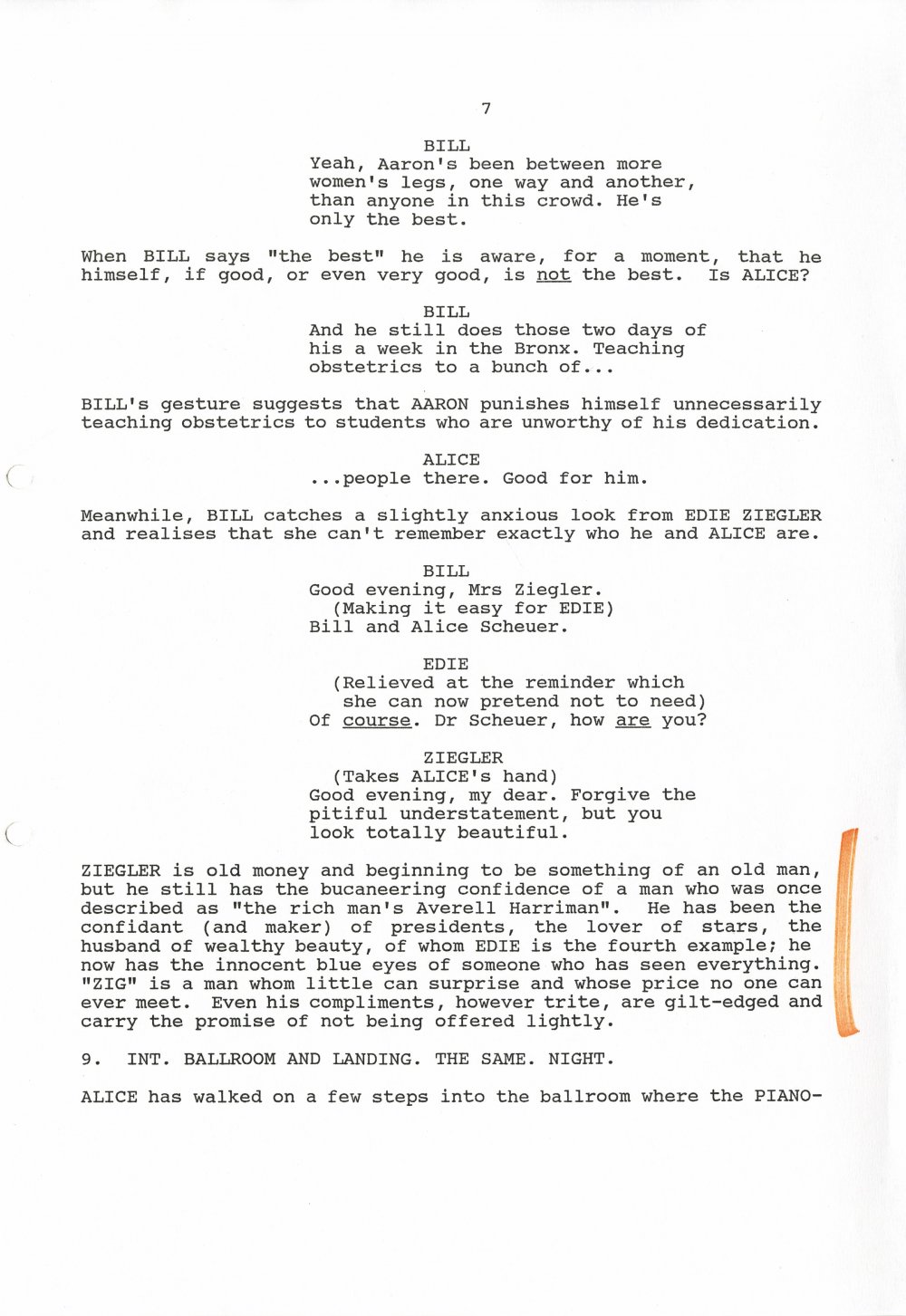 “Je ne cherche pas, je trouve” was Picasso’s retort to a pious inquiry about how he looked for ideas. His use of a set of handlebars to confect a metal goat was a typical example of literal recycling. Henry Moore was inspired by weathered rocks; Tracey Emin by weathered beds. The litter of earlier material disposed Stanley Kubrick, as it did ancient Greek tragedians, to select his subjects from existing sources; Barry Lyndon (1975) – from an 1844 novel by William Thackeray – the least likely, most faithful instance. ‘Make it new’ depends on there being something old. 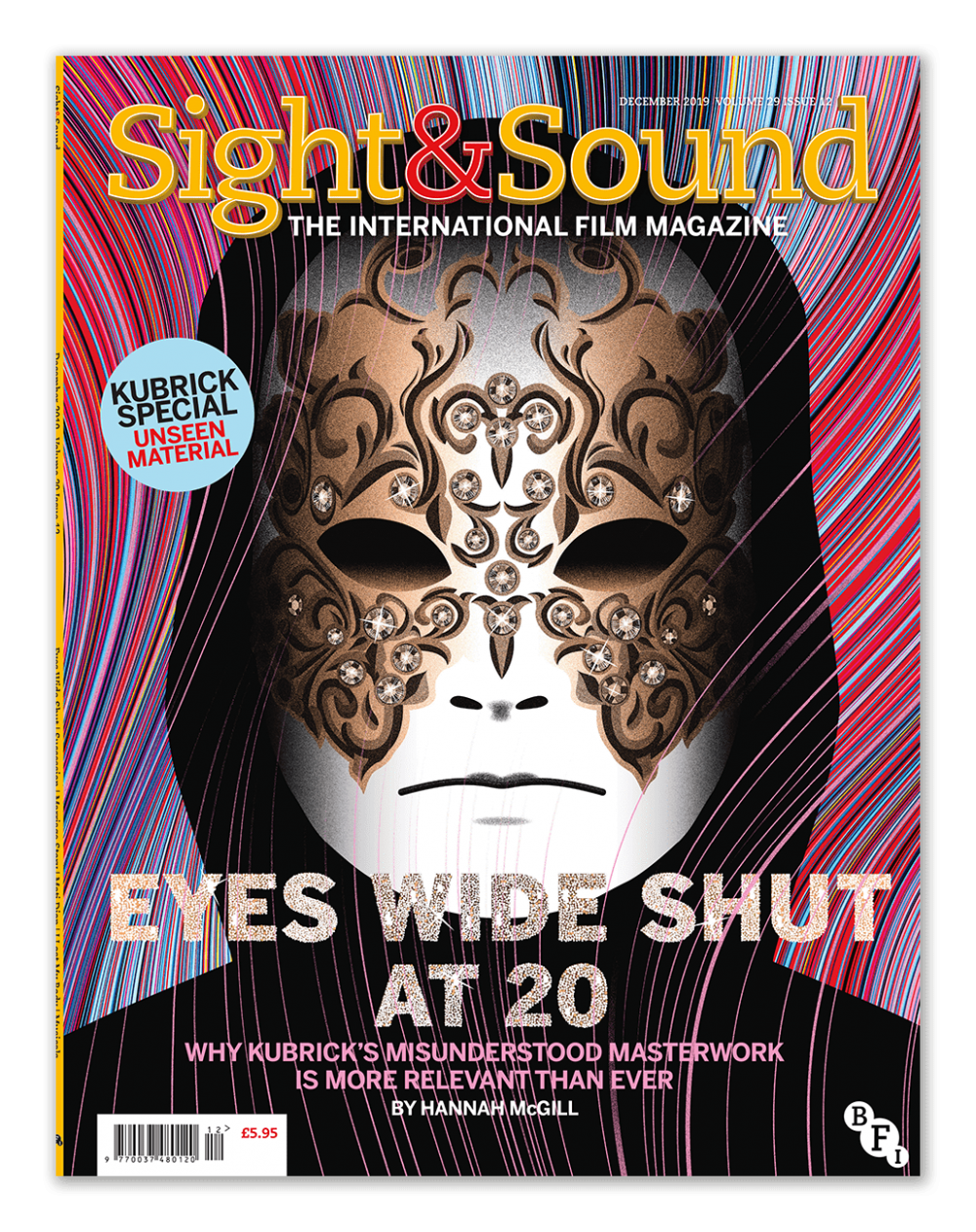 The Eyes Wide Shut December 2019 special edition of Sight & Sound is out now.

Eyes Wide Shut is re-released for its 20th anniversary on 29th November 2019.

Eyes Wide Shut is a translation in both time and place: Arthur Schnitzler’s Vienna of the 1880s in his source novel Dream Story (Traumnovelle) became ‘today’s’ New York, constructed at Pinewood. What passed for ‘now’ included ‘then’: the New York City of Stanley’s adolescence. Woody Allen mocked the lavishness of what was supposed to be a young doctor’s Central Park West home, but the dreamy aspect of Schnitzler’s novel sanctioned subjective distortion. The title Eyes Wide Shut was devised, in a blink, by Stanley, after I had proposed ‘Woman Unknown’.

While Stanley incited me to re/present a Viennese marriage in modern dress and dialogue, he reverted, with pious regularity, to what he called “Arthur’s beats”: the movie should honour Schnitzler’s dreamy source. This included, so Stanley insisted for a long time, the ending in which the story’s sleep-walking antihero finds himself awake and back in the conjugal bed.

During more than two years of collaboration, Stanley and I met, always at his barbed-wire fenced compound near St Alban’s, only three or four times, for lunch. No one else was ever present. We never sat down to discuss problems on the script. Our practical conversations, often of an hour or two, were on the phone. After Stanley had studied the pages I had faxed, he would say that he liked this or, as time went on and he became more anxious, did not like that.

Legend promises that, in the 1960s, he had toyed with making an art version of a blue movie with Terry Southern, when they were working on Dr. Strangelove (1963). The closer he came to shooting Eyes Wide Shut, the more anxious he became about how to double the outrageous with the permissible. He scanned whorehouse brochures on Japanese TV in the hope of happening on clues.

Eventually, Stanley asked for some plausible background for what the orgy’s master of ceremonies, a millionaire whom I called Ziegler (played by Sydney Pollack), regularly organised. One critic has insisted Ziegler’s name was culled from some 14th-century Hasidic rabbi. In fact, I nabbed it from a garrulous agent who represented me in 1969.

In response to Stanley’s request, I typed out several pages of what purported to be an undercover FBI agent’s dossier on Ziegler and his friends. Their sexual extravaganzas were alleged to have been staged in honour of J.F.K.

I faxed my pages to Stanley and was almost instantly called back, in a voice I had never heard before. He wanted me to tell him right away where I got “this stuff”. I said, “From between my ears.” He said, “Freddie, don’t fool around with me. This is confidential material. Where did you get hold of it?” “Stanley,” I said, “I’m a writer. I make things up.” Even provocateurs can dread the knock on the door.

Eventually I convinced Stanley that there should be a final scene with Ziegler which would explain some of the things that had happened in the ‘dream’. He turned down an early version, although he liked it, because “It needs Bogart and Greenstreet and unfortunately I can’t get them, so… would you do it again?”He used to ask the same thing of his actors. He did not know what he was looking for, but – like Picasso – he recognised it when he came across it.

Related to “This is confidential material. Where did you get it?” Frederic Raphael looks back at Eyes Wide Shut