A curious faith: on Depeche Mode doc The Posters Came from the Walls 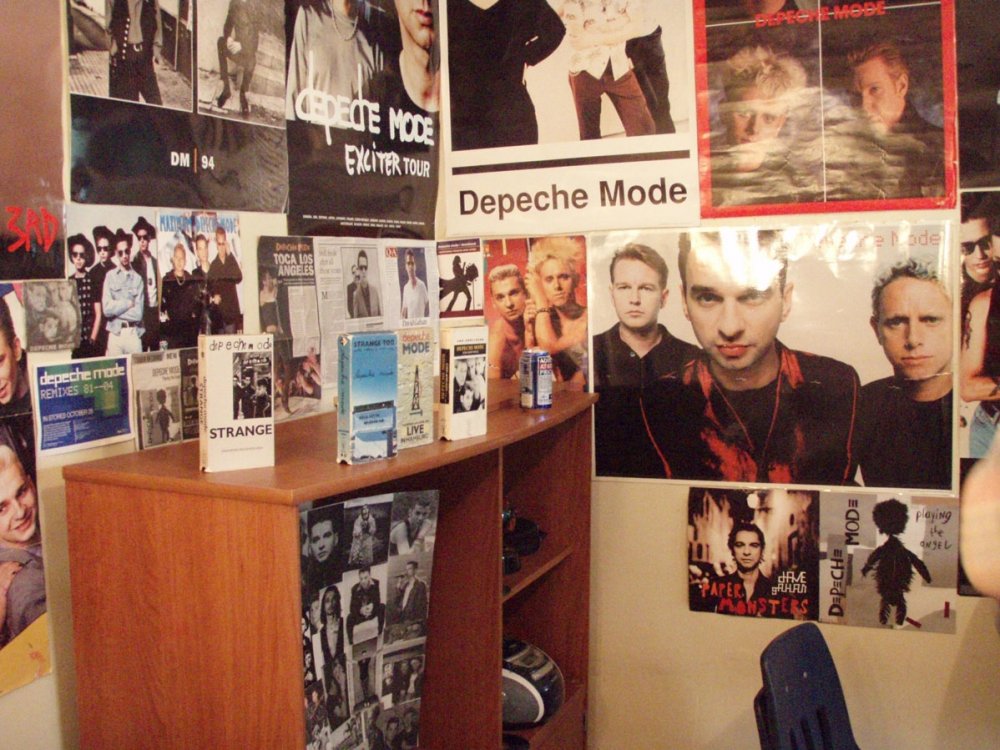 Several years ago, the British artist Jeremy Deller curated an exhibition called The Uses of Literacy. The title, filched disrespectfully from Richard Hoggart’s foundational 1957 cultural-studies opus, put a strident gloss on a collection of ephemera produced by fans of the Manic Street Preachers: poems, paintings of their doe-eyed missing boy Richey Edwards, and, most tellingly, photos of book collections, stacks of texts by Primo Levi, Debord, Ballard, proudly displayed in the corners of working-class teenage bedrooms. The music was never really mentioned, or only alluded to, as perhaps the least interesting part of a total aesthetic, an aesthetic which inspired a proliferation of amateur art – most of it, truth be told, fairly painful (though as a recovering Manics fan myself, I felt a combination of pride and utter, wincing embarrassment).

The reference to Richard Hoggart’s book was rather clever. While the original Uses of Literacy argued that Americanised mass culture (and music) was a waste of a literacy hard fought for and a squandering of a self-created working-class culture, Deller’s Uses of Literacy implicitly countered that pop music, that which Hoggart saw as mere “sex in shiny packets”, had created something as proudly literate and class-conscious as the Hovis advert culture his predecessor had attempted to fix in time.

The Posters Came from the Walls is in a sense an expansion outwards of this project, from British bedrooms to bedrooms across the globe, and appropriately it has a rather more (musically) worthy subject – Depeche Mode. Or rather, obsessive Depeche Mode fandom, which Deller and music-video director Nick Abrahams follow to Russia, (East) Berlin, California and Iran, creating an unassuming montage of interview footage and fan-shot clips.

Yet it also owes much to Deller’s Folk Archive, which collapsed into a continuum of self-created ephemera a range of seemingly conflicting objects, from café signs to Christmas lights, village fêtes and trade-union banners. The Folk Archive’s all-inclusiveness suggested that the bracingly myopic intensity of Manics fandom had relaxed into something vaguer, something more classless, which approached – although in its straightforwardness drew back from – the often creepily voyeuristic terms of ‘outsider art’.

Nonetheless, Deller is a man likely to be aware of the distinction the composer Hanns Eisler made between ‘folk art’ and ‘mass art’. While the former is based on continuity, the attempt to replicate an imagined pre-industrial community, a mass art or mass music was necessarily industrial, urban, anti-nostalgic, politically conscious rather than retrospectively yearning. Depeche Mode are not folk art, they are mass art, and the neo-Constructivist joke of calling an album Music for the Masses was not insincere. Like the ‘blast furnace music’ Eisler attempted to create for films by Joris Ivens, their records used – as one Russian fan here excitedly comments – everything from scissors to coins to cutlery as sonic components, and combined, in a manner more ambiguous than Eisler, political critique and the attempt to create a feeling of togetherness and solidarity. 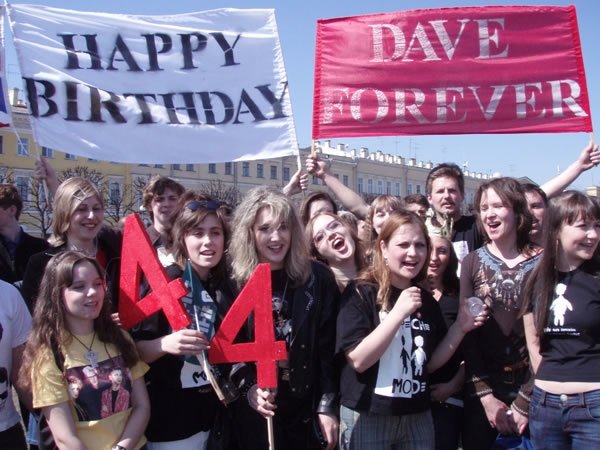 So it is appropriate that the film profiles the ‘Depeche Mode Riots’ that erupted in Los Angeles in the early ’90s, when angered fans failed to get into a record-shop signing session, as a reminder of the unreliable passions that pop music can elicit. Especially when we find one Russian fan, dressed with others in one of the several possible Depeche looks (early-1980s suited pop stars, mid-’80s vest-and-quiff Euroboys, early-’90s heroic goths) describing how he and his friends were “Depecheists… like Communists, or Fascists.” Depecheism obviously has its own anthems, but also rituals, and even holidays – ‘Dave Day’, celebrating the birthday of singer Dave Gahan, which just happens to coincide with the national commemoration of the end of the Great Patriotic War.

Of all those who feature in The Posters Came from the Walls, the Russian fans appear to have the most intense relationship to their mass art. Depeche Mode became known in Russia around the time of perestroika, we’re told, so still have a resonant association with this brief promise of political freedom – fan footage shows Depeche fans in the early ’90s, dancing gleefully in front of a now powerless Red Army soldier.

Like all pop cults, Depecheism is clearly a conformist non-conformism, but Abrahams and Deller never mock or patronise their subjects, and are keen to show how the obsession with the group is not always merely a substitute, a consolation, for the absence of something, but can become a spur to creating something else. One Russian woman, bleach-blonde and heavily made-up, shows the directors a comic she created depicting her and her friends married to the members of Depeche Mode, in which they have various adventures and mishaps, drawn in a luridly sexualised manga fashion. But as she turns the pages of the comic, it becomes clear this is about something stranger and more original than a mere fulfilment of a fan fantasy: it’s not really about the band, she says, but about her and the girls. They’re merely the thing that spurs the fantasy, which then develops into something out of their control.

At the same time as the Russian Depecheists clearly love the modernity of the group (“no guitars”, one notes approvingly), their work seems to speak to something more fundamental, even eternal. One woman tells of how their work connects with the spirituality of the Russian soul, its transcendent quality. Before reading her Russian translation of the lyrics to ‘Higher Love’, she tells the directors: “Don’t edit this.” They don’t. 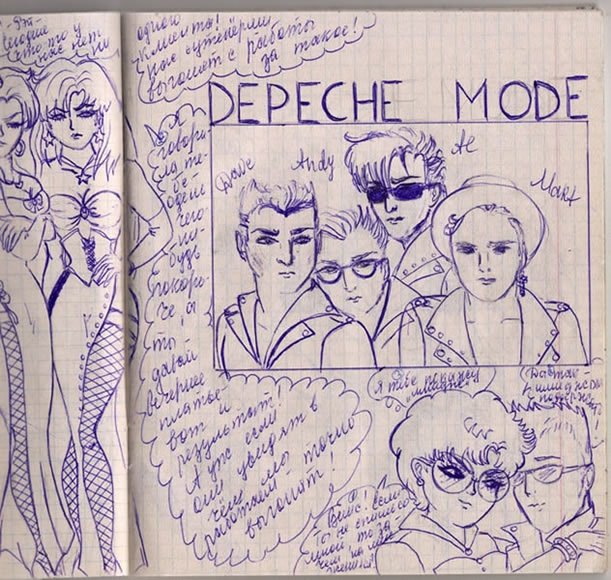 The Posters Came from the Walls begins with Depeche fans from various countries answering the question of what they imagine Basildon, the group’s Essex hometown, to be like. The answers manage to be as diverse as they are inaccurate – a small rural town, placid and quiet, or a glamorous place where there are constant parties. The reality is both more mundane and more peculiar, being one of the post-war new towns (or ‘Silkingrads’, the Russians may be pleased to know) created by the Attlee government, and Deller and Abrahams film its precincts and towers lovingly. The group are “prophets without honour in their own country,” as their Russian translator notes, and Basildon is the only location in the film where Depecheism seems thin on the ground.

The other place of former Depeche residence we visit is the seemingly more suitable Berlin. There’s a peculiar loop here, though: the new towns like Basildon were modernist attempts to Europeanise the English, and had their roots essentially in the town planning of the Weimar Republic, although the divine decadence somehow got lost in the translation.

The relatively few English Depecheists range from the vicars of a Cambridge church to a formerly homeless Londoner, stood next to the bridge he used to sleep under, who claims that the sense of collectivity at a Depeche Mode gig helped him to reconnect with other people. The directors then cut to the only stylised shot in this seemingly artless film, where the eyes of fans at a gig are tracked along, all of them looking the same direction, all with their hands in the air.

Not for the first time, the unnerving political undersides of this are implied. Depecheism seems a curious faith, one where the constructed nature of all this “faith and devotion” is constantly stressed – by the band, at least, in unsubtle songs like ‘Personal Jesus’ or ‘Master and Servant’. The sense of religiosity endures, however, most of all via memories of the East German concert which provides the film with its title. This is pop as a religion where stars come down to earth, where the images on the bedroom wall can literally be made (untouchable) flesh.

It’s worth comparing this uncomfortable, funny, and melancholic film with, say, Jonathan Caouette’s All Tomorrow’s Parties. This recent music-festival documentary shares a similar formal approach – a montage of fan footage and professional work – to The Posters Came from the Walls. But it’s all about the music, and the eventual effect of this is a deadening of all the things that make music for the masses interesting. The dreams, political, sexual or personal, that are projected on the pop band are all replaced with a curatorial assemblage of Good Music and cheerful hedonism.

Deller and Abrahams’ film argues that pop music is, at its best, about almost everything but the music itself. It carries the promise of transformation, the possibility of the fan or their world becoming something else. One suspects that the festival-goers of All Tomorrow’s Parties are better-adjusted, healthier subjects of late capitalism, as opposed to the occasionally sad, mixed-up, obsessive, sexually and politically confused milieu of the Depecheist international. Yet how boring they are by comparison! If pop music has threatened over the last years to become just another museum culture, its masterpieces and rediscovered classics repeated, reformed and toured over and over, The Posters Came from the Walls is a reminder that it promised greater rewards.

Related to A curious faith: on Depeche Mode doc The Posters Came from the Walls