Alien encounter: on the set of Ridley Scott’s sci-fi horror

Before the world knew what had hit it, our reporter Philip Strick visited the set of Ridley Scott’s answer to Star Wars, to discuss terror, smoke and the Alien Problem – but bathsoap not so much. 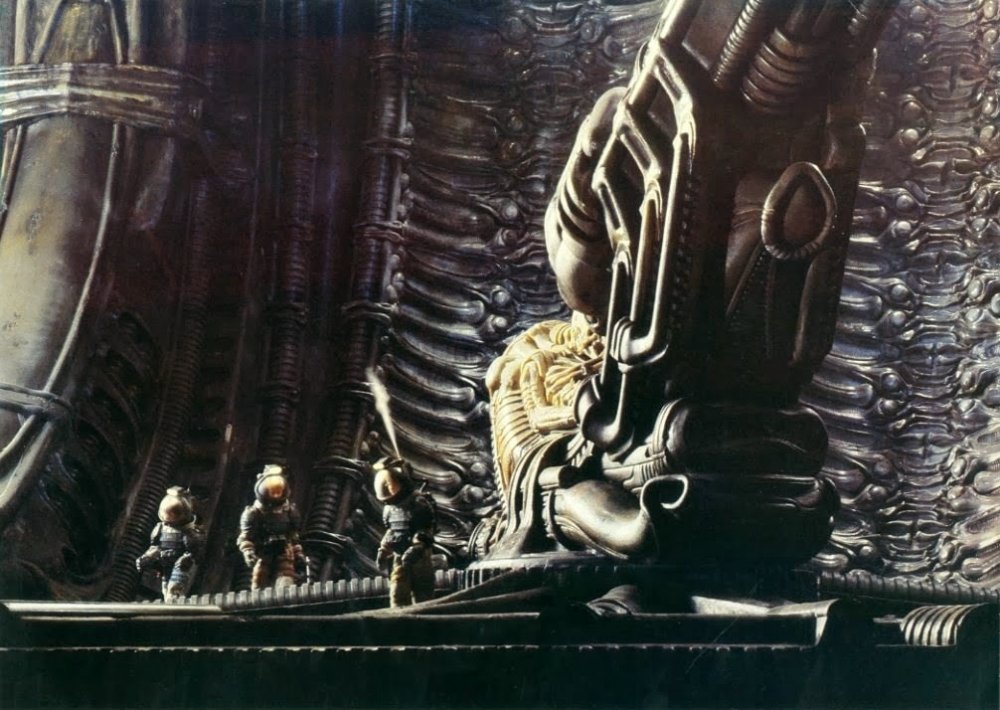 In the hottest days of last summer, they had constructed a labyrinth at Shepperton Studios, and deep inside it was Ridley Scott, compact, redbearded, in an Enigma jacket and an accent lightly recalling Tyne & Wear. The setting, once you reached it through cluttered, curving tunnels, was a blazing white anteroom with Ian Holm, looking about as distracted as it’s possible to make Ian Holm look, pacing at its centre. As Scott perched contemplatively on a giant camera, a script-girl murmuring exchanges of dialogue beside him, a section of the wall slid apart and two armoured figures lurched through, bearing a stretcher. The Alien’s invasion had begun.

Alien is back in UK cinemas for a 40th anniversary reissue.

On the spur of the moment, Scott decided on an extra shot of this fateful encounter. His performers, Tom Skerritt (from Big Bad Mama and The Turning Point) and Veronica Cartwright (who has grown up from being Rod Taylor’s tremulous young sister in The Birds), steamily allowed themselves to be encased once more in space-suits decorated with coralline knobs and sprayed with a mist of water like indoor plants. Several tunnels away, the flight deck of the U.S. commercial starship Nostromo was a litter of beer-cans, oriental pinups, comics and Confucius magazines. Next door, the hold of the starship was by contrast the size of a Greek temple, with monstrous metal pillars and a vista of impossible vehicles. The skeleton of a helicopter could just about be identified at the heart of one construction, but the other occupants of this giant parking lot were indecipherable; they shone with an obscure and disturbing beauty, patently immovable, misleadingly purposeful. 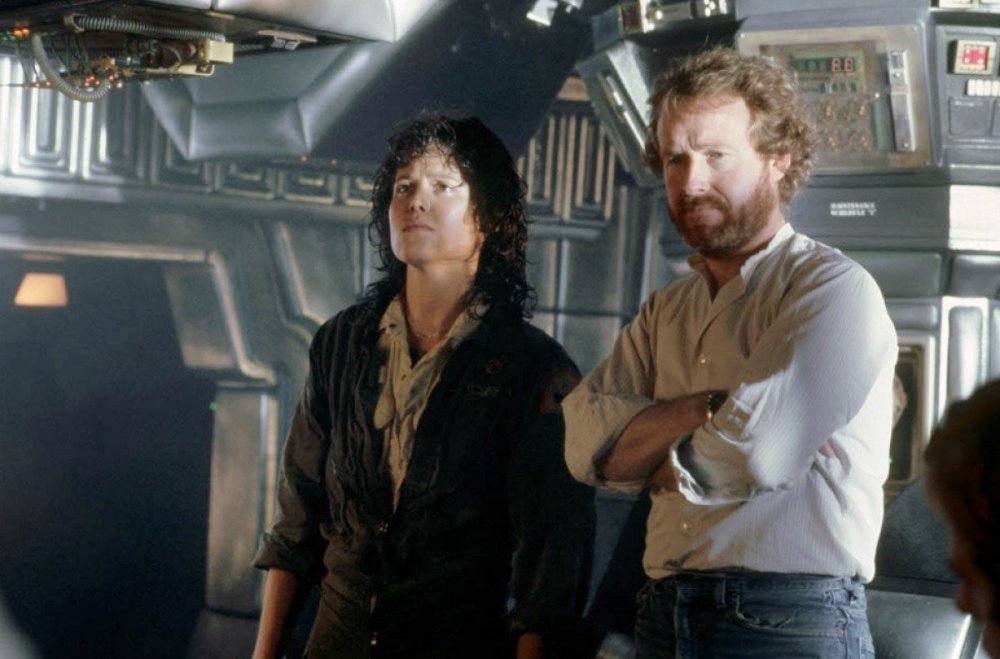 Sigourney Weaver and Ridley Scott on the set of Alien (1979)

Extracted from his labyrinth, Scott talked about Alien with the enthusiasm you’d expect from someone who had been entrusted with around ten million dollars to produce a box-office success comparable to Star Wars for 20th Century-Fox. The first thing to make clear was that this would be an altogether tougher film. Although the exact appearance of the Alien itself was intended to be a closely guarded secret, hidden from everyone including Fox executives, word had already got out of a scene in which the creature bursts bloodily from a man’s chest. It is, said Scott, a film about terror that happens to be set in space but could have been anywhere in an isolated location where a group of people faces the unknown and the uncontrollable. The story, dreamed up by Dan O’Bannon of Dark Star fame, and not too many light-years away from the beach-ball subplot of that film, is of the discovery of a new and lethal life-form on a distant planet, and of its eradication of its discoverers one by one.

Scott’s background, discounting a charming first film made many years ago for the BPI’s Experimental Film Fund, Boy and Bicycle, was as the designer of innumerable BBC plays and the director of some of the most successful television commercials ever created. His first chance at a feature came with The Duellists, received with caution by British critics but with lavish enthusiasm by the French. The script for Alien, developed by David Giler and Walter Hill (director of The Driver), came to him out of the blue and, he says, knocked him flat. “It was definitive, totally direct, and did its job in that it was terrifying, straight off the page.” But it contained one major problem: the Alien. 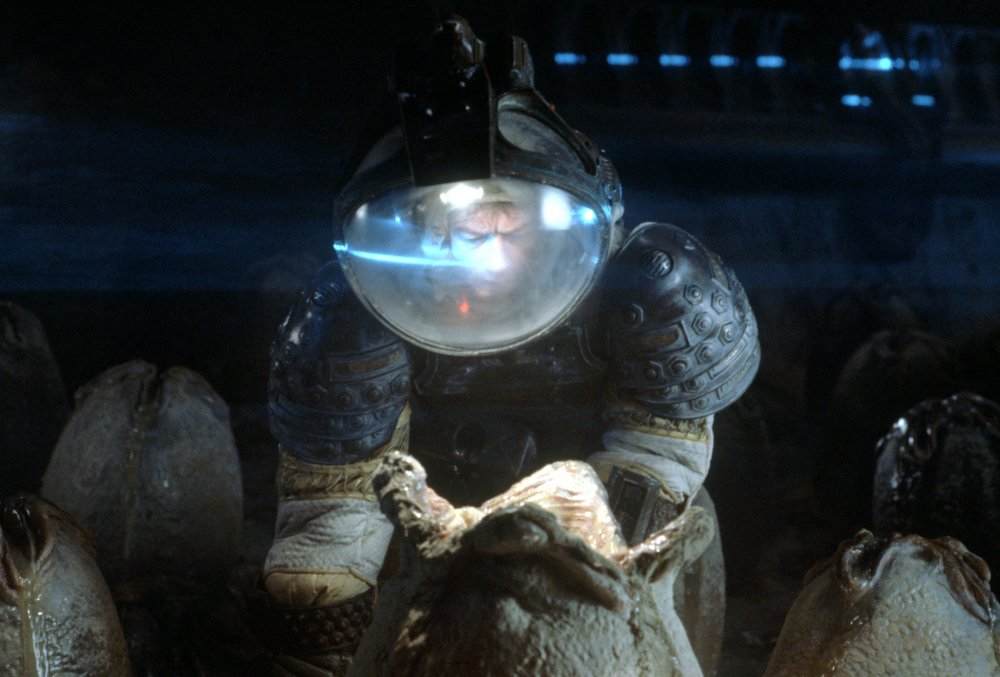 “Who is the Alien? Whenever you get to the monster in a horror film it’s a big let-down, everyone has a good laugh and that’s it. All the atmosphere bursts like a bubble. There was no way I could approach the film until I had an extraterrestrial creature that we could, so to speak, live with.” Part of the answer, it seemed, was to have several Aliens – the thing grows like some tropical insect through a series of metamorphoses. But the secret of the creature’s appearance, and linked with this the whole disconcertingly visceral appearance of the film’s settings, proved to emerge from The Necronomicon.

Science fiction fans whose tastes extend as far back as the 1920s, and the first editions of a pulp magazine called Weird Tales, will speak to you in whispers of the dreaded ‘Necronomicon’ and of its fabled creator, the Mad Arab Alhazred. His chroniclers have included H. P. Lovecraft and Robert Bloch, but the contents of his appalling texts have never been disclosed until the Swiss artist, sculptor and one-man happening H. R. Giger fearlessly arranged for the book’s simulated publication in the godless era of the 1970s. Giger’s artworks centre on the concept of the ‘Biomecanoid’, a fusion of the organic with the mechanical that puts Wells’ Morlocks back in the Dark Ages where they belong. His paintings depict the erotic, obsessive embraces of literally self-possessed hermaphrodite beings tethered, plugged into, or growing out of the coils, pumps and tubes of a technological nightmare. These couplings are witnessed by phalluses with warty infant faces, and serene foetal spectators. “Through Giger we found our Alien. It is very special. Terrifying and yet quite beautiful.” 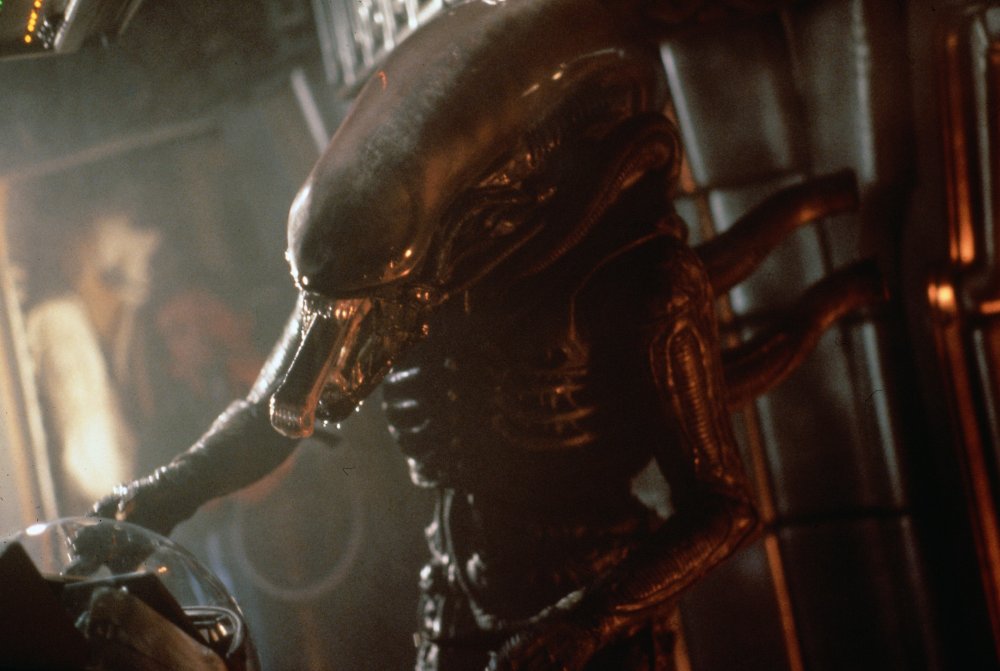 But there had, of course, been other contributions. The spacesuits, for example, were originally designed by one of the artists from the French comic for adults, Métal hurlant, plus some ideas from Japanese samurai films adapted, not too surprisingly, by one of the Oscar winners from Star Wars, John Mollo. One of the more abrasive American political cartoonists, Ron Cobb, had designed the starship interiors, with contributions from Star Wars veterans Les Dilley and Roger Christian, and from Ridley Scott himself. Before anyone else got to work on the film, Scott drew the whole thing in storyboard form. “Storyboard is very valuable to me because it’s like writing the script, and provides an overall conscious pattern – the style emerges as you work. Each scene is like an embryo, and then the film on top of that is another embryo.”

The control room of the Nostromo had filled with smoke, which it seemed was just how Scott liked it. “Smoke mutes the colour and creates a three-dimensional sense. It creates planes, slightly accentuates the depth. But it won’t,” he added hopefully as he vanished into thick fog, “be visible on the screen.” His departure was witnessed by the distracted figure of Gordon Carroll, producer for Alien, whose previous exploits include Cool Hand Luke and Pat Garrett and Billy the Kid. Somebody had just called him from Los Angeles to discuss Alien spinoffs. “They were talking about Alien bathsoap and Alien beachwear,” he said. “Christ knows what kind of a film they think we’re making…”

Related to Alien encounter: on the set of Ridley Scott’s sci-fi horror