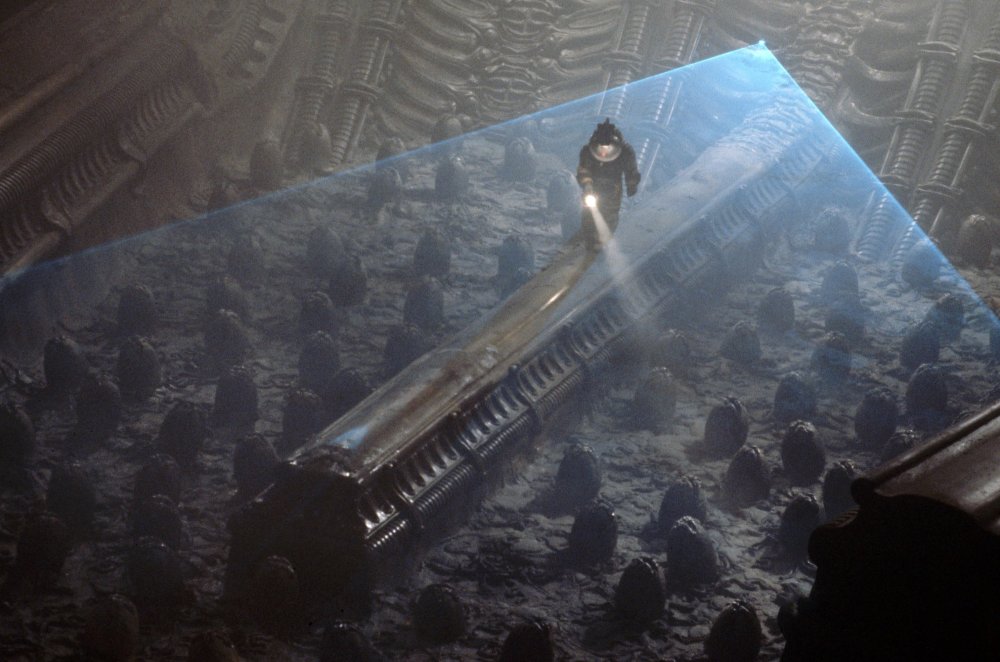 If there is a distinguishing feature of British science fiction films, it would have to be (although the description is all too glib) their insularity. Whereas the American cinema tackles the monstrous and the unknown with a certain brash contempt, undoubtedly the result of a national ability to turn any kind of immigrant into an average American, the British consistently treats its visitors with an uneasy reserve. Since the time of Wells and the other fin de siècle journalists, our fear of invasion has had more than geographical implications – we have not yet lost enough arrogance to tolerate becoming part of someone else’s Empire. The Quatermass films, and the extraordinary grip that the initial television series achieved, demonstrate this with striking clarity; they evoked horror simply by the threat of absorption into a different kind of existence.

In Ridley Scott’s Alien (Fox), the Quatermass syndrome continues. For all that its producers, writers and cast are predominantly American, this gorgeous, leisurely horror film expresses a spectacularly British xenophobia, a parenthetical nightmare of invasion envisioned between an awakening (at the start of the film) and a return to sleep (at its close). Had Scott started and ended the story on the same face, his metaphor might have been too emphatic: the waking dream of a girl, any girl, whose authority, integrity, identity are due to be challenged. As it is, the implications are wider, more national, one way of life versus another, a parable which, like The Deer Hunter, asks whether we go out and adapt or stay home and stagnate, and which, like Invasion or Village of the Damned, concludes that we are better off with the strictest quarantine regulations in the world.

If the film has something new to offer, then, it is certainly not its theme, which echoes affectionately with misquotes from a clutch of fantasy classics, most noticeably from The Thing and Creature from the Black Lagoon and most unavoidably from Star Wars and Dark Star. One speech about the alien brings instant recall of the scientist’s tray of bloodsucking shrublets in the Hawks film (with perhaps a hint of Siegel’s bodysnatchers): “I admire its purity – it has no conscience, no remorse, no morality.” In fact the alien’s requirements are modestly conventional: to survive long enough to procreate, just like any other tourist. That it needs to plant its offspring in living containers is the merest mischance, particularly for the living containers.

Although there are not yet enough Ridley Scott films for us to be more than tentative about his underlying concerns, it’s intriguing that both Alien and The Duellists deal with forms of symbiosis. The two obsessive swordsmen, hacking at each other while the Napoleonic Wars roll by, occupy a similar extra-temporal plane to that of the starship Nostromo and its crew. The direction of their lives is dictated partly by the military code to which they are sworn (finding its counterpart in the all-powerful ‘Company’ that owns the Nostromo and its crew under binding contract), and partly by the fascination of their otherwise purposeless feud.

In Alien, the small group of specialists existing inertly in sleep-pods is forced to come to life and to keep fighting until the battle is resolved; for them too, the duel gives meaning to their journey. And Scott makes additional reference to co-existence in his use of the ship’s cat, the other alien, whose wanderings on the Nostromo are carefully linked with those of the more lethal visitor. The cat, not the alien, gets netted early in the hunt, while Scott cuts to the eat’s face as a victim is noisily claimed, as though the whole event were part of a feline master plan. And indeed it’s the cat that gets the girl when the time comes again for deep sleep. We’re left with the reminder that aliens already share our world, and that some have longer claws than others. 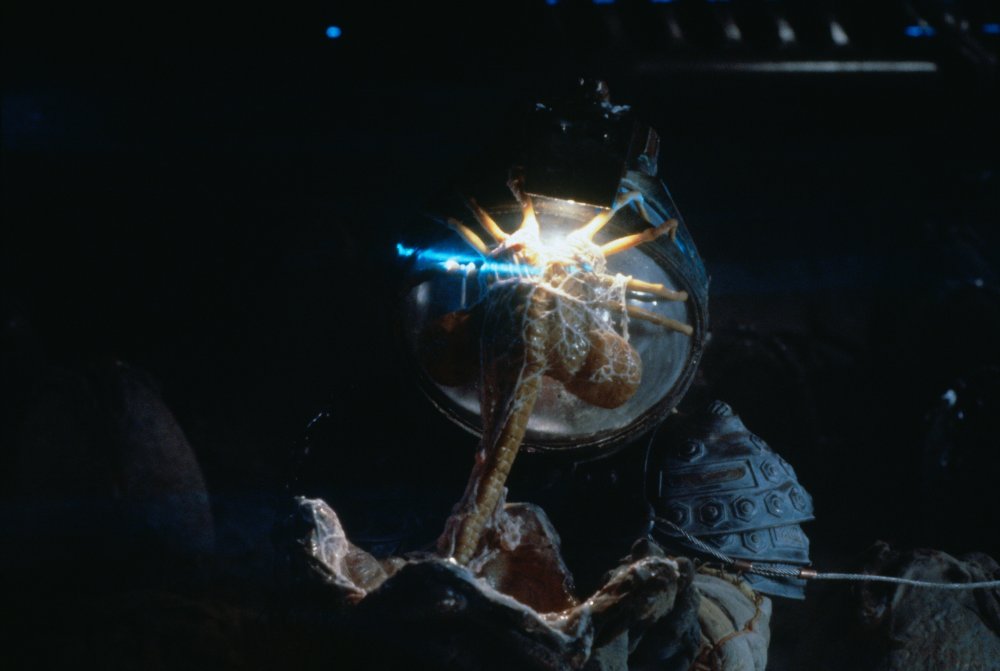 The weakness of Alien – and Scott has done his best to conceal it – is that there is not much variety in a narrative constructed around a monster-hunt. Once identified, the thing has to be pursued through identical sequences of mounting suspense until the climactic instant when it taps the next victim on the shoulder. Apart from one very clumsy such encounter, when the thing all but says ‘boo’, the film dutifully deals out the shocks, although with increasing desperation – great bursts of Dolby stereo at first, and shrieking strobe flashes at the end, as if our astronaut were looking for Mr Goodbar.

But two main factors take it distinctively out of the ordinary as a horror show, the first being the uniquely revolting scene of John Hurt’s dinner-table death as the creature lifts from the bloody swamp of his chest, and the second being the changing appearance of the alien itself. First seen as a prehensile kind of shrimp, expiring into a rather damp mixed grill, it is quickly transformed to a living Giger sculpture of organic steel, unfortunately never pausing long enough to be admired in its full beauty. 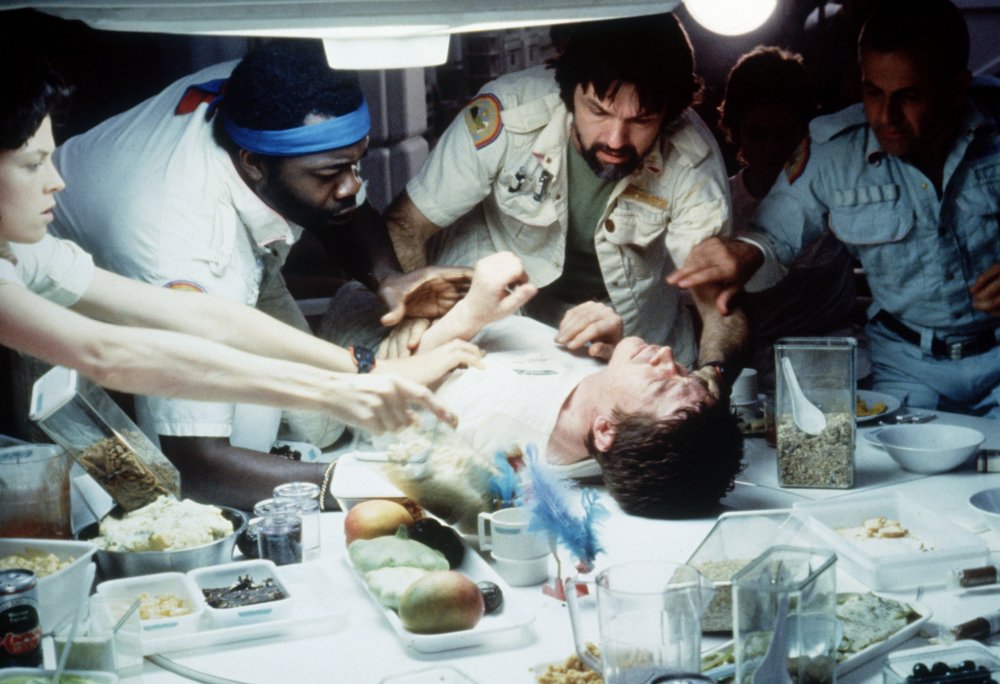 And beauty, ultimately, is what Alien brings to science fiction cinema, from its first contemplative prowl around the superb corridors of the Nostromo to the quite magnificent sequence of the planetary exploration, the entry of the alien spaceship through vaguely obscene orifices, and the revelation of the vast, chilling desolation inside. The film has been designed and shot with such glowing care that the astronauts, unlike their rumpled counterparts in Dark Star, are more objects than people, parts of a general design of colour and texture, models to support the magnificent encrusted spacesuits designed by John Mollo. Impractical they may be (the faceplates are constantly steaming up), but as they stumble across the hideous landscape these armoured shapes have a vulnerability that contrives to be more appealing than the people inside them, providing an unexpected and subtle link with the antagonist they are going to meet.

With the sole exception of 2001, where the hardware was all clean, antiseptic lines and lights, Alien outshines all competition in the luminous splendour of its photography, and what it lacks in substance it more than gains in the elegant pattern of its images. Despite the shocks, the gore, and the amiable performances (of which Veronica Cartwright’s is the most thankless, Ian Holm’s the most intriguing), Alien evades what was mundane in Star Wars and obscure in Close Encounters and reminds us once more that science fiction is the story of inner space.