How can cinema make visible the digital data transfers that increasingly dominate our lives? Jehane Noujaim’s and Karim Amer’s new doc on the Cambridge Analytica scandal (and Sleater-Kinney’s new music video) step up to the challenge. 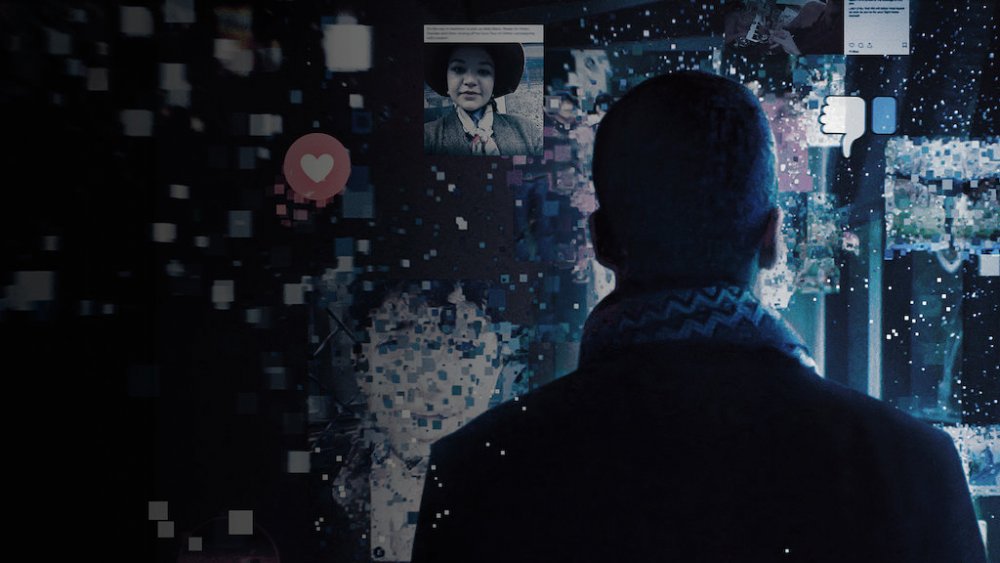 The video for Sleater-Kinney’s Hurry on Home, the lead single from their 2019 album The Center Won’t Hold, takes place entirely on an iPhone screen, its slim vertical leaving acres of black on either side of the horizontal screen. The song is a claustrophobic, beat-driven shout-out to a lover who is dallying with another, the lyrics relayed on-screen via iMessage, complete with autocorrected typos and emoji responses from the lover elsewhere.

The Great Hack is available to stream on Netflix.

During instrumental sections, the screen shifts swiftly from iMessage to FaceTime (Miranda July pops up) to gym videos on YouTube to Tarot and I-Ching apps, until the final chorus ‘You got me used to loving you’ seems to be addressed to the phone itself: to the insecurities and anxieties caused by the internet and instant access. The video opens with a stream of singer Carrie Brownstein’s Instagram, pausing on the wildly popular Insta post that announced the recording of the new album with producer St. Vincent. The chorus calls for the lover to disconnect the singer from her bones and skin, to erase the marks so she can roam: ‘disconnect’, ‘erase’ and ‘roam’ all smack of the phones from which we can’t disentangle ourselves, even as we know they are doing us wrong.

The video for Sleater-Kinney’s Hurry on Home

The video adds a brittle edge of contemporary commentary to a rip-roaring sort-of love song. As Brownstein told Laura Snapes at the Guardian, “If people thought Sleater-Kinney was gonna put out some loud, anti-Trump record, they would be misguided… We’ve been addressing the #MeToo movement and shitty patriarchal systems of injustice and subjugation since 1995!”

But the undercurrent of social anxiety expressed by the flickering stream of apps amid communication across distance can’t help but feel political (and not just as it addresses the web as one of the “shitty patriarchal systems of injustice and subjugation”, although July’s use of FaceTime to evaluate her rear view, followed by the butt-toning YouTube video, definitely speaks to social media’s cascade of body-shaming). Instead, the screen within the screen is the centre that won’t hold: that won’t hold the right to privacy, in particular, but also in the sense of the larger geopolitical fractures for which manipulation of social media and online data are palpably culpable.

The video for Hurry on Home might have looked less fraught when it was released in late May 2019, but now – for me, and possibly many other viewers – its rapid text screeds and scrolling take place in the world reshaped, or made visible, by Jehane Noujaim’s and Karim Amer’s documentary The Great Hack, streaming on Netflix. Ostensibly and centrally about interventions into the 2016 US election and Brexit referendum, as well as elections internationally, by defence and data company Cambridge Analytica, it resonates so powerfully because it shows how and why “mere anarchy is loosed upon the world” (to continue Sleater Kinney’s quotation from WB Yeats) by the digital instrumentalisation, and weaponisation, of our individual, private data. 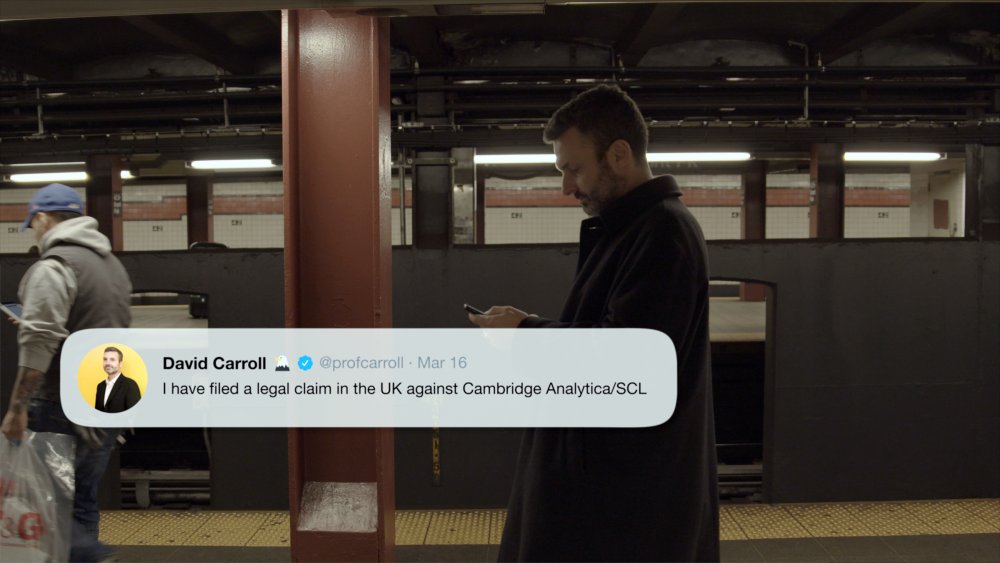 The Great Hack features multiple fascinating talking heads offering bombshell revelations from their perspective on, and involvement in, the unfolding investigation into Cambridge Analytica. As well as the expected – investigative Observer journalist Carole Cadwalladr, who broke the story – we meet and hear from more unexpected sources, such as CA’s Brittany Kaiser, who testified about the company’s illegal practices to government investigatory committees in the US and UK.

Noujaim’s gift as a documentarian, along with her nose for a telling meta-story about how our media define us (2001’s Startup.com, 2004’s Control Room), has been to get remarkably frank interviews from unsuspecting gatekeepers, powerful figures working behind the scenes who are somehow lulled into being frank with the curious woman with a camera – perhaps not taking her seriously enough. CA is cagier than either the US Army in Control Room or the Egyptian leadership in 2013’s The Square, particularly founder and meddler-in-chief Alexander Nix, who is instead seen only in company videos, and a grainy undercover sting by Channel 4 News. The human drama is important in restoring a sense that what lies behind all data is a person: the film begins and ends with the freedom of information quest by American academic David Carroll to retrieve the 5,000 data points that CA claims to hold on him (as on everyone in the US). But that human drama can only go so far.

As Amer told Neil Minow of RogerEbert.com, “It was all fascinating, exciting stuff, yet all of it was happening behind screens. As filmmakers, it was very difficult to find a film language that made sense for the message. What was happening online was like movement, so there was a lot of movement and kinetic energy in people’s tweets, in people’s conversations and the way people were moving through this virtual landscape and having conversations about that.” That’s reflected in Kaiser’s and Carroll’s physical movements between the US and UK as the investigatory committees heat up, which provides a customary documentary structure.

What really drives the film, however, is what it shares with the video for Hurry on Home: that most of its drama takes place on screens and behind them. In a sense, the documentary takes its form by thinking through a cinematic version of data visualisation. It’s hardly the first film to use animation and graphics to express either form of what we might call data: old-school, as in stats expressed in graphs and charts; and the seemingly endless supply of messages, insights, comments, images and responses we generate across messaging and social media platforms. While it’s now de rigueur for screen media, whether fiction or non-, to signal its contemporaneity by including pop-up bubbles to represent instant messaging, and flying texts that show a character tweeting or being tweeted about, it’s far more unusual for a film to be about the way such data exchanges happen, and how they are affecting the infrastructure of our lives. 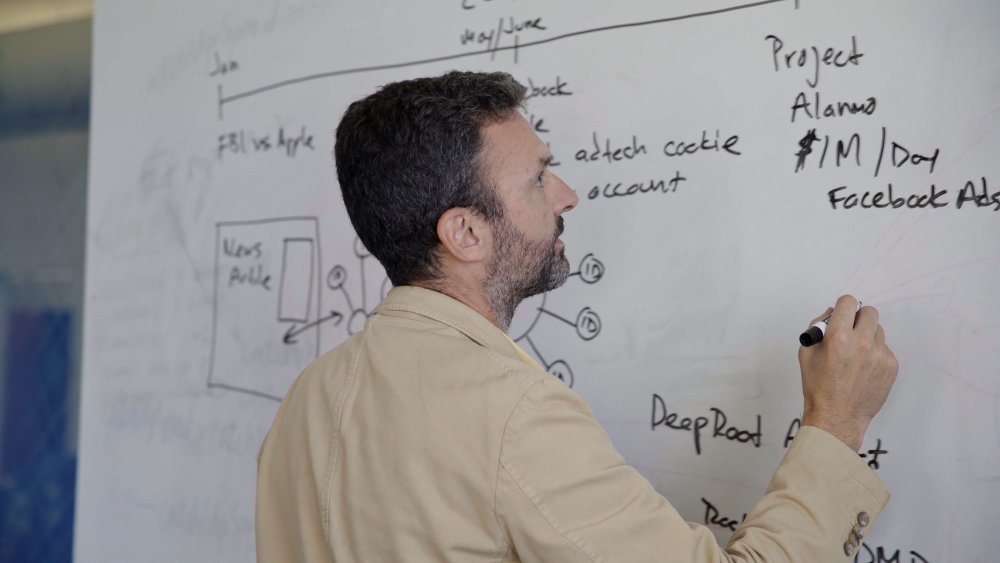 David Carroll in The Great Hack

Noujaim told Minow: “One of our producers, Judy Korin, is a graphic whiz. Again it comes back to taking what is happening invisibly in our lives yet is such a huge force in our lives and asking how you visualize it in a way that we haven’t seen before. We were trying to really understand and show what’s happening with our every mundane daily moves, what kind of data is being collected on us at all times.”

Amer points out that a team of graphic artists worked on the film to find ways to represent the aesthetic of messaging and socials within the textures of our everyday experience, but that the design had to go further: “It was very important to allow people to see that the algorithm itself had its own point of view and if we could allow ourselves to see how the algorithm sees us, that could allow audiences to see our vulnerability from a different perspective.”

You’re probably reading this on your phone right now. Kaiser and Carroll both tweet actively, contributing information and drama to the film’s unfolding, even as they understand – better than many of us – just how much data we hand over every time we engage, and how that data is used. Facebook is, of course, the main culprit in the CA case, having allowed the exploitation of its platform in order to provide those 5,000 data points, but it’s still surprising to see Carroll, in particular, continuing to tweet. 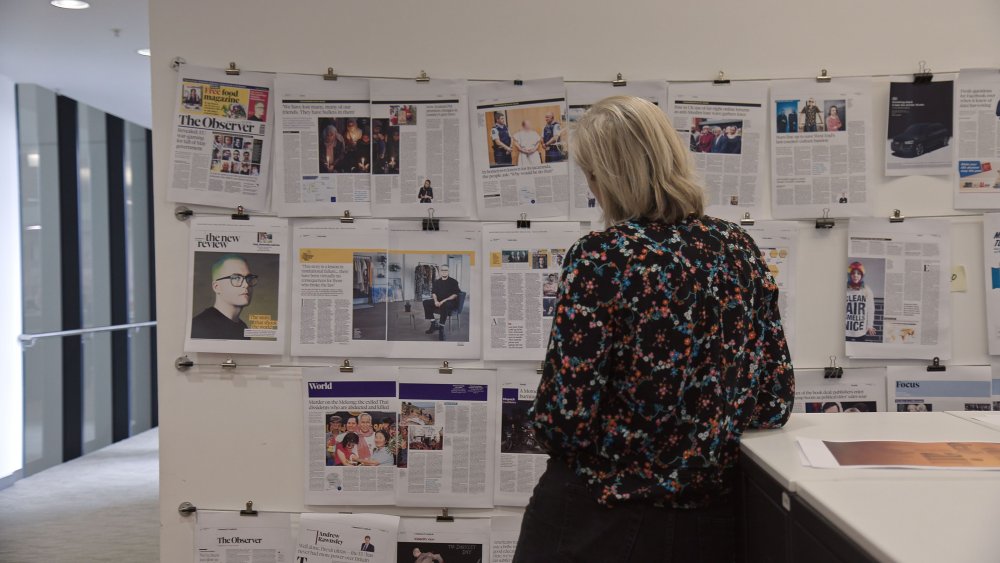 Carole Cadwalladr in The Great Hack

Cadwalladr makes the point in her TedX talk that social media was not, apparently, conceived as a form of draconian panoptical surveillance and control but rather – according to tech leaders such as Sergey Brin and Larry Page – towards an open society in which information and connection is democratised. In other words: it’s hard to give up social media, because it remains stickily attached to the pre-corporate web’s – perhaps naïve – ideas of information-sharing, giving a voice to all, bringing down gatekeepers, and creating a ‘global village’.

How do you make surveillance capitalism, in Shoshana Zuboff’s term, visible, given that it functions through its invisibility? Zuboff’s book The Age of Surveillance Capitalism weighs in at 704 pages; The Great Hack – running two hours 19 minutes – turns to the imaginative capacity of cinema, and particularly the seamless blend of animation and live action that is the hallmark of the digital era. While several reviews (not just on the right, but from leftier-than-thou publications, too) have questioned what they see as the film’s broad-brush approach in aiming blame at CA and Facebook through a focus on the human drama, none of the reviewers have paid attention to how the film tells its story formally, breaking new ground in realising, within documentary, our digital existences. 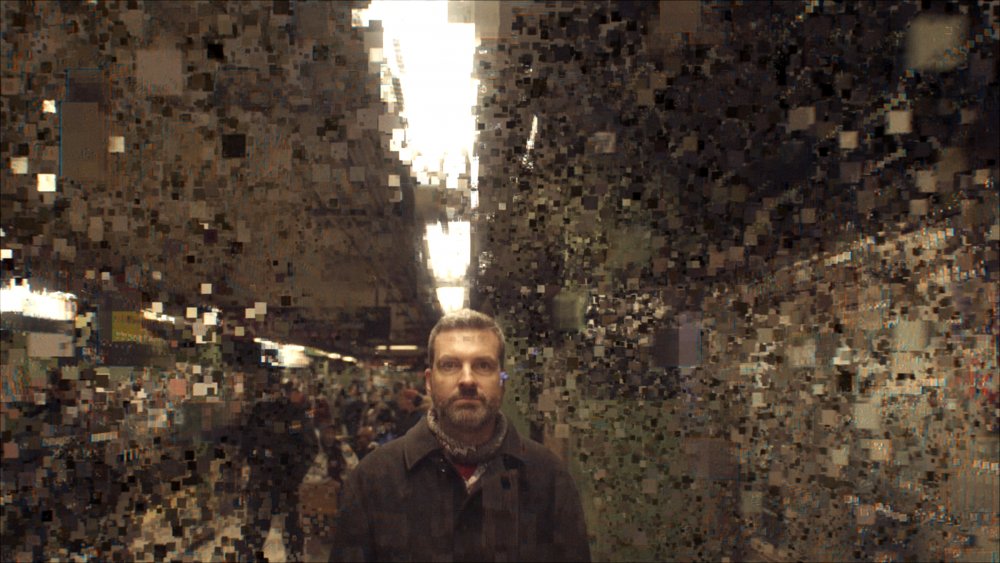 David Carroll in The Great Hack

The animation is by Toronto collective Shy Kids, an indie band and filmmaking collective specialising in animation and VFX, whose previous mainstream experience was in making commercials for Spotify and Tinder. Collective members Matt Hornick and Patrick Cederberg won best short film at the Toronto International Film Festival in 2013 for their graduate project. “Titled ‘Noah’, the entirety of the story is played out on a teenage boy’s computer screen. This unconventional perspective offers a unique look at behaviour and romance in the digital age,” according to Dragan Maricic’s interview with the filmmakers. Going further than the ASCII-littered conversations that feature in Miranda July’s Me, You and Everyone We Know, it screened the year before influential screen-based horror films Unfriended and Open Windows.

For all that the immersive screenlife format continues to be used for primarily for horror and thrillers, on-screen messaging and posting also increasingly drive the narratives and visual aesthetics of contemporary romcoms like Someone Great (2019) – indeed are what makes them feel contemporary. Inevitably, then, The Great Hack feels aesthetically a little like a meet-cute romcom, in which the climactic moment is crossover tweets between the three key interviewees – Carroll, Cadwalladr and Kaiser. But the overwhelming opening animation of Carroll’s data points flying off his body in thousands of tweets, messages, ads and geolocations shares something of the claustrophobia of screenlife horror. And not just any horror, but body horror. The film, implicitly, asks whether it will ever again be possible to do what Sleater Kinney seek, and “disconnect my skin”. 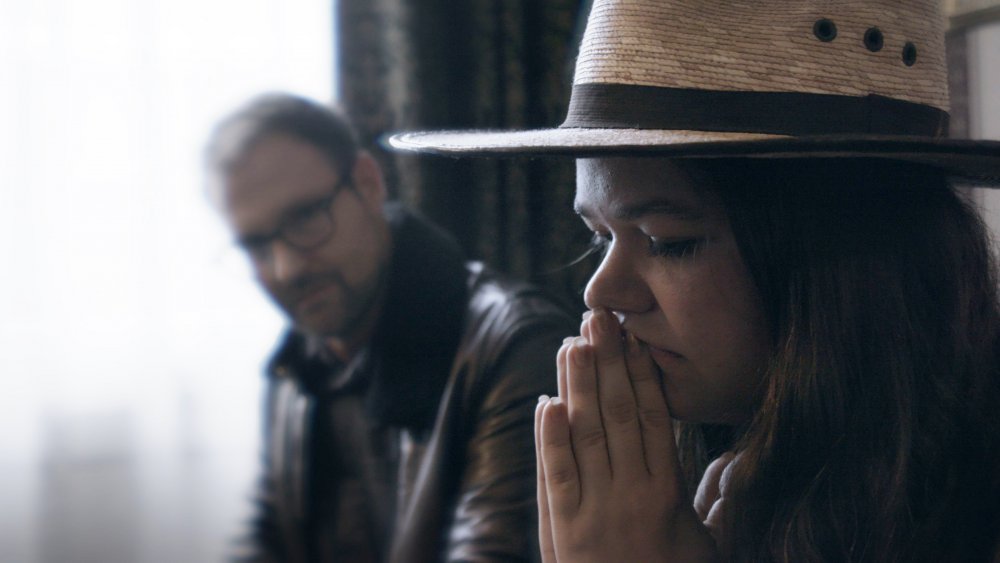 Brittany Kaiser in The Great Hack

Of course, and moreover, you can only see The Great Hack on Netflix, who produced the film which, interestingly, started as a documentary about the 2014 Sony Pictures emails leak (a fact that makes far more sense of the title) and thus about the film industry. In 2015, Tatiana Siegel noted in the Hollywood Reporter that “the untitled film is expected to drop new bombshells. Sources say director Noujaim and producer Amer will put forth alternative theories about the hack’s culprit,” pointing at an insider job rather than a North Korean hacker (the US Department of Justice issued formal charges against a North Korean citizen in 2018).

In some ways, The Great Hack remains implicitly a film about the film industry and its all-pervading relationship to the screen media that have succeeded if not yet superseded it. Even before a trailer is released on YouTube or a Twitter publicity campaign begins, cinema is completely and inescapably intertwined with all aspects of surveillance capitalism. Digital VFX – a kind of data visualisation in which the data becomes seamlessly invisible – is the backbone of most contemporary studio cinema; most independent films are shot on digital cameras that, even if they are not embedded in mobile phones, are still primed to upload large amounts of data about usage patterns to their parent companies. The Great Hack is, perhaps, an initial salvo in cinema’s attempt to make visible the new invisible.