Thirty-nine years after Raging Bull closed the London Film Festival – and two days before his new Martin Scorsese collaboration The Irishman followed suit – Robert De Niro took the festival’s stage for a forthright and wide-ranging Screen Talk. “I like the fact you can shoot movies and they last forever,” he told the audience. 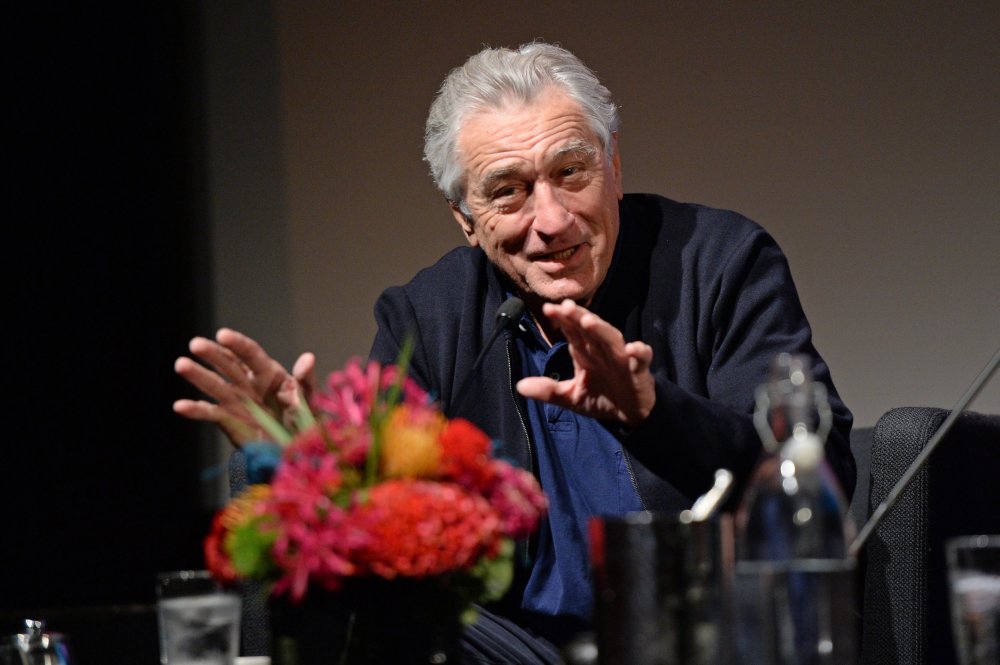 Robert De Niro may be well known for being one of the most prolific and celebrated screen actors of our time, but he is not known for giving many interviews. Sometimes interviewers have found him taciturn to the point of prickly – Barry Norman liked to recall that they almost came to blows after an interview that he found frostily monosyllabic. So it was quite a coup for this year’s London Film Festival to get the great performer to BFI Southbank for a Screen Talk, taking questions from writer Ian Haydn Smith as well as the public audience.

There were ums and ahs, and it was clear from the appearance that De Niro is a man who likes to express himself through body language and his work rather than wax analytical. That was indeed one of the pleasures of being present for the talk – seeing that famous upturned smile and tight-cheeked laugh in a real-life situation, rather than as part of De Niro’s dramatic repertoire. And indeed he did smile, seemingly in joy and wonder, at seeing clips from his movies projected.

The impression one took from the event was that De Niro is not standoffish, just a matter-of-fact, nuts-and-bolts professional, right to the motivation of his craft. Asked why he ended up doing more film work than theatrical, De Niro said, “Movies I preferred doing, and I gravitated towards them… I like the fact you can shoot them and they last forever.”

Asked if it was the process or the end result of a performance that gave him a kick, he answered, “It was a combination of all those things, really. Seeing how something would be put together after all these pieces would be assembled on a movie. Does that make sense?” 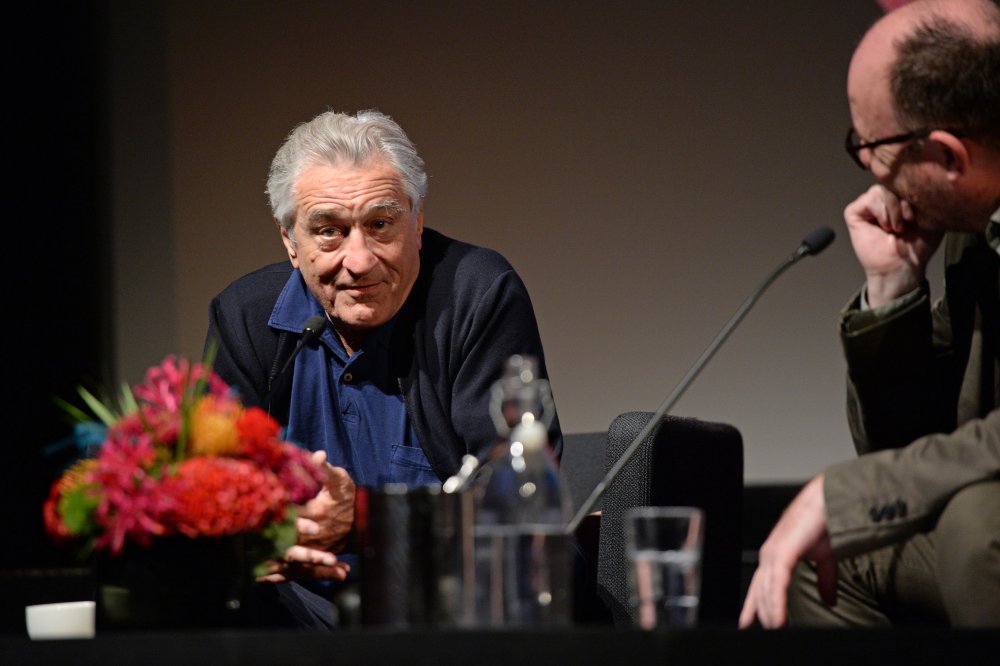 Commendably, Smith covered a lot of ground, including on how De Niro got to know Martin Scorsese: “I knew Marty when I was a kid, a teenager, in Little Italy, but we didn’t hang out together. We had mutual friends.”

How he approached playing young Vito Corleone in The Godfather Part II (1974): “Whenever the scenes of Brando were there, we videotaped them, and I took those and I studied those over and over quite a lot. And so I had that, and then whatever Francis would allow, or whatever I would do, I always had those parameters to stay within.”

And how he approaches improvisation: “You’ve been thinking about it, the scene, maybe you say this or that before, whatever, sometimes things come out that you’ve never even planned, or thought of.” 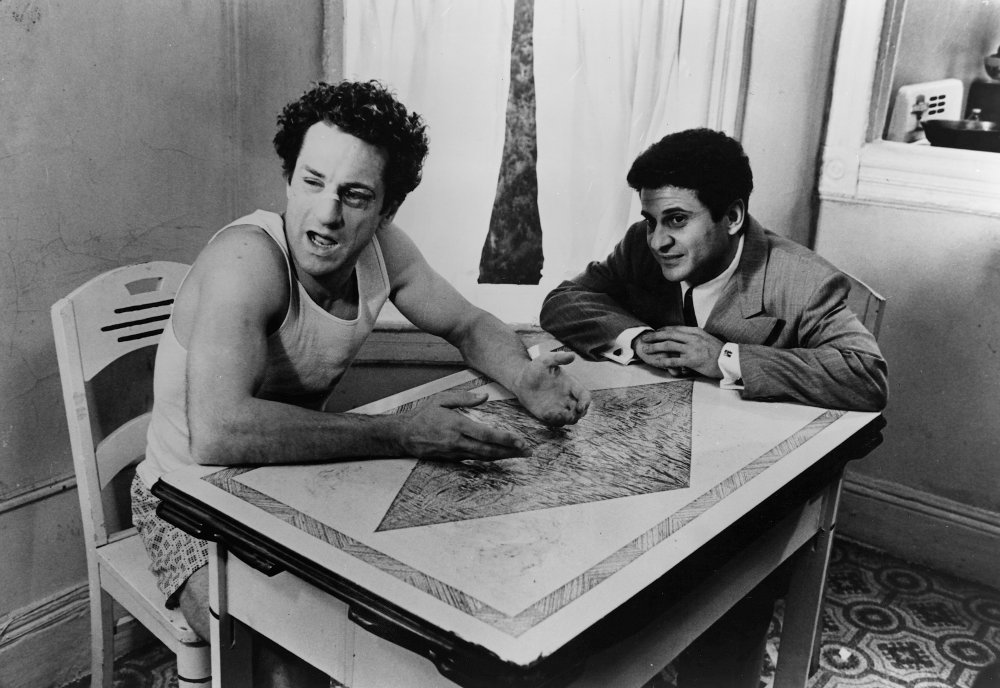 Chiming with the idea of being interested in “how something would be put together”, De Niro got most animated and gave his longest answers talking about the logic of how certain projects were assembled.

For Raging Bull, he recalled, “I had read the book when I was doing 1900 (1976), and somebody, Pete Savage, gave it to me, and I read it and I said, ‘Marty, this is an interesting book. It’s not a great book, it’s not great literature, but it’s got a lotta heart. And it’s interesting.’ There’s certain things I’d like to do, you know, a fighter, and I’ve seen Jake La Motta around New York, he’s very overweight, he’s a bouncer in like a club, and he stands practically right out on the street – you know, when you walk down Broadway, he was in this place. And I just thought the graphic difference from when he was a fighter, and then what he turned into when he got so overweight… there’s something, I thought that would be so strong and powerful.”

De Niro was also very passionate about the projects he has put together as a director. Regarding his directorial debut A Bronx Tale (1993), based on Chazz Paliminteri’s one-man show, he remembered, “I said what’s gonna happen is, they’re gonna buy it from you for a lot of money and they’re gonna tell you you’re gonna play Sonny, and they’re not gonna honour that, really. And then they’re gonna come to me to play Sonny! So why don’t we eliminate that middle step?!” 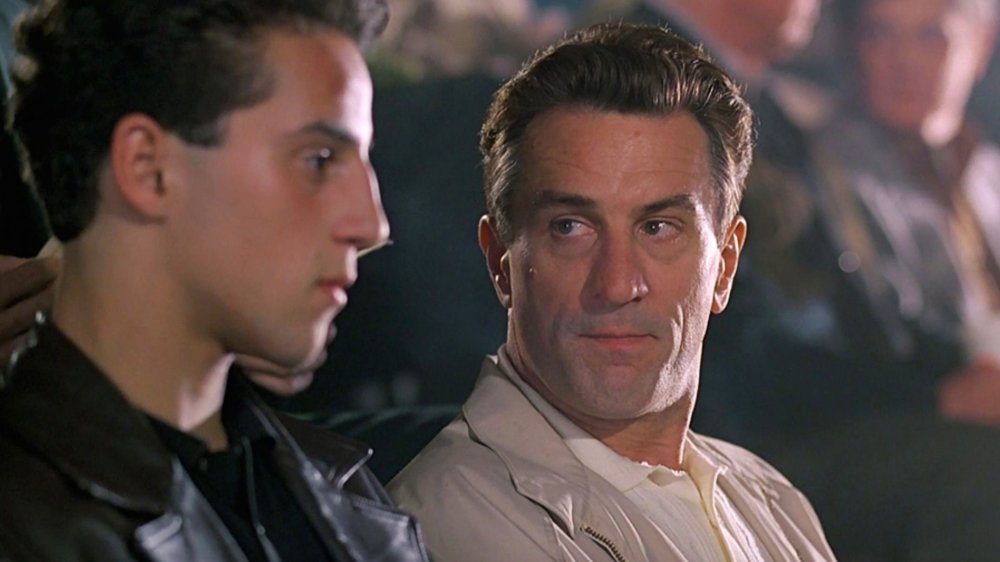 “I enjoyed it, and I enjoyed all the kids,” he recalled of the cast in A Bronx Tale. “Most of them were not actors. I spent a lot of time casting with Ellen Chenoweth, finding kids who were from that world, and knew it, so that when I put them in an improvisational situation, they’d know what to do, even if they were stuck. Even if they were being stuck it would be interesting.”

Fans of The Good Shepherd (2006) may well be glad to know that De Niro confirmed the existence of a longer cut, and said he’d be open to releasing it if the public expressed enough interest.

Fans of De Niro’s recent attacks on Donald Trump will be glad to know that discussing his spy epic led him onto that subject, too: “CIA, KGB, FSB, whatever – there’s always people in the same profession, they cannot tell each other certain things, but if a deal’s to be made it’ll be made. By adversaries. So I just had a bit of a complicity kind of thing with the Russian colonel toward the end of the movie, and Matt [Damon]’s character. Today, everything’s been turned upside down because of Trump, because he’s such a dirty player that… he’s just up-ended it and he’s getting away with it. He won’t get away with it forever but he’s getting away with saying these things about every institution. We have to defend these institutions, plus the fourth estate, the press, because he’s trying to destroy them. And only for one reason, to save himself.” 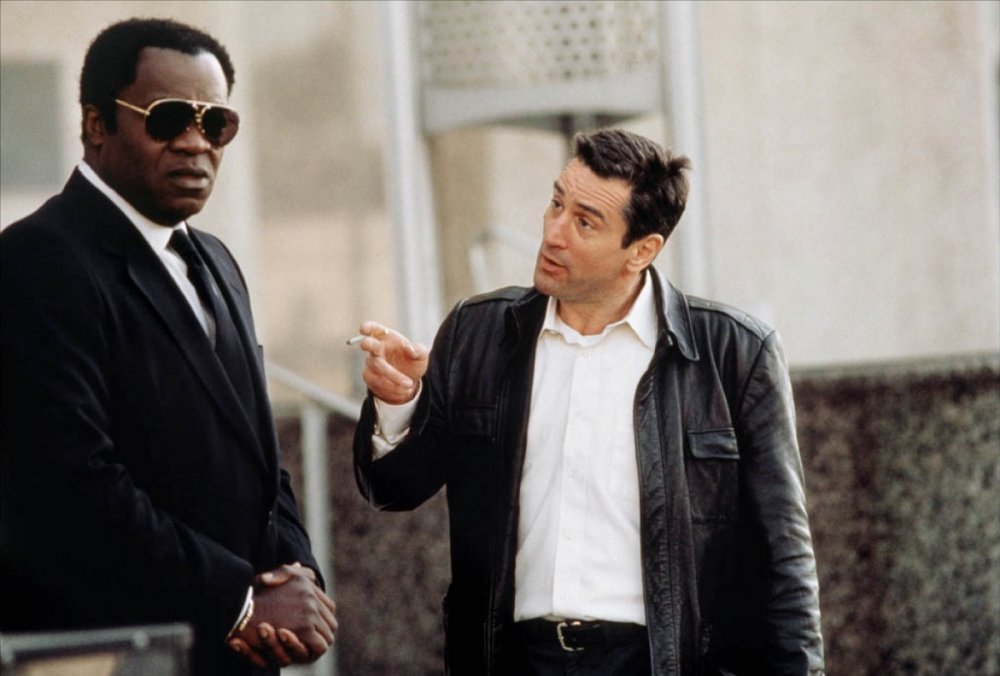 Plenty of today’s critics are sniffy about De Niro’s transition to more comedy work in recent decades, but Smith didn’t shy away from asking about it, particularly praising De Niro’s first out-and-out comedy performance in Midnight Run (1988). “Well, it’s also just what comes your way,” De Niro answered about why he chooses more comic roles these days. “Midnight Run, I wasn’t sure I would be able to do it, I was hoping, and I was putting pressure on my agent to see if I could get it, so I was happy when I did get it.

“There are other things coming along like all the Meet the Parents (2000) and things like that. Analyze This (1999) came because Billy Crystal thought of this idea of me parodying myself. I said yeah, let’s have a reading, and let’s see what it is, you know. We had a reading, and I wasn’t crazy about the first reading. We did it in L.A., and some of the characters that were being pulled into it were not real enough for me. And so, I asked if we could have another reading. And I think we did it in New York, I think. And got characters that were much more… and those are the characters that you see in Analyze This, which gave it more weight, and made it funny, but real funny, funny in a real way.” 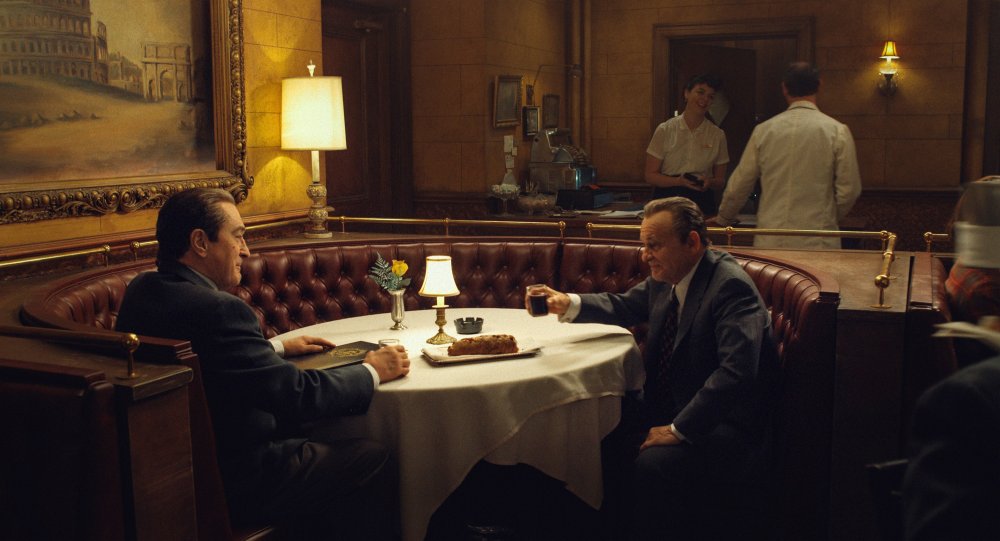 De Niro was of course in town because his new collaboration with Scorsese, The Irishman, was making its UK premiere as the closing night selection of this year’s festival. The Irishman was not much discussed, although De Niro did single out Stephen Graham’s performance as an example of fine work by a younger actor.

And he addressed the digital ‘de-ageing’ in the film as part of a wider question of actors in the digital era: “The technological stuff can only go so far, it’s not going to change other things. And if it does to such a point it becomes something that is not what a person is, what a human is, it could be another type of entertainment. A comic-strip book thing… cartoon stuff, but that’s not people. [The need for people] won’t change, I don’t see how it can change.” 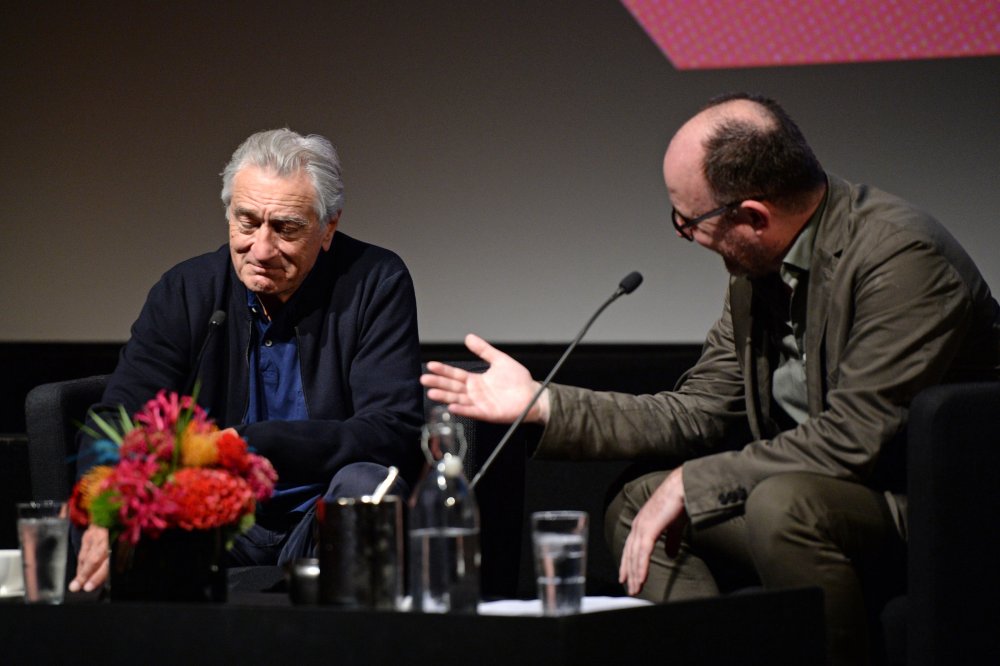 One of the loveliest moments from the audience came when a woman mentioned that her father is a French actor, but what paid the bills in her house growing up was that for 40 years he had been the French dubbing voice for De Niro. She thanked him for his contribution to their lives, and asked if he could record a get-well message for the man, who has been recuperating from multiple surgeries. De Niro agreed and there was a hearty round of applause.