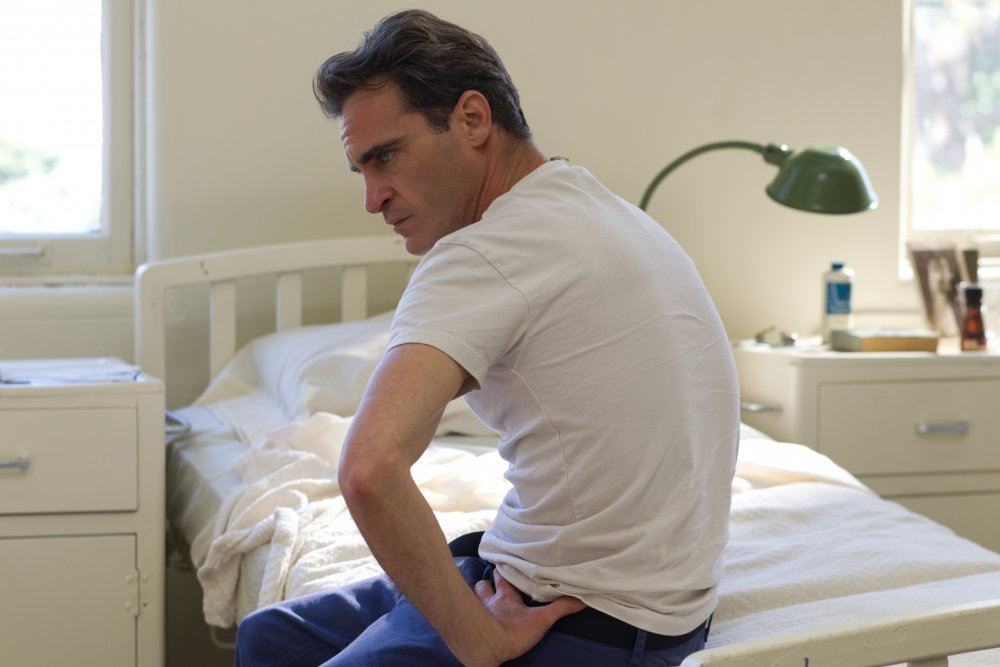 On his second time around as Artistic Director of the Mostra Internationazionale D’Arte Cinematographica in Venice, Alberto Barbera has looked relaxed, suave and genial every time I’ve seen him. Perhaps that’s because this year’s programme has held up very well compared to those of his predecessor Marco Müller, despite an efficiency cutback in the numbers of films and the impression (one that I can’t confirm yet) that Venice is not so well attended this year by the international press.

The headline films of the competition, such as Paul Thomas Anderson’s The Master, and Terrence Malick’s To the Wonder, had all the must-see value necessary for the festival to hold its place in the autumn parade of Venice-Telluride-Toronto-San Sebastian-London, and this despite Müller having gone to Rome and come out fighting for premieres.

Venice always feels a little scattergun in terms of quality and I’d put this year’s level somewhere above the average for the Müller years. The first few films I saw were more about standout moments than complete satisfying works. 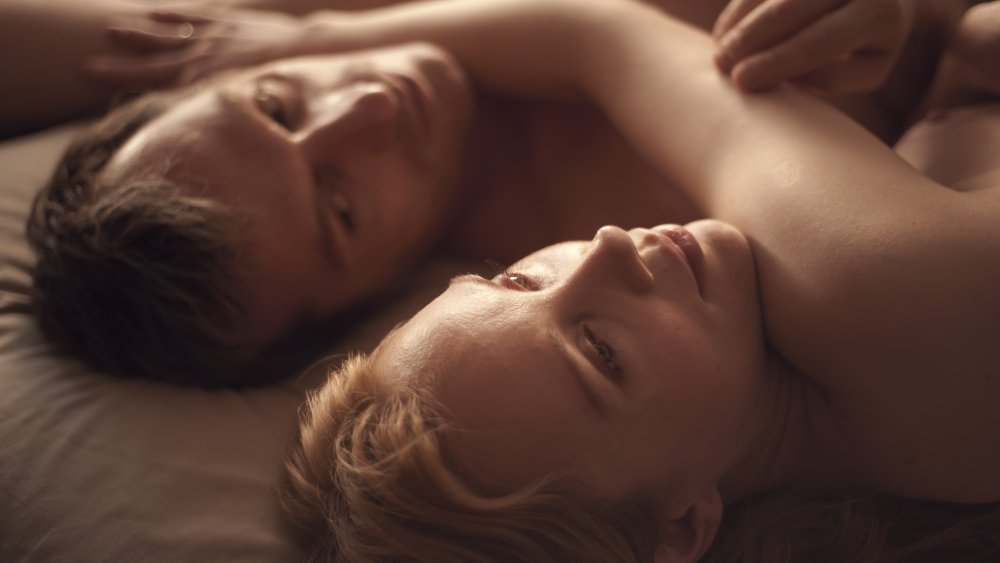 For instance, for an hour Kirill Serebrennikov’s Bertrayal (Izmena) dazzled as an inventive attempt to take an unnamed cuckolded man and woman (respectively Dejan Lilic and Franziska Petri) and turn them into adulterers themselves cheating on second spouses, having rid themselves of their original ones.

One scene in which the man confesses murder to a severe, near-silent woman police detective is pure class – the look of lofty disdain in her eyes is priceless. Eventually, however, the director’s need to be constantly stylish – borrowing from Hitchcock, Lynch, Wong Kar-wai et al – becomes wearying as his characters reverse the usual journey from cipher to character.

Marc-Henri Wajnberg’s patchy but winning drama-doc Kinshasa Kids features child outcasts thought to be witches. It transcends the limitations of its collaboration with the kids when they’re seen to wander into a haunting orchestral performance of Haydn. I felt the hairs on the back of my neck bristle. 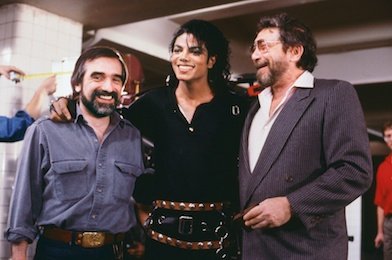 Spike Lee’s Bad 25, a hugely enjoyable celebration of Michael Jackson’s career focusing on the Bad album, revered not only the Prince of Pop but all those around him who had helped him achieve the tracks and dance routines that made him so crucial to the 1980s.

Lee’s decision to make a montage of the moments when each member of Jackson’s team recalls his death slightly cheapens what he achieves through his own palpable enthusiasm. I blubbed myself, however, and was saved from being nauseated by Lee’s cheesier moments by the memory of Jarvis Cocker dropping his trousers during the notorious live performance of ‘Earth Song’ at the Brit Awards. Still, Bad 25 shows that Jackson’s demise really is heartbreaking when you recall how brilliant a singer and dancer (and businessman) he was. 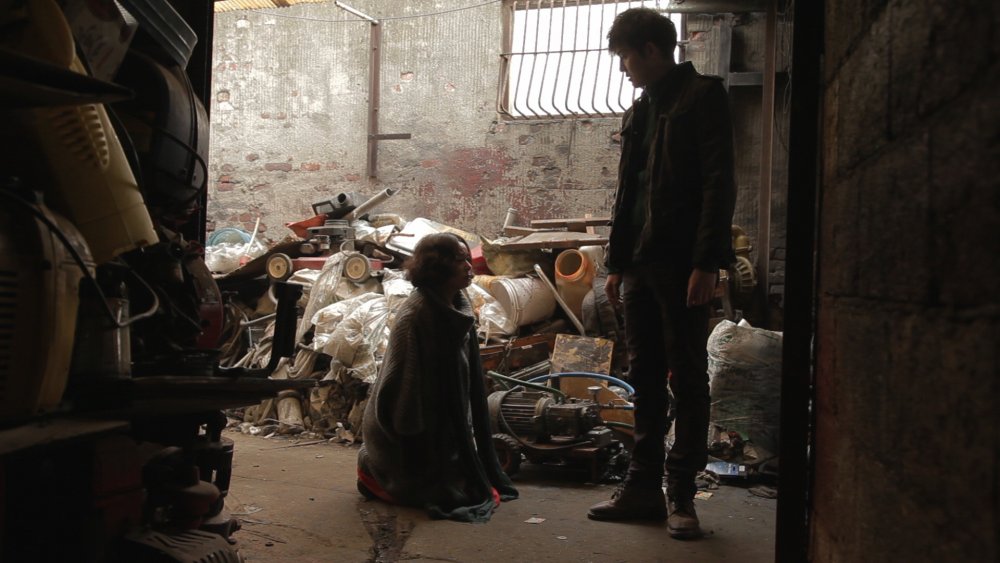 By the end of the first weekend we’d seen some more concrete triumphs. Part two of Ulrich Seidl’s Paradise trilogy, Faith, was much more fascinating than the first (Love). It concerns Anna Maria (the sister of Love’s protagonist), who has become a self-flagellating Catholic zealot perhaps because (it is suggested) her Egyptian Muslim husband survived an accident.

At first she’s alone, taking a vacation from an office job to visit immigrant homes and preach redemption to them using statues of the virgin. Then her wheelchair-using husband returns, it seems, to torment her further.

Seidl’s comedy is blacker and more grotesque than ever here, daring us to laugh at the farcical war that results in the husband having to move about without his wheelchair and his strategies to force sex from his wife. The director’s control of his aesthetic of discomfort is absolute.

Religion under heavy manners was one of Venice’s sub-themes this year. Regrettably I missed the highly regarded Israeli film about arranged marriages, Rahma Burshtein and Yigal Bursztyn’s Fill the Void, but I did catch Haifaa Al-Mansour’s Wadjda, a clear-eyed portrait of a cheeky pre-teen girl growing up in Saudi Arabia who desperately wants to own a bicycle so she can race the boy who lives next door, even though girls in that country aren’t suppose to ride bikes. A shining feature debut this, said to be the first ever made by a Saudi woman. 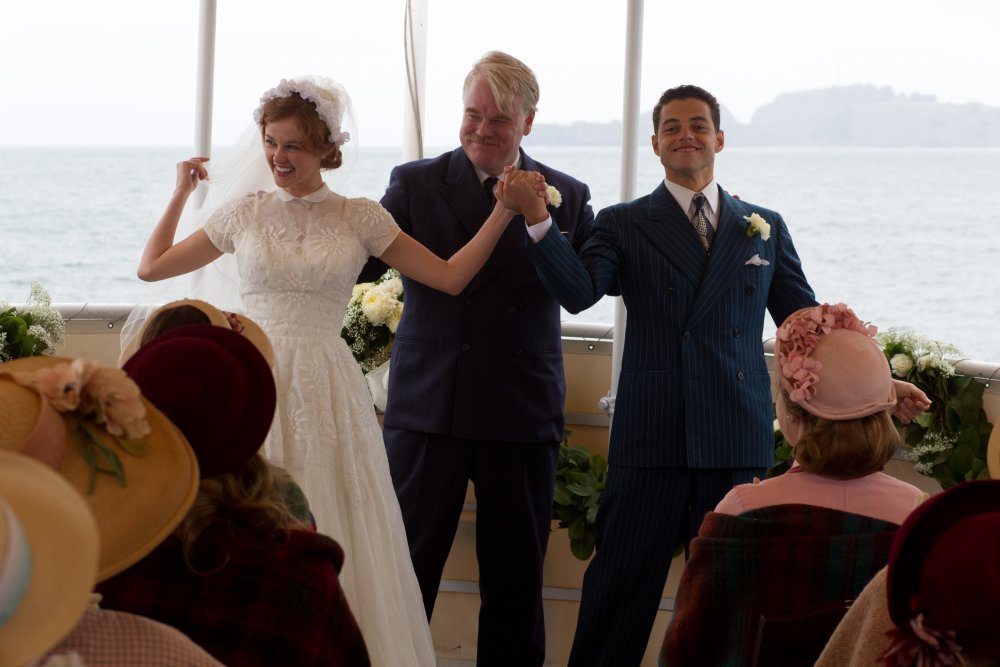 To get a flavour of what Paul Thomas Anderson’s intense The Master is like imagine a violent Montgomery Clift coming under Orson Welles’s wing in a 1950s of washed-out colour, or a wild mountain moonshiner palling up with a Goldman Sachs broker to discover the meaning of identity. What we see is that Freddie Quell (Joaquin Phoenix), a post-traumatic ex-Navy veteran from World War II sneaks aboard a ship and meets international cult huckster Lancaster Dodd (Philip Seymour Hoffman) and they become friends over Quell’s hooch recipe.

There’s not enough space here to do more than indicate the wealth of ideas, images, inferences and influences ricocheting around in this complex study of a power-struggle bromance between cod-psychology and instinctive behaviour. But I can say that’s it’s a screen-acting masterclass and probably the most impressive American film I’ve seen since There Will Be Blood. 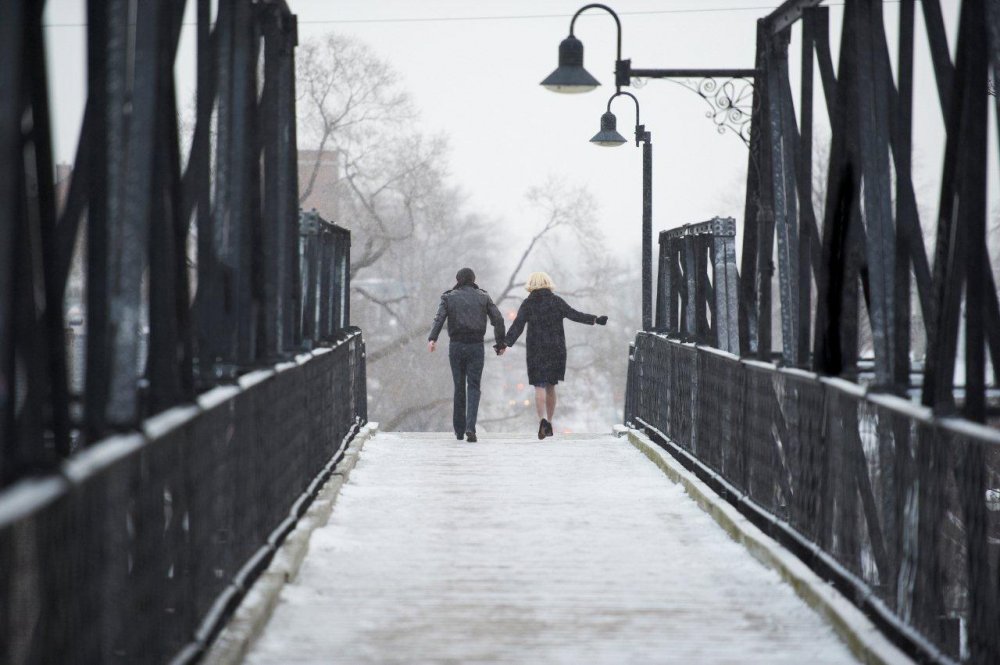 Sarah Polley’s intricately structured autobiographical drama-documentary Stories We Tell has enough panache and reveals to rival Welles’s F for Fake, though the veracity of her film is not in doubt. It begins with a paean to her actress mother Diane but, as it digs ever deeper with multiple recreative techniques, it increasingly becomes more about Sarah’s mysterious progeniture, with several candidate fathers involved, and has even more to tell us, by the end, about how we describe our lives.

If the festival had a main recurring theme it was children abandoned by their mothers. Kim Ki-Duk’s violent Pieta took on the most extreme form of this with its portrait of a psychopathic young man who collects debts for a mobster and who forces those who can’t pay to maim themselves with industrial machinery. One day a woman turns up claiming to be his mother. She endures his brutal denial of her until he becomes convinced she’s real – but is she really?

Colourless and relentlessly sensational in its approach, Pieta intrigued me anyway, and it won sustained applause from the press corps. I got more pleasure, though, out of the three episodes I saw of Kurosawa Kiyoshi’s television series, Penance. In the set-up episode, three schoolgirls in a Japanese town gain a new schoolfriend when the new factory boss’s daughter comes to school.

In the deserted playground one evening, a strange man approaches the four girls and insists that the rich girl goes with him alone. Soon the three remaining girls find she’s been killed, and none of them can remember what the man looked like, so the dead girl’s mother tells them they must all do penance in some ways when they’re adults.

Each subsequent episode deals with one of these penances, and they are elaborately cruel and unusual as only Japanese fiction can be. Think Twin Peaks-lite meets Park Chan-wook and you’re close to the fun this series offers abundantly. Would that Kitano Takeshi’s dismal Yakuza board meeting drama Outrage Beyond had one scintilla of its wit or originality, but those qualities sadly seem to have deserted the once great director. 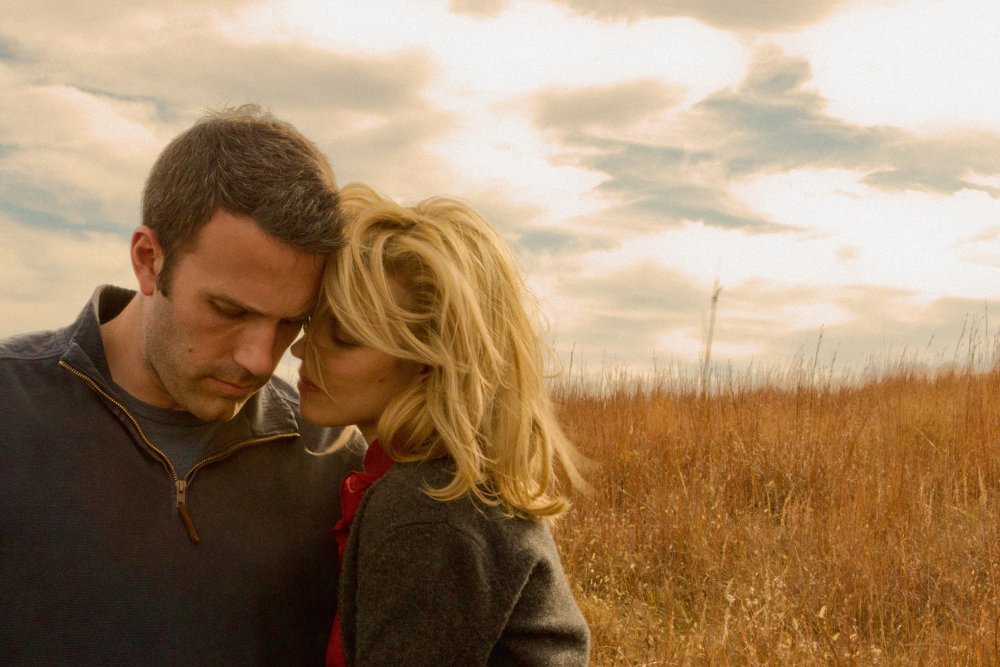 I never thought I’d find myself trying to describe a Terrence Malick film I really loathed. It’s not that the visuals of To the Wonder are any less dazzling than those of his other films, though the overall aesthetic does lean too far towards the tidied up naturalism of National Geographic magazine – in this case applied most often to the Oklahoma magic hour. It’s more that I couldn’t care less about the people he’s chosen to study, perfect examples of God’s creation only if God likes fashion and interiors magazines.

Ben Affleck is Neil, a say-little hunk who brings Parisian beauty Olga Kurylenko and her daughter out to a mid-west housing project that looks like the present-day versions of the 1960s homesteads we saw in The Tree of Life, where the two girls endlessly pirouette through the tall grass bathed in orange rays.

Despite the many breathlessly beautiful shots and super-elegant camera moves, and the interior monologue speculations that seem, regrettably, to have become Malick’s version of speaking parts – particularly for Javier Bardem’s lonely priest – the film seems like an endlessly repetitive fashion shoot combined with preachy meditations on why ‘the love that loves’ isn’t more visible or obvious. Yep, I realise now, I loathed it. 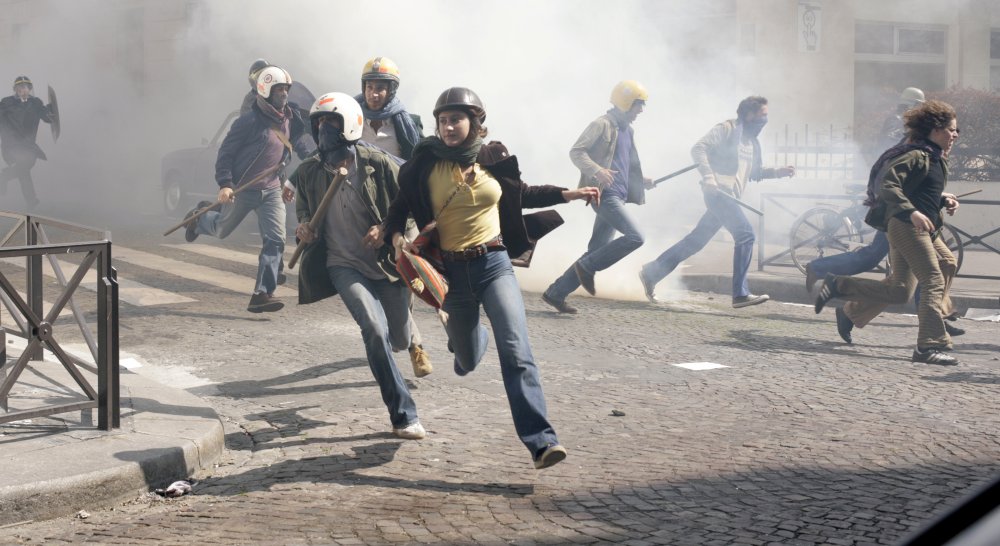 Fortunately Venice had a recompensing surprise up its sleeve in Olivier Assayas’s Something in the Air (Après mai). Before seeing this lovely, lively evocation of the late 1960s and early 1970s seen through the eyes of a high school student, I would have said the prospect of another French film about the post-68 years was anathema to me. But Assayas’s study of the pull between extreme activism and extreme hedonism in that generation is never sullen or pouty, it’s more action-packed and feels authentic.

Assayas never nudges the viewer, he always presents the politics as concrete and unassailably the way it was, yet every scene oozes natural charm, and the cast are terrific. Though I’m pretty sure the Golden Lion will go to The Master, I wouldn’t complain if Assayas won it instead.