Disrupting the director: when an auteur meets the Method

What do you do with an actor who refuses to take direction? Marlon Brando was too wild for Stanley Kubrick, whereas Arthur Penn built The Missouri Breaks around his performative anarchism. But perhaps Kubrick had already learned the lesson working around Peter Sellers on Lolita? 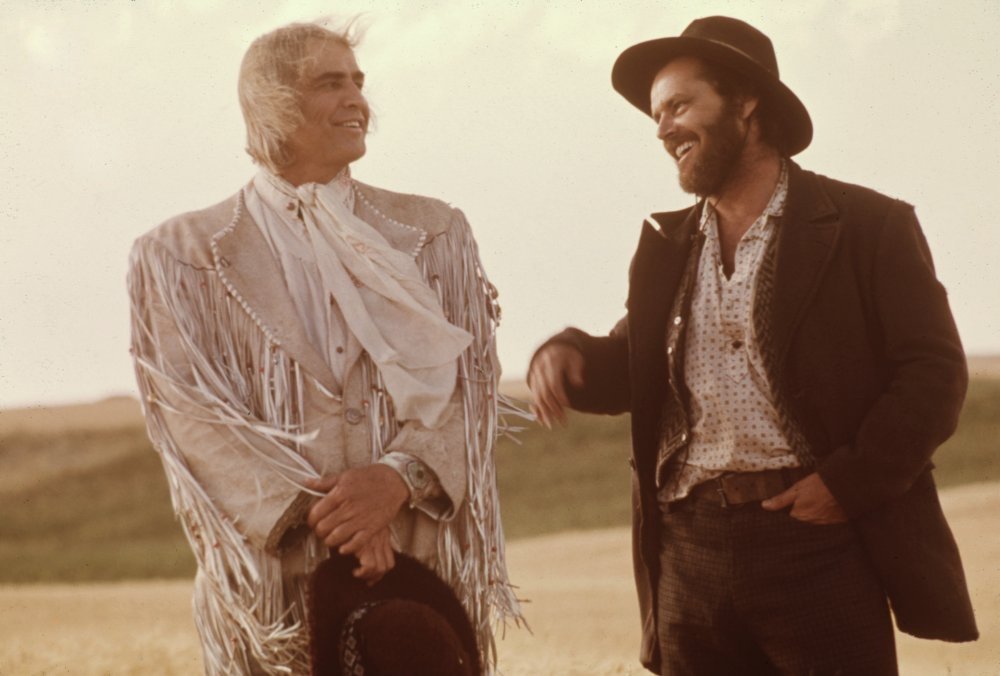 The Missouri Breaks is available on DVD and to stream from Amazon and iTunes.

Lolita is available on DVD, Blu-ray, and to stream from Amazon and Rakuten.

Lolita screens at BFI Southbank on 2, 7, 16 and 23 April 2019 as part of Kubrick, a two-month retrospective of the director’s films.

Yet the relationship between auteurs and method actors is not always so harmonious, with examples of filmmakers falling out with their lead players being more than plentiful. Even Stanley Kubrick once found himself in this position when he began preparing a western, The Authentic Death of Hendry Jones, in which Marlon Brando had been cast as a character based on Billy the Kid. Unable to see eye-to-eye with his more powerful colleague, Kubrick was dismissed from the project, and replaced in the director’s chair by Brando himself. The result was eventually released under the title One-Eyed Jacks (1960).

Arthur Penn, who had made his own Billy the Kid western, The Left Handed Gun, in 1958, enjoyed a more amicable association with Brando when they worked together on The Chase (1965), whose conflicts were limited to those between the director and that traditional representative of a ‘system’ inimical to artistic whims, the producer. Penn and Brando were reunited a decade later for The Missouri Breaks (1976), a revisionist western in which Jack Nicholson played Tom Logan, an outlaw turned farmer who comes into conflict with sadistic regulator Lee Clayton (Brando).

It would be misleading to imply that Brando simply allowed himself to be used here as his director saw fit. On the contrary, like the character he is playing (who refuses to follow the orders of his employer, the rancher Braxton), Brando apparently went out of his way to impose his personality on the part as written (Thomas McGuane’s screenplay depicted Clayton as a straightforward religious fanatic), adopting a different persona, and even a different accent, in virtually every scene. What distinguished Penn from Kubrick was his willingness to accept these extemporisations, to structure the work in accordance with Brando’s ideas, to let being ‘replaced’ by his star serve as a beginning rather than an end. 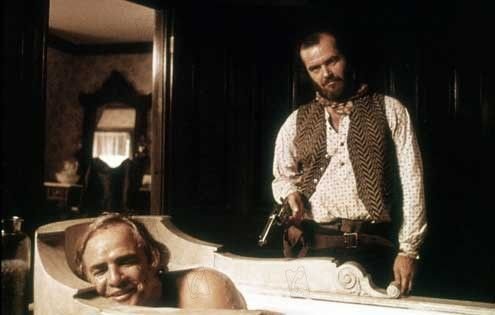 In auteurist terms, it is easy enough to see how the film relates to Penn’s previous features, which focused on conflicts between young men whose energies resisted being shaped or controlled, and father figures whose attempts to give these energies some direction were viewed ambivalently (in The Miracle Worker, the characters are a young woman and a mother figure). On the surface, The Missouri Breaks seems to fit this pattern, with Tom Logan as the rebellious son opposed to Lee Clayton’s castrating father (whom he eventually kills).

Yet Penn’s responsiveness to Brando ends up undermining the structure, not so much erasing it as inflecting it in a different direction. Lee Clayton may well represent authority, but Brando’s anarchic behaviour ends up giving his character precisely that unpredictable aimlessness usually associated with Penn’s more youthful individuals. Technically, Nicholson’s Logan is the film’s protagonist. But with Brando functioning as both castrating father and rebellious son, Nicholson, despite appearing in far more scenes, is rendered superfluous, a danger of which Penn was certainly aware. Indeed, this superfluity ends up becoming the key to understanding The Missouri Breaks, for once Clayton makes his first appearance 36 minutes in, Logan’s main concern becomes finding his place in a world (or a structure) where he no longer has any particular reason to exist.

The central scene has Logan confronting Clayton while the latter is taking a bath. What we have here is not simply a conflict between two characters, or between a patriarch and an ersatz son, or even (though this is closer to the truth) between two actors, but rather between two modes of performance, two concepts of identity. For Logan, identity is set in stone; he is one person from beginning to end, and when he threatens Clayton, he does so with a solemnity that evokes a long tradition of western heroes. But Clayton belongs to a quite different tradition, one in which identity is in a constant state of flux and ‘acting’ involves a great deal more than meticulously following the lines in a screenplay.

In terms of narrative logic, there is no reason for Logan not to simply shoot Clayton (as he will prove during their final confrontation, he has no problem whatsoever with killing an unarmed and defenceless man); what prevents him carrying out such a decisive action is Clayton’s refusal to take the situation seriously, to stick to the script that exists in Logan’s head, to act in a fashion appropriate for a man who is about to die. The scene ends with Logan stalking out of the room after insisting “You ain’t even there”, a remark that, while overtly contemptuous, serves as an accurate testimony to Clayton’s performative skills. For how can you kill somebody who is not even present, who refuses to stay in one place long enough to be defined? The solution eventually settled on by Logan is to slit Clayton’s throat while the latter is fast asleep, and thus incapable of playing those improvisational games which hitherto rendered him invulnerable. 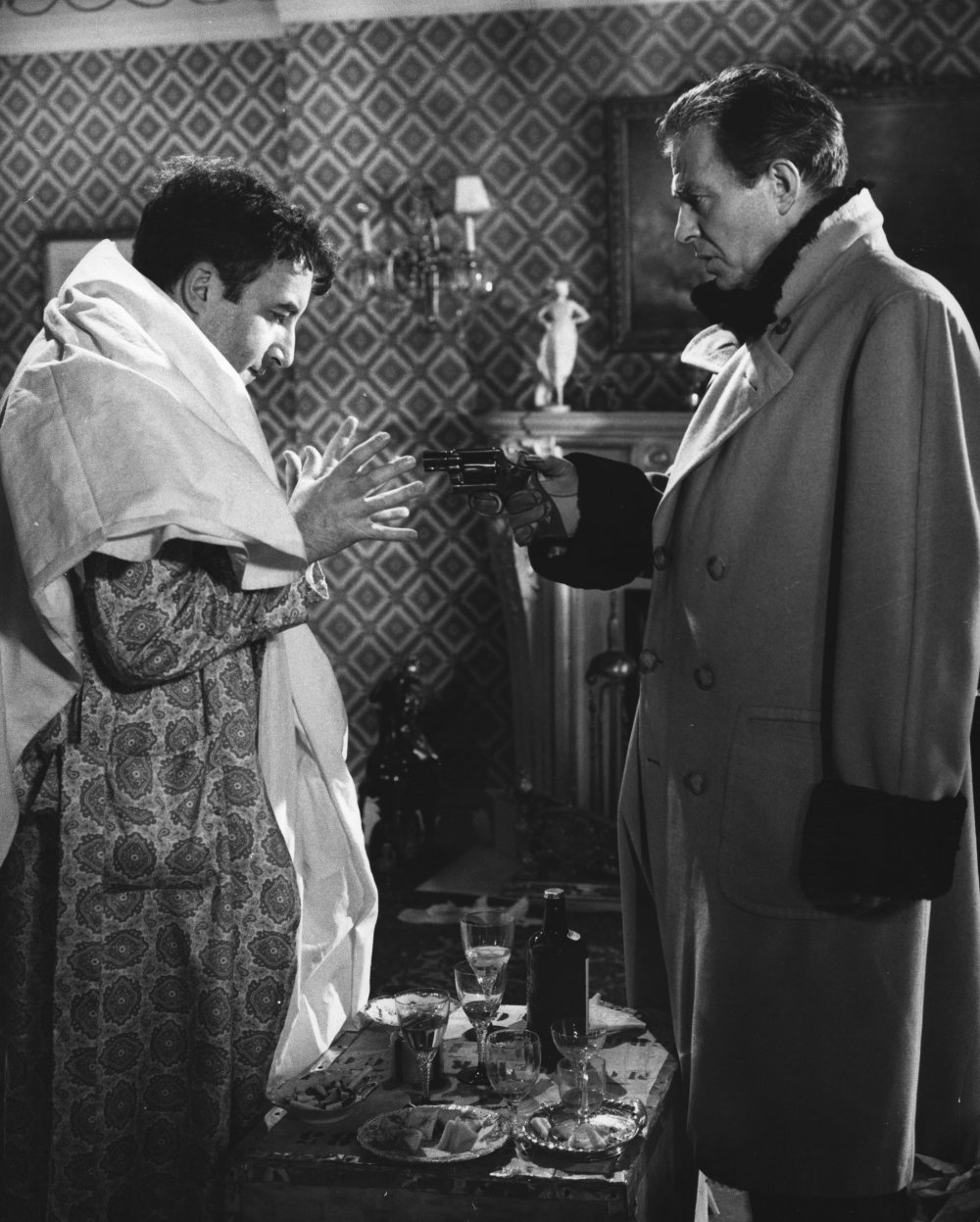 Which brings us, neatly enough, to Lolita (1962), the film Stanley Kubrick made a few years after his collaboration with Brando dissolved. Lolita also paired Kubrick with a notoriously unpredictable star who insisted on improvising, Peter Sellers. But Sellers’s disruptive nature is part of Lolita’s overall design, and one wonders if Kubrick’s feelings about being rendered superfluous by Brando were channelled into James Mason’s Humbert Humbert, who also finds his schemes thwarted by an anarchic associate who refuses to take direction. As in Penn’s film, an unruly improviser, Sellers’s Clare Quilty, is opposed to a conventional role-player.

The opening scene, showing Humbert confronting Quilty in the latter’s deserted mansion, anticipates The Missouri Breaks’s bathroom confrontation. Like Tom Logan, Humbert has clearly worked out this scenario in his mind – and not just in his mind, for he has actually written his opponent’s dialogue on a sheet of paper. But, like Lee Clayton, Quilty refuses to treat his gun-wielding intruder’s demands with the gravity they theoretically deserve, instead using the text he has been handed as an opportunity to launch a series of improvisations in which he satirically comments on the words he is being forced to say (“That was getting kind of smutty there”) while doing an extremely broad imitation of Walter Brennan.

Sellers’s American accent seems about as authentic as Brando’s Irish one in The Missouri Breaks, and when he is eventually reduced to pleading for mercy, he does so in a manner which suggests less that he is genuinely in fear of his life – for what would being in fear of one’s life mean when that life is so wispily insubstantial? – and more that he is participating in a comic sketch on the theme of a man begging somebody not to kill him (the things he promises Humbert are patently absurd).

Quilty, like Lee Clayton, “ain’t even there”, and just as Tom Logan can only dispatch his enemy while the latter is sleeping, Humbert cannot pull the trigger until Quilty has crawled behind a painting. The fatal shot is fired into the canvas, Humbert taking out his frustrations on that surface image which is all he has, or ever will have, access to.

Related to Disrupting the director: when an auteur meets the Method