Three to see at LFF 2014 if you like ... Indian and South Asian cinema

Three gems to look out for at the BFI London Film Festival if you’re a fan of movies from South Asia. Programme advisor Cary Rajinder Sawhney gives his personal choice of a striking new film from an established director, a brilliant debut, and a wild card to take a chance on.

This tightly scripted and confidently directed courtroom drama is set around a prosecution case in a town in the central Indian state of Maharashtra: a folk singer is charged with inciting the suicide of a worker with his inflammatory lyrics. A subtle and fascinating exploration of modern India emerges, as the seeming stability and order of a court system with its basis in the Raj era is pitted against the values of a rapidly changing India.

Mumbai-based writer-director Chaitanya Tamhane is an English-literature graduate who has won several awards as a playwright and director. Previous works have included the feature documentary Four Step Plan (2006) and the short film Six Strands (2010).

With its fixed-camera framing and dispassionate storytelling, Court creates a mood of impending threat and even danger. The traditions of everyday Indian life are embodied by the ultimate authority of the courtroom, but this authority is up for grabs. In a single court case we see multiple political and cultural identities competing: from local versus national government interests, through to the lives of the two clashing barristers. One lawyer champions western freedoms and ‘modern’ values, while his prosecuting counterpart powerfully argues for a more religious and moral stance.

Labour of Love is a beguilingly simple tale set within the crumbling back lanes of Kolkata. A man carries out his domestic routine in his small apartment, surrounded by handed down Victorian furniture and everyday objects. The world he experiences from his window is comprised of street sounds and obscured views. But as the story unfurls we realise that he is not the only one who inhabits this apartment. A woman also lives there, but through the hard toil of their lives the couple co-exist on opposing work shifts. Their love strongly binds them, but they are only truly together in their dreams.

The enigmatic debut filmmaker Adityavikram Sengupta describes himself as a full-time painter, illustrator, graphic designer and animation artist, and a part-time magician. He is a graduate of India’s National Institute of Design. Star Ritwick Chakraborty is an award-winning actor in Bengali theatre, television and films, including Shabdo (2014), which won him a Filmfare East best actor award.

This is a sublime debut feature that evokes the legacies of Bengali masters like Satyajit Ray and Ritwik Ghatak. In spite of its modern storytelling style and editing, from its opening scene – with a pan down a broken exterior of a Kolkata house accompanied by folk flute music evocative of Ray’s Pather Panchali (1955) – it connects us with the rich cinematic traditions of Bengali and European art cinema. The cineaste and the truly romantic at heart will be gripped. 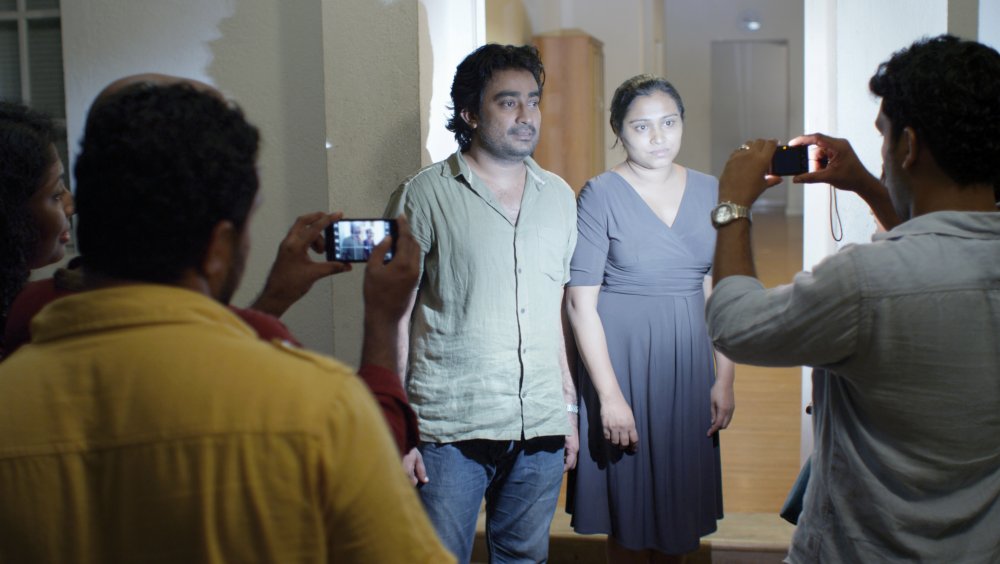 Housewife Dinithi fusses over her architect husband Sachinthra as he leaves for the office. He cold shoulders her and secretly hides her mobile phone in a cupboard. Later that night, a huge chasm opens up between the two as Dinithi asks for her mobile. It transpires that Dinithi has had an affair and the more she begs for forgiveness the colder Sachinthra behaves. It is clear that for Sachinthra trust has been severely damaged and their relationship threatens to spin out of control.

Director-producer-editor Malith Hegoda shot his film on a micro budget in company with a group of filmmaking friends, who put in their own personal cash.

This is something truly fresh from Sri Lankan cinema. Malith Hegoda presents a brutally honest and gripping examination of the breakdown between an urban Singhalese couple, exploring the moral and emotional dilemma of betrayal within a marriage.

The character set up and acting is truly riveting as the age-old drama of a couple being torn apart by infidelity is played out. Though it might have seemed voyeuristic, Hegoda’s viewpoint remains sensitive and we are forced to empathise with these flawed characters and their struggle for a future.