The 2014 BFI Statistical Yearbook shows UK film is a leading player in a highly competitive global industry, with a UK industry turnover of £7.3 billion, an 11% share of the global box office, UK box office receipts in excess of £1 billion for the third successive year, and over £1 billion of production spend at home on new films shooting in the UK. 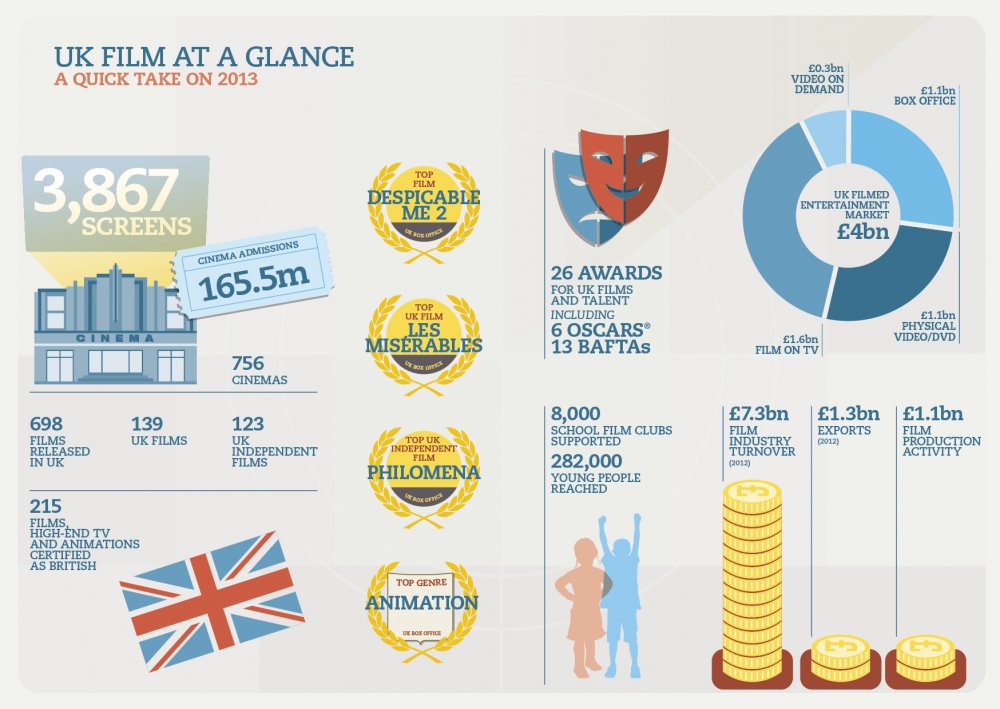 Today’s figures reveal that the UK film industry continues to be not only one of the world’s greatest providers of cinematic entertainment, but also a massive driver of economic growth. With film production spend up almost 30%, and box office takings of more than £1 billion for the third consecutive year, the industry is thriving and we will continue to support this dynamic sector.

It is a very vibrant and buoyant picture for UK film. The Government’s solid commitment to the screen industries combined with our fantastic talent, skills and infrastructure is keeping the UK at the top of its game. Han Solo’s Millennium Falcon currently docked at Pinewood is just one tantalising indication of just how much we remain the destination of choice for international filmmaking. The opportunities for growth in film, high-end television, animation and games are so exciting we need to keep our foot hard down on the accelerator.

Les Misérables was the leading UK film release of the year grossing over £40 million and making it one of the UK’s most successful films since 1989. The leading independent UK films were Philomena (£11 million), Rush (£10 million) and Quartet (£8 million), all of which were a hot ticket for cinema-goers in the 45 years-plus age group. Younger audiences enjoyed a fantastic year at the cinema too, making animation the leading genre at the UK box office – £247 million across 33 releases – and helping Despicable Me 2 to become the biggest grossing film of the year with £47 million. Skyfall, released in 2012 and taking over £102 million, continues to be the UK’s biggest box office success ever. Most films are watched on small rather than big screens, with just under 7,000 titles on UK television last year and an average of 53 film viewings per person in 2013.

With more films released in cinemas than ever before in 2013 (a total of 698, marking an average 13 titles a week), competition for audiences has never been higher, but the range of films available, the ways in which audiences can enjoy them, and the appetite for film viewing continues to grow. The Yearbook reports that distributors are releasing a greater number of specialised films, 446 during the year, earning £110 million at the box office, including foreign language and documentary films. Significant successes include Dhoom: 3, which becomes the first Indian language film to join the ranks of the top 10 foreign language films released in the UK since 2001. Research estimates for community cinemas and film societies also suggest audience growth.

The BFI reports that UK films and talent won 26 major awards in 2013/2014, led by the BAFTA® and Oscar® successes of 12 Years a Slave and Gravity. The two films’ achievements marked a landmark year, with 12 Years a Slave the first film to be made by a Black director to win the Oscar® for Best Film, and Gravity flying the flag internationally for the excellence of the UK’s VFX industry.

Compiled by the BFI’s Research and Statistics Unit, the Statistical Yearbook presents the most comprehensive picture of film in the UK and the performance of British films abroad during 2013. Now in its twelfth year, the Yearbook is a valuable evidence base for industry and policy-makers.

Overall, box office during the calendar year was £1.1 billion, a 1% dip on 2012, which was a record year and notable for the release of the UK’s biggest ever film, Skyfall. Cinema admissions were 165.5 million admissions compared to 172.5 million in 2012.

Six UK/US produced films staked their claim in the top ranking films of the year, led by Les Misérables in third place. In earning £41 million the musical was the leading UK film of the year, becoming one of the most successful British films since 1989, and its performance in topping the box office charts for four weeks was unequalled by any other release in 2013. Despite an increase in the number of 3D films released (46 from 43), takings from 3D films were down overall (£207 million, down from £216 million). However, the second highest grossing British film of the year was multi-award winning UK-made Gravity, which grossed £31 million and was the top 3D release of the year. With 79% of its total gross coming from 3D screenings (as opposed to 21% from 2D), Gravity demonstrated a continuing trend among UK cinema-goers who are becoming more selective in their choice of 3D films, choosing the format for films where it makes a real contribution to their experience but sticking to 2D where they don’t perceive an added value. In a year in which more films were released, yet without the muscle of Bond, UK films took a robust 20% share of the total box office for the UK and Republic of Ireland, with the top 20 releases grossing over £231 million.

Philomena and Rush broke the £10 million marker to become the two highest grossing UK independent films of the year and jump into the all-time top 20 independent UK films. Collectively the top independent UK performers grossed £71 million and a 6% share of the box office compared to 8% in 2012 which was led by The Woman in Black and The Best Exotic Marigold Hotel, both of which spawned sequels which went into production in 2013.

Younger audiences, 7-24 years, accounted for 47% of all admissions in a year in which animation accounted for only 5% of releases, but ran away with 21% of the box office. Comedy accounted for the highest proportion of releases (22%) and 14% of the box office, with the biggest film being The Hangover Part III, and it was also the leading genre amongst independent British films titles. Adventure films took more money per cinema on average across all genres with the most successful being The Hunger Games: Catching Fire.

Significantly British films were the draw for older audiences. A wide variety of genres including musical films, action, drama, sci-fi and romantic comedy were popular with cinema-goers in the 45-54 age range with Sunshine on Leith, Rush and Filth attracting significant above average audiences in that age group. For audiences in the 55+ age group, dramas, biopics and musical films held the greatest appeal, led by Quartet, Philomena and Les Misérables, all of which are, significantly, British films.

Distributors are seeking to bring a more diverse range of films to audiences and are releasing more specialised films – 446 – over the year. There were significant successes with Dhoom: 3 becoming the first Indian language film to join the ranks of the top 10 foreign language films released since 2001 and the first new release to do so since 2007. However, with the top 100 films accounting for 91% of the box office and with live cinema content such as concert films, opera, theatre and ballet, competition for screen time is intense. Creating new opportunities for seeing films is being addressed by the BFI through distribution and exhibition initiatives such as the BFI Film Audience Network and the BFI Neighbourhood Cinema programme.

Film revenue generated by all video platforms, a crucial part of a film’s value chain, was worth £1.4 billion in 2013. Physical video sales fell to 119 million units last year and rentals to 53 million transactions, but combined they generated £1.1 billion with the most popular purchase being Skyfall. Market data on VoD, which enables audiences to access films through a range of devices, anytime, anywhere, is limited but was estimated to be worth £323 million, showing a 37% growth on 2012 and is now 400% higher since 2002. Apple was the highest earning VoD provider in the UK with Netflix the fastest growing provider.

In terms of viewer numbers, television is the single most important platform for seeing films, offering almost 7,000 film titles across all channels and reaching a cumulative film audience of 3.4 billion, 20 times the number of cinema admissions. On average, people see 53 films a year on television.

Up was the most watched film on terrestrial TV with 7.9 million viewers or 12% of the population on New Year’s Day and Skyfall was the top film on pay TV. The most popular UK independent films on terrestrial television were The King’s Speech (2.9 million viewers) followed by The Iron Lady (2.7 million) and The Inbetweeners Movie (2.6 million).

The UK’s international reputation for world-class filmmaking and creative talent remains consistently high. The global theatrical market, which hit a new record in 2013, was worth almost $36 billion with UK films earning $4.1 billion, or a 11.4% share.

UK studio-backed films were a massive engine in generating 9.8% of the worldwide box office in 2013 with earnings of $3.4 billion, but independent UK films played a considerable part contributing over $649 million, or 1.6% of global revenues and achieving an increase of £24 million on 2012. Fast & Furious 6, made in the UK, was the top grossing UK film worldwide with earnings of $788 million. For the first time, the Yearbook has been able to look at the performance of British films in China where UK films earned $266 million and held 8% of the market and Russia where they earned $164 million.

UK story material is enjoyed by audiences worldwide. Of the top 200 global box office successes between 2001 and 2013/2014, 32 films are based on stories and characters created by UK writers, earning more than $23 billion at the worldwide box office.

Nearly two-thirds of the top grossing 200 films internationally since 2001 have featured British talent in leading roles but 2013 broke new ground for the UK. In 2013/2014, the UK collected 26 major awards including 13 BAFTAs® and six Oscars®, however in 2014 Alfonso Cuarón’s Gravity put the spotlight on the quality and expertise of the UK’s VFX industry and Steve McQueen’s 12 Years a Slave was a landmark of creativity and diversity.

The UK film industry continues to be a valuable part of the UK’s creative and screen sector with a turnover of £7.3 billion and a direct contribution to Gross Domestic Product of £2.9 billion – more than twice its 1995 contribution in real terms*. The industry exported £1.3 billion worth of services comprising £792 million in royalties and £550 million in film production services. Exports were 71% higher in 2012 than in 1995 and the UK film trade surplus was £789 million.

Driving this boost in spend were 37 inward investment films bringing international investment into the UK by using its world-class facilities, services and crew. These larger budget films, some of which are produced from the UK, include Far From The Madding Crowd, Paddington Bear, Guardians of the Galaxy, The Man from U.N.C.L.E., The Imitation Game and The Monuments Men and contributed £860 million (up 28% on 2012’s £671 million from 39 films) and accounted for 81% of the total UK production spend.

The number of domestic UK films budgeted at £500,000 and upwards which went into production remained stable with 63 compared to 65 in 2012, including Mr. Turner, Pride, Alan Partridge: Alpha Papa, Mrs Brown’s Boys D’Movie, Starred Up, Sunshine on Leith, The Falling and Nativity 3: Dude, Where’s My Donkey? The combined spend across all domestic UK films was £154 million, a drop on 2012’s £248 million.