The BFI National Archive is pleased to announce that the world premiere of a new restoration of a major British silent film, The Battles of Coronel and Falkland Islands, will be unveiled as the BFI London Film Festival Archive Gala screening, presented in partnership with American Express®. 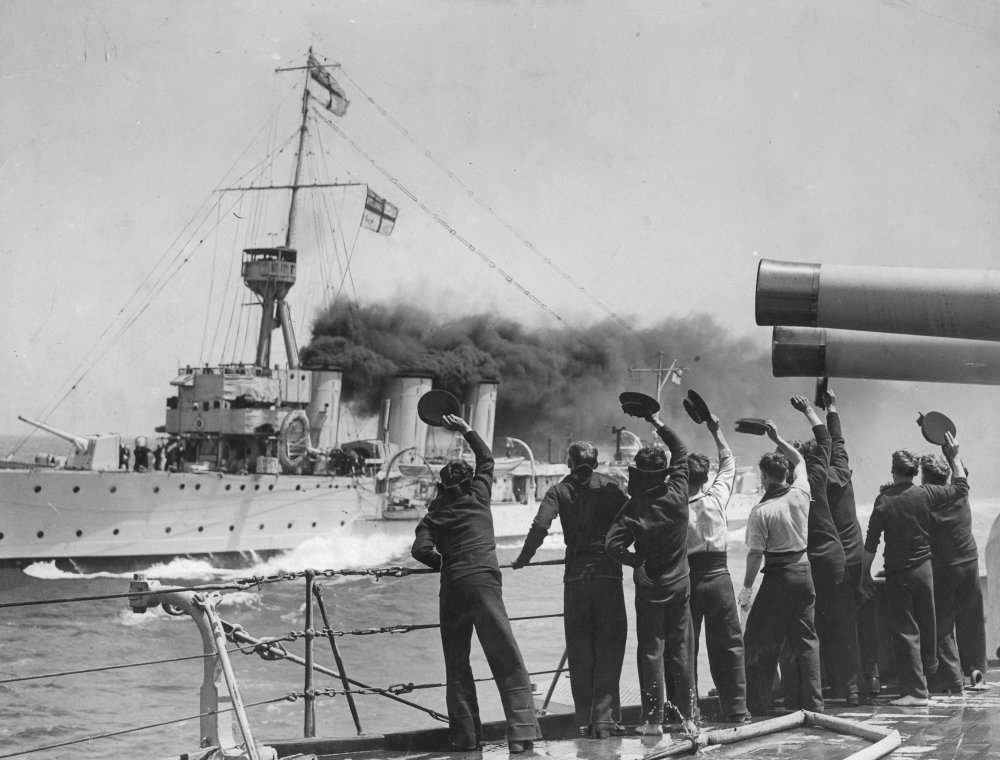 Sailors greet a sister ship on the high seas: The Battles of Coronel and Falkland Islands (1927)

The BFI National Archive is pleased to announce that the world premiere of a new restoration of a major British silent film, The Battles of Coronel and Falkland Islands (1927), will be unveiled as the BFI London Film Festival Archive Gala screening, presented in partnership with American Express®, on 16th October 2014, at the Queen Elizabeth Hall followed by a nationwide release in cinemas, with a simultaneous release on BFI Player and later issued on BFI DVD.

This virtually unknown film offers a stunning recreation of two key battles faced by the Royal Navy in the early days of World War One, almost exactly a century ago. The battle of Coronel took place on 1 November 1914 and the battle of the Falkland Islands on 8 December 1914. The first major engagement between German and British ships at Coronel was a terrible defeat for Britain with the loss of two warships achieved by Admiral Graf von Spee. Later the British responded in a desperate bid to save the morale of a nation at war.

The film will have a stirring new score, commissioned from award-winning composer Simon Dobson, whose previous work includes a musical commemoration of the Penlee lifeboat tragedy. The score will be performed, appropriately, by 24 members of the Band of Her Majesty’s Royal Marines in honour of the 24 members of the band who lost their lives with the sinking of HMS Monmouth at the battle of Coronel.

Directed by Walter Summers, this moving epic of war at sea shows just how the battles were fought. Royal Navy ships were used and filming took place in the open seas around Malta with the Scilly Isles standing in for the Falklands. Scenes of naval warfare have rarely been captured on film with such a degree of authenticity. No models and no trick photography were employed, although some interiors were recreated in the studio. A special screening was held at Balmoral for King George V and critics heaped praise on the film.

This was an age when captains still heroically and tragically went down with their ships, alongside thousands of sailors on both sides who lost their lives.

The Battles of Coronel and Falkland Islands is a thrillingly accurate recreation of the events 100 years ago of the first major battle at sea of the First World War between Germany and Britain. This new restoration by the BFI National Archive will showcase the hugely ambitious filmmaking task set by Walter Summers, a much underrated director, who called on the full resources of the British Admiralty to film using actual battleships. The film was hugely successful in its day and is a fitting memorial to the thousands of sailors who died on both sides.

In the entry on The Battles of Coronel and Falkland Islands in BFI Screen Guide – 100 Silent Films (2009), Bryony Dixon wrote:

It is curious that the film is not better known today, for the filmmaking is astonishingly effective, leading critic C. A. Lejeune to say ‘The Battles of Coronel and Falkland Islands is without question the best motion picture that a British director has ever made’ She also mentioned it in the same breath as Metropolis and Abel Gance’s La Roue and it was, of course, because of the subject matter compared to Battleship Potemkin. Walter Summers’ filmmaking style, like Eisenstein’s, glories in the beauty of the machine – the diagonals of the big guns, the vast scale of the battleships, the fierce industry of the shipyards, the rhythm of feet on the gangplank, the movement of men shovelling coal as the needle on a pressure gauge mounts, the reflected gleam of water on the cabin walls. 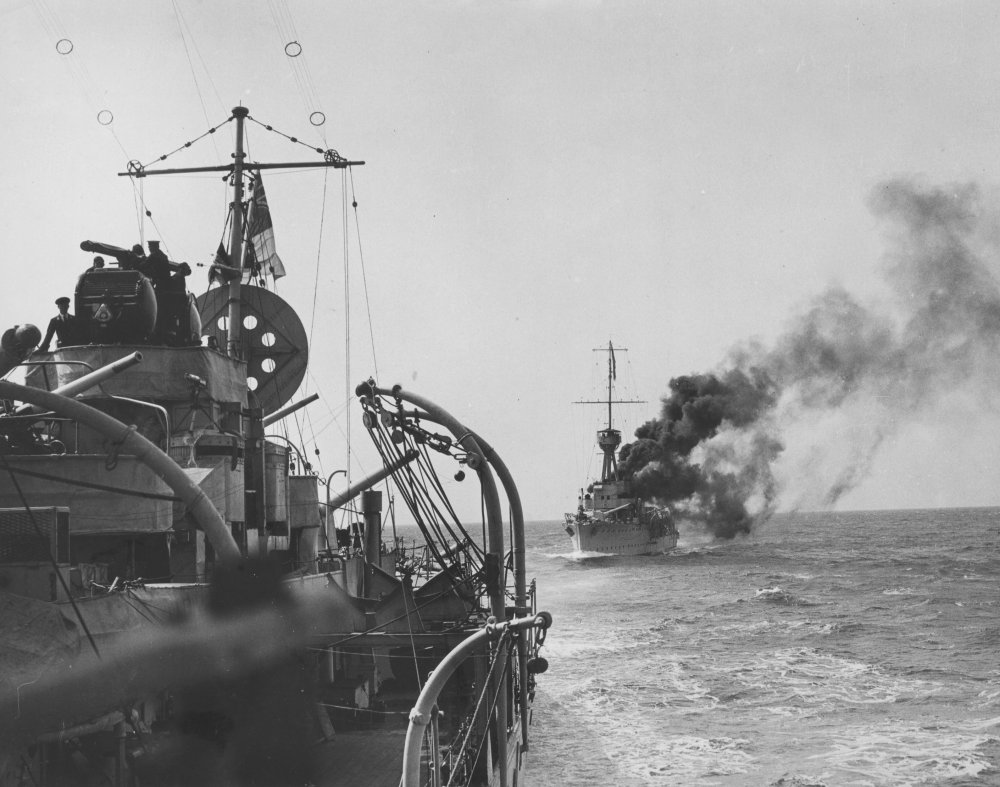 The restoration by the BFI National Archive’s restoration team was undertaken in association with Deluxe Digital. The film had suffered extensive wear and tear during its 86-year history and there was severe damage in some key shots as well as some missing inserts, such as letters and telegrams, which we were lucky enough to be able to retrieve from another copy. The incomplete main titles containing the credits for the producer and director have been recreated from single frames containing a faint shadow, just detectable, on the dissolve from one card to the other.

The original materials were acquired by the BFI National Archive sometime around the late 1940s but the original nitrate negatives decomposed early on. We have worked primarily with a second generation positive copy, and some other later elements which were scanned at 4K resolution. Extensive grading and months of digital restoration with the specialist team at Deluxe were needed to represent the quality of what is a brilliantly cinematic work. The restoration will be offered in digital and 35mm film copies and we will make both a new 35mm negative and digital masters for permanent preservation for the nation.

Composer Simon Dobson was born in 1981 in Cornwall into a family which was deeply involved in music-making. He began composing while still at school and won a place at the Royal College of Music. His best known composition is Penlee, a musical commemoration of the Penlee lifeboat disaster which happened just before he was born; it was shortlisted for a British Composer Award in the Wind Band or Brass Band category in 2009. He went on to win in this category in 2012 with A Symphony of Colours. He is one of the most interesting composers currently working in contemporary music. He lives in Plymouth and performs with a number of different bands including ‘Antimatador and Lazy Habits’.

I am thrilled to have been able to work on this extraordinary film. My music has often been described as cinematic, but this is my first film score and it’s been great working with the Band of Her Majesty’s Royal Marines. I have created a musical accompaniment inspired by the popular tradition of military brass which takes the viewer on an exciting but respectful journey through the dramatic and dark events of the two battles with a suitably engaging and occasionally dissonant score. I have tried to use the full extent of the brass ensemble with a particularly strong use of percussion, bells, and struck metal to create something of the brutality of the sounds of war. I have also used some traditional themes including navy bugle calls but incorporated them in a work which I hope supports the story in a fresh and original way.

The Band of Her Majesty’s Royal Marines

The year 2014 has seen the Band of her Majesty’s Royal Marines performing across the country and oversees in high profile ceremonial engagements in support of the Royal Marines’ 350th Anniversary.

In 1664, when the first regiment specifically recruited for sea service was formed, each company had a drummer who was responsible for signalling. The modern Royal Marines Buglers are the direct descendant of these drummers and therefore hold the distinction of being the oldest specialist branch in the Royal Marines today. The drummers could be ‘massed’ to form a Corps of Drums. Later, with the addition of fifes and bugles, they were responsible for the provision of signals, drum beatings and music on land and sea.

During the First World War, 143 band members made the ultimate sacrifice including the loss of all 24 band members who were on board HMS Monmouth when it sank during the battle of Coronel.

In the Second World War, the Royal Marines formed 84 bands, at one point comprising 1,995 men, mostly from the Royal Naval School of Music.

Famed throughout the world for their immaculate appearance, drill and musicianship, the musicians of the five Royal Marines bands combine military precision and discipline with an artistic interpretation that places them in the top level of musical ensembles.

Royal Marines Bands are required to provide every imaginable musical ensemble including orchestras and dance bands. To achieve this, most musicians, except solo specialists, are required to attain an acceptable standard on both a string and a wind instrument. As a result Royal Marines musicians are regarded as among the most versatile in the military musical world.

The primary role of the Royal Marines Bands is to provide musical support to the Royal Navy and Royal Marines although in times of conflict they may be called upon to provide a wide range of military duties in an operational role – including medical support and Nuclear, Biological and Chemical Decontamination Teams. Most recently ranks from the Band Service have served with 3 Commando Brigade in Afghanistan.

The Band embraces all kinds of music and is capable of performing in many different musical ensembles – including fanfare teams, dance bands, orchestras and various chamber ensembles; in fact almost any familiar musical ensemble. In addition to this, our instantly recognisable Corps of Drums bring movement, colour and a flavour of Ceremonial and State occasions; of which the Royal Marines Bands are an integral part. 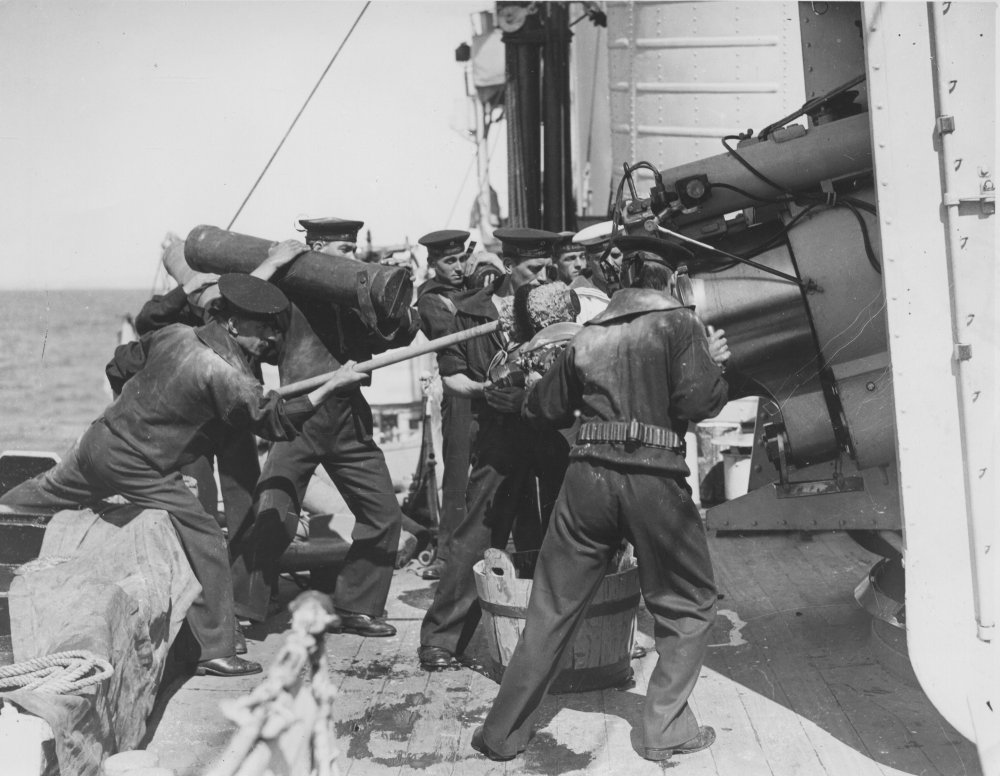 Synopsis: The Battles of Coronel and Falkland Islands (1927)

In August 1914 British and German ships all over the world receive the signal that they are now at war. The German East Asia Squadron under Admiral Maximilian von Spee, cut loose from his base at Tsingtao begins to prey on British and allied shipping with great success. HMS Good Hope, HMS Glasgow and HMS Monmouth under the command of Rear Admiral Sir Christopher Cradock have orders to seek and engage the enemy. HMS Canopus, a warship with superior fire-power and 12 inch guns, is delayed with engine trouble 300 miles away.

On 1 November 1914 in a dramatic engagement near Coronel off the coast of Chile, von Spee’s superior force encounters the British squadron. The engagement reveals the German gunners out-classing their British counterparts and HMS Good Hope is sunk with the loss of Craddock and all men on board. HMS Monmouth awaits her fate and eventually is sunk too by the weight of German weaponry with the loss of her entire crew. HMS Glasgow, unaware of the fate of her companion, manages to escape.

Back in London the nation reels from the shock of their first defeat at sea for 100 years. Admiral Jackie Fisher is determined to launch a counterattack and the speedy re-fit of HMS Inflexible and HMS Invincible at Devonport is immediately underway with orders to sail by 6pm on 11th November – “whether ready or not!” The great battleships leave for the South Atlantic base at the Falkland Islands under the command of Vice Admiral Sturdee, determined to restore British pride and supremacy.