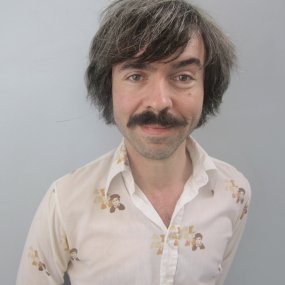 Vic has been at the BFI since 1998, and now works as a Blu-Ray and DVD producer in the video publishing team. From 2006 to 2016 he worked in the curatorial team, researching, developing, exploring and sharing the BFI’s fiction collection. He co-created and co-programmed the BFI Southbank cinema strand The Flipside, has introduced many film shows at BFI Southbank, around the UK, and overseas, has conducted numerous onstage interviews with filmmakers and actors and has curated seasons of cult movies, British B pictures and ‘quota quickies’. He has made presentations on cultural approaches to film curation and programming to students at colleges around the UK, has delivered various papers on film history at academic conferences, and curated and presented a large-scale British horror retrospective at the Karlovy Vary International Film Festival in the Czech Republic.

He was co-curator of the BFI folk film DVD release Here’s a Health to the Barley Mow, as well as Roll Out The Barrel, a collection of archive non-fiction films about pubs and beer. He was the lead curator on an internationally acclaimed project to restore two early Peter Sellers films, and was the lead curator on the BFI’s acclaimed Gothic project. He has written for BFI Screenonline, continues to write for BFI Sight and Sound, and has written for a wide variety of other publications, including DVD booklet essays for the BFI, Arrow, and Masters of Cinema. He has contributed chapters to various books on film including Arrow’s Cult Cinema (2016), and for the BFI Compendia 39 Steps to the Genius of Hitchcock (2012), Sci-Fi: Days of Fear and Wonder (2014), Love (2015) and Who Can You Trust? (2017). He has worked as a producer on many BFI DVD releases, recently including Charlie Chaplin: The Essanay Comedies (2017) and cult classic Beat Girl (2016) and co-curated the launch of the BFI’s Flipside and Children’s Film Foundation DVD series. He’s currently co-writing a book on British film and television history.