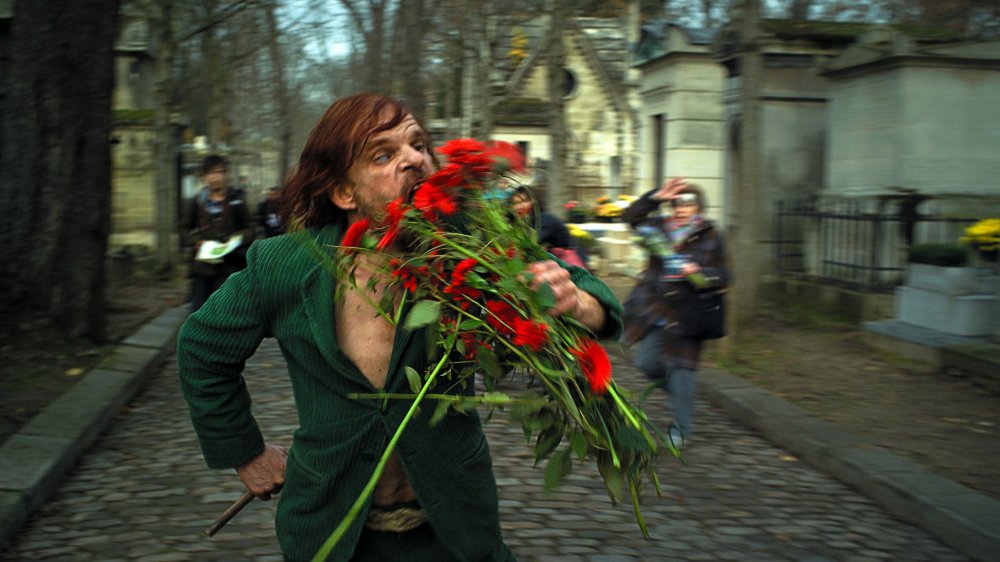 It’s been 13 years since Leos Carax’s last feature-length film, Pola X. When you wait that long for a one-time enfant terrible to show his face, the anticipation is mixed with anxiety. What if the older man is now, simply, terrible?

Imagine the relief, then, when the gleaming Holy Motors was wheeled out of the garage in Cannes, an ambitious, brilliantly bonkers shot-in-the-arm to the Competition. Carax may now be in his fifties, but he’s still making films like a young man desperate to explore and have fun with the medium. Thank God for a Palme d’Or contender who dares to be different.

A prologue features Carax himself navigating a surrealist dreamscape, at the end of which he looks down upon an auditorium, in which an audience sits impassively as Etienne-Jules Marey’s chronophotographed athletes flicker across a screen. The nod to that early pioneer signals the fact that cinema itself is a subject of the film. At the same time these still figures remind one of Last Year in Marienbad; and like the characters in that film, the protagonist of Holy Motors will be on an endless round of role-playing, in search of an identity.

When we first see him, Monsieur Oscar (Denis Lavant) is a well-to-do businessman, climbing into his stretch limousine and asking his driver (Edith Scob) about his appointments for the day. We imagine a dreary round of business meetings. But then he takes out a lady’s wig. And when the car parks, an old, decrepit woman climbs out and starts to beg on the streets.

Before we’ve had time to take this in, Oscar has changed costume again, into a motion-capture suit, in which he enters a studio and performs a series of energetic stunts, including a sensual clinch with a woman, their fully-clothed writhing transformed into the naked coupling of reptilian monsters. 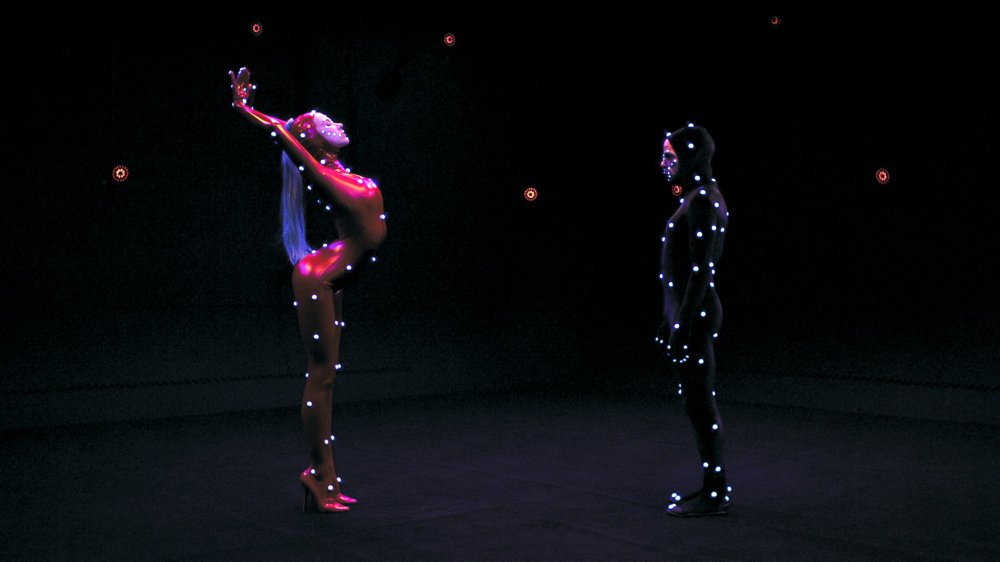 Oscar is a role-player, then, a master of disguise, performing for invisible cameras and for audiences who we can only imagine are enjoying an exclusive sort of pay-per-view. His other ‘appointments’ include a green-suited, lurching Leprechaun (Lavant reprising the monster from Carax’s contribution to the three-hander Tokyo!) who kidnaps a model (a seductively aloof Eva Mendes) and takes her into his subterranean lair; a killer whose victim is his splitting image; an angry father berating his daughter; a dying old man; and a man who goes home to his family, which happens to be a pair of monkeys.

That simian domesticity evokes Oshima Nagisa’s Max Mon Amour (1986), one of a number of references that will make this a cinephile’s wet dream. But it’s far from a dry exercise – seconds after Scob has donned her mask from Georges Franju’s Eyes Without a Face (1960), a fleet of limos start speaking to each other, in a totally unexpected homage to Cars.

It’s a hoot, but also mysterious and moving. Oscar is becoming exhausted by his characters, losing sight of his own identity. “Is it you?” asks Eva (Kylie Minogue), a fellow performer when they meet in the street. “I think so,” is all he can answer. Oscar also reminisces about the days when he could see the camera in front of him, at that moment conveying Carax’s own view as to how technology is damaging his art form.

Minogue has an on-screen charisma singularly lacking in fellow singer Pete Doherty, who has appeared here in Confessions of a Child of the Century. As for Lavant, well, he’s so multi-skilled and chameleon-like that he hardly seems human. Carax says, mischievously, that if the actor had refused the film he would have offered the parts to Lon Chaney or Chaplin. It’s a fitting compliment.

Sandrine Bonnaire’s Maddened by His Absence (J’enrage de son absence) is itself a tad maddening, an initially interesting and sober drama that slowly goes off the rails. William Hurt and Alexandra Lamy play a former couple who reunite eight years after the death of their young son, the pain of which led to their separation. She’s moved on, with a new partner and son; he has no one. But when he sees her boy, he becomes obsessed with the idea that they can have the father-son relationship he was denied before.

As a consideration of the variations of grief, this has some value; and Hurt conveys his character’s desolation with a rare intensity. But he can’t do anything about the preposterous plot development. Incidentally, Bonnaire shares a daughter with her leading man, and ex-lover; it’s grand to see them working together, but it’s not quite the reunion it should have been.

Next: Slow war cinema and Bollysploitation →