340 critics and filmmakers elect the greatest documentaries ever made: see their thoughts and choices. Plus: the new documentary wave, Laura Poitras and the dilemmas of independent journalism, the Dardenne brothers on Two Days, One Night, Kelly Reichardt on Night Moves and the critical genius of Raymond Durgnat.

In print and digital from 1 August. 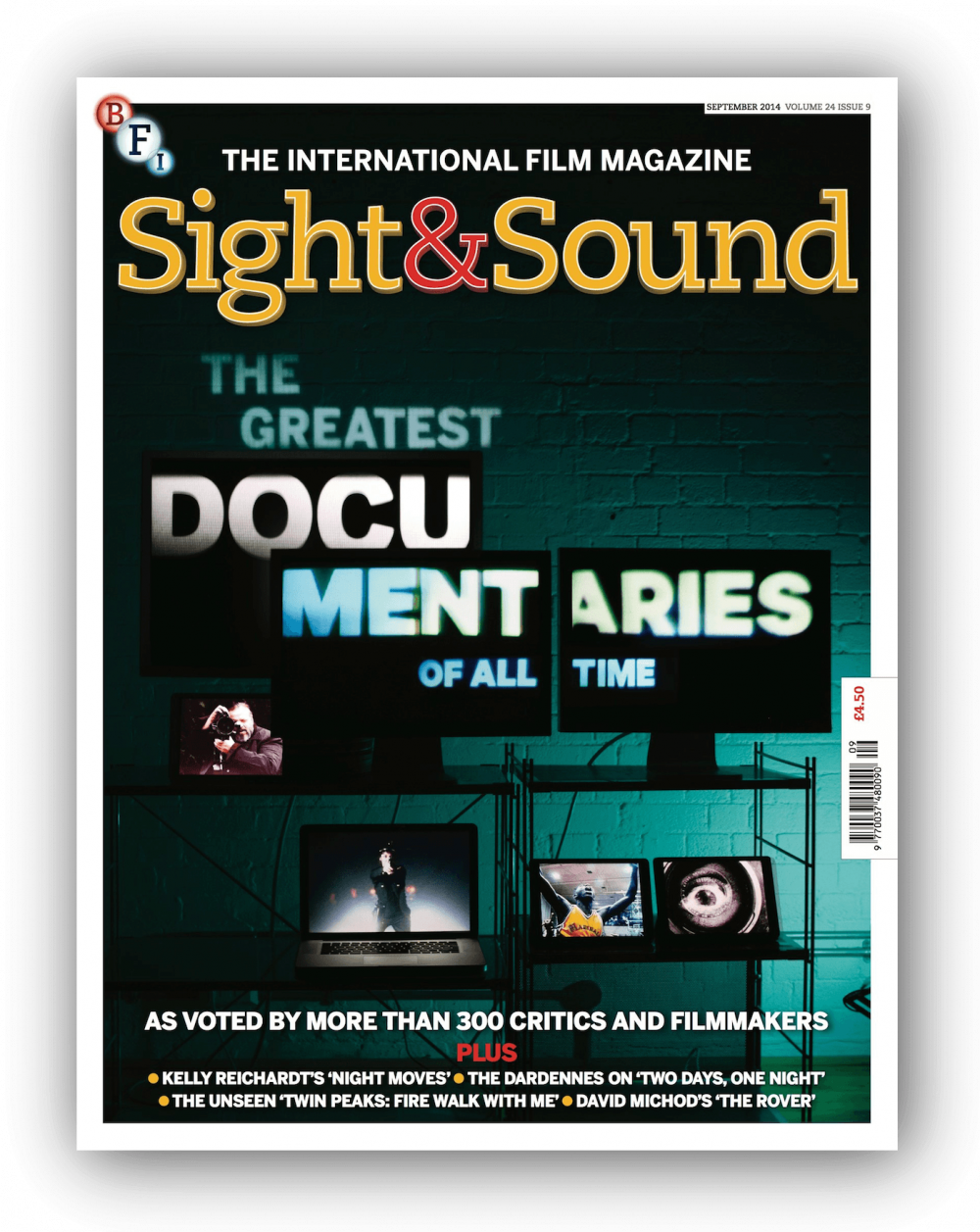 The new Sight & Sound documentary poll is the result of a “why didn’t we think of that before” moment. In the light of the amazing recent success and cultural impact of several nonfiction films, a group of curators, myself included, were chewing over what the BFI might do specifically for documentary films and television. It soon became obvious that we were not sure exactly what it was that we were trying to discuss.

I’m usually loath to do anything that takes lustre away from Sight & Sound’s ten-year poll of the Greatest Films of All Time but a new poll seemed to me the most obvious solution to getting a full view of the documentary canon. Approximately four months later I’m delighted with the quality of what more than 200 critics and curators – including many documentary specialists – and 100 filmmakers – the likes of John Akomfrah, Thom Andersen, Michael Apted, Clio Barnard, Sophie Fiennes, Amos Gitai, Paul Greengrass, José Luis Guerin, Isaac Julien, Asif Kapadia, Sergei Loznitsa, Kevin Macdonald, James Marsh, Joshua Oppenheimer, Anand Patwardhan, Pawel Pawlikowski, Nicolas Philibert, Walter Salles and James Toback – have come up with in terms of choices and commentary and I’m very proud of the team of advisors, BFI colleagues and S&S editors who have worked so hard to produce this poll edition.

What’s remarkable about the Top 50 documentaries list is that it feels so fresh. One in five of the films chosen were made since the millennium, and to have a silent film from 1929 at the top of the list is an absolute joy. That allusive essay films feature so strongly throughout demonstrates that nonfiction cinema is not a narrow discipline but a wide open country full of explorers. The current print edition of S&S contains only the highlights of our results; the real explorers among you will want to browse the full results and commentaries which goes live online on the 14th August.

What are the greatest documentaries ever made? Over the following 32 pages, we feature the votes of some of the 340 critics and filmmakers we polled in our search for authoritative answers. By Nick Bradshaw.

Plus: The new journalism

As traditional media back away from investigative reporting in the internet age, documentary filmmakers like Laura Poitras are stepping in to fill the gap – but can they survive without institutional cover?  By Charlotte Cook.

Plus: Flights of reality

The past 15 years have seen a sea change in documentary culture: filmmakers have grown more boldly adventurous as audiences have woken to the possibilities of the art . By Robert Greene.

A trio of green activists find themselves in deep water after plotting to blow up a dam in Kelly Reichardt’s environmental thriller Night Moves. The director discusses the meaning of radicalism and the dangers of ironcast moral certainties. Interview by David Jenkins, with an introduction by Nick James.

In 1963, as the auteurists were claiming ascendancy in the UK, critic Raymond Durgnat was swimming against the tide in the pages of Motion magazine, helping transform film culture his own way with his far-sighted advocacy of films such as Peeping Tom and Black Sunday. By Henry K. Miller.

Woman on the verge

Jean-Pierre and Luc Dardenne’s tense redundancy drama Two Days, One Night follows a factory worker’s attempts to persuade her fellow employees to save her job. The directors discuss the creative benefits of not giving a damn and why they can never resist the lure of long takes. By Isabel Stevens.

In the frame: Enigma variations

From the 50s to the 70s, some of Europe’s greatest directors courted the German artist Hans Hillmann to make posters for their films. By Isabel Stevens.

Object lesson: Under the skin

A medium that’s all about the flesh has found some peculiar uses for what’s underneath – make no bones about it. By Hannah McGill.

Gomorrah, Roberto Saviano’s book about the Neapolitan Camorra, already a hit on the big screen, is now Italy’s answer to Breaking Bad. By Pasquale Iannone.

Our idea of what counts as great nonfiction cinema is embarrassingly parochial. Maybe that is starting to change. By Mark Cousins.

Development tale: Hector and the Search for Happiness

How a Berlin-based producer, a Swedish writer and a British director took a globe-trotting French bestseller to London. By Charles Gant.

Brewster: Playing to the audience

Making films is one thing – getting the films to audiences outside London and the arthouse circuit is another. By Ben Roberts.

Bologna’s annual festival of the cinema of the past was a feast of gorgeous restorations and the paradoxically novel. By James Bell.

You, the jury: FID Marseille

FIDMarseille’s determinedly unorthodox approach to programming, and jury selection, helps it to punch above its weight. By Neil Young.

A new crop of truly independent young American cinema bristles with a defiance and hostility largely absent from the ‘indie’ scene. By Jason Anderson.

Skeletal strings, mournful cellos and weighty silence – plus ambient noise – help stake out the terrain of westerns about characters adrift. By Frances Morgan.

Ed Atkins’s increasingly fêted videos highlight the uncanniness of CGI creations while using digital technology against itself. By Melissa Gronlund.

All This Mayhem
The Anomaly
Art Party
Blood Ties
The Congress
Dawn of the Planet of the Apes
Delight
Deliver Us from Evil
Dinosaur 13
Finding Fela
Goddess
God Help the Girl
God’s Pocket
Goltzius and the Pelican Company
The Grand Seduction
A Haunted House 2
Heaven Is for Real
Humshakals
The Internet’s Own Boy
The Keeper of Lost Causes
Moebius
Mrs. Brown’s Boys D’Movie
Mystery Road
Night Moves
The Notorious Mr. Bout
Obvious Child
The Police Officer’s Wife
Pudsey the Dog The Movie
The Purge Anarchy
Seve
Tammy
Transformers  Age of Extinction
Two Days, One Night
The Unbeatables
Walking on Sunshine
We Gotta Get  Out of This Place
Welcome to New York
What If

Girl to the front: Rapture

John Guillermin’s rites-of-passage movie is a remarkable rediscovery – with a mesmerising performance from its young lead. By Trevor Johnston.

Another slice of cherry pie: Twin Peaks – The Entire Mystery

This comprehensive collection may not solve any mysteries – but it’s an undoubted treat for Twin Peaks devotees. By Kim Newman.

Gangster number one: Branded to Kill

Derided at the time of its release, Suzuki Seijun’s hitman noir now looks like a masterpiece from Japan’s first postmodern filmmaker. By Alexander Jacoby.

The Aesthetics of Shadow: Lighting and Japanese Cinema

Béla Tarr: The Time After

The Intelligence of a Machine

Errol Morris’s unravelling of a murder case starts off controlled and stylised – then the temperature drops from cool to chilling. By Michael Brooke.