From a whimsical French fantasy to an Italian political satire, a Fellini-inspired musical and two cult horror classics, the archive strand at this year’s LFF looks like a crowd-pleaser. But have our critics always been so keen? 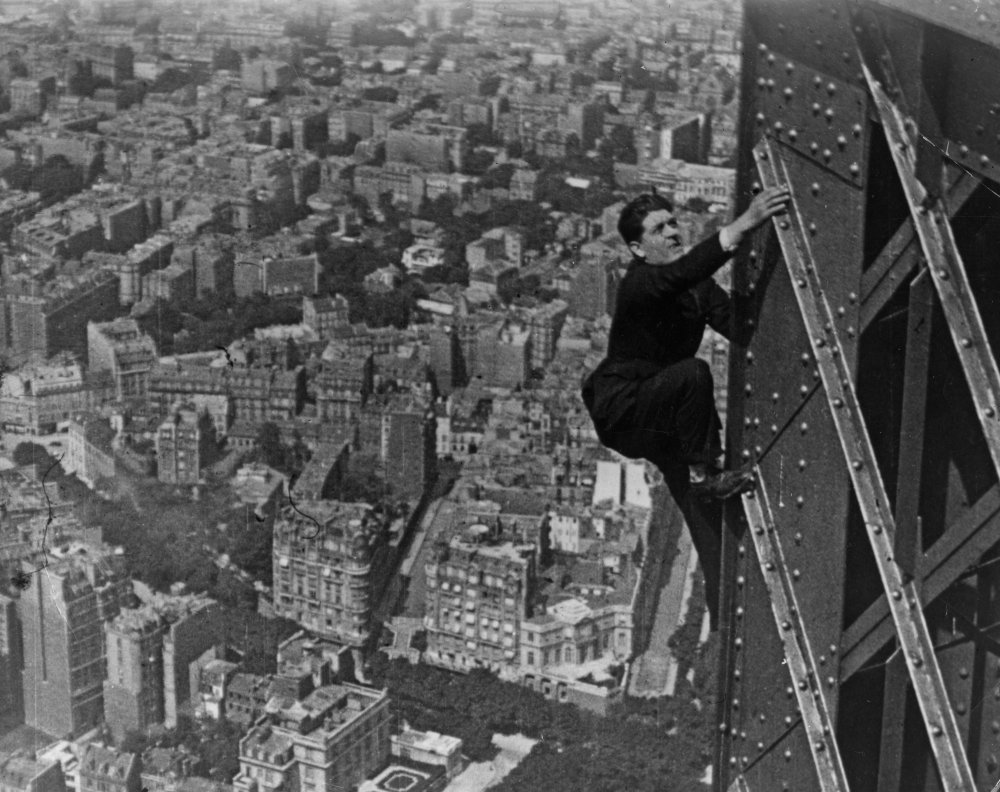 “A film about film, about the joy and possibilities of handling a medium which still seems fresh.”

Rene Clair’s first feature film, Paris qui dort reveals aspects of the director which tend to get buried in the genial exuberance of his more well-known sound movies. It is quite explicitly a film about film, about the joy and possibilities of handling a medium which still seems fresh, and it belongs to a period of artistic activity in Paris when, first with Dada and then with the Surrealists, writers, painters, musicians and designers were able to work together to revolutionary ends. With Clair, the cinema subsumes them all.

Taking up the science-fiction tradition of Verne and Wells, he shows their dreams realised: men do fly, time can stop. Paris is the monuments of the Second Empire and the International Exhibitions celebrating the progress of technology – but also a city transformed by the magical properties of the camera lens. The Eiffel Tower in close-up, viewed section by section, ceases to be the symbol of thrusting commercialism and becomes a pattern of criss-cross lines, an inexhaustible adult playground. Material objects, like clocks in the street or a radio loudspeaker, are seen in unfamiliar perspectives, and so seem to take on an altogether new significance.

But what really accounts for Clair’s excitement is that these things can be presented in an added dimension, that of the flow of time: Clair’s scientist only does imperfectly what the filmmaker can do fully, speeding time up, slowing it down, freezing it, reversing it; this, and the consequent revolution in the way we see and feel, is what Paris qui dort demonstrates with infectious enthusiasm, alternating frozen frames, slow motion and speeded-up action.

It is the director’s delight in the technical possibilities of the medium that carries this film: it is easy to see why Clair leaped into sound at the first possible opportunity, and it is understandable that after seeing Paris qui dort Dziga Vertov was in despair at having been pre-empted.

2. Masque of the Red Death

“A genuine chill of intellectual evil.” 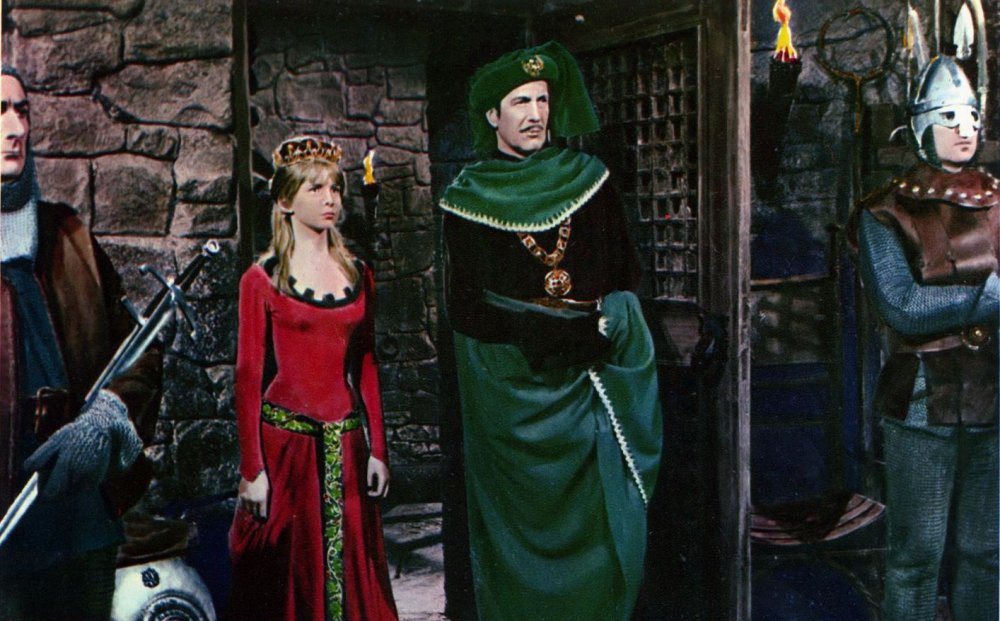 Unquestionably Roger Corman’s best film to date, The Masque of the Red Death has passages of such real distinction that one wishes he could be persuaded to take himself more seriously. Not, one hastens to add, that he should turn to more ‘serious’ subjects or stifle the bursts of sardonic humour which go hand in hand with Vincent Price, but rather that he should dispense with the crude shock effects which occasionally (notably in the dungeon scenes) mar a film which elsewhere operates on a much subtler level.

The first thing that strikes one about The Masque of the Red Death is that, apart from a rather scruffy opening sequence, it looks quite stunningly handsome. Here the colour is brilliantly sharp and clear, and Corman is just the man to make the most of the solid and exquisitely wrought sets and costumes permitted by a comparatively high budget, whether introducing the lovely mosaic flooring of Prospero’s castle in a reflective overhead shot as Vincent Price paces slowly across it, or dazzling the eye with sudden changes from white to yellow, purple and black by tracking Jane Asher as she wings through a series of four adjoining rooms, each designed in a different colour motif.

The Masque of the Red Death is graced by an uncommonly intelligent script which probes the concept of diabolism with considerable subtlety, even though the scenes relating to Black Magic (six minutes worth) have been cut out by the censor.

Where most films of this nature tend simply to pile on the blood, here there is a genuine chill of intellectual evil, because Vincent Price, initiating horrible tortures with a characteristic air of sadistic glee, also conveys a genuine philosophical curiosity as to the unknown territories into which his quest for evil may lead him. One readily believes in this world of Prospero’s, where good and evil are not merely empty words, but ideas to be tested and perhaps found wanting.

At times, in fact, the film reminds one of The Seventh Seal in its intellectual probings, in its figuration of Death, and, particularly, in the conception of the final sequence. After the great Masque (the film’s one real disappointment – the choreography is strictly conventional), one sits back to await the statutory scene reuniting the lovers after their adventures, only to discover with a shock of pleasure that Corman instead does the unexpected and rejoins Bergman for a scene in which the emissaries of Death gather to report on the plague’s devastations through the world. In the naming of the survivors, five of whom we know, the sixth being a strange, unidentified old man, is a touch of that imagination which breeds poetry.

“A powerful gift for conveying all the tedium and tat of purchased pleasure.” 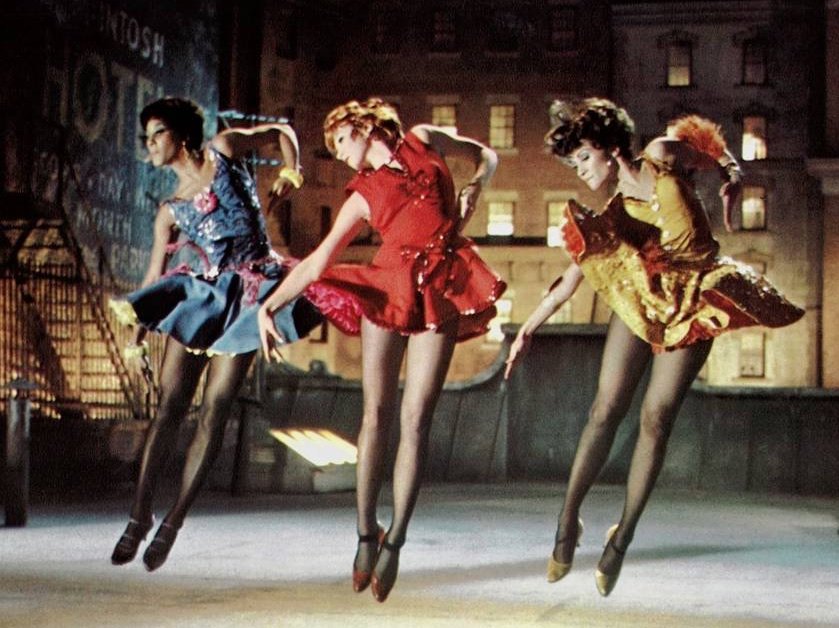 Choreographer Bob Fosse here follows the trend established by Gene Kelly and Stanley Donen to make his debut as a director. And although the success of Fosse’s Broadway production of Sweet Charity may explain the film’s subject matter, the choice of a Fellini film [1957’s Nights of Cabiria] as source material does seem to coincide with another emerging trend of the American musical, a move away from light-hearted, happy-ever-after frivolity towards a recognition of less cheerful realities.

Yet curiously enough, despite the strain on credulity imposed by the plot, Fosse’s film is at its best when its mood is closest to the Italian. He shares with Fellini a powerful gift for conveying all the tedium and tat of purchased pleasure, and his two most spectacular dance numbers – Hey, Big Spender sung by a menacingly inviting, obscenely postured line of tired chorus girls with painted smiles, and the Rich Man’s Frug performed with withering nonchalance in a higher class establishment – both suggest as potently as anything in La Dolce Vita the emptiness that lies at the core of any swinging city’s night life.

Shirley MacLaine performs the role with her customary galvanic kookiness and self-parodying waifishness – every inch an American Giulietta Masina – yet her strength and the director’s seldom coincide. She sustains the comicodramatic sections of the plot well, but not being primarily a dancer inevitably takes second place to Chita Rivera and Paula Kelly in the major dance numbers; whereas when not treating his audience to a cartographic tour of his star’s mobile face, Fosse often appears to be treading water between one production number and the next.

His abundant use of frozen frame shots, zooms and slow dissolves heightens the film’s already slightly theatrical flavour; and despite the exciting New York locations, several fine performances and the magnificent precision of the choreography, one is left with the impression of several splendid but essentially disjointed scenes connected only by formal editing devices.

At the heart of Fellini’s fairy tale there is a very soft centre, but it is in delineating the hard edges that Bob Fosse’s considerable talents as a director lie. 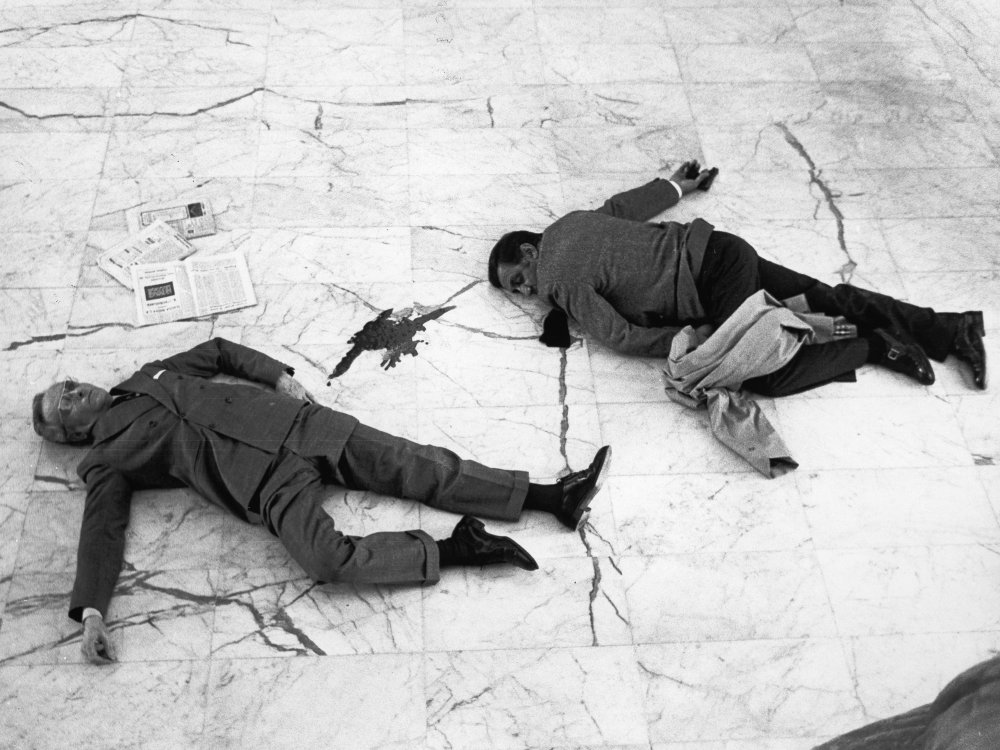 Nothing is so impressive in Illustrious Corpses, Rosi’s latest essay in political conspiracy theory, as the way it looks. In place of the journalistic roughness, drive and urgency of The Mattei Affair, this film has the air of a pageant – a mythically foreboding, politically obscure spectacle which seems, with dreamlike inevitability, to be unfolding some secret process in the affairs of men. What makes that process appear so ineluctable yet so indefinable – and testifies simultaneously to Rosi’s powers as a stylist – is its ability to compel belief that everything on the screen, not just the people but the landscapes and architecture they inhabit, have some assigned role in the grand design.

The film’s peculiarly bleached appearance, which drains away any strong colours but seems to highlight qualities of design and texture, conspires to suggest secret affinities which together make up the totalitarian style of whoever is stage-managing such diverse events as the assassination of high officials, garbage men’s strikes, demonstrations by young Leftists, and finally the disembodied roarings and clankings which come to afflict the System’s paranoid victims.

It is this sinister interconnectedness which Rosi’s highly controlled method conjures up, most complexly when it involves an intersection of styles, the old and the new (usually old ideals and new corruptions), as in the final assassination in a gallery full of classical Greco-Roman sculpture, or the pompous funeral oration and procession for the first murdered justice that take place in an old city square dominated by heroic statuary.

Where the myths of the American hero are skittled one by one in The Parallax View, Illustrious Corpses tilts at the awesome panoply and impartial wisdom of the law. 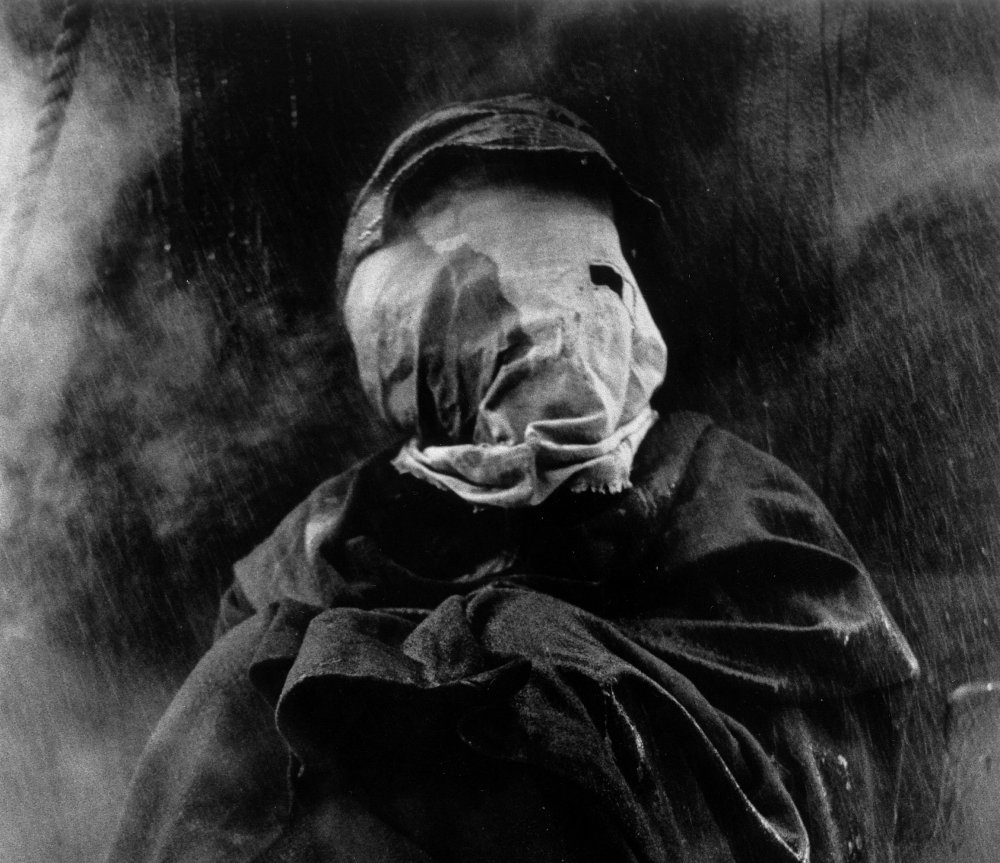 “composite image of the Victorian world as a rude machine”

The Elephant Man is a fascinatingly hybrid – not to say dialectical – piece of movie-making, which fairly unequivocally answers the question of how an independent talent capable of an unclassifiable horror like Eraserhead could adapt to a big-budget horror, being promoted as “a true story of courage and human dignity”.

In theory, the outlandish ectoplasmic fantasies of his first film should make David Lynch an interesting choice of director for the story of the worst recorded case of human deformity. In fact, as the film settles down in its middle stretches for careful period recreation (with attendant cameos from British stage and screen), allowing the audience to adjust to John Hurt’s grotesque make-up as a naturalistic given and to appreciate that, underneath, the character is one of us, it might seem that there would have been little difference if the project had gone to Stanley Kramer.

One thing he does not do is to set the record straight on the actual case history. In fact, the only explanation offered by the film, in its first moments, is a combination of mysticism and old wives’ tale, though it is the one advanced by Merrick himself in his autobiographical fragment: “…my mother was going along the street when a procession of Animals were passing by, there was a terrible crush of people to see them, and unfortunately she was pushed under the Elephant’s feet which frightened her very much; this occurring during a time of pregnancy was the cause of my deformity.”

The above scene took place in Leicester, which is not exactly suggested by the exotic atmosphere as a herd of pachyderms trumpets mistily through the opening of The Elephant Man. But Lynch immediately converts this geographic licence into something even more floridly expressive: images of creation, a cosmos emerging from earth, air, fire and water, which is abruptly replaced by a caricature of the Victorian cosmos as young surgeon Frederick Treves wanders through a fun fair and freak show, following a worried policeman through womb-like corridors of canvas to the Elephant Man’s enclosure.

If this already sounds more Corman than Kramer-inspired – carnival exhibitionism as the natural medium of scientific curiosity and visionary mysticism – Lynch proceeds brilliantly to extend its implications to his period scene-setting, intensifying the cold, harsh imagery with a cacophony of noises off (furnaces, gas fires, etc.) which turn the cosmos into some awful industrial creation. The composite image of the Victorian world as a rude machine, just beginning to understand and flex the forces it has tapped, seems an apt enough context for its fascination with Merrick and the riddle of existence he poses – and even implies something Frankenstein-like in the way Treves pauses in his surgical labours over a workman horribly injured by machinery to begin grappling with that riddle.